Read Meet Me in Gaza Online

Meet Me in Gaza 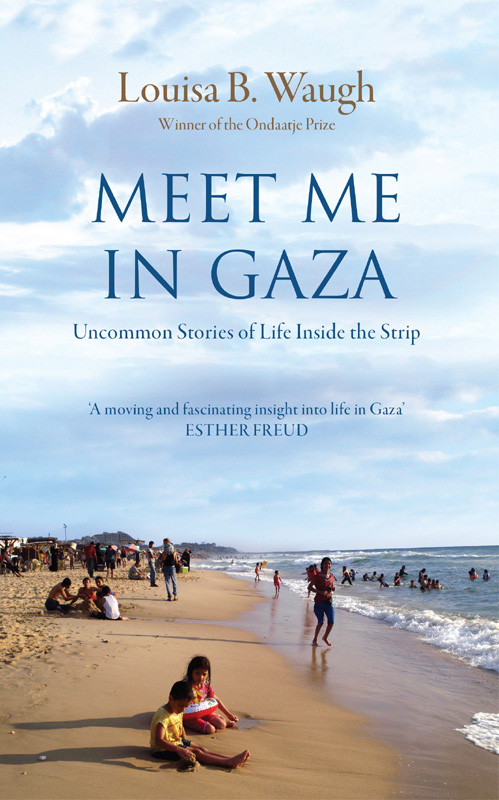 MEET ME IN GAZA

Uncommon Stories of Life inside the Strip

Praise for
Meet Me in Gaza

‘This book penetrates the surface, the dismal images that we have become all too familiar with from news coverage of the Strip, to reveal the more human face of the place, that few have been able to experience let alone describe. Unlike any other book about Gaza, this will please, educate and inspire. It is vividly written and is infused with a love of life that the author has exhibited in all her previous writing.’

‘Not many of us would have the courage to lay ourselves on the line and go and live in the Gaza strip. Louisa Waugh shows her extraordinary credentials for this courageous undertaking: a deep wellspring of human warmth, a tenacious ability to find the tiny spark of joy in the most dismal surroundings, an incontrovertible honesty, and then the eloquence to tell us the story and make us understand. She treads a steady line of reason through all the absurdities and horrors she encounters, and comes up with a tender portrait of beleaguered humanity.’

Chris Stewart, author of
Driving over Lemons: An Optimist in Andalucia

‘Powerful and deeply heartfelt, Louisa Waugh has succeeded in showing us the true face of Gaza. We encounter Palestinians in their living rooms, at work, in cafés, and at parties and weddings ... I urge everyone to read this.’

Izzeldin Abuelaish, author of
I Shall Not Hate: A Gaza Doctor’s Journey on the Road to Peace and Human Dignity

even the foreigners are escaping!

Gaza from the air

great night for a party!

why no one visits the Swailams

Catherine and the Tulip

shortly before six in the morning

pleasure at the weekend

of all the ports

Muhammad and all the things he might have done

the same but now different

chance of rain: zero per cent

the Wadi of Pleasure

dunam
– a dunam is equal to about 900 square metres

haram
– from the Arabic word for sanctuary, means something forbidden, but Arabs use it very casually, to express shame or pity

Iftar
– the breakfast meal eaten after sunset during Ramadan

Nakba
– lit. ‘Catastrophe’ (used by Palestinians to refer to the loss of their land and the establishment of the state of Israel in 1948)

zift
– lit. black tarmac; also used for something that is really bad

‘
Habibti
[my dear], this place Gaza is like an ancient
rock star. He has all these scars from his many battles:
his friends are bad, his enemies worse – he’s always in
trouble … But the stories he can tell!’

The beach is quiet. Most of the tables and chairs have been packed away, the umbrellas folded. The carousel has just been turned off. The humid heatwave of summer has cooled a bit and now the air’s soft and warm, tinged with salt. I pass a posse of kids shrieking with joy as they splash about in the shallows. A few young men stand waist-high in the waves, their shirts stripped off and wet skin slick, bathing their horses in the healing salt water. One of them catches my eye and winks. When I wink back, he raises his face to the sky and roars with laughter.

I am weary as an insomniac, but still need to walk. I’ve been in northern Gaza all day, interviewing parents. Some wept while telling us about their kids; others just stared blankly at the walls and spoke in dull monologues as if they were trapped in fog. After a day like this, the beach is my sanctuary. I don’t have to talk or listen to anyone here, just to the waves. I stoop and unbuckle my sandals, looping my fingers through the straps so I can carry them in one hand, then straighten up, exhaling slowly. It feels so different standing on the beach in bare feet, the soft grit squeezing between my toes. Small pleasures matter.

There are no clouds, just clear sky and a blue sparkling tide. I can see a couple of small boats bouncing through the waves. Most fishing boats here are small; the local fishermen only scrape a living from the sea, but can’t imagine doing anything else. If you stroll quietly around the old port, sometimes you hear them before you see them, singing softly as they squat on the quayside stitching their nets. Gazans are salty people – and not only the fishermen.

I wander away from the city, heading south, the roll of the waves lulling me into a pleasant haze. I pass a young couple strolling close together. His open-necked white shirt looks comfortably loose and though she’s completely swathed in black, including a black face veil, she’s walking barefoot like me – and they’re holding hands. Quite daring that, for a
munaqaba,
or veiled woman. She and I both look back slyly and I can just see her brown eyes smiling. Up ahead a family perch on plastic chairs round an empty café table and a few solitary men are loitering, as usual. One stands erect as a statue, staring out at sea. Another, with a thick beard and legs like a spider, is cushioned in the sand, so lost in his thoughts or dreams he doesn’t even notice me walk past.

I have no watch and my mobile phone is switched off, so I guess the time by the sun. When it is poised, molten, just above the horizon, that’s my cue to start heading home. Just about to turn around, I notice two men right ahead of me, wading out of the sea. The younger one is lean and athletic-looking, his shorts plastered to his skin. The older guy has a full grey beard and he’s wearing a black-and-white striped costume that stretches from his broad shoulders almost to his knees, like a Victorian bather. I realise that I’m staring at them, so I turn on my heel and start walking away. But they’re laughing so playfully I can’t help myself, and glance back over my shoulder – just in time to see the older bearded guy leap up into the air, arc into a graceful backward somersault and land perfectly light and steady on his feet.

His younger friend cheers out loud, then casually flips forward, somersaulting onto the wet sea edge light as a cat. I stand rapt, my mouth open like a fish. The older guy wades back into the water, carefully rinses his hands and pauses, gazing into the sunset flames. His friend takes off, jogging loose-limbed along the shoreline. I take off too and grin all the way home. Another small pleasure.