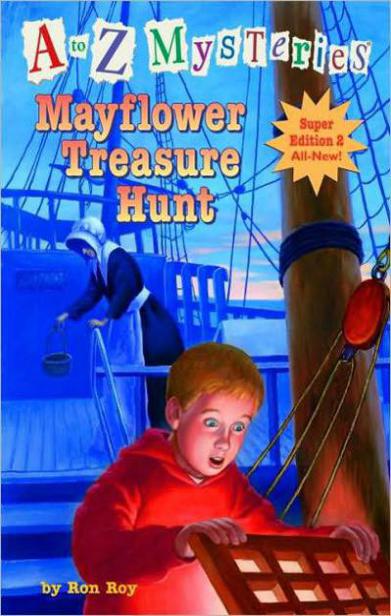 Dink, Josh, and Ruth Rose aren’t the only kid detectives!

Can you find the hidden message inside this book?

There are 26 illustrations in this book, not counting the one on the title page, the map at the beginning, or the picture of the missing necklace that repeats at the start of many of the chapters. In each of the 26 illustrations, there’s a hidden letter. If you can find all the letters, you will spell out a secret message!

If you’re stumped, the answer is on the bottom of page 118.

This book is dedicated to my nephews Bob and Bobby,
and my niece, Desiree.

Josh peered inside the deep, dark oven. “Wow!” he said, backing away. “It smells like bacon in there!”

A tall man standing next to Josh laughed. “Aye, son, we roasted a pig for the tourists this past Sunday.” The man wore baggy pants, a navy blue shirt with a white ruffled collar, and boots. He had dark curly hair and a thick beard.

Dink, Josh, and Ruth Rose were inside the cook room on board the
Mayflower II
, in Plymouth, Massachusetts. This ship was a replica of the original
Mayflower
, which brought English
passengers to Massachusetts in 1620.

The kids’ families had decided to have this year’s Thanksgiving meal here, in the town where the first
Mayflower
passengers had landed. Dink’s mother had driven the three kids to the historic town. Everyone else would arrive tomorrow, the day before Thanksgiving.

Dink’s mother was spending the day with an old college friend who lived a few miles away. So the kids were on their own until she got back at five o’clock.

Ruth Rose had bought a guidebook. Inside were pictures and information about the
Mayflower
and other sites in Plymouth. She turned to a page that showed an inside view of the
Mayflower.
“Is this where the
Mayflower
passengers did all the cooking?” she asked.

“Aye, most of the meals were prepared here in the galley by the boat’s
cook, lassie,” the man said. “But a few of the women brought their own small iron stoves. They lit them on deck to cook stew or soup or porridge for their children.”

A few other tourists were exploring the boat. Workers, dressed the way the Pilgrims had dressed, were stationed around the decks to explain things to the visitors. In fact, the workers were all actors pretending they had just arrived aboard the real
Mayflower.
They could even speak the way the original passengers spoke.

Dink looked around the small, dark galley, or kitchen. He was amazed that food for over a hundred people was cooked in this tiny, cramped space! Of course there was no refrigerator or stove. Just this dark oven made of bricks, a small worktable, and a couple of crude benches.

It was a mild week in late November. Dink, Josh, and Ruth Rose wore sweatshirts and jeans. Ruth Rose’s outfit was all blue. She liked to wear clothes that matched. Even her headband matched her sneakers!

“Where did the passengers sleep?” Dink asked.

The man pointed down a narrow set of stairs. “’Tween decks, down those stairs,” the man said. “Careful as you go!”

The kids walked down the stairs, holding on to a rope that had been attached to one wall. A woman in a long purple dress stood at the bottom. She wore a tight white hat that covered her hair. She smiled at the kids.

“Yes, this is where we slept and lived for nearly ten weeks—and crowded it was!” she said.

The room was narrow and dark.

There were a few small openings high on the walls for light and fresh air. A mattress lay in one corner, and a couple of wood sleeping platforms had been attached to one of the walls. The kids checked out a row of hammocks that were strung up along one side of the space.

“Didn’t everyone get a mattress?” asked Josh.

The woman shook her head. “No. A few of us had mattresses stuffed with straw,” she said. “Some slept right on the wood floor. I slept in a hammock.”

“It
must
have been crowded,” Ruth Rose said. “I read that there were over a hundred passengers!”

“Yes, and about thirty crew,” the woman said. “’Tween decks here ’twas crowded and smelly. The rats would come around looking for food. We’d feel them at night walking over our beds.

Many of us got sick, and one passenger died.”

Dink noticed clay pots under some of the hammocks. He knew from his reading that these were called chamber pots. There were no bathrooms on the
Mayflower.

“Did you bring furniture and stuff with you?” Dink asked. He was trying to imagine what it would be like to live in this dark room for more than two months!

“Aye, some did, but it was kept down below in the hold,” the woman said. She pointed to a wide opening cut into the wood deck. The dark hole was covered by a grate. It looked like the grates that cover street sewers, only bigger. Dink peered down through the grate slats. He could see a large pile of straw-filled mattresses.

“Everything we brought was kept
there—clothing, furniture, keepsakes,” the woman went on. “We were not allowed to touch our things during the crossing.”

“Why not?” asked Ruth Rose. “What if you needed more clothing?”

“Thievery is why not,” the woman said, shaking her head. “The boat master was afraid we’d steal each other’s things, so the hold was off-limits.

“Still and all, items were stolen. My friend Emma Browne had her jewelry-taken. She had packed it with her belongings down there. When we reached land and were allowed to see our possessions, dear Emma’s necklace was gone. Emma cried for a week. She said it had belonged to her grandmother.”

“Did they ever find out who took it?” Josh asked.

The woman shook her head. “No,
but we all think it was that Lawrence Mudgett, a crew member,” she said. “He was in jail in England before the crossing. Oh, he was a mean ’un. Mudgett used to kick the dogs and the children if they got in his way. All the passengers hated and feared him. Aye, Mudgett is the
Mayflower
thief!”

“There were dogs on the
Mayflower?”
Josh asked.

“Aye, two, and a few cats. They helped by eating the mice and rats,” the woman said. “Other animals came across with us. Chickens and geese for eggs, and pigs and goats for their meat. We kept some alive so we’d have livestock once we landed.”

More tourists were coming down the stairs, so Dink, Josh, and Ruth Rose explored the rest of the boat. They talked to more workers, all dressed in costume and speaking with British
accents. As the kids were leaving the ship, they were stopped by a man wearing baggy black pants and a tight-fitting black jacket. His hat was black, too, showing off his ruffled white collar and white beard.

“Did you enjoy the tour?” the man asked. “I am the boat master, what you Americans call the ship’s captain.”

“This boat is awesome!” Josh said. “But I don’t think I’d want to live on it like the Pilgrims did!”