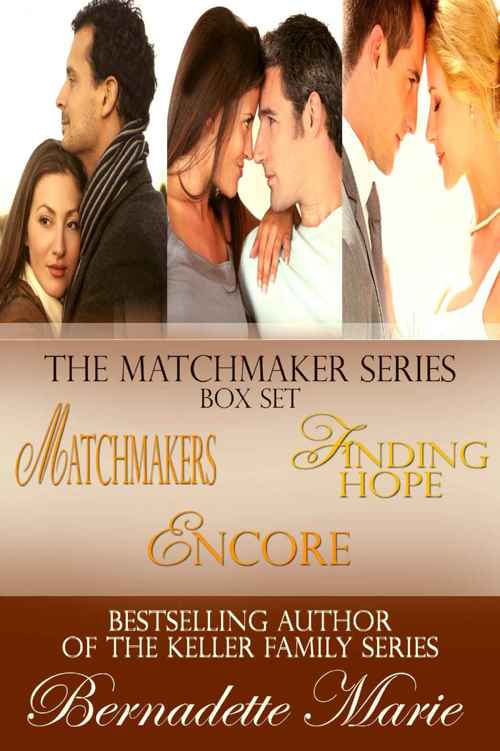 This is a fictional work. The names, characters, incidents, places, and locations are solely the concepts and products of the author’s imagination or are used to create a fictitious story and should not be construed as real.

All rights reserved. No part of this book may be used or reproduced in any manner whatsoever without written permission, except in the case of brief quotations, reviews, and articles. For any other permission please contact 5 Prince Publishing and Books, LLC.

When my belief in myself falters, yours never does.

Matchmakers, Encore, and Finding Hope
were my first three published works. The trials that these three books have gone through are enough to write a book about!

I have compiled them all together in this set for your enjoyment!

Matchmakers
is a wonderful story proving that love can come full circle even when feelings get in the way.

Encore
is a beautiful story about accepting who you are and where you came from.

Finding Hope
proves that when you least expect to find love you might be lead right to it.

Sophia filed off the airplane along with the other groggy passengers. The red-eye flight to Kansas City had knotted up her stomach. What in the hell was she doing back here?

Perfect persuasion and just the right amount of guilt had gotten her on that plane. Perhaps the tightening of her stomach wasn’t the flying—it could very well be that she’d returned to the very place she’d run from ten years ago.

She’d run from a man and shattered the hearts of people she loved. The guilt stung a little deeper. She should have come home years earlier.

Sophia followed a small group of women from the plane into the ladies’ room. Exhaustion weighed down her shoulders. Within the hour, she’d be at her grandmother’s house, tucked into her childhood bed, and asleep. In the meantime, she splashed cool water on her face to keep herself alert.

She dried her face and hands and adjusted the scarf at her neck to ensure it hid the secret she kept from the world. She picked up the carry-on luggage at her feet and headed toward baggage claim.

The husky voice was soft and male and made her knees weak when she heard it. She knew that voice as well as she knew her own. The knot in her stomach returned, but this time it was like a fist in her gut.

She turned to see him standing there in his pilot’s uniform with his suitcase at his side—David Kendal, the very man she’d run from so many years ago.

He took his pilot’s hat off and revealed the dark, wavy hair that she’d once run her fingers through. It was now speckled with hints of sophisticated silver. His uniform was striking on him—just as it had always been. Even in the early morning hour, she felt her skin tingle when she looked at his broad shoulders and knew what it was like to rest her head against his chest.

“David.” His name floated from her lips in a sigh. Ten years had passed since she’d last laid eyes on him, and now he was as large as life standing before her.

“I thought that was you on the plane.” He was walking closer to her, and her trembling knees wouldn’t allow her to run the other direction.

The scent of his cologne washed over her. His dark eyes were smoky and wide as she watched him take in the sight of her.

“You look wonderful.” He stepped closer, and Sophia gripped her bag tighter and tried to swallow the ball of fear that had lodged in her throat. He gripped his hat tighter. “I’ve been following your career.”

“Really?” The muscles in her shoulders tensed. “Why?”

“Why?” He chuckled and took one more step closer, and her throat constricted. “Sophia, you’re…” He shrugged as though brushing off a thought. “You’re very talented.”

Sophia shook her head, trying desperately to remove all thoughts of him from before—of what she’d lost. She sighed. “David, it was nice to see you. I really need to get my luggage.”

She turned from him, head up, shoulders back, and strode toward the elevator, stepping in as the door closed. She leaned her head against the back wall and closed her eyes.

How was it possible that after ten years he could stir such feelings in her? Sophia took inventory of what she was feeling. There was a surge of attraction between them. Then the anger she’d felt for years accompanied the thought of him. She’d walked out on him. His betrayal was much stronger than the attraction. It had given her purpose to make something of herself. Her success as a concert cellist sprang as much from her desire to succeed as it did from a need to escape her feelings for David.

Sophia opened her eyes when she heard the elevator doors open. The small group of others who had been aboard the plane with her stood watching the empty luggage carousel go around. Sophia waited for her cello case to arrive in the oversized luggage. It killed her to have to check the instrument, but there were no other choices. It was times like this she wondered why she didn’t play the violin. She could carry that onto the plane.

Relief flooded her as a man brought her the case. She quickly opened it and examined the instrument to assure herself it had arrived in one piece.

Her trip was to last two weeks. She’d wanted to pack only one bag, but against her better judgment, she’d packed two. When the two suitcases dropped to the carousel, she pulled them off and stacked them. One hung from the other, and she slung her carry-on over her shoulder. With a grunt, she hoisted her cello to her side. She started toward the curb to collect a cab.

Footsteps clattered on the tile floor behind her.

She wouldn’t let herself turn to see him hurrying to her.

“I travel like this all the time. I do not need your assistance.” Her voice was cold.

“I wouldn’t be a gentleman if I didn’t offer to help a lady in need.”

“A gentleman?” He’d already taken her suitcases from her and wheeled them out to the sidewalk. “Mr. Kendal, I assure you I do not need you.”

“No, you made that perfectly clear when you disappeared and left your engagement ring in the sink.” He kept walking, forcing her to follow.

“Where are you going?” She tried to keep up with him, but his long stride kept him a hefty distance ahead of her.

He pointed off into the parking garage. “My car is parked just over here.”

“I don’t want you in a cab in the middle of the night,” he said, unwavering from his path.

She grunted and quickened her step again.

“I don’t care what you think—”

“I know.” He darted a stare in her direction.

“You don’t even know where I’m going.” She finally closed the distance between them and walked side-by-side with the man who had captured her heart for years. She despised him for it.

He pushed the button on his key and the lights on the Toyota Camry lit up. “Your cello should fit in the backseat,” he said as he hoisted her luggage into the trunk with his own.

Sophia shook her head and opened the back door. She gently laid her cello case across the seat. David shut the trunk and slid past her to open her door. Her breath hitched as the air stirred from his presence.

“Thank you.” The words left her mouth without the softness the sentiment should have had.

She dropped into the seat. He winked and shut her door before walking around to the other side of the car.

“Did you know I was going to be on that flight?” She wondered if she was a victim to a vicious plot to make her face him.

“No.” The dip in his voice made her understand that he, too, was disappointed in whatever was going on.

“But you’ve talked to my grandmother enough to know I’d be here?”

“You forget who her roommate is.” He smiled as he drove from the parking garage. “Those two women never stop talking.”

“So, how is your Aunt Millie?” She adjusted the scarf at her neck as she peered out the window, awaiting his answer.

“She’s fine. She’s very happy to be with your grandmother again. You’d think by the way those two carry on that they were little girls and not the eighty-four-year-olds that they are.”

“Eighty-three. They won’t be eighty-four until next week.”

“And that’s why you’re here.” He started up the ramp to the highway.

“Of course. She wants a birthday party. I’m going to make sure she has the best one.”

He laughed as she leveled her glance at him.

“Those two will never change. You do realize they’ve been planning this party for a year. It’s all planned out, but I think you are
their
guest of honor.”

She shook her head. He had no idea what he was talking about. She’d settle into her grandmother’s house, and in the morning, they’d have a long talk. If having David at the airport was another attempt at their matchmaking, Sophia wasn’t interested.

“So, you still live in Kansas City?” she asked, watching familiar landmarks pass in the darkness.

“This is home.” He turned off the highway and headed down the streets toward her grandmother’s house. “What about you? Where do you call home now?”

“My apartment is in Seattle.”

It wasn’t until they headed down the very street where her grandmother lived that Sophia asked, “How is your daughter?”

The words themselves hurt.

“I’m sure your hands are full with her now.” The comment sounded snide, though she hadn’t meant it to be.

“She’s a good kid. She gets straight A’s, she’s employee of the month, and a volunteer at the nursing home. She was just elected to the student council, too.”

“She makes you very proud.” There was a stabbing in her chest and a quiver in her lip. Jealousy was ugly when it reared its head, and she hadn’t known she’d still feel it so strongly. Her eyes misted, but she kept them diverted out the window and batted the tears back.

“I’m very proud of her,” he said. “You know that her mother left us…left her with me, that is.” He slowed the car in front of her grandmother’s home. “That was hard on her.”

“Sophia, you can’t blame Carissa for what happened to us, if that indeed is what you’ve done.” He pulled the car into the driveway and put it into park.

“I don’t.” She finally turned toward him and looked him in the eye. “I blame you. I completely blame you. Thank you for the ride.” She put her hand on the door to open it, and he caught her other hand in his.

“Sophia, why did you leave?” By his grip on her hand, she knew he’d waited ten years to hear her explanation.

The emotions of the day she’d left flooded back at her, slapping her in the face and squeezing her heart. She hadn’t expected to see him today. She hadn’t had time to think things out.

She extracted her hand from his and opened the door. She pulled the cello from the backseat as he lifted her suitcases from the trunk and then guided her toward the back porch.

“Why are you going this way?” she whispered, knowing the occupants of the house were asleep.

“Miss Katie doesn’t like us to use the front door at night.” He took his keys from his pocket and unlocked the door.