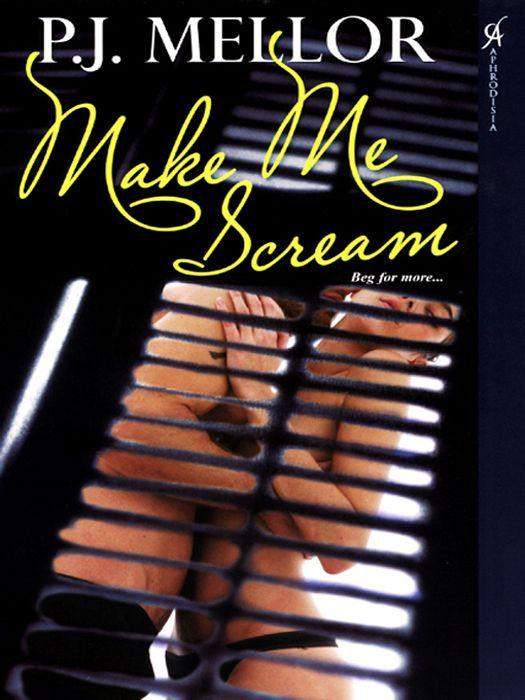 THE COWBOY
(with Vonna Harper, Nelissa Donovan and Nikki Alton)

THE FIREFIGHTER
(with Susan Lyons and Alyssa Brooks)

As always, special thanks to my wonderful editor, John Scognamiglio—it’s taken me a while, but I can now not only pronounce his last name, I can actually spell it!

Thanks, too, to my husband, Michael, for taking on laundry duty while I write. Good job, babe!

And thanks to my martini lunch bunch—you know who you are!—for listening to me whine and helping me brainstorm, even if sometimes it was more like only a drizzle.

The PI hero of Devon’s book had just discovered the lead witness for the crime family hiding naked in his bed.

The woman stroked my impressive erection.

“Are you going to kick me out?” the buxom blonde asked with a sultry pout.

“Something just came up,” I replied.

“I can help you with that,” she whispered, stroking my length.

“Put your mouth where your money is,” I hissed in a breath when she took my advice. Her mouth closed over me, practically swallowing me whole.

Okay…now what? The flashing cursor on the screen of his laptop mocked him.

Out in the courtyard of the little beachfront apartment community he managed as his day job, voices rumbled. His fellow tenants were starting their nightly celebration early.

Above the laughter and conversations, a deep bark sounded, followed by the shrill voice of his neighbor, Francyne Anderson. Devon’s mouth quirked. Petunia, Francyne’s one-hundred-and-fifty-pound rottweiler, must be joining the party tonight.

Deliberately shutting out the noise in the courtyard, Devon narrowed his gaze at the flashing cursor.

“C’mon, Mac, be brilliant. What would Trent say?” Trent was the hero of his work-in-progress,
Darkness Becomes Her
. A PI with the prerequisite heart of gold, Trent not only got all the bad guys, he got all the girls.

Devon sighed and rocked back in his desk chair. Maybe that was the problem with finishing the book. Trent had scored approximately every five to seven pages. He, Devon, hadn’t been laid in months. Heading way too close to being a year. He didn’t have the time, which made him an even more pathetic loser. Who doesn’t have time for sex?

Voices rose in the courtyard.

Him, that’s who didn’t have time for sex. Devon Edward McCloud. With working on his novels by night, writing catalog copy for sex toys by day—which oddly did not help his lack-of-sex problem—while attempting to maintain some sense of normalcy with the rowdy tenants of the Surfside Villas apartment complex, who had the time or energy for sex?

Male laughter vibrated his walls. Opportunity wouldn’t hurt either. Of the eight apartments in the old complex, five were occupied by men (six, counting himself), the seventh occupied by a female at least eighty if she was a day. And one vacant unit. Not a lot of opportunity.

He’d just returned to the seedier side of his imagination when a knock sounded on his door. Judging by the lightness of it, his deductive reasoning told him, it was a female knock. Since Francyne never knocked, it could mean only one thing: someone inquiring about the vacancy.

He growled and saved his work before closing his computer. Obviously the intruder could not tell time. The sign on his door clearly stated office hours. Said hours ended—he glanced at the old school clock on his wall—almost two hours ago.

He threw open his door.

The short, blond woman in a denim miniskirt and yellow tank top hopped back with a squeak.

“Yes?” No point in being polite. Once Blondie got a look at the group sitting around the fire pit in the courtyard, she’d realize this was not the place for her.

She swallowed and licked soft-looking pink lips. “Is—is…I mean, are you the manager, the person I need to see about renting an apartment?”

He turned to look meaningfully at the manager sign on his door. “Looks like it, doesn’t it?” He tapped the posted hours. “But I’m closed. Office hours don’t start again until nine tomorrow morning. Come back then, if you’re still interested.”

“But I need a place tonight!”

He paused midslam. “Try a motel.”

“They’re all full. At least, all the close ones.” She looked down at her painted toenails peeking out from a pair of ridiculously high-heeled sandals.

He tried not to speculate how short she would be without the heels. He tried not to notice her Barbie-doll build. He also tried not to appreciate the way the firelight from the courtyard played in the silky strands of her blond hair. He failed miserably on all counts.

She looked back up at him, and he forced himself not to break eye contact with her baby blues. She blinked, her long eyelashes creating spidery shadows on her smooth cheeks.

“Please?” Her shiny lower lip gave the faintest of quivers.

“Fine.” He spouted off the price of rent, and she nodded. “Don’t you want to see it first?”

He nodded, sure this was a very bad idea but at a loss as to how he could turn her down. Her resulting smile sent a flash of awareness streaking through him. Or…did men have hot flashes?

He cleared his throat and stepped back, opening the door wide. “Okay, may as well come on in and get the paperwork out of the way so we can all get some sleep tonight.”

“Jamie Cartwright,” Blond Barbie said as she stepped in, extending her hand.

A low growl emanated from behind the recliner. “Killer!” he warned, glaring at the pair of glowing eyes visible from below the edge of the chair.

The woman gasped and jumped back, eyes wide, hand at her throat.

Reality dawned. “No! Not me,” he explained, pointing to the eyes. “My dog. That’s his name. Killer. I’m Devon. Not Killer.” He forced a smile. No one would guess he worked with words for a living. He shoved his hand toward her. “Hi.”

She took a tentative step forward and allowed him to shake her small hand. “Hi.” She looked in his dog’s general direction. “What kind of dog is Killer? Is he dangerous?”

“I’ll let you be the judge of that.” Grinning, he slapped his thigh.

After Devon-not-Killer released her hand, Jamie edged toward the door. Did she really want to rent a place with a killer dog in residence?

At that moment, a ball of white fluff pulled itself out from under the dark leather chair to prance toward them. It looked like it had originally been a Pomeranian before something awful had happened to its face.

Its right eye hung lower than the left, and the poor thing appeared to be missing its bottom jaw. Its pink tongue hung out of its face. Seeing her, it stopped and made a low gurgling growl and then said, “Lark! Lark!”

“He’s getting better with his barking,” Devon said. “At least now it sounds like he’s trying to bark.” He squatted and rubbed the dog’s shaggy white head. “You’re getting better, aren’t you, pal?”

In response, Killer raised his nose, tongue lolling down the front of his throat, obviously in doggie-hero worship.

“What happened to his jaw?” she asked Devon-not-Killer.

“He got in a fight. He’s lucky all he lost was part of his lower jaw.” He grinned and patted the dog’s back before straightening. “Also lucky for him, I happened to be passing by the pound the day before they were going to destroy him.”

She looked from dog to master. “And you just happened to be strolling past the pound and wondered if they had any dogs they were about to execute?”

He looked sheepish. “Not quite. I’m the one who found him and took him there after the other dog left him for dead. When I found out they were going to put him down, fate intervened and…” He shrugged. “Well, I decided I must need a dog.” His vivid green gaze met hers. “Do you believe in fate, Jamie?” His voice was low, intimate, sending shivers to her extremities.

She blinked, breaking the spell, and looked around his apartment. “Ah, no, not really.”

“Neither did I, but Francyne—that’s my neighbor—swears by it. She’s made a believer out of me. Well, at least where Killer is concerned, anyway.” He shuffled through a pile of papers on an old desk and then waved a fistful of blue ones. “Here’s the lease, if you want to read it over.”

“Is that necessary?” Being in the same room with Killer was beginning to affect her allergies. A sinus headache wove its fingers across her forehead and around her eyes. Eyes that were definitely beginning to itch.

“No, it’s pretty much standard. First and last month. No real lease time. It’s month to month.” He gave a bark of laughter. “Francyne suspects it’s because the owners plan to sell it to developers and don’t want anything standing in their way in case they get an offer.”

“Is that what you think, too?” She stepped closer.

He shrugged, trying to ignore her warm, powdery scent. “I dunno. She’s lived here for a couple of decades. I’ve worked here for three years, and it hasn’t happened yet.”

Jamie took the pen he offered, sneezed and bent over the table to begin filling out and signing the lease.

“Bless you,” he muttered, then added a prayer of thanks while he eyed the cleavage revealed when she bent over the table. The firm globes pushing the neckline of her pink sweater to the edge of decency were roughly the size of small cantaloupes and defied gravity. He salivated and resisted the urge to rearrange his enlarging package.

Jamie sensed the manager eyeing her cleavage and resisted the urge to cover up.

Jamie paused and looked up.

A huge black dog galloped into the apartment, knocking over a small wooden chair and an end table in its wake.

Hot on the dog’s heels was a deeply tanned, small woman with snowy white hair. Dressed in a brightly colored muumuu that fluttered around her slight frame, her small feet shod in white socks and sturdy walking shoes, she was a hair’s breadth from catching the animal.

The dog faked a left and then darted around the woman.

Before Jamie could form her next coherent thought, the warm feel of fur against her skin registered, followed immediately by a jarring thump as her rear end met the tiled floor beside the dining table.

“Petunia!” Devon grabbed for the dog’s collar, missed and ended up tackling and wrestling her to the ground. Panting, he looked over his shoulder at Jamie.

Sitting with her hands braced behind her back, her legs slightly apart, she belatedly realized he could see clear up to her crotch.

Numb, she shook her head and tugged on her denim miniskirt then slowly got to her feet.

“Petunia,” the older woman said, grasping the big dog’s collar and hauling her to her feet. “What am I going to do with you? Give me that! Release!”

“Bless your heart,” she said to no one in particular as far as Jamie could tell. “I bet you’re here for the job.”

“Job?” Devon and Jamie said as one.

“Sexual-aids product tester.” With scarcely a breath in between sentences, she continued. “How do you do? I’m Francyne Anderson. I’m the one who put the ad in the paper, but Devon is the one you’ll be working with.”