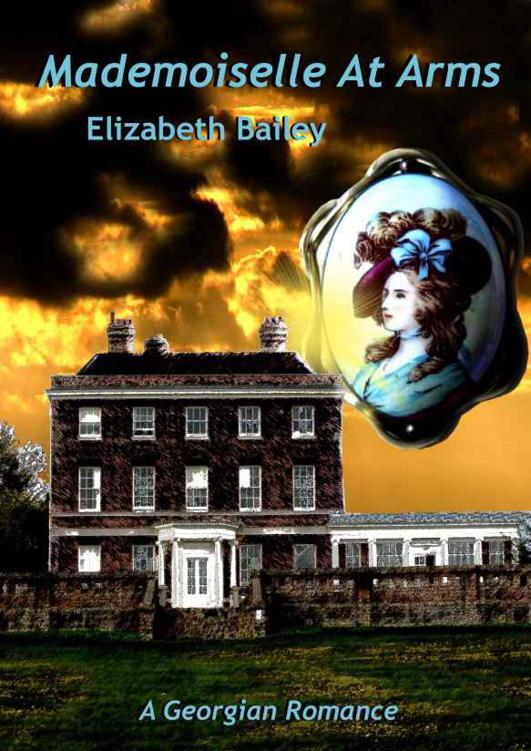 The
moral right of the author has been asserted.

No
part of this publication may be reproduced, stored in a retrieval system, or
transmitted in any form or by any means without the prior permission in writing
of the author. Nor be otherwise circulated in any form of binding or cover
other than that in which it is published and without a similar condition
including this condition being imposed on the subsequent purchaser.

All
characters and events in this publication, other than those clearly in the
public domain, are fictitious and any resemblance to real persons, living or
dead, is purely coincidental.

Threatened with a pistol by the young lady he finds in a
deserted mansion, Major Gerald Alderley is intrigued. Who is the beautiful
intruder? And why does she disguise herself as a nun? Why is she involved in an
enterprise both foolhardy and dangerous? The girl’s accent suggests an émigré but
Mademoiselle insists she is English.

Set on unravelling her secrets, Gerald pursues every possible
clue—much to the indignation of Mademoiselle. Even with her life in danger from
the villainous Valade, Mademoiselle Melusine, engaged in a desperate battle to
prove her true identity, believes she is well able to take care of herself and
is determined not to be rescued.

In the quiet of an autumn afternoon, the deserted mansion
slept. Or appeared to do so. Concealed among the trees that edged the estate
grounds, the watchers paused.

There were two of them. Men of action by the scarlet coats
with their grey facings—insignia of the county militia. Cocked hats and buckled
swords spoke of rank. Officers were these. Too skilled to advertise their
presence by a show of arms and men. The spy—if there was one hiding out in the
late Jarvis Remenham’s empty house—would be taken unawares.

Wary they might be. Sanguine they were not. In fact, one of
them was downright sceptical.

‘Don’t be too sure,’ responded Major Gerald Alderley on a dry
note. ‘I am expecting a huge rat to emerge any second. Waving a white flag,
naturally.’

Captain Roding grinned. ‘Why not a French flag?’

‘Because I don’t believe that fool Pottiswick could tell
French from Arabic, even if he heard it as he says he did—which I take leave to
doubt.’

The lodgekeeper had been in fine fettle by the time Major
Alderley had produced his investigatory force at the gates.

‘Gabbling and muttering in a foreign tongue, that’s what I
heard, sir,’ had declared the gap-toothed ancient, when he told them of the
initial foray he had made, sneaking around the house in the dark. ‘One of they
Frenchies, that’s what I say—if it ain’t a ghost.’

‘Well, it ain’t a rat this time, Major, I can promise you
that,’ Pottiswick had rejoined, his tone affronted.

‘It had better not be, by God,’ had barked Captain Hilary
Roding.

Gerald sympathised with his friend’s irritation. The last
time Pottiswick had called out the militia on suspicion of intruders in
Remenham House, a large rodent had been all the spoil. It had certainly caused
some havoc in the uninhabited mansion, chewing through Holland covers to get at
the furniture beneath, and knocking down a fire guard and a couple of wooden
stands. Truth to tell, more damage had been done in the enthusiastic chase
carried out by the militiamen detailed to catch it.

‘I never met a rat what wandered about the place with a
lantern, I didn’t,’ grumbled the old lodgekeeper aggrievedly.

‘Did you see the man?’ Gerald asked.

‘No, but I seen the light, sir. Moving room to room it was.’ He
added pointedly, ‘Early this morning that were. I sent a message straight.’

‘We had other matters on hand this morning,’ Roding told him
sharply.

Fiercely defensive, as usual. It both pleased and amused
Gerald that Hilary adhered rigidly to protocol before the men, no matter what
he might say to his major on other occasions. Besides, it was not the
lodgekeeper’s business to know that “other matters” included a reluctance on Gerald’s
part to allow his little company to conduct the search without him, and he’d
had an engagement this morning.

‘I suppose you think I can’t manage it myself,’ had
complained Captain Roding sarcastically.

‘Nothing of the sort,’ argued Gerald. ‘But on the off chance—slim,
I grant you—that there is a spy down there, I don’t want to miss the fun.’

The possibility was indeed remote, for there had been no
trouble with France since the Peace of Versailles had been signed six years ago.
But the current rumblings of internal discontent across the Channel were
productive of unease in certain quarters. Even an unlikely episode such as this
could not be ignored. Besides, Gerald would not for the world have passed up
the chance of a little excitement.

It seemed at this moment, however, that there was not going
to be any “fun”, and Captain Roding said so.

‘How disappointing,’ mourned Gerald. ‘Ah, well, we’ll check
the back and then go home.’

‘Don’t tell me,’ exploded his second-in-command. ‘I know you,
Gerald. We won’t drag you away until you’ve been through the place from top to
bottom.’

Alderley laughed. ‘Just around it, Hilary, that’s all.’ He
added on a teasing note, ‘Though if there’s anything suspicious we can always
get the key from Pottiswick.’

Hilary Roding groaned, but obediently followed Gerald as he
began to make his way through the trees towards the back to a vantage point
from where they might examine the rear of Remenham House. One glance swept
across the place and it was immediately apparent that Pottiswick had not, this
time, been mistaken.

‘Aha,’ grunted Gerald with satisfaction, squinting up at the
two open shutters on the second floor. ‘A French rat with exceedingly long
arms, I see.’

‘Gad, there is someone there,’ exclaimed Hilary beside him,
shading his eyes with one hand. The warm September sun fell strongly on this
part of the grounds, uninterrupted by trees, its light bouncing off the glass
in the mansion’s walls. He added succinctly, ‘Windows are open.’

Even as they watched, a shadow passed across one of the
apertures.

Gerald stayed him. ‘Wait! No time for that. We’re going in.’

Hilary eyed him. ‘And how do you propose to get in?’

‘You’re going to break into the house? You’re mad.’

‘Nonsense, it’ll give Pottiswick something genuine to
complain about,’ said Gerald cheerfully, moving to the edge of the trees. ‘Besides,
I don’t want the men blundering in here and frightening off our spy. Come on.’

‘You’re incorrigible,’ scolded Hilary, beginning to follow. ‘No
one would credit that you are three years older than I.’

‘You always were an old sobersides, even as a boy,’ retorted
the major, who was close on thirty now, yet as ripe for excitement as he had
been on receiving his first commission at sixteen. Ten years of military life
had taught him caution, but only strengthened a fearless zest for diving into
any promising adventure with unalloyed enjoyment.

Out of sight of that tell-tale window, the two officers
darted across the grounds, speedily gaining the lee of the mansion walls. Hugging
them, they crept stealthily around the house, Major Alderley leading, and
wasting—so his captain acidly commented—a deal of time checking the windows and
doors. When he tried the scullery door, and would have moved on, Hilary
intervened.

‘Thought you were going to break in here,’ he said, in an
impatient whisper.

‘We may have to,’ Gerald answered thoughtfully, staring at
the window to one side.

Gerald tutted. ‘Housebreaking, Hilary? I take the matter of
housebreaking very seriously, I’ll have you know.’ He quirked an eyebrow. ‘I
thought, you see, that we might as well enter by the same way our intruder had
done.’

Roding looked struck. ‘You mean there isn’t any evidence of a
break-in.’

‘Precisely,’ Gerald repeated. He glanced up. The open windows
were above them now and, unless the intruder were to lean out, they could not
possibly be seen. ‘Let’s check the rest of it and then I suppose we will have
to break in.’

‘For God’s sake,’ protested his junior. ‘I thought you said
you take housebreaking very seriously.’

‘I do. I intend to remain very serious indeed while I’m doing
it.’

‘Dunderhead. Why don’t I just go and get the key from
Pottiswick?’

Alderley flicked a glance back at him over his shoulder. ‘You
can if you like.’

Hilary Roding, despite the fact that he was both a younger
and slighter man than his friend—although wiry and tough with an attractive
countenance that had won him the heart of an extremely eligible young lady—had
a rooted conviction, as Gerald well knew, that it was not safe to leave Alderley
to his own reckless devices. It occasionally troubled the major that Hilary’s staunch
loyalty had led him into hair-raising exploits at Gerald’s side, for he was
perfectly aware that Hilary would not have dreamed of deserting him.

They had completed a circuit of the mansion before Roding’s
frustration burst out. ‘How in God’s name did the wretched fellow get in then?’

‘Dug a tunnel?’ suggested Gerald, halting next to a pair of
French windows at the front. ‘Or flew in by balloon, perhaps.’

‘Oh yes, or walked through the walls, I dare say. And if you
mean to use that dagger to slip the lock, you’ll make enough noise to bring ten
spies down on us.’

But Major Alderley might have been an expert for all the
sound he made as he forced the lock with the heavy blade.

Darkness closed in on them as the officers stepped inside the
musty interior. Gerald stood quite still for a moment or two, listening
intently. Utter silence answered him. Then he could hear Hilary breathing
beside him, and from outside the muted twittering of birds.

As his eyes adjusted, he was able to make out the great
shrouded shapes of the furniture. A brief feeling of empathy with Pottiswick passed
through him. There was an eerie sense of brooding menace about an uninhabited
establishment. No one had lived here since old man Remenham had died some
eighteen months ago, for the heir, so it was rumoured, was a relative with
property of his own.

The Star Diaries by Stanislaw Lem
Queen (Regency Refuge 3) by Heather Gray
Aphrodite by Kaitlin Bevis
Sister of Silence by Daleen Berry
Raised from the Ground by Jose Saramago
Charm City (The Demon Whisperer Book 1) by Ash Krafton
The Fledge Effect by R.J. Henry
Break You by Snyder, Jennifer
The Trophy Exchange by Diane Fanning
THE DEEP END by Mulhern, Julie