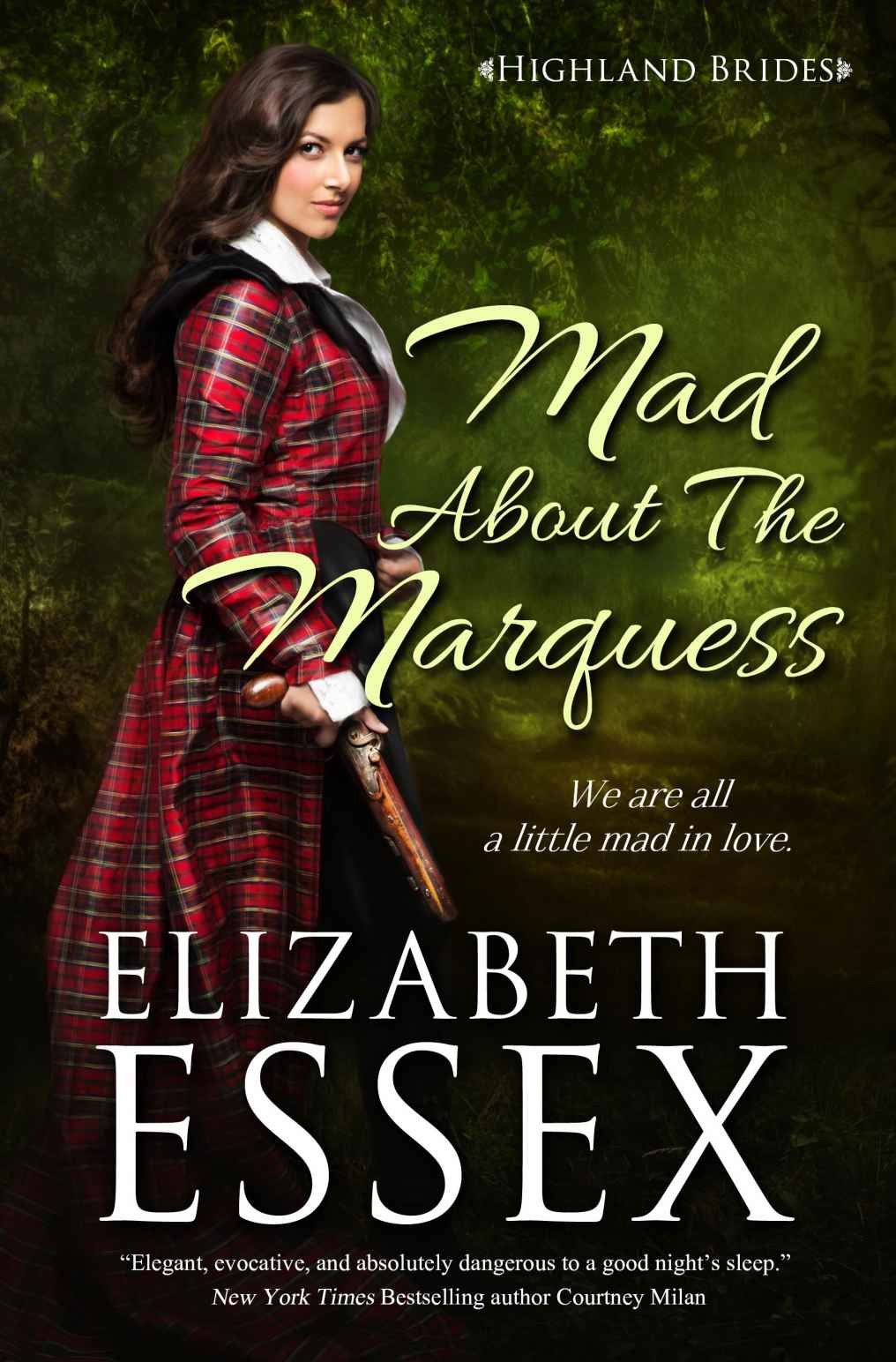 From acclaimed author Elizabeth Essex comes the adventurous first book in the Highland Brides, a quartet of bold, brilliant lasses determined to make their own happily ever afters.

Love is even harder to resist than temptation.

When a lady takes to the road to play Robin Hood

Lady Quince Winthrop has been robbing from society’s rich and giving to Edinburgh’s poor for years. But everything changes the day she can’t resist the temptation to steal from the Marquess of Cairn.

She must be on her guard against her Sheriff of Nottingham

Alasdair, Marquess of Cairn, has come back to Scotland to stop a thief, never thinking that the lass he’s trying to woo is about to give a lesson in larceny he won’t be able to forget. From the twisted streets of Auld Reeky, to the hills of the highlands, Quince leads Alasdair on a merry chase, and finds the one man she shouldn’t fall for, is the one man she can’t resist.

This is a work of fiction. All of the characters, organizations, and events portrayed in this novel are either products of the author’s imagination or used fictitiously.

MAD ABOUT THE MARQUESS

Excerpt from
Mad for Love
by Elizabeth Essex, 2015

Excerpt from
Mad, Bad, and Dangerous to Marry
by Elizabeth Essex, 2015

All rights reserved. The author has provided this book for personal use only. This book or any portion thereof may not be reproduced or used in any manner whatsoever without the express written permission of the publisher except for the use of brief quotations in a book review.

To Lori Freeland, writer, critiquer, advice-giver par excellence, and friend, who wanted to call this book “The Earl and His Girl,” and in so doing, helped me find the characters.

The race is to the strong, not just the quick, my friend.

Lady Quince Winthrop had always known she was the unfortunate sort of lass who could resist everything but temptation. And the man across the ballroom was temptation in a red velvet coat. There was something about him—some aura of English arrogance, some presumption of privilege—that tempted her beyond reason, beyond caution, and beyond sense. Something that tempted her
to steal from him. Right there in the Countess of Inverness’s ballroom. In the middle of the ball.

Which was entirely out of character. Not the stealing—she stole as naturally as she breathed. But because the other thing that Lady Quince Winthrop had always known, was that the most important thing about stealing was not
where
one relieved a person of his valuable chattels. Nor
when.
Nor
how.
Nor even
what
particular wee trinket one slipped into one’s hidden pockets. Nay.

The tricky bit was always
from whom
one stole.

When one robbed from the rich, one had to be careful. Pick the wrong man, or woman for that matter—too canny, too important, too powerful—and even the perfect plan could collapse as completely as a plum custard in a cupboard. Which made it all the more curious when she ignored her own advice, and picked the wrong man anyway.Whoever he was, he stood with his back to her, his white-powdered hair in perfect contrast to that red velvet coat so vivid and plush and enticing that Quince was drawn to it like a Spanish bull to a bright swirling cape. Unlike the gaudily embroidered suits worn by the other men, the crimson coat was entirely unadorned but for two gleaming silver buttons that winked at her in the candlelight, practically begging her to nip one of the expensive little embellishments right off his back.

A button like that could feed a family of six for a fortnight.

And while her itchy-fingered tendency toward theft was perhaps not the most sterling of characteristics in an otherwise well brought up young Scotswoman, no one was perfect. And it was so very hard to be
good
all the time.

She had much rather be bad, and be
right
.

So Quince took advantage of the terrific crush in Lady Inverness’s ballroom, slipped her finger into the tiny ring knife she kept secreted in the muslin folds of her bodice for just such an occasion, and sidled up behind Crimson Velvet.

She did not pause, nor give herself a moment to think on what she was about to do. She ignored the chitter of warning racing across her skin, and set straight to it, diverting his attention by brushing her bodice quite purposefully against his back, while she nipped the button off as easily as if it were a snap pea in a garden.

The elation was like a rush of blood to the head—intoxicating and addictive.

And because that was what she did—regularly stole fine things from finer people in the finest of ballrooms—she wasn’t satisfied with only the one button. Nay. Another six mouths could be fed, and Quince could live all week on the illicit thrill of having taken the second button as well, and gotten away clean.

Except that she didn’t get away clean.

She didn’t get away at all.

A very large hand clamped onto Quince’s wrist like a shackle. A red velvet-clad hand.

Alarm jumped onto her chest like a sharp-clawed cat, but Quince kept her head, automatically tucking the buttons and knife down the front of her bodice, and winding her now-empty free hand around that crimson velvet waist. She pressed herself to his backside more firmly, and familiarly, and said the first unexpected thing that came to her mind. “Darling!”

Crimson Velvet went as stiff as a bottle of Scotch whisky. “Good Lord. What’s this?”

Alarm faded as recognition, and something that really oughtn’t be delight curled into her veins. She knew that deceptively easy tone. Strathcairn. Earl thereof.

The Laughing Highlander, she had once called him. But the Highlander was not laughing now. He was looking down at her with a sort of astonished wonder. “Wee Quince Winthrop, is that you? Good Lord.” He stepped away—though he did not let go of her wrist—to case her as thoroughly as she ought to have done him. “I would not have recognized you.”

She had clearly not recognized him. But the man gripping her wrist was neither the powdered dandy she had imagined from across the ballroom, nor the amusing, carefree Earl of Strathcairn she remembered. This man was different, and as dazzling in his own way as the shining silver buttons she had secreted down her soft-pleated bodice.

Firstly, he was as irresistibly attractive as that red velvet suit—all precise, well-cut

shoulders, and long lean torso that seemed a far cry from the rangy, not-yet-fully-formed man in his youth. But secondly—and more importantly—he was much more controlled, more…curated, as if he had carefully chosen this particularly splendid view of himself to show the world. As if he not only wanted, but demanded to be
seen
.

Quite the opposite of Quince, who minded her appearance only to make sure she blended into the crowd—if her sister told her this season everyone was wearing white chemise dresses, then a white chemise dress she wore, disappearing into a sea of similarly dressed swans.

By contrast, Strathcairn looked every bit an individual, and quite, quite splendid. His waistcoat was of the same saturated color as his coat, and his snow-bright linen with only the barest hint of lace was the perfect foil for his immaculately powdered hair.

On any other man such a look might have appeared plain and underdone, but on Strathcairn the blaze of unadorned velvet served to highlight the force of his personality.

And there was nothing she liked as much as personality, unless it was a challenge.

The earl appeared to be both.

“Why, Strathcairn.” She made her voice everything breezy and cordial. As if her heart were not beating in her ears, and dangerous delight were not dancing down her veins. “It’s been an age.”

“Too long, from the looks of it.” He stepped close—too close, not that she particularly minded—and looked down at her in a perilously attentive way, like a great, green-eyed tomcat eyeing up a wee mouse. The effect was most unsettling. It put her right off her stride. “Do you often embrace men you haven’t seen in years?”

It had been exactly five years. He had briefly been one of her eldest sister Linnea’s suitors then—newly elected a Member of Parliament, and headed to London, brilliant and ambitious. Quince remembered thinking the lanky Highlander was too tall, too clever, too canny, and far too insightful for tiny, fluttery Linnea, who adored nothing more than to be made a pet of.

Quince had been little more than a fourteen-year-old lass, but she had quite liked the young man’s intelligence, nearly as much as his vibrant charm. Though what she liked best of all was his lovely, buttery smile that had made her feel like she was melting in the sun.