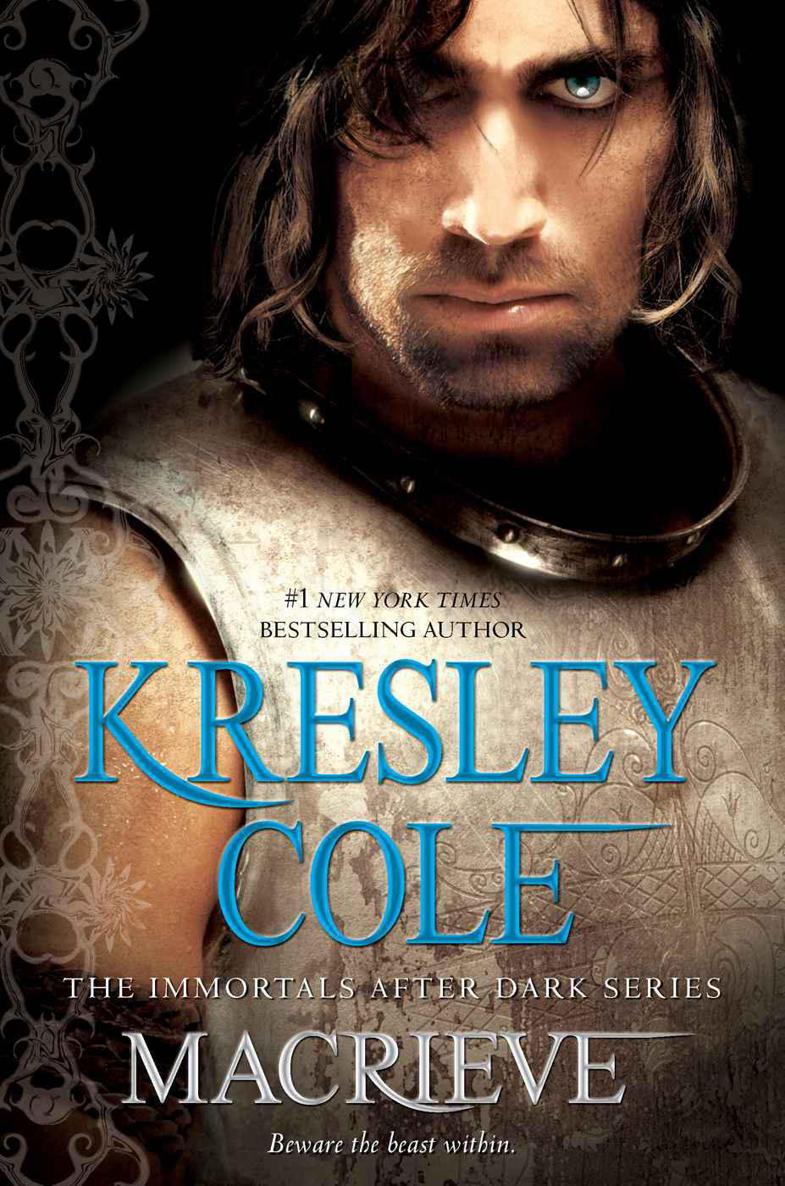 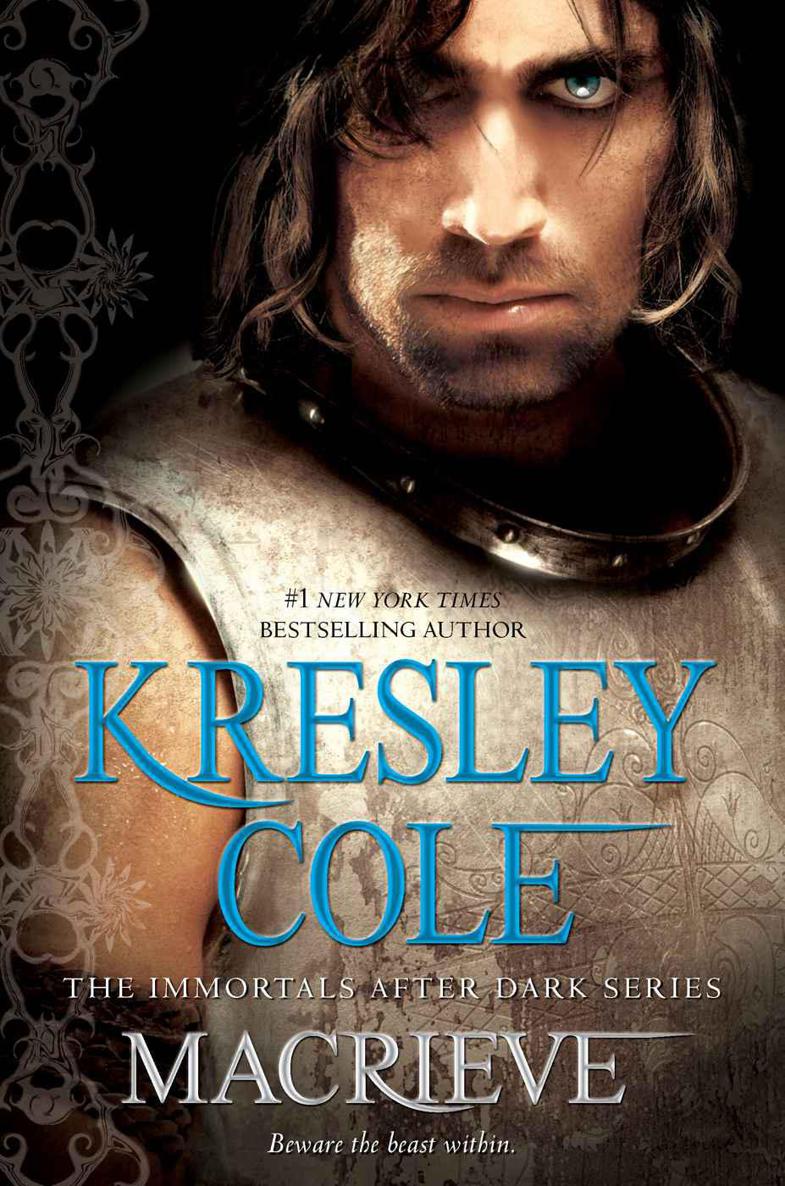 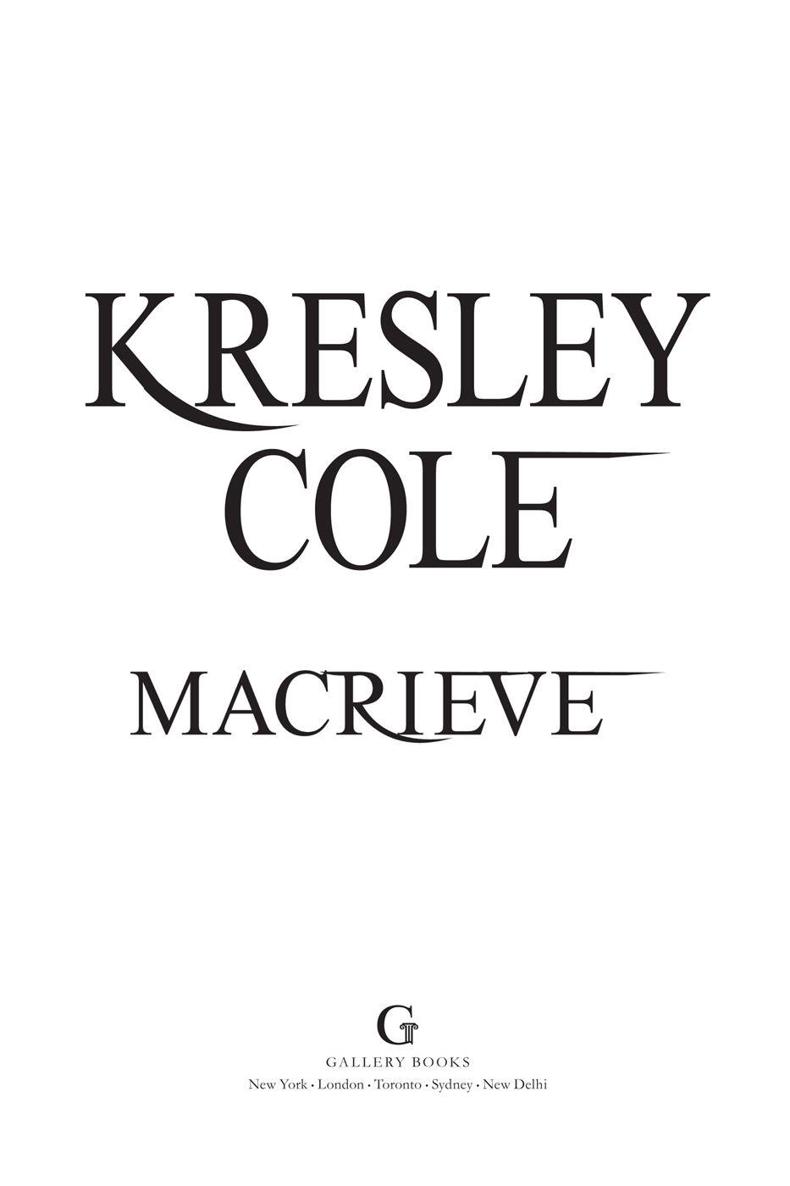 Warmly dedicated to the Lykae lovers of the Immortals After Dark community. This one’s for you. . . .

Many thanks to Belinda and Karen, soccer goddesses, for all your sporty wisdom. You answered many a late-night query, even though you had to be on the pitch in the a.m.

Much appreciation to Dr. Beth, for all her insights into child psychology.

And lastly, thank you to the production team at Simon & Schuster. Chocolate TK.

“ . . . and those sentient creatures that are not human shall be united in one stratum, coexisting with, yet secret from, man’s.”

• Most are immortal and can regenerate from injuries, killed only by mystical fire or beheading.

• Their eyes change with intense emotion, often to a breed-specific color.

“A proud, strapping warrior of the Keltoi People (or Hidden People, later known as Celts) was taken in his prime by a maddened wolf. The warrior rose from the dead, now an immortal, with the spirit of the beast latent within him. He displayed the wolf’s traits: the need for touch, an intense loyalty to its kind, an animal craving for the delights of the flesh. Sometimes the beast rises. . . .”

• Each Lykae possesses the Instinct, an inner guiding force, like a voice whispering in one’s mind.

• Mate for life. Over eternity, they seek their fated one above all things, revering matehood as other species do gods.

• Royal seat is Kinevane in the Scottish Highlands.

“Descendants of demons, reapers of pleasure. Thrice in one’s arms, forever enslaved. Separation begets grave sickness, yet only through death can the envenomed be freed.”

• Derive nourishment from the sexual enjoyment of others.

• Possess the ability to sexually madden their victims. A succubus uses
strew;
an incubus
stav.

• After a third mating, they form a bond with their conquests, a mystical tie called
venom.

“And a time shall come to pass when all immortal beings in the Lore, from the Valkyrie, vampire, Lykae, and demon factions to the witches, shifters, fey, and sirens . . . must fight and destroy each other.”

• A kind of mystical checks-and-balances system for an ever-growing population of immortals.

• Two major alliances: the Pravus Rule and the Vertas League.

In a dark forest, in a dour land, stood an enchanted cottage. Within it, Uilleam MacRieve was about to bicker with his mate, Lady Ruelle.

As the blizzard outside gathered its strength, Will sat on the edge of her bed, wearily preparing for battle.

In the past he’d have stared agog at that generous flesh; now he scowled at her antics. “You know I canna stay.” Always with these antics. Could she not tell how deep she’d already drawn from him this eve?

“ ’Tis hours till dawn.” She rose up on her knees to purr at his ear, “I needn’t keep you long.” Her words were accented with the flavor of distant realms.

In these northern lands of the Lykae, Ruelle was a rarity, a foreign female who dressed in lace and silks and had no skill with a sword. She lived alone here in the Woods of Murk—a place of fairy rings and curses, of portals to different planes and creatures of old that even Lykae feared.

Only a dare from other boys had coaxed Will’s feet into that eerie forest the first time.

“Once more?” He rose to wash, doubting that he had another bout in him. Nay, not a bout—that would imply two contenders. “And after that, you’ll demand yet another.” Even if he was physically capable, he needed to get back to Conall Keep before his family realized he was gone. “Already I’ve yielded to your wishes.”

At her basin, he gazed into her oversize mirror—his Ruelle could be a
tad
bit vain—and spied her behind him. In the firelight, her hair appeared burnished, her cheeks and lips rouged to match, the colors stark against her milk-white skin and gray eyes.

She pouted prettily. Everything she did was pretty, even lovemaking—unlike the trollops his older cousins routinely tupped in the hayloft.

Afterward, those wenches would be heavy-lidded with satisfaction, even as they looked like they’d just gone to war in the hay: faces and chests flushed from exertion, hair and clothing disheveled.

Ruelle never looked like that. With a pang, he admitted to himself that she had never been completely . . . fulfilled when he’d left her.

She often cajoled him to mate her again and again until he was exhausted. “Look at you—who can blame me?” she’d ask, explaining that his kind was like catnip to her, that his face alone made her sigh. One time he’d jested that she was trying to kill him, and she’d grown cross.

Sometimes being with her was like a swim in chill water—enlivening, until the deep threatened to pull you under. On occasion, he struggled to breathe when she had him beneath her, his lungs seeming to shrivel up.

Which was a shameful weakness. Ruelle was beautiful and sensual—any lad would count his blessings to be in her bed. And she was
his
mate. They were both sure of it.

“You could eat again.” She waved to indicate the banquet she’d prepared for him, sweets and delicacies that were rarely allowed at his home. He shook his head, had already eaten his fill.

In the beginning, she’d gotten him to glut himself. With a laugh, she’d pinched his slim fingers and declared him underweight.

“ ’Tis your own fault for being so tantalizing.” She ogled him as he washed thoroughly. Early on, she’d warned him that his family could smell her on him.

“You’re the one insisting that we keep this secret. If I could tell my da—”

“No! That’s not possible.” She paled beneath those tinted cheeks. “They will never accept what’s between us.”

“Then I must be there for chores.” He had work to do at sunrise, and his twin brother, Munro, was already suspicious of Will’s sneaking away late every other night.

“You come from one of the richest families in the land—the Sentinels, for gods’ sakes—and still your father makes you work like a serf?”

“Da believes it builds character,” Will said, pulling his tunic over his head. The garment was tight, hugging his chest and arms. He and his twin were both growing like weeds, too fast for the harried seamstress at Conall.

He gazed at his own reflection and ran a hand over his lean face.
Still no whiskers though?

“Ah, Dùghlas MacRieve, the great Lord of Conall, says it builds character? Your father is mistaken—your character is already built! And finely too. You are a man in your own right.”

Nay, of course he was. Whenever Will and Ruelle quarreled, he comprehended that he was truly maturing—a grown Lykae. Adults bickered; they had concerns and cares that the young did not.

Yet if he was grown, why couldn’t he satisfy her? A flare of anger took him by surprise. “If you have call to criticize my da, you should do it the Lykae way: to his face.” As soon as the words left his mouth, he regretted them. Her species was made to love, never to fight.