Love of a Marine (The Wounded Warriors Series Book 2) 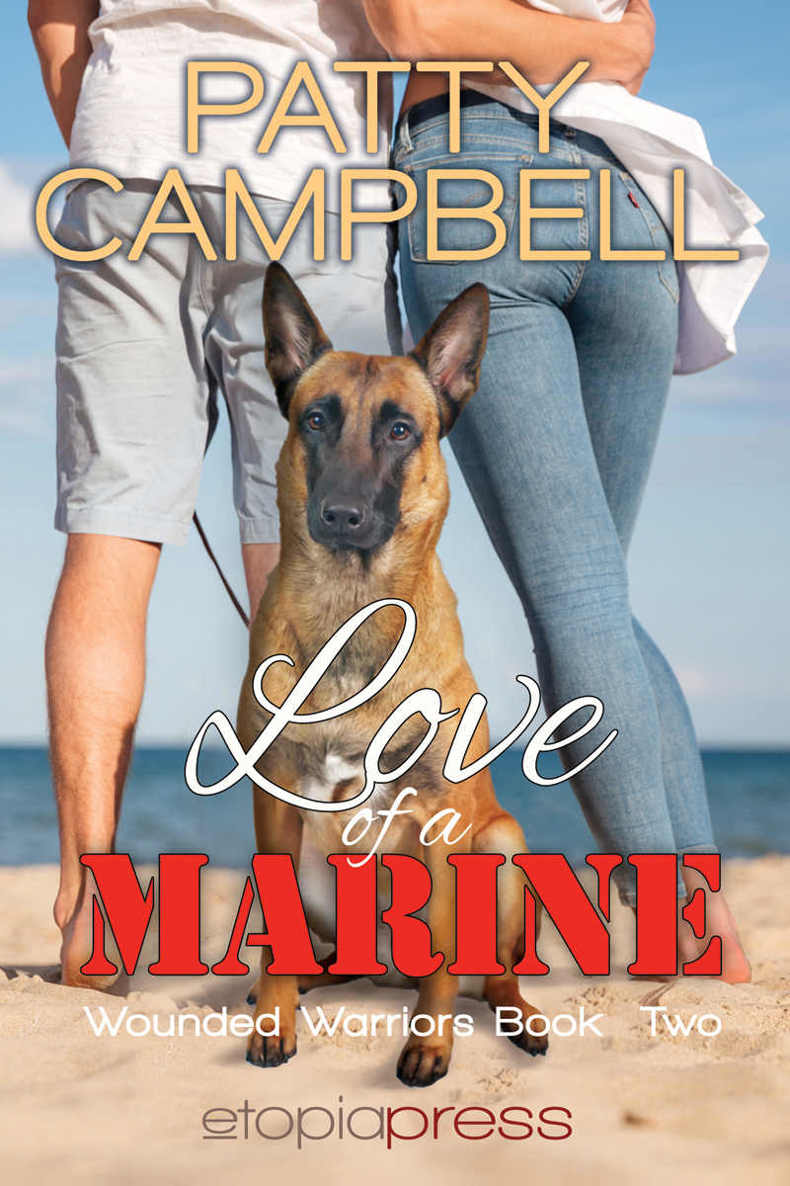 Look for these titles from Patty Campbell

For
Jelly’s Big Night Out

“This is a wonderful real-life down-to-earth story of an outstanding sister who gives up her freedom to raise her sister. Yes, there are tears. And yes, there is a happy-ever-after!”

“A great read with characters you will really enjoy.”

For
Once a Marine

“The storyline was entertaining with high drama near the end.”

“I loved this story by Patty Campbell. The story was rivteting, and I didn't want to put this book down.”

Look for these titles from Patty Campbell

Heart of a Marine (Book One)

Love of a Marine (Book Two)

Love of a Marine

EBooks are not transferable. They cannot be sold, shared, or given away. The unauthorized reproduction or distribution of this copyrighted work is a crime punishable by law. No part of this book may be scanned, uploaded to or downloaded from file sharing sites, or distributed in any other way via the Internet or any other means, electronic or print, without the publisher’s permission. Criminal copyright infringement, including infringement without monetary gain, is investigated by the FBI and is punishable by up to 5 years in federal prison and a fine of $250,000 (
http://www.fbi.gov/ipr/
).

This book is a work of fiction. The names, characters, places, and incidents are fictitious or have been used fictitiously, and are not to be construed as real in any way. Any resemblance to persons, living or dead, actual events, locales, or organizations is entirely coincidental.

Love of a Marine

To Joseph Cameron, a wounded warrior who shared his PTS nightmares with me, and graciously consented to me using them in the book.

All author’s proceeds from the sale of this book will go to Wounded Warriors of South Florida, so that they can continue their good work on behalf of our greatest national treasure—our Veterans.

Who is that man? Why is he here every day?
He rarely looked around, just stared out to sea for hours on end. Something must have happened to him. He seemed isolated from his surroundings on this beautiful stretch of southern California beach. She shook her head and sighed.

Graciella Jefferson turned her attention to her nine-year-old son, Santos, chasing wavelets at the edge of the surf on Zuma Beach. They’d been here every morning since school let out two weeks ago. He loved the ocean, but hadn’t worked up the nerve to go in above his knees. She smiled, knowing he’d get there in his own good time. His father had been a genuine frogman.

He smiled and waved, took a last flat-footed jump in the shallow water then ran to join her on the blanket under the big carnival striped umbrella. “Mom?”

“See that man and his dog over there?” He tilted his head in the direction of the rocks near Point Dume.

“They’ve been here every morning this week, and they’re still there when we leave. They must love the beach as much as I do.”

Graciella pushed up the brim of her wide hat to get a better look. Santos was right, the man was always there. He and the dog stared out to sea. Every now and then the man would reach down and rub the dog’s head.

“I can’t be sure, but it looks like a vest, the kind service dogs wear.” She squinted to get a better look.

He took a big swallow of lemonade and wiped his mouth on his forearm. “What’s a service dog?”

“Use this.” She handed him a faded, old cloth napkin. “A service dog is a companion that is specially trained for certain tasks.”

“But that man can see. He watches the ocean a lot. His dog just sits there next to him, not doing anything.” He pointed his skinny arm toward the rocks where the man sat on the sand with his hands dangling between his knees.

“It’s not polite to point, Santos.”

She tousled his curly black hair. He looked so much like his late father it nearly broke her heart. “Enough questions. Eat. We have to head back in about an hour. I have a class to teach this afternoon.”

Graciella watched him for a bit, then picked up her book and got comfortable in the sand chair to read. After several minutes she looked up and her heart skipped a beat when she didn’t see him. She dropped her book and scanned the beach. He was walking toward the man and his dog, kicking his toes in the wet sand. He glanced back at her, a broad grin on his face, and waved.

Cluny and Queen had had another bad night. There had been a lot of them this past six months. He didn’t understand why he could go months, even years, without the nightmares and the shaking, then they’d return. A year ago he’d gotten Queen, on the advice of his buddy, Dwayne Dempsey, and a therapist at the VA.

A skinny, dark-skinned kid about nine or ten walked in their direction. The boy and the woman had been about a quarter klick down the beach every morning. He figured it was only a matter of time before the kid got curious.

“Hi, mister.” The boy slowed to a stop about three yards away from him. He stood quietly, expression tentative.

“Hi.” Cluny smiled. He glanced down the beach and saw the woman stand. He waved at her.

“Why is your dog wearing a vest?” He shaded his eyes from the glare of the sun.

“She’s working this morning.” Cluny laid his hand on Queen’s back.

“I didn’t see her do anything.” He took a few steps closer. “What does she do?”

“I’ll ask her.” He unbuckled Queen’s vest, and she stood, shook, and stretched. “Want this good-lookin’ boy to pet you, Queen?” She wagged her tail and took a step in the boy’s direction.

Cluny smiled at the woman strolling toward them. “What’s your name, son?”

The boy knelt in front of Queen. She sat on her haunches and lifted a paw. The kid giggled and grasped her foot. “Santos Jefferson, what’s your name, mister?”

Cluny stood and brushed sand from the seat of his shorts. “I’m Cluny McPherson.” He tilted his head toward the tall, willowy woman approaching them. “Is that your mother?”

“Yes.” The boy buried both his hands in the dog’s ruff and scratched vigorously. He laughed when Queen groaned with pleasure. “She likes it.”

“I think we should go meet your mother. She looks concerned. Come, Queen.” He stooped to pick up the dog’s vest and stuffed it in his cargo pocket. The boy joined him, and they walked toward the woman.

“Mom! Isn’t she beautiful? Her name is Queen. She keeps him company.”

Cluny extended his hand. “Ma’am.” She was almost as tall as his six-one in bare feet, her skin a luscious golden honey-brown, with eyes to match. “Cluny McPherson.”

She hesitated and then took it. “Hello. Graciella Jefferson. My son was curious about your dog.”

Her deep voice had a slight, intriguing accent, her handshake as firm and strong as she appeared to be. Cluny was stunned by her beauty.

He cleared his throat. “Yes, Santos asked me what she did other than stare at the water.” He grinned and a thrill jolted through him when she returned his smile.

She appeared to size him up quickly and then asked, “Would you like some lemonade? We’ll be leaving soon and it’ll be one less thing for me to carry back to the car.”