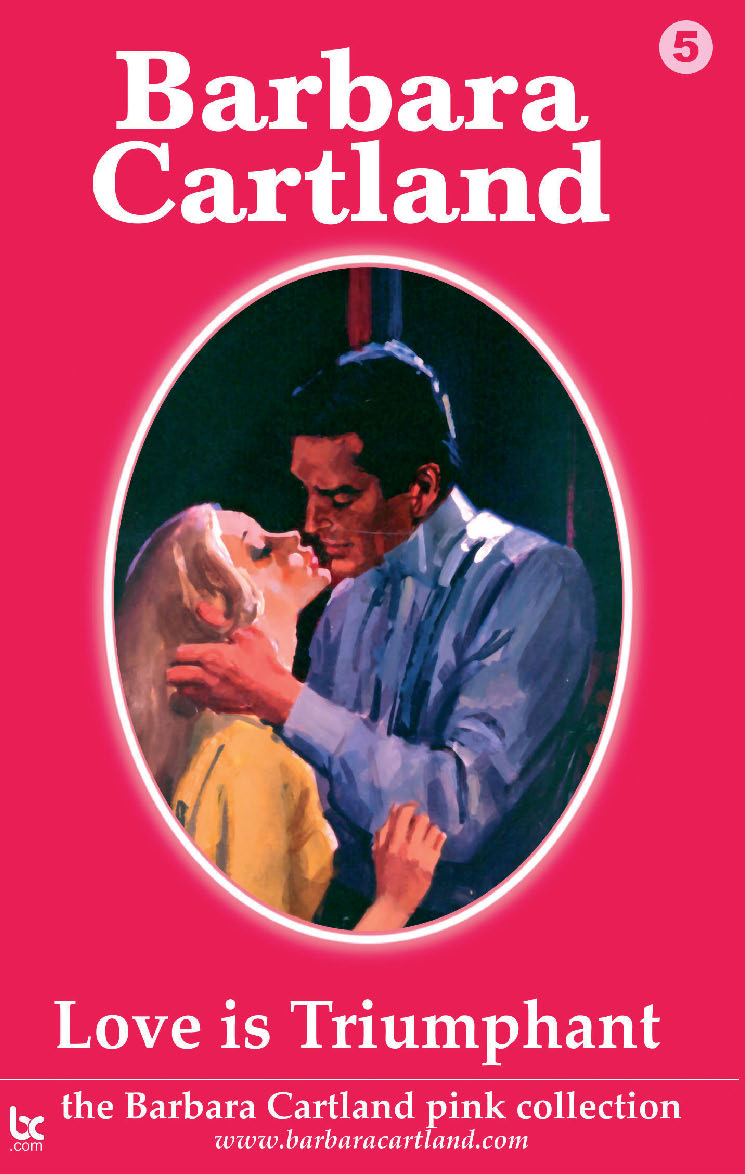 Copyright © 2005 by Cartland Promotions
First published on the internet in 2005 by
Barbaracartland.com

The characters and situations in this book are entirely
imaginary and bear no relation to any real person or actual happening.

This book is sold subject to the condition that it shall not,
by way of trade or otherwise, be lent, resold, hired out
or otherwise circulated without the publisher's prior consent.

No part of this publication may be reproduced or transmitted
in any form or by any means,
electronically or mechanically, including
photocopying, recording or any information storage or retrieval,
without the prior permission in writing from the publisher.

In his eagerness he had seized her hands and was holding them tightly. There was a burning light in his eyes as he looked at her, and she could feel his warm breath fanning her face.

Startled, Rosina gazed back at him so that their eyes met and she seemed to be looking directly into his soul. At the same time she had a disconcerting feeling that he too was looking into her soul.

She took fright. How dare he do this, as though every thought and feeling she had was opened up to him. How dare he understand her!

She snatched her hands back, turning away from him.

"Indeed it is not," she said in a shaking voice.

"I wish you every success, Miss Clarendon. You deserve the best that the world has to offer."

Without warning she found herself on the verge of tears. She took a moment to control herself, then turned back to smile at him, wanting to be friends again.

But he had gone.

Barbara Cartland was the most prolific bestselling author in the history of the world. She was frequently in the Guinness Book of Records for writing more books in a year than any other living author. In fact her most amazing literary feat was when her publishers asked for more Barbara Cartland romances, she doubled her output from 10 books a year to over 20 books a year, when she was 77.

She went on writing continuously at this rate for 20 years and wrote her last book at the age of 97, thus completing 400 books between the ages of 77 and 97.

Her publishers finally could not keep up with this phenomenal output, so at her death she left 160 unpublished manuscripts, something again that no other author has ever achieved.

Now the exciting news is that these 160 original unpublished Barbara Cartland books are ready for publication and they will be published by Barbaracartland.com exclusively on the internet, as the web is the best possible way to reach so many Barbara Cartland readers around the world.

The 160 books will be published monthly and will be numbered in sequence.

The series is called the Pink Collection as a tribute to Barbara Cartland whose favourite colour was pink and it became very much her trademark over the years.

The Barbara Cartland Pink Collection is published only on the internet. Log on to
www.barbaracartland.com
to find out how you can purchase the books monthly as they are published, and take out a subscription that will ensure that all subsequent editions are delivered to you by mail order to your home.

If you do not have access to a computer you can write for information about the Pink Collection to the following address :

Titles in this series

1. The Cross of Love

2. Love in the Highlands

4. The Castle of Love

Barbara Cartland who sadly died in May 2000 at the age of nearly 99 was the world's most famous romantic novelist who wrote 723 books in her lifetime with worldwide sales of over 1 billion copies and her books were translated into 36 different languages.

As well as romantic novels, she wrote historical biographies, 6 autobiographies, theatrical plays, books of advice on life, love, vitamins and cookery. She also found time to be a political speaker and television and radio personality.

She wrote her first book at the age of 21 and this was called
Jigsaw
. It became an immediate bestseller and sold 100,000 copies in hardback and was translated into 6 different languages. She wrote continuously throughout her life, writing bestsellers for an astonishing 76 years. Her books have always been immensely popular in the United States, where in 1976 her current books were at numbers 1 & 2 in the B. Dalton bestsellers list, a feat never achieved before or since by any author.

Barbara Cartland became a legend in her own lifetime and will be best remembered for her wonderful romantic novels, so loved by her millions of readers throughout the world.

Her books will always be treasured for their moral message, her pure and innocent heroines, her good looking and dashing heroes and above all her belief that the power of love is more important than anything else in everyone's life.

"Everyone falls in love at least once in a lifetime, and it is always a unique, wonderful and spiritual experience."

Rosina Clarendon was lying on her bed, reading a book, when there was a knock on her door.

"The Headmistress would like to see you, miss," said the maid who carried messages throughout the school.

Rosina checked herself in the mirror to make sure she wasn't untidy, but found her appearance neat enough to please even the eagle-eyed Miss Baxter.

She could not think why the Head had sent for her, but she had no fear of being in trouble. As the daughter of Sir Elroy Clarendon, the local Member of Parliament, she was a privileged person. She was given special treatment in many ways, including a bedroom to herself, some distance away from the dormitories where the other girls slept.

She tried never to take advantage of this favouritism, but she was not surprised when she entered Miss Baxter's study and was greeted by a smile.

"There you are, Rosina. I only sent for you because you have a visitor. Sir John Crosby has come to call on you, on behalf of your distinguished father."

The name of Sir John took her by surprise, and for a

moment it was hard to control the impulse to smile with pleasure. He was a handsome young man and she had enjoyed many sweet dreams about him, dreams that he knew nothing about.

"Sir John Crosby?" she said innocently. "I wonder why he is here."

"He will tell you himself," Miss Baxter said, rising from behind her desk. "He's standing just behind you."

She had a horrid suspicion that she was blushing, as though all her thoughts about him might be written on her face. But she managed to greet him with an appearance of composure.

"Has something happened to Papa or Mama?" she asked anxiously. "Is it bad news?"

"Not at all. All is well with your family, but I happened to be passing through on my way to my constituency, and volunteered to bring you some letters from your parents."

"How kind of you," she exclaimed.

He turned to the Headmistress, giving her his most charming smile.

"Miss Baxter, I'm sure it's against the rules, but may I speak alone with Miss Clarendon?"

"Well – " Miss Baxter hesitated, conscious that Rosina was no longer a child, and would be a debutante very soon.

"Perhaps we could take a walk in the gardens," Sir John persisted. "If we promise not to move out of sight from the house."

"In that case – yes. I'm sure you understand, Sir John, that we have to be very careful with such an attractive young lady, about to emerge into society – "

"Of course I do, and you may trust me to protect her reputation."

How could any woman resist his smile, Rosina wondered, or the warmth of his demeanour, or the vibrancy in his voice, or his way of looking and sounding as though life was a fruit to be devoured, and he was going to enjoy all of it?

Apparently the Headmistress could not resist it either.

"Then you may go into the garden," she said. "But not for too long."

Demurely Rosina walked beside Sir John into the sunny garden, trying not to look too pleased at being with him.

'Don't be silly,' she admonished herself severely. 'To him you're just a schoolgirl.'

In a short time she would be eighteen, and ready for her 'Coming Out' ball. Then she would wear pink and white satin, with rosebuds in her hair and her mother's pearls about her neck.

How grown-up she would look! In her happy dream she was a glorious vision, with her fair hair and deep blue eyes, her tall, slim figure and glowing, peachy complexion. And Sir John, who would naturally be at the ball, would be struck dumb with love at the sight of her.

She pictured him gazing, enraptured, as she made her grand entrance, wondering why he had never noticed this staggering beauty before.

But that was for the future, she thought wistfully. For the moment she was trapped in a school uniform of blue serge, that reduced her figure to a flat board. Instead of being swept up in a glamorous coiffure, her hair was worn down and held back by a ribbon.

"We'll just go as far as the stream," Sir John said. "We'll still be in sight of the building."

If only he would grab her hand and run into the woods, she thought. If only he wanted to be alone with her, to steal a kiss.

But evidently he wanted no such thing, so she merely nodded and said,

There was a fallen log by the stream, and since the weather was fine and dry they were able to sit on it.

"Things are humming in London, as you can imagine," Sir John said.

"Well, I know that the Prime Minister, Mr. Disraeli, was defeated over some bill," Rosina said. "So there's going to have to be a general election, and Papa is very excited about it, because he thinks he may actually be a Minister in the next Government. But I only know that because he wrote and told me so himself. We aren't expected to read newspapers here."

"I'm very sure you don't obey that prohibition," Sir John said with a twinkle.

"Certainly not. I buy some in the village, and Miss Draycott lets me read hers. But don't tell anyone, or she might get into trouble."

"Who is Miss Draycott?"

"The music mistress. She's quite young and very nice."

"You mean she isn't scandalised by your unfeminine interest in politics?" he teased.

"Seeing as Papa is an MP, she is understanding about it. Besides, the man she loves is also in politics, or at least, he intends to be."

But Rosina shook her head.

"I can't tell you that. It isn't my secret. I shouldn't even have told you her name, and I wouldn't have done so if I'd been thinking properly. Please forget it."

"Very well. But I hope for her sake that this man has money."

"He hasn't," Rosina said with a sigh.

"Then what are they planning to live on?" he demanded. "Even if he secures a seat in Parliament, he won't be paid. MPs don't get a salary, so he'll need another job. Perhaps he's a lawyer, or something like that?"

Rosina's father was a successful lawyer who, for years, had combined a prosperous legal practice with sitting in the House of Commons. Sir John himself was a wealthy landowner who did not need to earn money.

"He isn't a lawyer," Rosina said now with a sigh. "He meant to be, but he failed his bar exams. His health was poor at the time," she added hastily, "and it wasn't his fault."

The AI War by Stephen Ames Berry
Cadaver Island by Pro Se Press
One Snowy Night Before Christmas by Pamela Fryer
Creative License by Lynne Roberts
The Ice Queen: A Novel by Nele Neuhaus
Born at Dawn by Nigeria Lockley
Lord of the Mist by Ann Lawrence
Fish by L.S. Matthews
Two Family Home by Sarah Title
Bachelorette for Sale by Gail Chianese