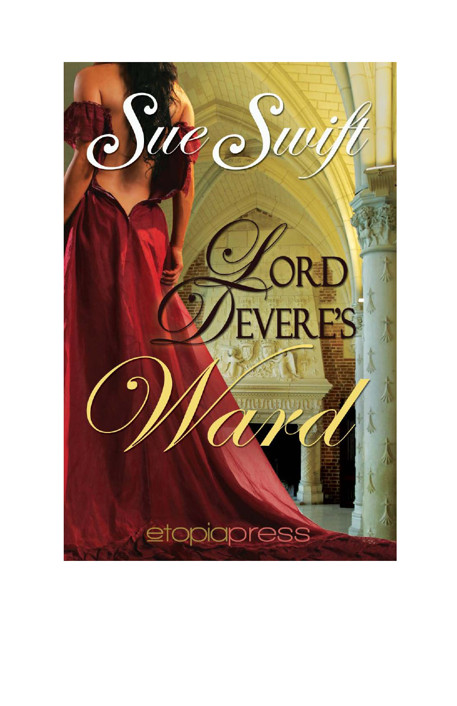 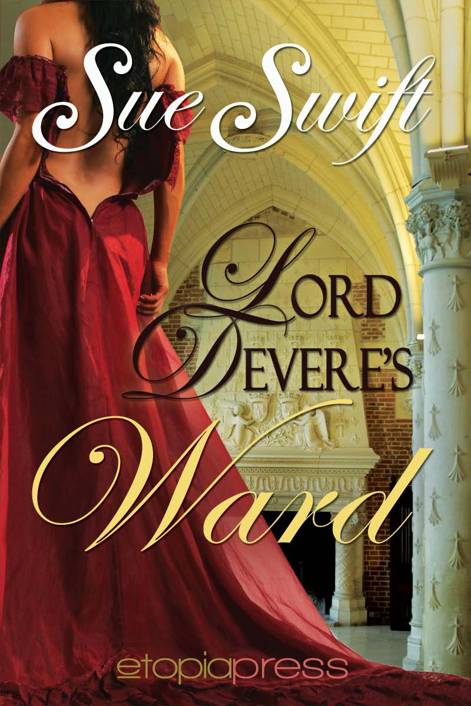 ~ Look for these titles from Sue Swift ~

EBooks are not transferable. They cannot be sold, shared, or given away. The unauthorized reproduction or distribution of this copyrighted work is a crime punishable by law. No part of this book may be scanned, uploaded to or downloaded from file sharing sites, or distributed in any other way via the Internet or any other means, electronic or print, without the publisher’s permission. Criminal copyright infringement, including infringement without monetary gain, is investigated by the FBI and is punishable by up to 5 years in federal prison and a fine of $250,000 (http://www.fbi.gov/ipr/).

This book is a work of fiction. The names, characters, places, and incidents are fictitious or have been used fictitiously, and are not to be construed as real in any way. Any resemblance to persons, living or dead, actual events, locales, or organizations is entirely coincidental.

Kate Scoville kicked and flailed her feet, struggling to grip the tower wall with her oversized boots. She whispered a hasty prayer in the chance that the Almighty paid attention to her small corner of His world. Wearing clumsy, borrowed gloves, she grasped the rope tied to the attic window and pushed her boots against the side of the tower, seeking purchase on the wall.

At last, her toes found a mortared joint between two massive blocks of stone. She breathed deeply until her racing pulse steadied. The chill air knifed her lungs. She could see her breath, small puffy clouds, when she exhaled.

She looked down and gulped. Three far stories below her, the slate roof of the abbey gleamed, pale and frosty in the moonlight.

She tried not to utter curses damning her wretched uncle, whose treachery had brought her to such desperate straits. First he’d torn her away from her beloved home in Somerset. Then he’d nagged her to marry his beef-witted son, Osborn, until she thought he’d drive her quite out of her mind. Locking her in an icy tower attic until she cooperated had been the proverbial last straw.

She inched her boots down the tower wall. The short sword she wore on her belt beat against her side with every halting step as her cape flapped around her knees. She finally attained her immediate goal: the abbey’s second-story roof. Still clasping the rope, she crept across the slippery slates. If she reached the edge of the roof without mishap, she’d climb down to the ground by way of a convenient vine or tree.

At the end of the rope, she released it with a shaky, nervous hand. A few steps later, her feet flew out from under her. Yelping, she fell with a bump to slide down the pitched roof, scrabbling for a hold.

Scant feet from the brink, she plunged into a black gap. Her cape caught on the rough edges and timbers of the roof, breaking her fall. Despite her clinging garb, she plummeted through the hole, too shocked and frightened to scream.

“Oof!” She landed on a wooden floor, which emitted a massive boom as she hit. Her body clenched, and she whimpered in mingled fear and pain, realizing she could have been badly hurt had she fallen on her sword. She rubbed her left side through her doublet. She’d be bruised the next day, but didn’t have time to sit and bemoan her aches and pains.

Heat from her exertions flooded her body. She controlled her trembling, stood, and then looked about, recognizing the ballroom on the abbey’s second floor. She adjusted her borrowed clothing, the costume of a Tudor boy she’d found in the attic. She’d donned it knowing that a doublet, hose, boots, and cape were more practical garb for escaping from a locked tower room than her usual bulky gown and soft shoes.

She prayed that no one had been awakened by her noisy advent into the cavernous ballroom. The entire household should have been roused by the din she’d made. Perhaps God did listen.

Kate smoothed her hair with a quivering hand whilst considering her situation. She was tired, sore, and frightened, but she was now only one floor away from freedom. She could leave through any of the large windows lining the ballroom to climb down to the ground. She wasn’t sufficiently bold to use the front door.

She twisted the latch of the nearest window, pushing it outward. The hinges squealed, an unnerving sound which kicked up her heartbeat to a gallop.

But still, no one was roused. No one raised an alarm. With relief, she remembered the sordid habits of her uncle and his whelp. Herbert and Osborn were undoubtedly sleeping off last night’s libations. The servants, as undisciplined as their masters, were doubtless in no better condition.

How could her grandfather have made such a foolish choice? She’d lived with him since the deaths of her parents, and surely he must have been aware of Herbert’s predilections. The odd arrangement her grandfather had created in his Will left her in her uncle’s custody until her coming-out, but had made her the ward of an Earl in faraway London, an older fellow she’d met but once. “Grandfather must have gone dotty at the end,” she muttered.

She cast aside her fruitless reflections. Stepping through the open window to the terrace outside, she flipped a leg over the balustrade near a pillar, which was covered by a sturdy ivy vine. Digging a boot between its twining, woody stems, she used it as her ladder to reach the snowy ground below.

She dashed over the snow without a backward look, hoping that no one from the house observed her dark shape stumbling across the bright, white field.

The front gate was locked, but she found a spot where the current Earl had neglected the upkeep of the walls. She grinned when she saw the tumbledown stones, which proved to be an easy climb.

She headed for the tollgate near Derbeck. All coaches and stages traveling west to Bath or east to London would stop there.

But where would she go?

Kate hesitated as she regarded the imposing door fronting the Earl of Devere’s Berkeley Square townhouse. She hoped that her guardian could relieve her anxiety. She’d felt little else since she’d embarked upon her current perilous course by setting her boots against the frosty stone wall of Badham Abbey’s tower attic.

She drew her hood back. Her hair, untended for days, threatened to slip from its ribbon, and she pushed it out of her face. Lifting the heavy brass knocker, she let it fall. Its boom echoed the frightened pounding of her heart.

However, the mien of the butler who opened the door didn’t impress her. Small and withered with age, the fellow squinted with frank curiosity at Kate, who threw back her shoulders and glowered at his stare.

“Good day, sir.” She knew she sounded like one of the ton despite her outlandish appearance. “Is this the residence of the Earl of Devere?” She wanted to be certain. It wouldn’t do to invade the wrong house.

“Ye-es,” the butler said. “Er, I am not sure if the Earl is receiving.” He eyed her again, disapproval pervading his features. “Who may I say is calling?”

“Indeed?” The butler, moving onto the doorstep, looked up and down the street as if searching for an equipage or a chaperone.

Kate pressed her lips together. She hadn’t come this far to be intimidated by a servant who, judging by his poor vision, probably had trouble finding the door, let alone deciding who should enter and who should not. She slipped past him into the marble-floored entry. A staircase led upward to the first floor, and she could see an open upper hallway, trimmed by carved balustrades.

“Now see here—” His voice raised, the butler grabbed her arm as she spied a uniformed footman, holding a silver salver, leaving an upstairs room.

Shutting the door behind him, the footman looked down at her for a moment, then turned toward the back portion of the house, where she presumed the servants’ stairs lay.

Her destination clear, she tore her arm from the butler’s grasp, inadvertently knocking into a small piecrust table which stood in the entry. The delicate table teetered, then fell with a crash, shattering a vase which had been sitting on it.

A bell sounded as a man shouted from upstairs.

“Bartram! What the devil is going on? You know full well that I don’t allow racket in the house before noon!”

Kate, tussling with Bartram, took advantage of the butler’s temporary distraction to leap up the stairs. Perhaps the owner of the voice would help her in her quest for her guardian. She pushed into the room from whence the shout had issued.

She had never seen a man in his nightshirt. For a moment, time stood still as they stared at each other, Kate’s eyes widening. She felt the blood drain from her face as she looked ’round.

Good God. She was in a man’s bedroom. A large, tumbled bed, complete with four elaborately carved posters, stood to her right. Dressed only in a nightshirt and cap, the occupant of the bedchamber looked at her in the same hungry way a fox targeted a coney for dinner.

The chap did greatly resemble a fox, or perhaps an English setter. Tall and thin, he was a veritable Duke of Limbs. His lank, reddish hair stuck out from a white nightcap which slid down over his forehead.

He had a Roman nose and pale, unshaven skin spattered with freckles, which furthered his resemblance to a spotted white dog. His wide mouth and large, soulful brown eyes completed the comparison.

He had a very nice smile, she concluded, as did all the setters she knew. Though deeply cognizant of the impropriety of the situation, she grinned back at him.

“Forgive me,” she said in her sweetest tones. “I do regret bursting in upon you so abruptly. And forgive my appearance. I realize I must present a strange sight. But, as they say, needs must when the devil drives, and I have certainly been driven by a devil to this guise.”

The man continued to smile at her. “A young lady. Curious. A rather unusual female,” he mused aloud, “but not at all unwelcome, despite her peculiar appearance.” He sipped from a china cup. A full tea service sat on the table in front of him near a window overlooking Berkeley Square.

Whoever this young man might be, he apparently had a taste for the ladies. With her wealth of experience managing her late grandfather’s roistering friends, her anxiety eased a trifle. She could manipulate the situation quite well, thank you.

“Good day, sir.” Scraping together the remains of her dignity, she bowed, for a curtsey would be ridiculous in her present attire. “Can you, er, direct me to the Earl of Devere?”

The High Priestess by Robert, Katee
A Wedding on Ladybug Farm by Donna Ball
Shadow of a Broken Man by George C. Chesbro
Fatal Intimacies (Romantic Suspense) by Ali, Isabelle
Demons Undone: The Sons of Gulielmus Series by Holley Trent
Plain Fear: Forgiven: A Novel by Leanna Ellis
The Professor and the Prostitute by Linda Wolfe
Disciple of the Wind by Steve Bein
Out There by Simi Prasad
The Adventurer by Diana Whitney