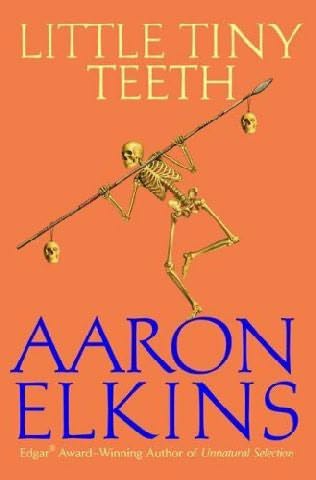 Little Tiny Teeth
Aaron Elkins
PROLOGUE
Peru: The Upper Amazon Basin, August 4, 1976
They knew, being Chayacuros, that the waking world, the world we think we see, is nothing but illusion. The real world, the true bonds between causes and their effects, is revealed only through the ritual drinking of ayahuasca. This they both had done under the ceremonial ministrations of old Chaya. The bitter brew had first purged and purified them, and then the Other World beings had come to guide them.
“They have killed all the plants in their own land, these white people,” the bird-headed spirit-helper had told them through the shaman’s mouth. “Now they come to destroy ours. And then the government will come and burn our village. It is up to you to see that this does not happen.”
They had agreed to undertake the task. For the last three hours, silent and unseen, they had been observing the three white men who had made camp not far from the village the night before and were now stirring. But in the true world, as in the false, there were separate realities; there was room for differences of opinion.
“I say kill them now.” Matsiguenga, the younger of the two, spoke in sibilant whispers, but he smote his naked, hairless chest with his fist for emphasis. “We have wasted enough time.”
The older man, Jabuti-toro, took his time replying, as befitted someone wiser. “No. They may not be from the government. They may be blameless.”
“So what? They are strangers; they have no relatives. Who would avenge them? Who would even know?”
They did not look at each other as they talked, for among the Chayacuro, for one man to look openly into another’s eyes is a deadly insult. They lay, propped on their elbows, peering narrow-eyed through giant, insect-eaten banana leaves and gnarled liana vines at the three men, who sat on the ground in a tiny clearing, their backs against a fallen tree trunk, breakfasting on manioc pancakes and cold coffee. Fifty feet further out, in a rough semicircle, lay another six Indians – younger men and boys, less skilled at hiding, and trailing, and killing, proud to be in the company of the two leaders and eager to learn from them. The youngest, and perhaps the most eager of all, Matsiguenga’s nephew Shako, was not yet twelve.
In La Cosa Nostra, the two leaders, Matsiguenga and Jabuti-toro, would have been known as “made men,” men who had murdered – “made their bones” – to prove their worth as members of the Family. In the equally elliptical language of the Chayacuro, they were kakaram, “powerful ones.” Their power derived from their success at assassination. Both had killed enemies. Both had taken heads.
They were dressed almost identically. Of anything that we would describe as clothing, they had only woven kilts of dyed cotton. But they did not think of themselves as naked. Heavy necklaces of jaguar teeth, boar tusks, nuts, and shells hung in layered profusion around their necks. Their faces were dyed orange-red with achiote, their chests painted in ancient designs with white clay. Sharpened quills of blue and green macaw feathers pierced their nasal septums, and thin bamboo tubes and more feathers ran through their earlobes. Their glossy, black hair had been carefully trimmed into neat bangs and tightly bound with headbands.
Beside them lay nine-foot-long hardwood blowguns, meticulously carved and hollowed out and lovingly polished. Around each man’s neck was slung a palm-frond quiver of darts from which dangled a small woven bag of cottonlike kapok. They were totally unafraid. The ayahuasca had made their bodies hard; they could not be harmed by others.
“I say again,” Jabuti-toro whispered forcefully. “We wait. We do not kill those who are not our enemies.”
Matsiguenga grunted his acceptance, but he had already made up his mind. The intruders would die. Jabuti-toro was getting old; he was more concerned about his wife and his four daughters than he was about protecting the village. His arutam – the soul that sustained and protected him and gave him the courage to fight – was leaving him; everyone could see that. He no longer had the stomach for killing. But Matsiguenga did. It would be up to Matsiguenga to teach the young ones how a man should act.
With the ayahuasca still coursing through his body, he could distinguish the future as if it were the present. Behind the lids of his closed eyes he saw how it would be. He would take the heads from the fallen whites, each with a single, slashing stroke of his machete. If Jabuti-toro wanted none, Matsiguenga would take all three, why not? He would run pieces of cincipi vine through their mouths and out their throats, and sling two of them over his back. The third he would allow young Shako to carry. Shako was impatient to take a head of his own, but he was still too young, too reckless, too out of control for that. Perhaps the honor of carrying a head would slake his thirst for blood for a while.
At the crossing of the River Yapo, where they had cached pottery jars, the shrinking process would begin. He would have Shako assist him. Shako was his sister’s son; Matsiguenga was responsible for his learning. Among the Chayacuro, it was the maternal uncle, not the father, who was responsible for the education of a boy. They would slit the skin on the backs of the heads, then slip out the skulls and put them in the river as gifts for pani, the anaconda. They would boil the skins in river water, dry them, and then turn them inside out to scrape away the “They are moving,” Jabuti-toro said. “They are leaving. We will follow them.” His voice hardened. “If they do not approach the hayo, we will let them go, do you understand?”
“And if they do?”
“Then they must be killed. But wait. Watch. They may not be what they seem.”

Geek God (Forever Geek Trilogy #1) by Victoria Barbour
Hot Decadent Rising (Breath of Darkness) by Stauffer, Candice
Drowning Tucson by Aaron Morales
Deep Into The Night (Hartz Island Series) by Loy, Tracie Ingersoll
Collection 1997 - End Of The Drive (v5.0) by Louis L'Amour
1 The Question of the Missing Head by E. J. Copperman
All She Wants 4 Christmas by Jessica Lee
His and Hers by Ludwig, Ashley
It's a Match by Ana Tejano
Wolf Unbound: Aspen Valley Wolf Pack by Amber Ella Monroe