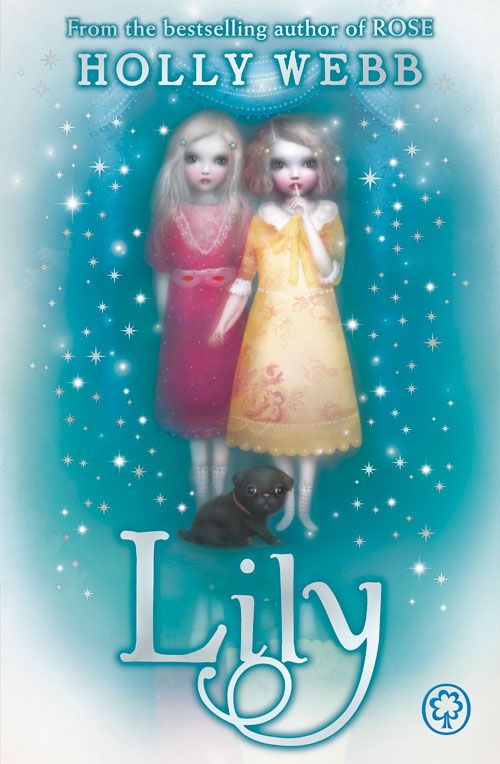 First published in the UK in 2011 by Orchard Books

This ebook edition published in 2011

The right of Holly Webb to be identified as the author of this work has been asserted by her in accordance with the Copyright, Designs and Patents Act, 1988.

Orchard Books is a division of Hachette Children’s Books,

L
ily stared out across the water. It was very early – she wasn’t sure of the time exactly, but the maids had only just been lighting the stove when she scurried out of the back door of Merrythought House. It was full summer, and the sun was hot already, glittering on the ripples. The hard, silvery light seemed to cut a path across the grey-blue sea, so clear a path that it looked almost solid, and Lily longed to step out onto it, and walk across. She stretched out a foot, even, without realising it, and might have stepped into the water, if Peter hadn’t snorted in disgust at her silliness, and grabbed her elbow.

Lily blinked and turned to look him. His arms were folded now, and he was eyeing her, his nose wrinkled up as though he were trying not to laugh. She glared back at him. ‘What? I wasn’t actually going to!’

She sighed, and sat down on the warm stones, opening her book again. She didn’t really understand it – it was a great fat thing about the practice of glamours that she’d found in the china cupboard – but she was trying to. She
ought
to be able to understand. Both her parents were magicians, after all. And her sister was a genius at this sort of thing. So why couldn’t Lily even grow her fingernails a little longer? She stretched out her fingers, but the nails stayed stubby and short, and rather dirty. Lily sighed again, crossly, and gazed out over the water, the view pulling her from the book once more.

From this angle, the path was only sunshine on the sea, and the mainland was the merest smudge of a shadow on the horizon.

‘It did look real, though, didn’t it?’ she said quietly to Peter. ‘I wonder what it’s like, over there.’

Peter stomped away across the stones, and Lily flinched at the angry clatter of the pebbles under his feet. She sometimes forgot that he hadn’t been born on the island, as she had. He knew what the mainland was like, and she shouldn’t have made him remember.

She sprang up, and followed him back to the cliff path, toiling up towards the house. He would have been missed by now, probably. He was stronger than she was, and he reached the top of the path before her, turning to wave once before he raced off over the lawn. Lily didn’t hurry to catch up with him. It was better that they didn’t go back together – Peter wasn’t supposed to be spending his time
running after that dratted girl
. Lily had heard Mrs Porter, the cook, say so the day before. She wandered through the long grass, kicking at dandelion clocks, and watching the seeds puff away on the wind. How far could they fly? They were too hard to follow against the white light of the sky, but perhaps some would float for miles, and grow Merrythought dandelions across the sea.

She was approaching the house, her hands full of dandelions now, blowing the seeds up into the sky, when she stopped dead, her breath catching in her throat. The warmth of the sun seemed to seep away.

A figure had appeared round the corner of the house, too quickly somehow, as though she hadn’t walked, just was suddenly
there
.

Lily forced herself to smile a little, and nod, even though she was trembling, and the woman in the dark dress bowed politely, and stood back for her to pass. It was only proper, as she was a lady’s maid, and Lily was a daughter of the house, but it felt wrong. Lily scurried away, hurrying round the corner. She could feel Marten staring after her, and her gaze clung.

Lily had never been sure what it was about Marten that frightened her so much. Perhaps the black clothes – Marten never wore anything else. A black wool dress, winter and summer, and a veil and gloves, even in the house. The other servants muttered about odd foreign habits, but they were used to her. Marten had been Lily’s mother’s maid for years.

Once she had turned the corner, onto the path that led to the back of the house, and the kitchens, Lily flattened herself into the shadows along the wall, gasping. She wasn’t usually so cowardly, but Marten had crept up on her – or it felt like it. She gulped air, feeling dizzy, and then bolted for the kitchens, wanting warmth, and light, and company, however bad-tempered it might be.

Even though Mrs Porter was in the middle of one of her tirades, the kitchen still felt welcoming after the sudden shadow outside. Peter had been missed then, Lily noted guiltily, as she realised who Mrs Porter was shouting at.

‘Lazy, good-for-nothing boy! Off gallivanting, when we’re near out of firewood! I need to cook madam’s breakfast – French toast, we want, if you please! – and I’ve no fire! Where have you
been
?’

Peter only shrugged, and looked gormless. It was a very useful look, and he was expert at it.

‘And what’s the matter with you, lurking there in the corner, miss?’ Mrs Porter suddenly wheeled round and snapped. ‘You look like you’ve seen a ghost.’

The two young maids, who were drinking tea at the big wooden table, drew in an identical horrified breath, and stared up at Lily.

‘Miss Lily, you didn’t, did you?’ Violet asked, her pale eyes wide.

‘Of course she didn’t,’ Martha murmured, but she was glancing around the darker corners of the kitchen, even so.

‘Not a ghost.’ Lily shook her head. ‘Only Marten. She – she surprised me…’ she added, knowing that she sounded foolish.

Mrs Porter made a dismissive noise. ‘What would surprise me, Miss Lily, would be if you would keep yourself out of my kitchen for a morning, and stop leading this boy off on some wild goose chase just when I need him.’

‘Sorry…’ Lily whispered, backing towards the door. Mrs Porter had been scowling down at a spikily written little note lying on the scrubbed wooden table. It was Mama’s writing. Lily had been avoiding going anywhere near her mother for weeks, and it seemed that Mama’s bad temper was now making itself felt to the servants as well. She was sure that even the air was shimmering slightly, filled with a furious magic that rubbed everyone’s nerves raw.

‘Oh, stay still, girl!’ Mrs Porter shoved an old napkin into her hands, and then snapped at Martha to fill it with some bread and cheese. ‘Now, get upstairs, where you belong!’

Lily whisked out of the kitchen without begging for anything else – when Mama was demanding fancy dishes, Mrs Porter had been known to hurl china at Martha, and her aim wasn’t good.

‘Miss! Miss Lily!’ Martha was hissing after her as she hurried through the dark passages away from the servants’ quarters. Lily turned back anxiously. ‘What is it, Martha? Don’t let Mrs Porter catch you. She’s in enough of a mood as it is.’

‘Here. A mouse wouldn’t last on that morsel of bread and cheese.’ Martha stuffed a handful of biscuits and an apple into the napkin as well, and kissed Lily’s cheek. ‘Stay out of the kitchen, you hear? The old dragon’s fit to burst. Madam keeps complaining, and Mr Francis disapproved of the rabbit from supper last night.’ Martha sniggered. ‘He’s not even set foot in the kitchen today, he’s hiding in the butler’s pantry, says he’s counting the silver cutlery.’

Lily hugged Martha. ‘I won’t come near, I promise. Make sure you duck if she picks up the copper preserving pan, won’t you?’ She waved to Martha, and hurried away, biting into the apple gratefully. She was making for the orangery, one of the rooms that everyone else at Merrythought House had forgotten about. It had been a beautiful glasshouse once, with a fountain, and a pretty enamel stove to keep the trees warm, but they had all died long ago, and the fountain was blocked up with leaves. It was the perfect place to hide away.

Lily rubbed at a patch of charcoal with her hand, smudging the drawing out. It wasn’t good enough. It didn’t look real. She sighed, and tucked her knees up under her dirty old dress, hugging them, trying to work out where the drawing had gone wrong. Her dress was filthy, she noticed, and she brushed uselessly at some of the stains on the faded blue and white cotton. But the dirt wasn’t just charcoal, it was weeks of wear, and the frock was too short as well. It hardly covered her knees, and the buttons were pulling. She needed a new one, but that would mean asking.

Oral Literature in Africa by Ruth Finnegan
Manwhore 2: The Ferro Family by H.M. Ward
Set Me Free by London Setterby
[Hurog 01] - Dragon Bones by Patricia Briggs
The Messenger by T. Davis Bunn
Stepping into the Prince's World by Marion Lennox
The Moon Stealers and The Children of the Light by Flanagan, Tim
Through the Hidden Door by Rosemary Wells
Bitterblue by Kristin Cashore
Just Want Somebody to Love (Bella Warren Book 1) by Keri Ford