Read Lie to Me Online 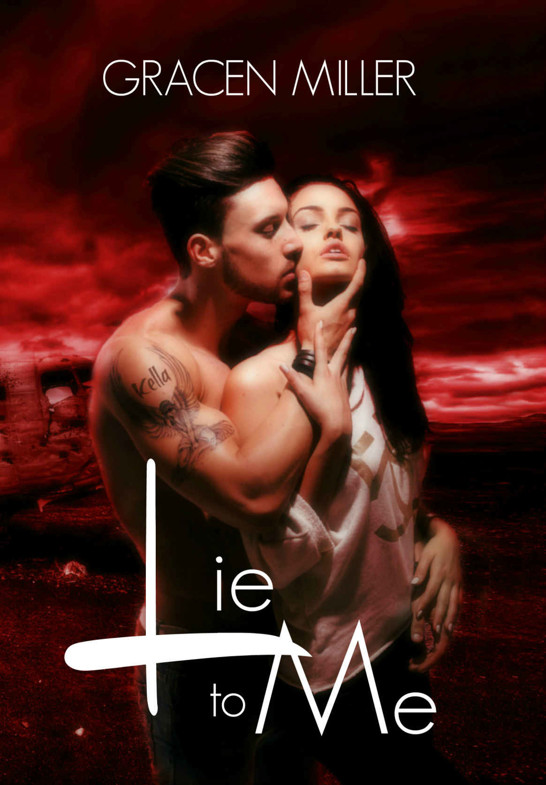 OTHER BOOKS | BY GRACEN

The unauthorized reproduction or distribution of this copyrighted work is illegal. Criminal copyright infringement (including infringement without monetary gain) is investigated by the FBI and is punishable by up to 5 years in federal prison and a fine of $250,000.

This book is a work of fiction.  Names, characters, places, and incidents are the products of the author’s imagination or used fictitiously. Any resemblance to actual events, locales or persons, living or dead, is entirely coincidental.

C
over art designed by Brannon Jones at B-Dirty Graphics

All rights reserved. Except for use in any review, the reproduction or utilization of this work, in whole or in part, in any form by any electronic, mechanical or other means now known or hereafter invented, is forbidden without the written permission of the publisher.

The author acknowledges the copyrighted or trademarked status and trademark owners of the following wordmarks mentioned in this work of fiction: Sweet Home Alabama, Lynyrd Skynyrd, Bluetooth, Glock, M-16s, and any and all others that I might’ve missed.

Look for me online at:

K
athryn Grimes—without you this book would’ve never happened. Thanks for the discussions and helping me get on solid footing with the dystopian world. Also, thanks for all the cover art exchange and mock up. I doubt the cover would’ve turned out as good as it did without your intervention. Mostly, thanks for being not only my best friend, but someone I can count on in life too. I love you, bestie!

Thanks to my betas, Kathryn Grimes and Mindy Janicke, for taking time out of your life to read and provide me honest feedback. The story shines because of the holes you found.

T
his book has been simmering in my mind for a couple of years. A lot of fears held me back from breathing life into Kella and Stone’s story. Dystopian romance isn’t a genre I read, and I have no idea if I did the genre justice in Lie to Me. Yeah, I watch the movies and love them, but writing a future world that’s gone to hell is an entirely different thing than watching movies. I feared the world building and worried I wouldn’t be able to pull off a futuristic world as easily as I can a paranormal world. I also worried about political correctness and upsetting readers with the slavery issue. I hope I haven’t offended anyone because that wasn’t my intention. My only objective was to do justice to Kella and Stone’s story, while hoping readers will connect with them the way I did.

From the moment I committed to writing Lie to Me these characters seemed like old pals. Not just old pals, but like best friends, or even, as crazy as it sounds, a life I’d lived. I
knew
them inside and out, everything that made them tick, and every quirk that irritated me, and probably will the reader too. This was a novelty for me. Typically I get to know the characters as I write them, much like when I read a book. But in Lie to Me, the world and the characters were vivid in a way none have ever been before.

Writing Lie to Me has been an adventure, and I’ve loved every moment of our journey. I’m a little sad that our journey is complete. Who knows maybe you’ll see the cast again in a future book. In any event, happy reading!

B
io-shield – A shield that straps on like a bracelet, but once activated covers the individual with compressed air and chemicals and allows them to enter hot zones without suffering the consequences. Similar to our bulky bio-suits, but the wearer can move about freely and touch items and/or people without danger of being contaminated.

Kippy – A puppy and kitten crossbred by the ancients but outlawed fifty years ago.

Quadrant/Quad – The world is broken up into Quadrants instead of states.

Regent – Title given to rulers of Quadrants. They inherit their kingdom through their father, and their leadership is one with complete authority.

Xeno/X-Gene – A gene passed down to females. The gene denotes someone with immunity to all diseases.

X-Diplomats/X-Ds – Title given to those who are part of the revolution.

Vanity Chip/V-chip – Illegal technology created by the ancients to alter one’s appearance. Unlike plastic surgery, a vanity chip can change a person’s appearance altogether. The V-chip can also be deactivated or the user can alter their appearance at their whims.

No climactic event for humanity’s narcissism.

No nation was to blame.

Man raced for a cure.

The world perished just the same.

Her breath emerged in gasps, but pride had her choking back the tears that’d display her terror. Despite her approaching meltdown, the caretaker guiding her revealed no sympathy. He tightened his grip on her arm, his fingers pinching into her skin hard enough she knew she’d find bruises tomorrow. Most likely five oval prints staining her skin.

Stone-faced, he hauled her to the auction block. Merriment surfaced around her from the crowd that’d arrived for her sale. A celebration of this magnitude required not only champagne but also caviar and other fancy finger food. Voices tittered as well-dressed men and women sipped from their flutes, their gaiety an unnatural backdrop to her distress. Diamonds glittered in the lighting, a gaudy display of wealth when so many low-class dregs perished from starvation.

Lightheaded, she stumbled, and her warden’s hold intensified, stinging. Kella winced and reminded herself...
just breathe
.

In the surreal moments as he towed her to the stage, she felt a little outside herself with a weird buzzing in her ears, and was almost thankful for his support. On that block, she’d lose all sense of self and identity, freedom would be lost to her, to become some man’s breeding stock.

Bile stung the back of her throat, but somehow she managed to force down the digestive fluid. She prayed her best friend since she was six, Stone Emmerson, missed this debacle. His presence would be the ultimate humiliation. But his duty as the Regent’s son, and heir apparent, required he watch her auction. Sold to the highest bidder, a stark reminder of her low-class birth.

“I don’t want this,” she pleaded with the caretaker, praying someone would recognize the injustice of this act and save her from indignity. But she was a dreg. Nothing special. And in in her world, dregs held no voice, save the one their Regent gave them.

Kella might not be as bright as her betters—if she ever forgot, they all reminded her of her lack of intelligence, so it was best not to forget her place in the world—but as the daughter of a house servant to Regent Peter, she’d been educated alongside prodigal sons and daughters. The best she could tell from history,
no
Regent or elitist had
ever
done anything for the good of a dreg. At least not since the pestilence had ripped their world apart. Humanitarian efforts had died in the wake of their near extinction. All decisions handed down by Regents went in the favor of those in power and with money.

The guardian jerked her about, turning his back to the crowd, and hiding her from their eyes. “Do your duty to the population, little girl, and don’t whine about it.”

Her stomach churned, threatening to embarrass her worse. Even dreg-born, worthless girls like her possessed dignity, and she really didn’t want to embarrass herself further by spewing vomit all over the crowd. Mouth watering, a sure signal she would blow any second, she swallowed several times in hopes of keeping down the stomach acid.

I’m about to be sold and become the property of some nameless stranger
. All because of her freakin’ genetic makeup.
Lucky me. Fate is a cruel bitch
.

On December 21, 2121, humanity became a significant extinction event thanks to one disease manmade for genetic warfare. With a ninety percent mortality rate, the pestilence had been deemed a success. Until the plague spread across the world without care for enemy or ally. Scientists scrambled to find a cure, but fell to the infection and died in their labs. Leaders around the world quarantined the infected into hot zones and nuked them, hoping to not only kill the spread of disease, but the virus too. Those hot zones remained, the disease still active, and were so radioactive none but Xeno’s could enter those regions without suffering ill effect.

The original disease had altered women, seventy to eighty percent born sterile. Even the healthy, reproductive women often gave birth to malformed, stillborn infants. In the old days, those that’d been fertile had been auctioned off to the highest bidder. The deformed infants that survived had been left to die in the hot zones since they couldn’t breed into the populace. That period of history had been about protecting humanity, surviving.

The world moved on, times changed. More and more women could procreate, at least half the population could propagate, and purchasing breeders had been outlawed. Then a new gene emerged, called Xeno for the scientist that discovered it. X-gene as it’d been christened, was as effective as a miracle drug. All girls with the genetic factor produced female offspring with the same gene. Instead of freeing humanity, those who possessed the genetic factor became slaves to elitists desperate to save their line.

Mandates by Regents forced all fourteen-year-old girls to submit to mandatory DNA testing. Kella had gone yesterday. One in ten thousand tested positive. The odds were against her. Her best friend, Stone, had promised they’d celebrate her birthday with her favorite rainbow cake when she returned.

Instead of celebrating, she’d been given the grave news that she possessed the X-gene. The moment she tested positive, she’d become the property of the Regency to be auctioned off to the highest bidder among the rich and spoiled. No commoner could bid, and none of the rich who tested positive were forced to the auction the way the dregs were.

Only us without a voice must submit to the injustice
.

EMMETT (The Corbin Brothers Book 3) by Lexie Ray
The Liger's Mark by Lacey Thorn
His Prize (The Cleaners Book 1) by Doris O'Connor
Gilgamesh Immortal (Chronicles of the Nephilim) by Brian Godawa
[Firebringer 02] - Dark Moon by Meredith Ann Pierce
My Christmas Stalker by Donetta Loya
The Four Forges by Jenna Rhodes
Fang: A Maximum Ride Novel by James Patterson
Together always by Schulze, Dallas
A Montana Cowboy by Rebecca Winters