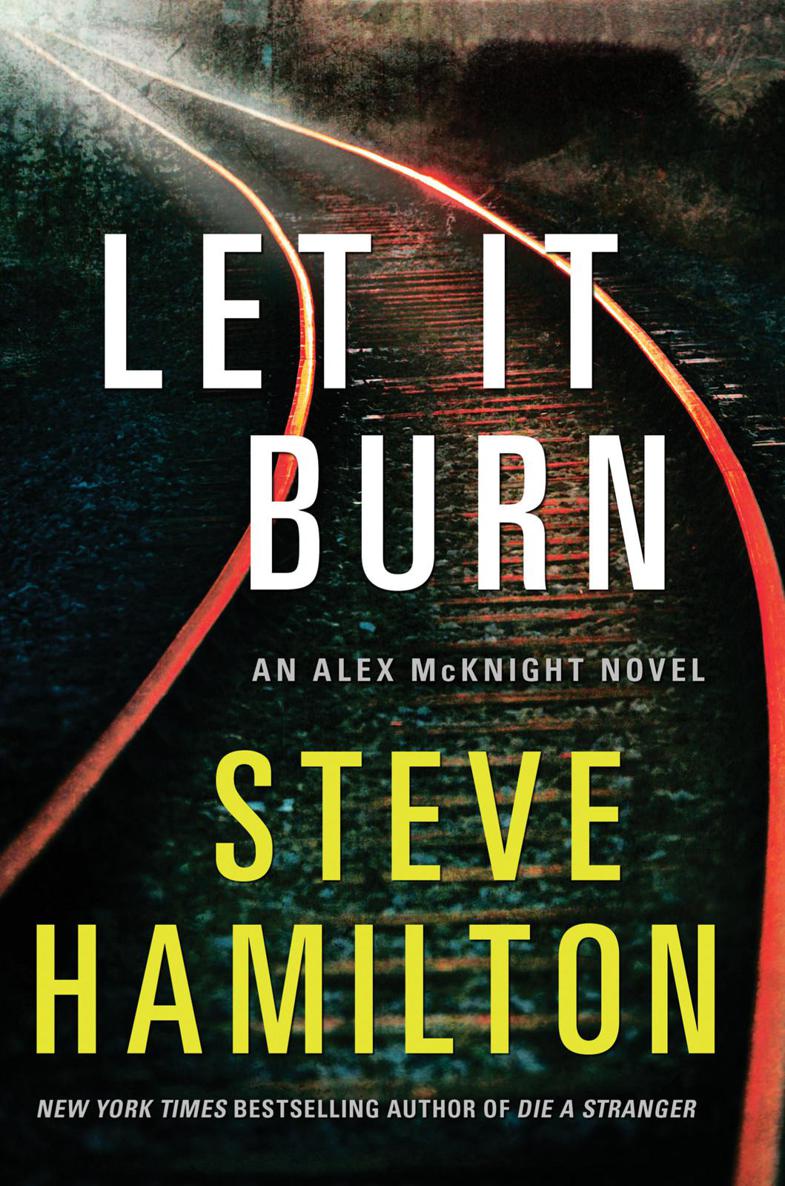 And, as always, to the memory of Ruth Cavin.

Finally, to Julia, who doesn’t even know how beautiful she is, to Nicholas, who grew up way too fast, and to Antonia, who can do anything in the world.

The first time you live through it, and because this place still has the “MI” as part of the address, you might actually expect the summer to fade away slowly like it does below the bridge. Down there, on a crystal blue day in September, the sun shining hot and bright until it starts to go down, you might feel a slight note of coolness in the air, a note that makes you think of football and back-to-school and leaves turning and all those other bittersweet signs that the season is changing. Something so subtle you might even be forgiven for missing it the first time it happened. Especially if you didn’t want the summer to end.

Up here, on the shores of Lake Superior, there’s a cold wind that gathers from the north and picks up weight as it builds its way across two hundred miles of open water, and then, on a late afternoon in August—hell, sometimes in July—that wind hits you square in the face and makes its intention quite clear, no matter how much you might not like the message. Summer may not be one hundred percent done, not just yet, but it’s been mortally gutshot, and it’s only a matter of days until it’s gone.

It was late August this time around. Actual
late
August, meaning an absurdly long summer. I’ve got six cabins stretched along an old logging road, built by my father, and in the summer I rent them out to a particular brand of tourist who wants to get away from everything without actually going to Canada or Alaska. They’re mostly repeat customers, because there’s something about this place. While they’re here, they might go around the corner to Tahquamenon Falls, or all the way up to the Shipwreck Museum on Whitefish Point, stand there and look out at the vast expanse of water, maybe think about the
Edmund Fitzgerald
resting just a few miles out there, five hundred feet below the surface. Come back and spend some time at the Glasgow Inn. That’s summer in Paradise.

I was at that very same Glasgow Inn that night. I was sitting at the bar, instead of my usual place in front of the fire, having given up my chair and the chair opposite to a couple from Wyandotte. They were staying in one of my cabins, and when they asked me where they should go to eat, I directed them here for Jackie’s famous beef stew. After that and a couple of cocktails, they looked to be quite content, just sitting by the fire and looking at each other.

As for me, well … There was nobody for me to look at. I had just felt the northern wind and had come in to inform Jackie that summer was on its last legs, something he never enjoyed hearing. Which might be why I always made a point of being the one to tell him. We have that kind of relationship, I guess. I bother him on a nightly basis, and in return he complains to me about everything in the world, including my own presence in his bar.

Oh, and once a week, he drives across the Internationl Bridge to bring me back a case of real Canadian Molson.

“I don’t think I can take another winter,” he said to me, as he banged down one of those Molsons on the bar top.

“You say that every year.”

“This time, I mean it.” He’d been here in Paradise, Michigan going on thirty years now, and yet he still had that Scottish accent. He’d tell you that he’d lost it, of course, that he sounded just as American as I did. Just one more thing he was wrong about.

There was a television above the bar. The sound was off, but I was watching the Tigers play the Rangers. It was a home game, in what I still thought of as their brand-new ballpark, even though it had been a few years now. Comerica Park, one of those new-style parks that opened up into the city, showing off all of the downtown buildings I had once known so well. Three hundred miles from where I was sitting, and what felt like a thousand years ago.

“They have rattlesnakes there,” I said, not taking my eyes off the television. “And scorpions.”

Jackie scoffed at that, but I could tell the idea had gotten to him. There weren’t any rattlesnakes or scorpions crawling around when he was growing up in Glasgow, and as for Paradise … Well, they might have a few eastern massasauga rattlesnakes downstate, but you’d probably never find one in your bed up here.

“Summer’s supposed to last more than a goddamned month,” he said. “That’s the part I just don’t know if I can live with anymore.”

“I think we had double that this year. Besides, you
love
the winters up here.”

He just stood there looking at me, bar towel in hand, like he was ready to smack me with it.

He shook his head, looking tired, like winter had already begun.

“Seriously,” I said. “You love winter because you know this becomes the best place on earth. This bar, right over there by that fireplace.”

“With your sorry backside parked in front of it every night, ordering me around. You’re right, it doesn’t get any better.”

He looked over at the couple by the fireplace.

“How old do you think those two are, anyway?”

“Hell if I know.” I turned to give them a quick once-over. “Forty, maybe?”

“Forty years old and they’re sitting there looking at each other like they’re on their honeymoon.”

“Second honeymoon,” I said. “That’s what they told me. They wanted to go to the most out-of-the-way place they could find without having to fly.”

“Which cabin do you have them in?”

“The last one. Now that I finally have it finished.” Meaning rebuilt and refurnished, after somebody burned it down for me.

“End of the line,” he said, nodding his approval. “Won’t be a soul bothering them there.”

“Smartass.” He turned away from me and started cleaning some glasses. This was the man who had survived the worst marriage in the history of mankind, to hear him tell it. Yet here he was, getting downright wistful at the sight of a man and a woman who were obviously married and didn’t seem to hate each other.

Then it occurred to me. This was a bar in a town that saw its fair share of hunters in the fall, snowmobilers in the winter. Which means lots of men. Bird-watching had become the big thing in the spring lately, meaning mostly women. Then families in the summertime. A mom and a dad, yes, but also a couple of kids along to complain about how their cell phones don’t work up here. The one sight you
don’t
see too often in Paradise, Michigan is a moony-eyed couple, whether on their first honeymoon or their second.

The man caught my eye and raised his glass to me. I raised my bottle of Molson in return.

I’d been married myself once. A long time ago, to a woman I met when I went to college after baseball. A woman I didn’t have much in common with, aside from the “Mc” in our last names. Jeannie McDonald, who became Jeannie McKnight, who went back to being Jeannie McDonald again. Who may have then remarried and changed her name yet again. I’m ashamed to say I don’t even know if she did, or if she still lives in Michigan. If we had had children together, the story would be different, I’m sure. Or if I ever paid a cent of alimony. At least that way I would have had an address to send checks to. As it was, she just left. Just walked away. I got the divorce papers in the mail, I signed them, I sent them back to her lawyer, and then we were done.

I wonder if she feels guilty. Wherever she is now, whoever she’s with, I wonder if she looks back at the way she bailed out on me a few weeks after I got shot and has any regrets.

Hell, I wonder if I’d even hold it against her now. I think I knew, way back when, that we’d never last, shooting or no shooting. I think we both knew.

I sat there at the bar, looking at my bottle as the Tigers played in silence above my head. There’d been a few women in that lost year after I left the force. Then I’d come up to Paradise thinking I’d sell off my father’s cabins and had ended up staying here. Something about the place had spoken to me. Like this is where you really belong, mister. In the midst of these trees bending in the wind. On the shores of this cold lake. This stark lonely place on the edge of the world, which also turns into the most beautiful place on earth for the few days they call summer.

Then there was Sylvia, the wife of a rich man who thought I was his friend. Then Natalie, a cop from Ontario, someone who’d lost her partner, just as I had. Someone who may or may not have turned out to be the right person for me, if I had ever gotten the chance to find out.

I put the bottle down. This is not where you want to be going tonight, I said to myself. This is not going to make you feel one little bit better about going back to that cabin alone.

“What’s with you?” Jackie said.

He narrowed his eyes at me like he wasn’t buying it. Which made it feel like the right time to leave. A minute later I was outside in the cold night air, looking up at the stars and listening to the soft waves just behind the tree line.

I got in the truck and took the left turn down that old logging road, deep into the woods, passing my one neighbor’s cabin. Vinnie Red Sky Leblanc, a blackjack dealer over at the Bay Mills Casino. He’d gotten into some trouble, and I’d been watching out for him. The lights were on at his place, and everything looked normal, so I gave him a honk and kept driving. My cabin was the first, the one I’d helped my old man build back when I was eighteen years old and on my way to play Single-A ball. Back when I was young, stupid, and full of energy, and I didn’t have a nine-millimeter slug sitting half a centimeter from my heart.

Undercover Virgin by Becky Barker
Behind the Sun by Deborah Challinor
Why Evolution Is True by Jerry A. Coyne
Revenge by Lisa Jackson
Beary Guarded (Polar Bliss Book 2) by Ruby Shae
Clueless (Keeping Secrets) by Roman, J.
The Secret Lives of Married Women by Elissa Wald
OMG... Am I a Witch?! by Talia Aikens-Nuñez
An Antarctic Mystery by Jules Verne
Indecent Experiment by Megan Hart