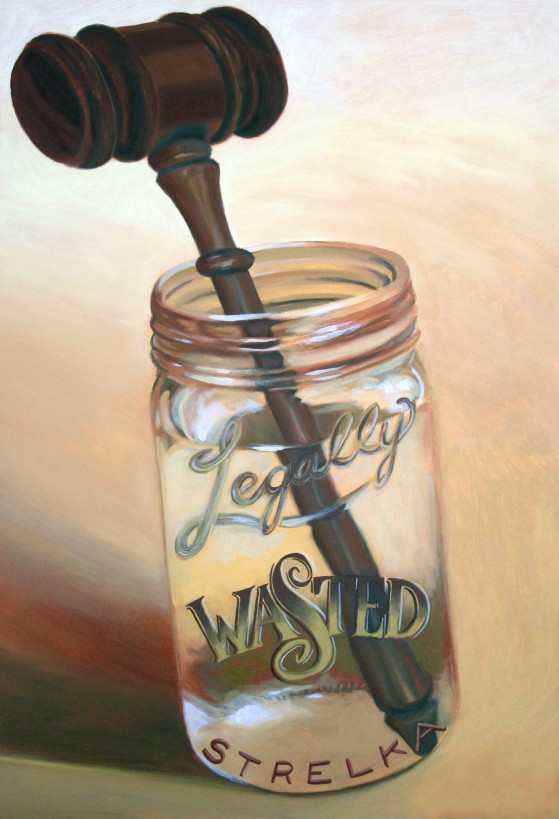 THIS EBOOK IS LICENSED FOR YOUR PERSONAL
ENJOYMENT ONLY. THIS EBOOK MAY NOT BE RE-SOLD OR GIVEN AWAY TO
OTHER PEOPLE. IF YOU WOULD LIKE TO SHARE THIS BOOK WITH ANOTHER
PERSON, PLEASE PURCHASE AN ADDITIONAL COPY FOR EACH RECIPIENT. IF
YOU’RE READING THIS BOOK AND DID NOT PURCHASE IT, OR IT WAS NOT
PURCHASED FOR YOUR USE ONLY, THEN PLEASE RETURN TO SMASHWORDS.COM
AND PURCHASE YOUR OWN COPY.

|On Tap and On
the House|

“Did you make up your mind?” Larkin whispered
into Madeline’s ear. She did not wear any perfume but carried that
sweet smell wrapped around her like a fur. Cinnamon. Her lips
pursed as her eyes continued to stare at the witness stand not
twenty feet away. “You do realize that you have to plead along with
me?” Larkin continued.

She whispered something too faint to hear.
Larkin leaned in close. “What?”

“It’s my decision,” she said, meaning that
she had already made up her mind. “And keep your voice down. That
bailiff keeps looking at you.”

Larkin rolled his eyes. It had been a perfect
evening. The Blue Ridge Parkway at dusk with a picnic blanket,
bottle of champagne, and the biggest diamond ring that a librarian
could afford. The country’s oldest and most gentle mountain range
loped and sloped into oblivion. A dying orange sun warmed the
ridge.

“Your hand seems a little plain considering
how it looked the other night,” said Larkin. He could care less
about a bailiff.

Madeline twisted her body away from him and
stared out the nearby window. Apparently the view overlooking the
federal courthouse parking lot was far more interesting. Larkin
breathed deeply and ran his fingers through his thick brown hair.
The people around him fought against their plain wooden seats
creating a small din of creaks and groans of benches. With a small
forest’s worth of glossy dark wood crammed into every corner of the
courtroom, Larkin had half-expected the room to smell like a
spilled jug of pine-scented cleaner. But the air was thick and
musty, and the room smelled not unlike the small public library
where he spent forty hours each week. He imagined row upon row of
aging leather bound legal tomes lining the walls of the secure
rooms where the public was not invited. Secret knowledge. The law
fascinated him, and it was only something he had just realized.

“I love you, baby,” said Larkin after a
moment, “but you’re going to sink my ship here.”

The back of Madeline’s head shook from side
to side.

“Sweetheart,” he said in his gentlest voice,
“you’re going to have to trust me on this.”

Her shoulders sagged a bit. He momentarily
lost his breath as he remembered the last time her body had reacted
with such a sigh. “Don’t think about that now,” he said, mostly to
himself. “Let’s just get through with this and we’ll figure out the
whole thing.”

Madeline turned. “You’re too damned smart,”
she said. “Either that or you can read my mind.”

Larkin smiled. “And you’re wiser than me. And
right now your heart is screaming at your brain to trust me.”

Madeline nodded. “It might be,” she
whispered. “But what we did was wrong.”

“We did not break the law,” said Larkin, “and
besides.” He drew closer and placed his hand upon the fabric of the
conservative church dress she had worn to court. Despite the broad
lines and length of the dress, it had utterly failed to conceal one
of the most beautiful women in Virginia. He brushed his fingertips
against the material until his index finger rested about an inch
above her left knee. “What we did that evening was so very
right.”

Madeline rolled her eyes and returned her
gaze to the parking lot. Larkin smiled. “Not guilty, love. You can
spend the whole rest of our lives together being right and I’ll be
guilty of whatever you’d like. Just give me this, okay, baby?”

Judge Wexler nodded to the dozens of people
anxiously waiting for their name to be called. A small woman in her
early fifties, she gave her courtroom staff a warm smile as she
took her place behind the bench. Her bright red hair was scooped up
into a neat bun. Bright green eyes surveyed her courtroom.

“Please be seated,” she said with a nod.

As the sounds of shoe shuffling and creaking
benches filled the air, Larkin leaned in close to his maybe-fiancé.
“Not guilty,” he whispered, but he packed as much force into it as
a whisper could bear. She shot him a too quick glance. For a
moment, Larkin wondered if she could smell the bourbon on his
breath. He had brushed his teeth twice. And like the telltale
heart, he could suddenly
feel
the swishes of the small
plastic bottle of Jim Beam in his coat pocket.

“No talking in the courtroom,” said one of
the bailiffs. Larkin answered the bailiff with a little wave. He
turned back to Madeline. The questioning glare was gone. Perhaps it
had never existed in the first place. Either way, Larkin was
relieved not to have lost the day before the trial had even
begun.

“All those here,” announced Judge Wexler,
“should be here due to criminal or traffic violations occurring
while on the Blue Ridge Parkway. If you’re not here for that type
of case, then you need to step out and speak with the clerk at the
clerk’s office.” The Judge had mastered the art of broadcasting her
voice clearly across the courtroom while maintaining a
conversational tone.

Everyone in the courtroom stood their ground.
The Judge glanced in Larkin’s direction, possibly because one of
the bailiffs seemed itching to smack him with his baton. Larkin
nodded and surprisingly, the high and mighty federal Judge nodded
back.

“Ladies and gentlemen,” the Judge began as
her fingers flipped through paperwork, “I’m about to ask you how
you will plead in your case. This is the point where you enter a
plea as to the charge or charges against you. If you plead guilty,
I will sentence you. If you plead not guilty, you will have a
trial. I will then hear the evidence that the United States
government has prepared against you. It will be their burden to
prove beyond a reasonable doubt that you are guilty of the crime
charged. I will hear whatever evidence you would like for me to
hear and then I will make my decision.”

“Not guilty,” Larkin repeated under his
breath.

“No,” snapped Madeline, but not with words.
And with the same slight twist of her neck with her arms crossed,
she said, “Guilty,” without really saying it at all.

“If any of you here today would like to plead
guilty to your charge or charges,” said the Judge, “please stand
and approach this first row of benches in front of my bench.”

Madeline delicately picked Larkin’s
inappropriate finger off of her leg. She began standing.
“Madeline,” Larkin said, his eyes wide, “no.”

Madeline took advantage of his hesitation and
quickly brushed past him. He lunged and grabbed the strap of her
purse. Before she had both feet in the center aisle, he gave a
sharp tug. Madeline yanked the purse back to her shoulder, but
Larkin refused to release his grip.

“That’s it,” said the nearby bailiff as he
fingered his baton. He began striding toward them.

“Keep your weapon holstered.” The Judge had
lost the more civil tone adopted for the intro. She was the Captain
and the collective mass of polished mahogany surrounding them was
her ship.

The bailiff complied and looked back to
Larkin. Madeline tugged and regained control of her purse. She
scurried away from Larkin’s grasp and headed for the bench to join
the rest of the penitent sinners. “Madeline!” shouted Larkin, but
she refused to acknowledge him. Her cheeks flushed red. She was
mortified by the scene that Larkin had created.

“Young man,” shouted the Judge. Her once kind
eyes had been replaced by a fierce glare. “What is the
problem?”

Larkin stood while Madeline sat upon the
bench of the guilty. “Your Honor,” Larkin said as he slowly
approached. “That’s my fiancé.”

Madeline raised her arm in the air in an
apparent effort to straighten the sleeve of her cardigan. However,
as her hand paused and gently rotated so that the entire courtroom
could see that she wore no ring, Larkin finally felt alone on the
battlefield.

“Is there a problem with her plea today?” the
Judge asked.

“Absolutely, your Honor,” said Larkin. He
leaned his knees against the waist-high wooden swing gate just
behind the bench of the guilty. “She is not educated as to certain
areas of the law, your Honor, and I believe that she is making a
mistake.”

A smile sparked at the corner of the Judge’s
mouth but quickly extinguished as she returned to her papers.
Sufficiently straightened, she looked back to Larkin. “And are you,
sir, educated as to certain areas of the law?”

“Well, then you may not speak for this
woman,” she said as she coincidentally finished arranging a neat
stack of papers. She collected the stack in her hands and beat it
against the bench for good measure before passing it to the deputy
clerk seated to his left. A gold bangle bracelet jiggled and
jostled over the Judge’s slender left wrist any time she moved her
hands.

“Your Honor,” said Larkin as he gripped the
gate. It was now or never. “If the Court proceeds with Ms. Simmons’
case without further evidence then the Court is going to be making
a big mistake.”

“What’s that?” asked the Judge. Her eyebrow’s
sunk as she crossed her arms. She studied Larkin for a moment while
the heel of Bailiff Spencer’s right hand rested comfortably against
his skull-basher. “What is your name, sir?”

“I am Larkin Monroe, your Honor. I’ve also
been charged along with Ms. Simmons.” Light laughter rippled
through the courtroom. “I guess that makes me a co-defendant.” The
mini-booze throbbed again in his coat pocket.

The Judge flipped through one of her folders.
“You and Ms. Simmons have been charged with . . .” her eyes scanned
a hidden page, “possession of alcohol on the Parkway.”

“And do you plan on pleading not guilty to
that charge?”

The Judge raised her eyebrows. “It looks to
me like she wants to plead guilty, Mr. Monroe.”

“I’ll make that determination, Mr. Monroe.”
The Judge looked to Madeline. “Ma’am, do you freely, willingly, and
voluntarily plead guilty to the charge of alcohol possession?”

The Judge clasped her hands together. “And do
you make that plea because it is in fact your decision and not the
decision of anyone else?”

“Has anyone forced, coerced, or intimidated
you in any way to make that plea?”

“Are you aware of the maximum penalty that
you will face if you plead guilty and thus require me to sentence
you?

The Judge looked to Larkin. “She doesn’t
sound confused at all to me, Mr. Monroe. I’m going to have to
accept her plea of guilty.”

Walking in the Rain: Surviving the Fall by William Allen
A Dangerous Disguise by Barbara Cartland
Wet (Elemental 1) by Rose Wulf
The Beachcomber by Josephine Cox
Out of Mind by Stella Cameron
Bad Vibrations: Book 1 of the Sedona Files by Christine Pope
Secrets of My Hollywood Life #5: Broadway Lights by Jen Calonita
No Use By Date For Love by Rachel Clark
The Sudden Departure of the Frasers by Louise Candlish
Lust for Life by Irving Stone