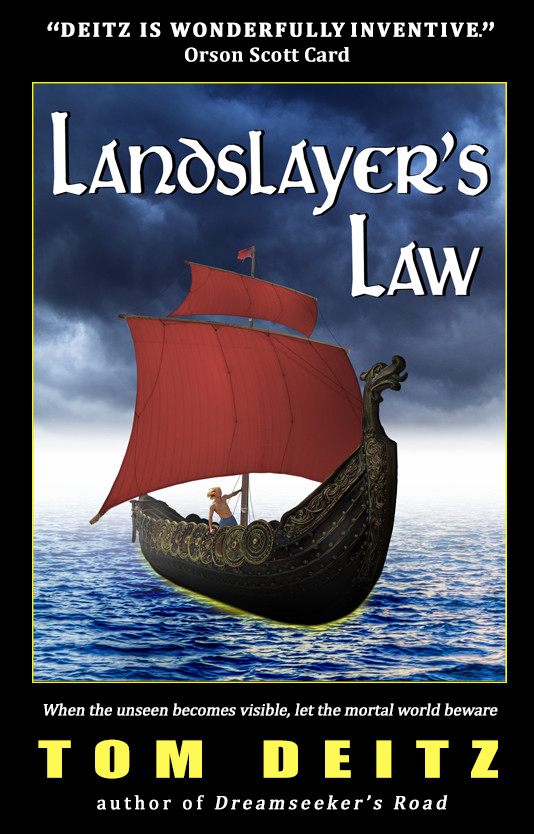 In memory of River

Prologue II: and Back Again

Interlude I: A Time Between

Chapter III: Out of the Night

Chapter XIV: All at Sea

Chapter XVIII: When the Ship Comes In

Copyright 2016 by Estate of Thomas Deitz

This ebook is licensed for your personal enjoyment only. No part of this book may be reproduced in any form or by any electronic or mechanical means, including information storage and retrieval systems, without written permission from the publisher or author, except in the case of a reviewer, who may quote brief passages embodied in critical articles or in a review. If you would like to share this book with another person, please purchase an additional copy for each person you share it with. If you’re reading this book and did not purchase it, or it was not purchased for your use only, then please return to your ebook retailer and purchase your own copy. Thank you for respecting the hard work of this author.

This is a work of fiction. The characters, dialogue and events in this book are wholly fictional, and any resemblance to companies and actual persons, living or dead, is coincidental.

In memory of River

And a special thanks

“Where does
that
’un
go?” Ralph Mims demanded from the passenger seat of Ben Carl’s black Grand Cherokee. He pointed ahead and to the left for emphasis—straight under Ben’s stubby nose, which irked the hell out of that feature’s rather more attenuated owner. Not for the first time did Carl wonder what he’d got himself into: agreeing to show this flatland resort developer around the wilds of Enotah County. Though technically a flatlander himself, he’d lived up here in the north Georgia mountains for over thirty years and sold real estate for twenty of ’em: more than long enough to know every pig trail, logging road, and mile-long gravel driveway in half a dozen counties.

He’d just not expected to play tour guide down all of ’em in three days. Shoot, the Cherokee showed more mud than paint now; he’d had one flat, chipped an expensive aluminum rim, and this dratted picky money-monger
still
hadn’t found a piece of property that suited him. Of course it’d help if Mr. Fat-ass’d explain what he actually wanted!

The finger hovered in place, though Ben had a strong urge to swat it halfway back to Athens, whence Mims had emerged like a grumpy rattler with the coming of spring. “Sullivan Cove,” he supplied instead—because he had to. “Private property—or Forest Service.”

“So was every other piece you’ve shown me the last two days. Why should this be any different?”

Ben ground his teeth and accelerated gently—pointedly—along the long straight that had uncoiled at the tail of the tortuous curves, grades, and switchbacks that marked the descent from Franks Gap and the White County border. Mountains rose to either side, lush with spring hardwoods spiced with evergreens: a frame of wilderness bracketing the cultivated river bottoms ahead and mostly to the right. “It’s different,” he sighed through his teeth (still not slowing), “because the Sullivans’ve been there two hundred years and haven’t sold an acre they haven’t been forced to. Shoot, the REA had to march the old man out with shotguns when they built the lake, and even then—”

“Lake?”
Mims removed the finger, but effectively replaced it with the rest of his stocky body, as though he would climb through the grimy windshield if he could. “Turn! Now!”

“Waste of time,” Ben countered, even as he complied. After all, he was charging by the hour—and charging a lot. Maybe he should think about overtime—or, given the Sullivans, hazard pay.
Please God, don’t let’s meet old Dale,
he prayed, with an audible sigh, as he swung the Cherokee hard left across a culvert and down a gravel road.

To the right, a low wooded ridge loomed close upon a few acres of freshly plowed farmland, facing an old, if much-augmented, clapboard house perched atop a bare hill an eighth-mile across the way, with the mountain they’d just descended lurking protectively above the splintery gray rampart of decrepit outbuildings behind it. A slim blond woman in jeans sat on the front porch drinking something from a glass that sparked in the sunlight; a newish Ford F150 and an oldish Crown Vic marked the terminus of a steep, rocky driveway just past the dwelling. “Sullivan number one,” Ben announced. “Bill and JoAnne. I’d mess with him ’fore I’d mess with her, but I wouldn’t recommend messin’ with either.”

“Technically. She works in a plant once in a while; he fools around with sorghum, and I think there’s family money.”

Mims (blessedly back in his seat) eyed the house speculatively—likely equating its patchwork shabbiness with lack of prosperity, which was a mistake in this case, and a big one. “Reckon they’d sell?” he queried, right on cue.

“Not for a million bucks.”

Ben started at that, which he reckoned a non sequitur, except that maybe Mims figured setting their kids up right might make a difference. He knew better. Still… “Two boys. Little ’un’s still at home—must be ’bout ten or eleven now; older ’un’s down at the University. ’Bout to graduate, I reckon. Smart kid, that ’un is: smartest boy in the county, I’d say—maybe the smartest person, period.”

Mims merely grunted. They passed a small church and graveyard to the right, a series of steep rolling pastures to the left. Matching arcs of woodland angled in further on, reducing the roadside fields to cramped strips no more than fifty yards wide, before opening out to the left on another farm even more run down than the first. An ancient, tin-roofed frame house stood there, abandoned behind a range of ragged cedars, looking for all the world as though some enormous constrictor had coiled about the structure and squeezed. A newer trailer further back and across the drive appeared well-kept and occupied. “Sullivan number two,” Ben observed. “Dale. Bill’s uncle.”

“Yep.” And by then they had entered the wilder land that marked the last half of Sullivan Cove Road. Mims had perked up, Ben noted sourly, as though he’d finally found something that interested him. Just his luck, too: for him to get the hots for the one chunk of real estate he’d never pry loose from its masters.

“Road dead-ends there,” Ben replied, grimacing as they crunched into an unexpected rut. “Old Sullivan place is underwater beyond.”

Ralph nodded smugly. Ben masked his irritation with a yawn. The land had opened up again, fallow fields alternating with patches of woods, alternating with serious forest. Ahead was a glitter that could only be water. Blue sky rose above: cloudless, save for a vague troubling in the air, like wind made manifest.

The road petered out in a turnaround ringed by the pale, worn-out stalks of last year’s broom sedge and pockmarked by the darker detritus of countless campfires. Without asking, Ben parked the Jeep and switched off the ignition. “Wanta get out?”

You would be,
Ben nearly blurted out, even as he schooled his expression to careful blandness. A pause to steel himself, and he joined Mims on the scraggly grass at the end of the road. Mims inhaled deeply. “Looks good!” he enthused, striding toward the fringe of pines that screened all but the merest shimmer of the lake. Ben followed doggedly. The larger man’s ample bulk blocked most of the view ahead.

“This is it,” Mims proclaimed, hands on hips. “Why didn’t you tell me about that mountain?”

“What mountain?” Ben wondered, easing up beside his client. But then he saw.

The land sloped down before him in a series of bare shelves, equal parts red clay and yellow rock until they disappeared beneath the glassy waters of a wide, mysterious-looking lake. But straight ahead—no more than half a mile offshore—a small mountain reared a near-perfect cone above the surface: a cone whose summit was faced with raw cliffs of some white stone—quartzite, probably—that glittered so brightly in the sunlight it hurt to look upon.

“Oh…right,” Ben choked. “I forgot about that.” Mims stared at him incredulously. “You
forgot
?
How could you forget something like that? Hell, it’s perfect! We’ll put a lodge on top, with a cable-car to it, and a marina here, and cabins, and—”

Ben wasn’t listening, absorbed as he was with pondering how he could possibly have failed to recall a view as spectacular as this. It wasn’t like he hadn’t seen it before, though not often since high school, it being a popular parking and skinny-dipping spot—if the Sullivans didn’t catch you. Yet the image he’d retained in his mind as he’d turned down the road had included the lake but not the mountain. Funny that was;
real
funny. And even odder now he thought of it, was the fact that this had happened before. More than once, in fact, he’d trundled down this very road, come to the lake, and been amazed to find a perfectly good mountain there. It was as if he forgot about the place as soon as he left it. Or, he realized with a shudder, as if the peak didn’t
want
to be remembered.

“Who owns this?” Mims bellowed, gesturing broadly to either hand.

“I’ll…have to check,” Ben managed, desperately glad to confront something comprehensible, however stressful, in lieu of what seemed to be tricks of the mind. “Doubt it’s the Sullivans, though. REA condemned it for the lake, so it’s either them or the state.”

“In either case, money talks,” Mims boomed. “Leave the state to me. You find out who holds the deed.”

“…and stay where you can hear me!” Jamie’s ma hollered from the open door of the run-down pink-and-white trailer that perched precariously on the steep hillside. Dark pines loomed behind it: the Pisgah National Forest. Jamie tried not to feel ashamed as he looked back. It was no fun being poor, no fun having a redneck daddy and a sometime whore for a mom (though he wasn’t supposed to know that word, or what it meant), no fun living in a place that looked like the woods had kicked it out like so much trash piled on its doorstep but not collected.