Ladle to the Grave (A Soup Lover's Mystery Book 4) 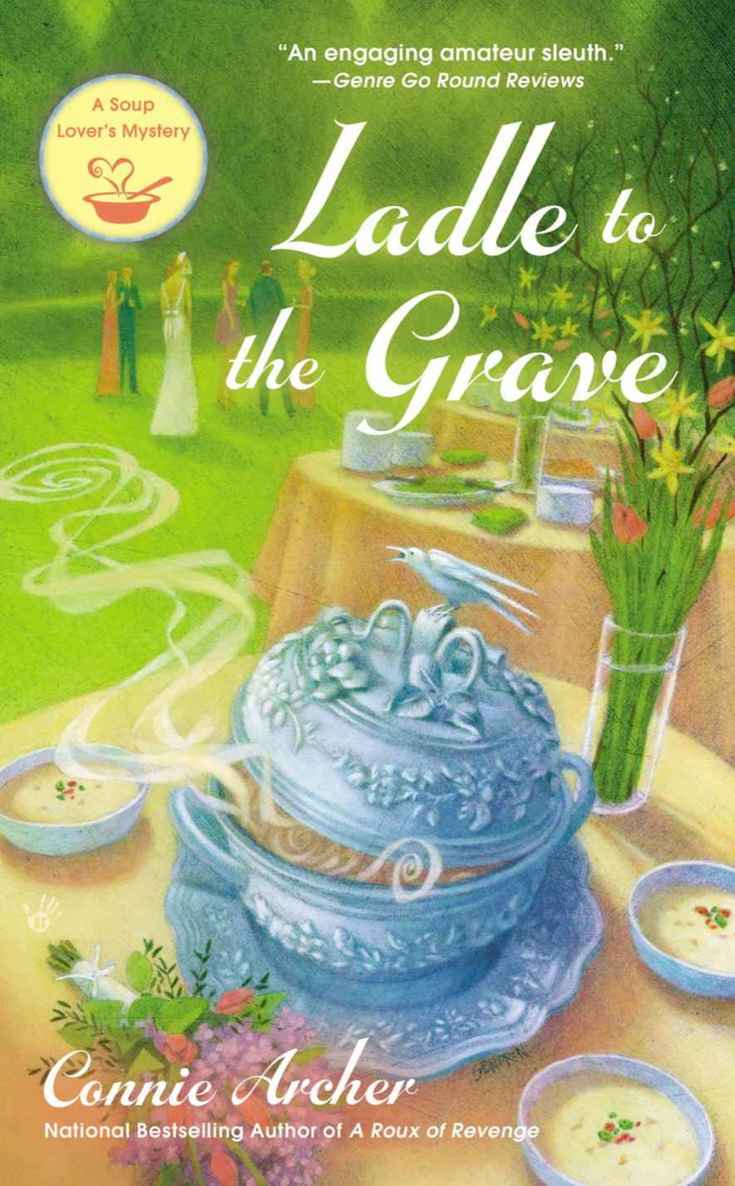 A Roux of Revenge

“A good read from beginning to end. The mystery kept me glued to the pages and the writing style had an easy flow that made it hard to put down . . . I can’t wait to see what happens next in this delightfully charming series.”

“This book is rich in stories about relationships . . . I highly recommend this series to anyone who loves culinary cozies!”

“A great series based on one of my favorite things: soup. Connie Archer gives readers a likable heroine and a great mystery in
A Roux of Revenge
that keep them guessing all the way to the end.”

A Broth of Betrayal

“Murder in the past, murder in the present, and an assortment of interesting characters in a small town, rife with secrets mixed together to serve up a soup du jour of mystery that cozy lovers are sure to enjoy.”

“An action-packed page-turner with memorable characters I look forward to revisiting again and again!”

“This book is full of wonderful mysteries, a skeleton discovered, a missing person, and a murder. The pages flew by. Archer has created such lively characters. Lucky is a strong protagonist who doesn’t mind finding herself ‘in the soup’ as she tries to save her friend or catch a killer.”

—Escape with Dollycas into a Good Book

A Spoonful of Murder

“Snow in Vermont, soup, and murder. What could be more cozy? . . . A charming new amateur-sleuth series.”

“An engaging amateur sleuth due to the troubled heroine and the delightful Vermont location.”

“A ‘souper’ idea for a cozy mystery series! . . . [Archer] has set a great foundation for this series. We have met the star and recurring characters and they have been left with plenty of room to grow. The setting is ideal.”

—Escape with Dollycas into a Good Book

“The way cozies should be written. A small town with lovable characters and a plot that leaves you satisfied at the end.”

—Girl Lost in a Book

A SPOONFUL OF MURD
ER

A BROTH OF BETRAY
AL

A ROUX OF REVENGE

LADLE TO THE GRAVE

LADLE TO THE GRAVE

A Berkley Prime Crime Book / published by arrangement with the author

For the girls—
You know who you are.

Many thanks to Paige Wheeler of Creative Media Agency, Inc., for her hard work, good advice and expertise, to my terrific editor, Faith Black, whose insights have made each book all the better, to Valle Hansen, thank you for catching all my errors, and to Danielle Dill for her enthusiasm and support of the Soup Lover’s Mysteries. Huge thanks go to everyone at Berkley Prime Crime who contributed their talent and energy in bringing this series to life.

Special thanks as well to the writers’ group—Cheryl Brughelli, Don Fedosiuk, Paula Freedman, R.B. Lodge and Marguerite Summers—for their criticism and encouragement. And a very special thank-you to Elise Varey who can take credit for inventing a last name for Meg! Meg thanks you and she is thrilled to know she’ll be playing a much larger role from now on.

Last, but certainly not least, thanks to my family and my wonderful husband for their tolerance in living with a woman who is constantly thinking about ways to kill people.

Praise for Titles by Connie Archer

T
HE WOMEN MOVED
slowly, shuffling into the clearing in the woods, careful not to trip on the long white robes they had been instructed to wear. A few stole surreptitious glances at one or another of their group as they formed a loose semicircle before the slab of stone in the clearing. A chill wind blew through the trees, and the sound of beating wings came from above.

Cordelia Rank took her place at the designated altar. Behind her, a brazier flamed on the ancient rock. She surveyed the gathering critically. “Sisters, please! You
can
do better. Form a
semicircle
!” she ordered, indicating her wishes with a sweep of her arm. Each woman glanced to her left and right and, stepping carefully over the pine needles and damp earth, shifted position to form a more uniform shape.

Cecily Winters took a deep breath, wondering, not for the first time, whether joining the Snowflake Coven was such a good idea. Her sister, Marjorie, certainly hadn’t been happy about it. It had sounded just so wonderful when she had first heard of the plan. Beltane Eve, April 30, a night to celebrate the coming of spring and the first buds of May with a bonfire, feasting, candlelight and song. Their small iron container would have to do. A bonfire in the woods at midnight could be dangerous. Cecily shuddered involuntarily. The crackling flames formed eerie shadows in the night, flickering against the tree trunks.
If only Cordelia hadn’t appointed herself high priestess
, she thought,
insufferable woman, it might have been fun
.

At a nod from Cordelia, one of the group, holding a candle cupped in her hand, moved within the inner circumference of their small circle and lit the candles clutched in the hands of the other women. When all the candles were lit, Cordelia nodded.

“Now we begin,” she announced. She turned back to the stone altar and, raising her arms, spoke in ringing tones. “Mother Earth, we have gathered together here, in this wood, to honor you, to celebrate the light of coming spring. Beltane is a time for love and the union of souls, the union of minds and the union of bodies.”

Cecily looked up quickly. This was the first she had heard of the union of bodies. She glanced around the circle to see whether anyone else had noticed the phrase.

“We have been called to replenish the earth,” Cordelia continued. “Our fire and our candles will light the sacred union of fertility, as our pagan ancestors have done for centuries. We will assist in bringing the sun’s light to earth, so that the earth may awaken from its long winter sleep. Our bodies, our minds and our spirits will alight with joy. We are ready to cast away all the doubts and fears of the winter. Our dream will be of hope and harmony.”

Cecily’s nose was itching. The band of flowers in the headdress she wore was slipping down over her forehead. She needed to scratch, but holding the candle and her too-long robe together, she had no free hand. She moved her shoulder up and turned her head, rubbing her nose on her arm. Cordelia glared at her from the stone altar. Cecily dropped her arm but before she could stifle it, she erupted with a thunderous sneeze.

Cordelia sighed her disappointment. Addressing the women, she said, “We now dedicate our herbs to the glory of Mother Earth. Each of us shall drink of our May wine.” She turned to the woman on her left. “You, Sister, shall be the first to drink of our draught tonight.” Cordelia filled a shallow bowl from a cauldron that sat next to the fire. “With these herbs of sweet woodruff, strawberry and honey, you shall partake.”

A strangled sound came from the lips of the first woman to drink. She gasped, clutching her throat. Her eyes grew large in panic as she tried to speak. Her chest heaved with the effort to breathe. She dropped to the ground as her legs crumpled beneath her. The others watched helplessly as the woman lay before them, retching and gasping for air.

Someone replied in alarm. “She can’t breathe. Help her!”

“Let me through. I know CPR.” Emily Rathbone pushed the women aside. They stepped back and stared as Agnes continued to gasp. Emily struggled to lift Agnes’s head and open her jaw while Agnes writhed violently.

“Help me hold her,” Emily shouted. Two of the women knelt. One held Agnes’s arms and the other, her legs. Emily tilted Agnes’s head and checked her throat. “There’s nothing there. Nothing’s interfering with her breathing. Maybe it’s an allergic reaction.” She deftly rolled Agnes to her side. Agnes’s head fell forward, her movements still violent. She retched again and whispered, “Help me.” Then her body went limp.

Complete stillness filled the clearing. No one spoke. Someone finally whispered, “Is she breathing?”

Emily felt for a pulse while the women watched in silence. She looked up at their concerned faces. “Agnes is gone.”