Knights of the Wizard (of Knights and Wizards Book 2) 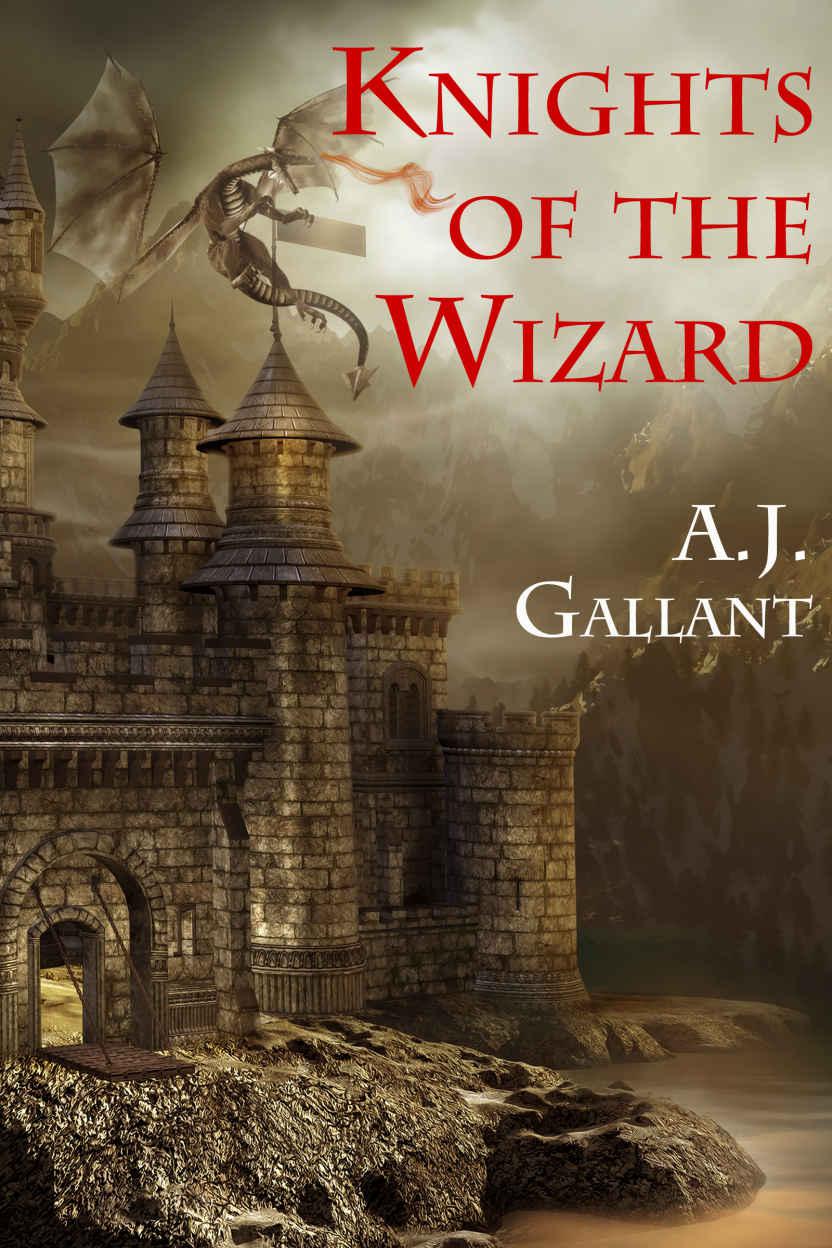 Novels by A. J. Gallant

Madman in the Mirror
(A child is raised by a serial killer.)

Destiny
(An assassin’s paranormal story of love and hate.)

The Nature of Winter (photo book)
(Scenes of Winter)

“Of Knights and Wizards”

KNIGHTS OF THE WIZARD

No part of this novel may be reproduced, scanned or distributed in any printed or electronic form without permission. Purchase only authorized editions. This book is a work of fiction. Characters, names, incidents and places are either the products of the author’s imagination or are used fictitiously.

The first novel of this series is Knights of the Dragon.
http://www.amazon.com/Knights-Dragon-A-J-Gallant-ebook/dp/B00BIRAI5Q/ref=sr_1_1?s=digital-text&ie=UTF8&qid=1382447111&sr=1-1&keywords=knights+of+the+dragon

(Knights of the Wizard are the continuing stories originating from Knights of the Dragon. Marcus is working hard at becoming a first class wizard but he definitely has a lot to learn, and even Adorok’s spirit is becoming frustrated at his progress. Ash is an exceptional baby dragon that dreams about an evil grey dragon that will come out of the bowels of the earth that will be a danger to everyone.)

“The noir hero is a knight in blood caked armor. He’s dirty and he does his best to deny the fact that he’s a hero the whole time.”

“
The battle begins before the enemy is at the gates, before the sword has been drawn; the knight having to vanquish his fear before facing the enemy.”

A preview of Moon Diamond follows Knights of the Wizard.

Zacharia, an ancient friend of Dracula’s, had an old Siamese cat named Moon Diamond who he loved dearly and kept animated with a piece of his soul. When Zacharia was killed something extraordinary happened, instead of his soul moving on to the land of the dead it went inside the cat and his spirit now shares control of the feline.

The author would greatly appreciate you visiting his author page.

THE EXPLOSION THREW MARCUS across the chamber and against the castle wall as if he’d been kicked by a horse. The impact loud and devastating, skin and bone against rock, breaking both the back of his skull and a bone in his neck and would have killed him had he not a natural protection against his own magic. The 13-year-old wizard had braced himself for a possible explosion, but it hadn’t done him any good, having been thrown with such force that it had been terrifying. His seemingly lifeless body remained on the floor for a time, but then his right leg twitched, returning him to consciousness.

Face down on the floor he pushed himself onto his knees and then got up, feeling dizzy and knowing that something wasn’t right, in fact, something was terribly wrong. His neck was bent at an awkward angle, couldn’t hold it up because it was broken. But then the magic kicked in and he was instantly healed, his head snapped back into its proper position with a crunch. The most unpleasant sound the boy had ever heard but quite necessary. The stench of sulphur and the ground up rafflesia flower, which smelled a lot like rotting flesh, assaulted his nose, like being in a fetid dungeon.

Adorok had made most of his enchantments look so easy, a little bit of this, a pinch of that and voila a successful spell, but for the young sorcerer nothing was simple. Marcus shuffled back and forth several times, the way Adorok used to pace when he was working on a spell that was giving him trouble, remembering the old wizard as he did so. He went over the spell in his mind, his cute face showing consternation wondering what exactly had gone wrong. He kicked the leg of the table in anger, bruising his big toe and then jumping around from the pain. “Why can’t I cast a proper spell? It’s maddening!”

Marcus limped over to the window, pushed the hide aside and stared down at Stone teaching a prospective knight how to fight, four of them were out there for instruction as about a dozen others watched. It was great entertainment to observe Stone in action, his muscular arms wielding his sword as if it was part of him, his bare chest nicely defined. His ease of movement with such a heavy sword was impressive, his anticipation of their movements were excellent. His father had given him a wooden sword when he was two and had received a crack in the head from it.

“If only I could be a knight like Stone instead of a stupid wizard.” His stupid sister was a knight for god sake. It was fun to watch Stone, but it didn’t get anything accomplished while doing so; staring down at the adept knight from the high castle window imagining it was him down there. He knew that there could be a point in time where the defense of Leeander could be solely on his shoulders, now that was a scary thought. In fact in was a regular nightmare of his.

From what Marcus could see two of them definitely had some talent with a sword, especially the 14-year-old blond fellow named Cyrus though of course no match for Stone. But the other two were awkward and wouldn’t even be a challenge for a goat with a stick. The knight looked up at Marcus and acknowledged him with a nod, showing the boy a smile that said he knew another spell had failed; of course he had heard the explosion. Marcus believed that fate was leading him down the wrong path, especially with his lack of talent for being a wizard. The only thing he could accomplish was to conjure up an eagle, no shortage of eagles while he was around. The very first eagle had been exciting.

“Some stupid wizard I am.” He sighed as he left the window, sitting on what had been Adorok’s chair. He missed Adorok now that he had passed from the land of the living, his brief conversations with his ghost just weren't the same. Marcus went through the small book from which he had cast the spell, going over the enchantment, several words were incomprehensible, he had guessed at them but had apparently gotten at least one of them wrong. But even the enchantments that he was sure he had gotten everything right didn’t work. There were lots of knights to teach others how to be a knight but no wizards around to help him, and stumbling with magic was both difficult and dangerous. His lack of success made him feel hopelessly inept, his confidence pounded down like a blacksmith hammering steel, and each unsuccessful enchantment making him feel that it was hopeless.

A large rat ran across the floor heading for a hole in the far wall and when it paused he pointed at it angrily, a bolt of lightning exited from the end of his index finger striking it. The rat never knew what hit it, exploding with a pop, guts and fur flew everywhere, its tail hitting the boy, sticking momentarily to his forehead; he had not expected that, adding more distasteful odors to the chamber. Marcus would have to get someone to clean up the mess before it commenced to rot. He shook his head repeatedly, had felt the charge leaving his body but what if he had been pointing at a loved one, imagining his sister exploding with her guts all over the place. He pointed at the wall trying to produce another bolt but nothing happened. What was the stupid purpose of haphazard magic? He wouldn’t be any use to anyone, including himself.

Marcus’s sister Alexa entered the chamber with a tin cup, handing the cup to her brother. She was beautiful, perhaps the prettiest in the entire kingdom but to Marcus she was simply a pest. “What the hell is that stink? Here taste this and tell me if it’s sweet enough.” Why Stone had married her was beyond him, although the baby was cute enough and the baby’s laugh made him laugh, although it would have been better had Abbey been a boy.

The sorcerer took a drink and quickly spit it out because it was pure lemon juice, his mouth watered from the sour taste as Alexa laughed, immediately turning and leaving, giggling as she went. “That is not the least bit funny!”

Marcus shook his head and tiny magical particles flew all over the room, never happened before, and the large oak table where he did his work started to float, hovering about a foot off the stone floor. “Now what?” He approached the table and pushed it down, but as soon as he released it up it went again, floating away as he pushed it, bumping lightly into the wall. “That’s just great!”

He went over to the table, picking up the chicken leg that he had been eating earlier, flicking the dust off and finished it, throwing the bone out the window even though his father the king chastised him for doing it. Marcus pulled out the drawer and removed another of Adorok’s old books that was supposed to contain the most basic spells and went through it, getting desperate to have something work. He had even considered that being a boy and having smaller hands than Adorok, that when a spell called for a pinch he might have to add two instead of one but even that didn’t work. His father’s raven flew in through the window and onto the table, bringing with it another branch, the fourth one this week. The bird cocked its head at the floating table and then flew out the door and down the hall. Adorok had said that there should never be a door to this chamber so that excess magic could escape.

Marcus took the branch and threw it out the window. “I am not building you a nest you stupid bird.”

The boy soon discovered a fire spell in the book, two basic ingredients placed between two fingers and then snapped, sulphur and something called snapper dust. He’d never heard of it but after searching the shelves found a container that was almost half full of it. If this simple spell didn’t work perhaps he should just give up. He removed the bottle from the shelf and shook the ingredients, orange snapper dust was clearly marked on the label; pulling out the cork he smelled it, a flowery scent. He realized that it probably wasn’t a good idea to shake magical ingredients. Marcus got the sulphur and then mixed them together and placed them between a finger and his thumb and then snapped.

Marcus’s hair caught on fire, screaming louder than he had ever screamed and jumping around wildly.