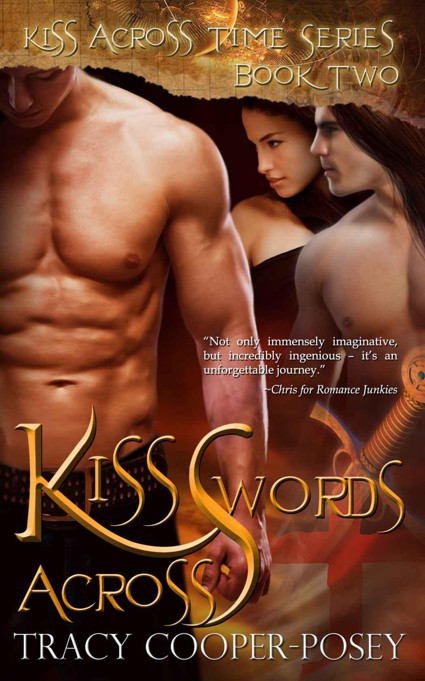 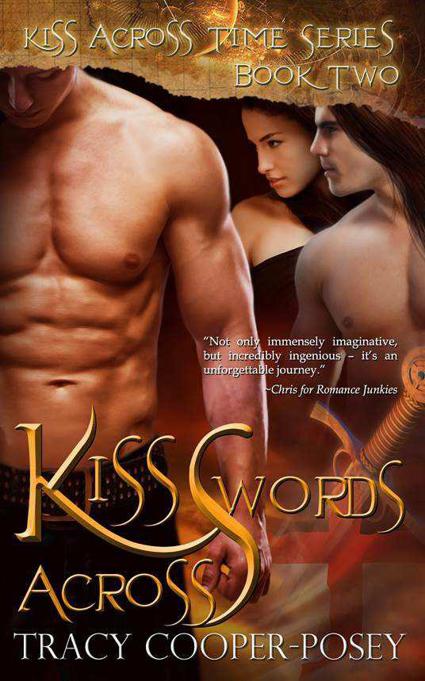 To save them all they must win back one reluctant heart…again.

Taylor Yates never dreamed growing up she would end up happily living with two drop-dead sexy vampires and time-hopping through their thousand years of personal history. Her life is complete…or is it?

When she finds herself at the siege of Jerusalem during the first crusade, Veris doesn’t know her at all and doesn’t want to. Worst of all, he and Brody are total strangers, and Taylor drives a wedge in deep between them by trying to seduce Veris at their first meeting—
not
something a lady of the day does if she wants to keep her head.

Taylor and Brody must woo Veris using the customs of medieval England, win his heart and his full commitment
before Jerusalem falls in four days’ time—or when they return to their own time, their lives as they know them will be gone…

Praise for
Kiss Across Swords

This is a story, and these are characters, that stay with the reader long after the story is finished.
Kiss Across Swords
speaks to the very heart of what it means to love somebody. I have to give a hearty thanks for this unforgettable tale.
Clare for
Happily Ever After Reviews

Not only immensely imaginative, but incredibly ingenious – it’s an unforgettable journey.
Chris for
Romance Junkies Reviews

Kiss Across Swords
is a wonderfully imaginative story that will grab readers from the first page and hold them transfixed. Her ability to create a story that captures readers and characters with depth will keep me coming back for more.
Claudia for
A Romance Review

She shows the reader how beautiful and seductive two men can be when they unleash their desires for each other. It’s a romance that has a number of elements, all combined to make a very captivating story. I’m looking forward to reading more in this imaginative series.
Leslie for
Leslie’s Psyche

A thrilling exploration of battle, self-loathing, trust, and a soul-shaking love that time cannot erase.
Rhonda for
Vampire Romance Books

To Mark, for putting up with this compulsive obsession of mine.
This one, once more, is for you. You’ll see why.

Brody carefully returned his long glass of untouched champagne to the table by his side and slid cautiously around so he was diagonal to Veris and Taylor as they confronted each other. Brody’s heart was actually thudding, reacting to the tension in the room all by itself, something it hadn’t done in years.

Taylor’s smile faltered. “I thought you would be pleased,” she told Veris. “It’s what your queen wants. You implied to her it would happen in the next ten years, anyway.” She stood straight and tall, not backing down even though she could probably see Veris’ reaction wasn’t the one she had been expecting.

God, she was so gutsy
. Brody admired her even as he wondered how he could stop this disaster from happening: her black hair with the unexpected copper highlights, the smoky gray eyes, the gorgeous long legs. She was damn sexy and she had just asked Veris to provide the means to bind her life to him forever and irrevocably. They were words any man with half a brain would turn cartwheels over.

“You want me to turn you for your birthday. To make you a vampire.” Veris put his champagne down and wasn’t nearly as careful with the crystal. It made a grating noise on the glass side table. He moved his shoulders inside the jacket he’d put on for their private birthday party.

Brody wished now the big, book-lined room was full of guests, for then Taylor would never have asked her question and Veris would not do what he was about to do. Instead it was simply him, Veris and Taylor standing at the south end of the room near the big, unlit fireplace. The last of the late sunset was streaming through colored lead lights in the front foyer across the twin openings on either side of the fireplace, filling the room with unearthly light.

Taylor wore a simple white sleeveless dress that stopped more than a few inches short of her knees. It probably cost a small fortune despite the lack of material in it. Her flesh glowed with health and vitality and her dress rippled with color each time she moved, from the light spilling into the room. Her legs were just wonderful. Brody never tired of watching them move.

He already knew one reason for Veris’ ill-ease. Perhaps he’d just caught a hint of one other. Taylor was ripe with living.

Brody gripped Veris’ forearm. “Don’t,” he said softly as his lover seemed to brace himself to answer Taylor.

Veris took a breath and Brody could hear the air shudder as it drew in. He yanked his arm out of Brody’s grip. His blue eyes came to bear upon him and Brody almost winced at the pain there. “I won’t, then,” he said, his voice very soft. “Not tonight, as you asked and its Taylor’s birthday. But this…” He shook his head. “I will not do it.”

“You won’t turn me,” Taylor concluded. “Despite your promise to the queen.”

Veris closed his eyes briefly. “That was four years ago. I expected, when the time came, that Brody would do the deed.”

Veris sighed and looked at Taylor. “I cannot. I will not. And do not ask Brody to do it instead of me, Taylor.”

Her lips parted, but that was all the surprise she showed.

Brody hid his shock. He’d had far longer to get used to Veris’ occasional outbursts of authoritarianism, a holdover from other ages.

Taylor slammed her glass down. “Like hell!” she said, her voice strident. “You won’t, but no one else can either? What the fuck is that supposed to mean?
Stay away from my bone
?” She planted her hands on her hips and her knuckles whitened.

Yep, Taylor was angry now. The one thing guaranteed to switch on her fury for a good long storm was any overt attempt to tell her what to do. Veris was a master at it. He was also expert at dismantling her anger with calm, clear logic. Taylor was anything but a hypocrite and once she saw the truth, her fury fled like storm clouds and her sunny temper returned.

But Veris simply looked at Brody, his eyes haunted. “I promised I wouldn’t open this Pandora’s box tonight. You’ll have to explain the rest to her.” He left the room and Brody saw his shadow cross the wall of the foyer as he started to climb the wrought iron-lined stairs to the second floor. Veris was removing himself from the argument before it even began.

Taylor stared at the doorway Veris had used. “He’s never done that before.” She sounded almost breathless. “He’s never walked away from an argument before. Not just because you asked him to.”

“You’ve never pushed him so hard before, either,” Brody said simply.

“
Pushed
?” She spun to face him. “How on earth is asking to be turned pushing him? I don’t get it!” The distress in her voice was genuine, overriding any anger left in her.

Brody picked up her glass and held it out to her. “It’s still your birthday. Drink. I’ll try to explain as Veris wanted me to, but I’ll be guessing most of it.”

“You know him so well, your guesses might as well be sworn statements,” Taylor muttered. She tipped a heavy slug of the champagne back into her mouth with a little convulsive jerk.

Brody frowned. “
That
sounded less than happy, too.”

She shrugged and glanced away.

“You want to have an argument with me, now that Veris has gone?”

Taylor grimaced. “No,” she said and sighed.

“Then…” He frowned, as meanings shifted and became clearer. “Is that why you want Veris to turn you and not me?”

She glanced up at him, her lashes just barely lifting to reveal the dark gray of her eyes. “Does it matter?”

The corners of her mouth lifted just a fraction.

“You’re trying to find a way to tie him to you,” Brody told her. “For humans it’s marriage. For our kind the bond we have has no ceremony but is far more permanent. But lifetime permanency isn’t enough for you. You want the bond that comes from maker and child, as well.”

Stealing Jake by Pam Hillman
A Night at the Wesley by Vallory Vance
Enemy Red by Harte, Marie
Demon Wind by Kay wilde
Thicker than Water by Rett MacPherson
Three and a Half Weeks by Lulu Astor
Spooning Daisy by Maggie McConnell
Keepsake by Linda Barlow
Horten's Miraculous Mechanisms by Lissa Evans
Some Quiet Place by Kelsey Sutton