Kent Conwell - Tony Boudreaux 14 - Murder in a Casbah of Cats 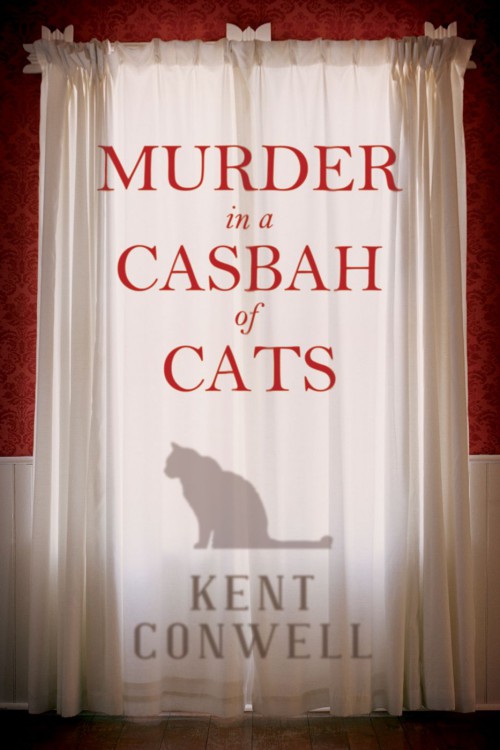 It should've been an easy job for a private investigator—house-sit some cats for a couple weeks and rake in a few thousand bucks thanks to their eccentric owner's bottomless bank account—practically a vacation.
At least, that's what Tony Boudreaux figures until he finds himself trying to herd a veritable horde of cats, navigate a sprawling mansion with hidden tunnels, and deal with an eccentric staff who all harbor their own secrets. And that's before the murder!
After witnessing a homicide on his first night on the job, Tony soon finds himself fending off attempts on his own life, unraveling a massive drug-dealing ring, and dealing with the not-entirely-unwanted attentions of a spoiled heiress—all while keeping the mansion's many feline inhabitants alive and well.
Now Tony must dig up clues on a 15-year-old murder mystery and determine what it has to do with the recent death. And the cats themselves may be his only chance of getting out of this deadly predicament alive.

Text copyright © 2012 Kent Conwell
All rights reserved.
No part of this book may be reproduced, or stored in a retrieval system, or transmitted in any form or by any means, electronic, mechanical, photocopying, recording, or otherwise, without express written permission of the publisher.

To Avalon Books—thanks for the great ride. I’ll never forget it.

And to my wife, Gayle. Thanks for always being there.

Everyone has heard of Murphy’s Law, the barbed little observation regarding the perversity of the universe. The observation is true more often than not, as in the school law that says, “You never catch on until after the test,” or the astute law of photography, “Auto focus—won’t.”

I’ve never figured out just who this Murphy guy is, but the way I careen down the twisting tunnel of life, I’d lay odds he’s hiding somewhere, recording the bizarre events in my life and subsequently fashioning his observations from them.

That’s the only explanation I have for the cat caper, mockingly referred to by some of my more mentally challenged friends as “Murder in a Casbah of Cats.” Those were the unforgettable days I spent babysitting twenty felines, only to find myself surrounded by bodies—dead ones—and not cats. My ensuing investigation was probably the worst job I’d ever done in my life. Looking back, all I can figure is…Well, I’m getting ahead of myself and probably confusing you.

A couple of months back, I hauled Jack and Diane Edney out of a jam at their new home on Ghost Bayou, near Priouxville on the
Bayou Teche Scenic Highway. To show their appreciation, they invited me to pay them another visit, a leisurely one this time.

I wasted no time declining. I’d had my fill of alligators, swamps, shrimpers spoiling for a fight, and dark nights down on the bayou serenaded by crickets and stalked by cottonmouths.

Though born and raised on the Louisiana prairies around Church Point, back northwest of Lafayette, the last twenty-odd years in Austin, Texas, had spoiled me to the creature comforts of the city.

One thing I got out of my harrowing time in Priouxville was a new Chevrolet Silverado pickup. Jack bought it for me out of the reward money for recovering the diamonds stolen from the Eloi Saint Julian Jewelers in New Orleans back in ’96.

My 2002 Chevy Silverado pickup had been dumped into the bayou when the sheriff and his dim-witted sidekick tried to feed me to the alligators.

After that swamp gig, I was worn to the proverbial nub, so my first day back at work I gave my boss, Marty Blevins of Blevins Security, a choice. Keep me in Austin or take my two weeks’ notice.

Now, Marty is an accommodating guy—greedy, manipulative, devious, sneaky, but accommodating—and he promptly turned a new client over to me by the name of Skylar J. Watkins, a fifty-odd-year-old eccentric with money to burn.

I lifted a skeptical eyebrow. “Doing what?”

Despite the air-conditioning in the office, a sheen of perspiration glistened on his fat forehead as he deftly skirted my question.
“You’ll be staying in Austin. It’s a little different than what you’re used to. Give you a chance to rest up.”

I grew suspicious. He was being too accommodating.

“I thought of you because of your cat—what’s its name, YZ or something?”

“AB.” I had saved the cat from being used as alligator bait. That’s how the little feline got his name.

I replied. “What does AB have to do with anything? The cat’s been gone a couple of months now. Went off tomcatting and never came back.”

Then he dropped the bombshell. “You’ll be house-sitting a cat.”

Nodding emphatically, Marty continued. “Watkins hired us to watch her cats for the next two weeks while she and her niece take a cruise.” I shook my head, caught up in a state of shocked disbelief. Before I could say a word, he continued. “She lives in an old mansion out in the Old West Austin Historic District. You know it, all those fancy old houses.”

I frowned. “Yeah. I know the area, but…Watkins? That name seems familiar.”

Marty grunted. “The old man was a big humanitarian in Austin. Always giving money away. About fifteen years ago, someone whacked him. Never found the killer. The wife died a couple of years later.”

“I remember. I forget the guy’s name—you know, the one the cops suspected. He had an alibi. Even passed a polygraph, I heard, but the cops still figure he’s a person of interest.”

“Yeah.” Marty hastened to continue. “You know cats. You’re the natural one for the job.”

I shook my head. “Nope. I’m not babysitting a cat for the next two weeks.”

A sly grin curled his lips. “She’s paying fifty an hour, twenty-four seven. That’s sixteen-eight, and you get twenty-five percent.” He pressed his lips together and gave me one of those “are you crazy” looks.

All I could do was gape at him.

He chuckled. “I told you she was eccentric—and rich. Boy, is she rich. Of course, she has servants out there. You won’t have to do a thing, just make sure the cat is all right. The servants will take care of everything.”

“Then why does she need us?”

“I told you she was eccentric. Obviously, she doesn’t trust her servants.” His smile grew patronizing. “She has a cook, a maid, and a butler. Look, it’ll be like a vacation. Two weeks, waited on hand and foot. All you have to do is watch the cat. It’s a house cat.” He shook his head. “Just think, no long nights tagging after a mark. No sleazing about in the bars down on Sixth Street.”

I didn’t say it, but sleazing about the bars down on Sixth Street was one of my favorite pastimes. “How’d she come to pick us?”

“She’s a second cousin to Chief Ramon Pachuca down at the Austin Police Department. When he called me, he said he’d appreciate any help we could give her.” He paused. “He said she was kinda odd. That’s why he suggested you for the job.”

Marty always knew how to close a sale. And he just closed this one with Pachuca’s help. “Not much of a choice, huh?”

He laughed. “You’ll like it. Especially when you figure what your bonus will be over four grand for two weeks’ work.”

I didn’t laugh. “In addition to my salary, right?” He’d pulled the bonus scam on me before—the old bonus-instead-of-salary switch.

Marty fidgeted in his chair a few seconds. “Yeah, yeah, if you insist.”

I smiled wickedly. I’d finally beaten him at his own game. “I insist.”

Had I known then what I learned later, I would have probably cried.

He hooked a fat thumb at the door. “I told her I’d have you pay her a visit so she could go over what she expects.”

Out in the parking lot, I sat in my pickup with the cool air gushing from the vents. The truck still had that new-car smell.

I pondered my assignment. Two weeks looking after a cat wasn’t a bad job. I could get caught up on my reading, watch all of the old movies I wanted. Yep, I told myself, as I shifted into gear and pulled onto Lamar. It might not be such a bad deal after all. A change of pace from dodging cottonmouths and fighting off alligators.

The Watkins mansion reminded me of the old Pease mansion there in Austin. Both were Greek Revival, with stately columns in front of the three-story structure. Either of them would have made a more than adequate substitute for Tara.

An eight-foot wrought-iron fence between redbrick columns ten feet high and four feet wide surrounded the imposing mansion. Inset in the front and back of each column was a cast-iron oval almost six feet high with an image of the mansion in relief.

I guessed the fence enclosed about ten acres and more ancient live oaks than I could count. I whistled softly, trying to imagine what city and county taxes cost the eccentric old woman. “Hey,” I muttered, “if she can afford over sixteen grand to look after a cat, she can handle any kind of tax bill.”

Tall hedges extended from the east end of the stately house, and a diving board rose above them. As I made my way along a curving drive bordered by a brilliant array of multicolored flowers, I spotted a brick garage behind the mansion with four out of the five gleaming white bay doors closed. Beyond the garage, a small green tractor pulled a gang of reel mowers over the lush St. Augustine grass.

Little Square of Cloth by Sean Michael
Collector's Item by Golinowski, Denise
A Collateral Attraction by Liz Madrid
The Ghost Of Love by Marlene Johnsen
Savages of Gor by John Norman
Transgression by James W. Nichol
Pies and Potions by Pressey, Rose
The Bachelor and the Beauty Queen by Carolyn Hector
Promise Me Eternity by Ian Fox
Darkness Comes by A.C. Warneke