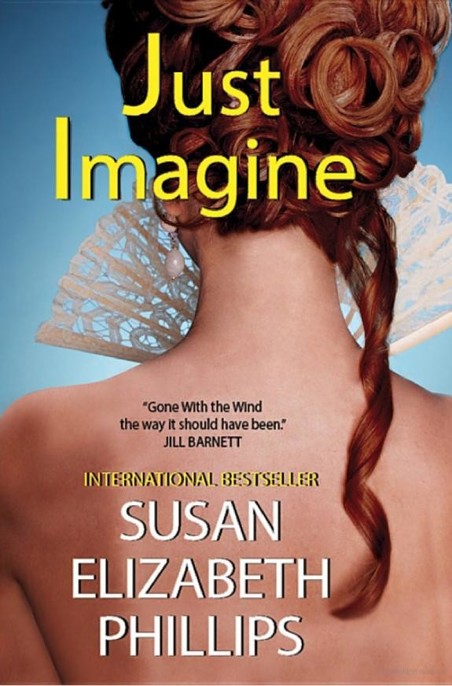 Over the years I've received hundreds of letters asking about my historical romance
Risen Glory
. This book was my first solo effort, originally published in 1984, and has been out of print for many years. You've complained and whined—yes, I've definitely heard whining!—because you wanted to read it. Well,
stop if right now! Risen Glory
is back in this newly revised and retitled edition.
Just Imagine
.

Like many of you, I was first introduced to the wonderful world of romantic fiction through the swashbuckling historical romances of the late 1970s and early 1980s. Those passionate, sexy, and woefully politically incorrect tales of brooding heroes and feisty heroines enchanted me. They took me to a world where all the odds were tilted in favor of men, and the only rights a woman had were the ones she fought for. Yet the woman always won! If only real life were like that.

Revising this book has been nostalgic for me. When I first wrote it, I was a young mother trying to squeeze in a few hours at my portable typewriter between nursery school carpools. My writing has changed over the years, and my current books are different from this one. Yet I found so many similarities. From the very beginning I loved powerful characters, strong emotions, humor, and lots of sizzle!

So come back with me to an earlier time… a time when men were men, and women were put on earth to give them trouble!

P.S. For more about
Just Imagine
, visit my Web site at
www. susanephillips.com

It Had to Be You

Nobody's Baby But Mine

This Heart of Mine

This is a work of fiction. Names, characters, places, and incidents are products of the author's imagination or are used fictitiously and are not to be construed as real. Any resemblance to actual events, locales, organizations, or persons, living or dead, is entirely coincidental.

An Imprint of
HarperCollins
Publishers

Printed in the U.S.A.

To my husband Bill,

with love and appreciation

The old street vendor noticed him at once, for the boy was out of place in the crowd of well-dressed stockbrokers and bankers who thronged the streets of lower Manhattan. Cropped black hair that might have held a hint of curl had it been clean stuck out in spikes from beneath the brim of a battered felt hat. A patched shirt unbuttoned at the neck, perhaps in deference to the early July heat, covered narrow, fragile shoulders, while a strap of leather harness held up a pair of greasy, oversized britches. The boy wore black boots that seemed too big for one so small, and he held an oblong bundle in the crook of his arm.

The street vendor leaned against a pushcart filled with trays of pastries and watched the boy shove his way through the crowd, as if it were an enemy to be conquered. The old man saw things others missed, and something about the boy caught his imagination.

"You there,
ragazzo
. I got a pastry for you. Light as the kiss of an angel.
Vieni qui
."

The lad jerked up his head, then gazed longingly at the trays of confections the old man's wife made fresh each day The peddler could almost hear him counting the pennies concealed in the bundle he clutched so protectively "Come,
ragazzo
. It is my gift to you." He held up a fat apple tart. "The gift of an old man to a new arrival in this, the most important city in the world."

Snowed In by Sarah Title
Mistletoe Murder by Leslie Meier
Jacaranda by Cherie Priest
I Conjure Thee by Elixa Everett
Beautiful Intelligence by Stephen Palmer
The Fighter (The High Rise, Book 1) by Harper Bentley
The Death Of Joan Of Arc by Michael Scott
Trial By Fire by Coyle, Harold
Wedded for His Royal Duty by Susan Meier
It's Alive by S.L. Carpenter