Just for the Summer (Chasing Carolina #0.5) 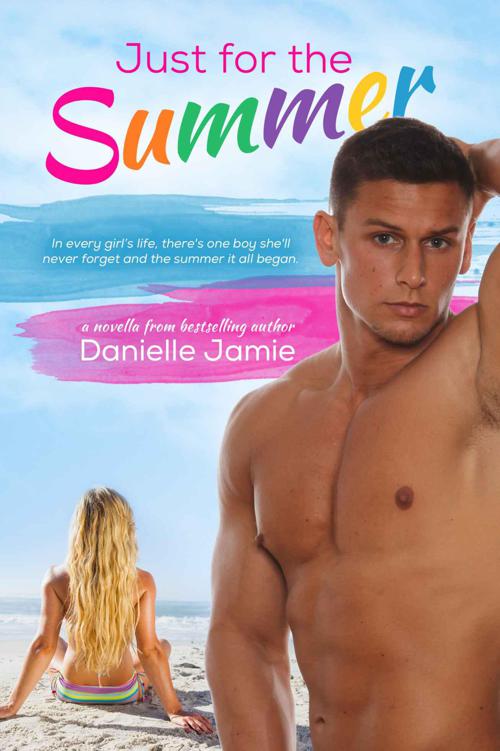 This e-book is licensed for your personal enjoyment only. This e-book may not be sold or given away to other people. If you would like to share this book with another person, please purchase an additional copy for each recipient. If you are reading this book and you did not purchase it, or it was not purchased for your use only, then please return it Smashwords.com and purchase your own copy. Thank you for supporting and respecting the hard work of this author.

This book is a work of fiction. Names, characters, places and incidents are the product of the author’s imagination or are used fictitiously. Any resemblance to actual persons, living or dead, business establishments, events or locales, is entirely coincidental.

The characters, places, situations and events of this story are developed materializations of my imagination and, therefore, belong entirely to me. Distribution of this story is only permitted with my written consent, and any use of the aforementioned factors must be approved of also. Please do not steal; I shouldn’t be punished for your lack of originality and dedication.

I don’t own any of the name brands i.e. Nike, Victoria Secret, etc. that might appear in the story.

Just For The Summer

Just For The Summer is a work of fiction. Names, places, and incidents either are products of the author’s imagination or are used fictitiously.

Published in the United States by Danielle Jamie, Mineville NY

Edited By: Kayla Robichaux AKA Kayla the Bibliophile

In every girls life; there’s a boy she’ll never forget

and a summer where it all began.

“HURRY YOUR BUTTS UP!
I want to get down to the beach,” Tamara, one of my sorority sisters, yells before slamming the passenger side door. She stomps up the wooden stairs to the deck of the beach house we’re renting for the entire month of July, with her suitcase in one hand and her makeup bag in the other.

We just drove over seven hours from Athens, where we all attend the University of Georgia together and are proud members of the Gamma Phi Beta sorority. What should’ve been a five hour drive turned into seven thanks to a car full of girls who all had to stop a million times to pee and get iced coffees—hence all the peeing!

Tamara, Nikki, and Becca are my sorority sisters, and have been my best friends since freshman year. We’re four of the most different girls you’ll ever meet, and somehow, our quirkiness drew us to one another, and now we’re inseparable.

“Thank God that storm coming in changed course; now we can spend the rest of the day on the beach. My ass is numb from sitting in that damn car. I need to frolic around on the beach and look for some hotties to party with tonight,” Becca says as she sets her suitcases on the ground beside the SUV.

She packed her entire room
, I think. I just grabbed bikinis, shorts, tanks, sundresses, and a few pairs of jeans and hoodies for windy nights. She has an entire suitcase just for stilettos! Who wears heels at the beach? The only heels I packed are some wedged sandals. I plan on living in flip-flops or being barefooted the entire month.

We’ve saved up for this trip since we got back from Daytona in April. We’re renting this beach house for just the four of us. I have a feeling the summer of 2010 is going to be the best summer of our lives. Becca and I are the only single ones here. Tamara and Nikki are both very much in love with their meathead boyfriends, and have been complaining about being away from them. The guys are in a fraternity together, and they all took a trip to Cancun.

I told them before they graduate, settle down, and start popping out mini football players they need to have a real girls-only getaway. We’re only nineteen, for crying out loud. We’re too young to be tied down to boys. I dumped my loser boyfriend four months ago. While we were all in Daytona together for spring break, the asshole slept with some chick he met at a wet t-shirt contest one of the local dive bars held.

I learned quickly college boys only care about one thing, and that is sex. They may claim to love you and have eyes for only one girl, but let’s be honest—is it really logical to believe a twenty-year-old college guy is going to be monogamous?

All my friends rallied around me and helped calm me down. When I walked into my hotel room Evan and I were sharing with Tamara and her boyfriend Reggie and found Evan having sex with the bottle blonde from the bar, I flipped. I felt as if I was a football player running full-force at the scumbag and the skank he was with.

The look of shock on his face was priceless. He jumped up, wrapping the comforter around himself as he tried to come up with an excuse or reason he was cheating on me with a chick he only knew for about an hour. I didn’t want to hear it. I stomped up to him and smacked him straight across his lying, cheating face. Then, I turned to the girl who was just banging my boyfriend and told her I hoped she enjoyed his pencil dick, because he was all hers now.

I was fuming as Tamara, Becca, and Nikki dragged me out of the room. Every inch of me was screaming to claw his eyes out. Looking back, I’m glad they pulled me out of that hotel room, because more than likely, I would’ve ended up sitting in jail for assault.

We changed rooms, of course, because who wants to sleep in the bed their boyfriend had just fucked some slut in? Then we spent the remainder of spring break partying it up and having the best week of our lives. Being two years away from legally buying my own drinks means nothing when you’re a girl. Guys are more than willing to buy you drinks, whether they are twenty-one and up, or just have a really convincing fake ID.

I don’t think I’ve bought myself a drink the last four months we’ve been going out. Nikki’s brother loaded up my car with beer, a few bottles of Malibu Rum—my personal favorite, because I can make a million different drinks with it—and a few bottles of Grey Goose Vodka.

This summer is going to be nothing but fun in the sun!

As soon as we finish unloading the car, I’m making myself a drink and going to tan on the beach. I love having the beach right at our doorstep. By the time we head back to Athens, I’m going to be rocking the best beach tan, which should last well into fall.

“Is that everything?” Nikki asks, slamming the back passenger door.

“The only thing left is the boxes of alcohol.” I drape my beach tote over my shoulder, grab my two suitcases, and wheel them towards the house, with Nikki not far behind me.

The second we step into the beach house, the energy is explosive. Tamara already has the stereo on in the living room blasting Ke$ha’s
Blah Blah Blah
and all the windows open, letting the salty sea breeze blow into the house. We found a rental with three bedrooms—two with full size beds, and one with two twin beds. We decided on the car ride over that Becca would get one of the rooms by herself, because she is the world’s biggest slob. That girl…I don’t think she’s used a closet in her whole life. Her entire wardrobe is always on the floor.

Tamara and Nikki offered to take the twin beds and give me the other private room, since my parents paid the deposit on the beach house for us. No one in their right mind would rent out their gorgeous beach house to four nineteen-year-olds, so Mom and Dad set it up for us.

“You girlies hurry up and get your swimsuits on. I’ll run down to the car and grab the alcohol so we can officially kick off our summer vacation!” Becca shouts over the music, flashing us all a devilish grin before pushing open the screen door and hurrying down to my car.

Her father gave her a credit card for ‘emergencies’, and for Becca, that would equal bail money. She has been known to get a little too drunk at campus parties and lose her clothes. She’s been in trouble with the campus police more than a dozen times over the last two years.

In record time, all of us are changed and back in the kitchen, playing bartender as we get to work mixing our drinks. With a red solo cup in one hand, and a beach tote and folding chair in the other, we trudge down towards the water.

It’s gorgeous out today, with a little cloud coverage, so the sun isn’t continuously beating down on us. There’s a warm, salty breeze rolling off of the water that instantly helps me relax. There’s just something about the smell of the ocean and the sound of the waves rolling up to the shore that just sets a peaceful calm over me.

We all open up our lawn chairs and plop down in them just at the shoreline so we can dip our toes in the water and sip on our cocktails. I’m drinking a Malibu Bay Breeze; it’s one of my absolute favorite drinks. Anything with pineapple in it, I’ll drink. I added blended ice instead of cubed, which is perfect for a hot and humid day like today.