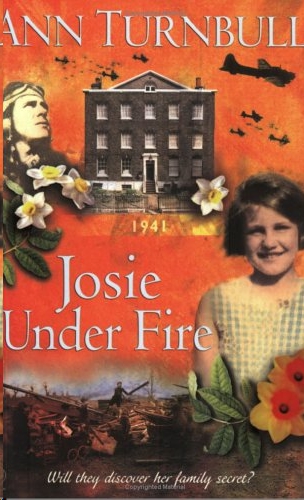 About
The Historical House

This series is a unique collaboration between three award-winning authors, Adèle Geras, Linda Newbery and Ann Turnbull, all writing about one very special house and the extraordinary young women who have lived there throughout history.

When Josie goes to stay with her cousin, Edith, she’s glad to be starting a new life away from the shame that has haunted her family since her brother decided not to fight in the war.

Josie tries to fit in with Edith’s friends, playing on bombsites and teasing a timid classmate. But when the bullying gets out of hand, Josie faces a dilemma: she knows what it feels like to be picked on, but if she takes a stand, will Edith tell everyone her secret? 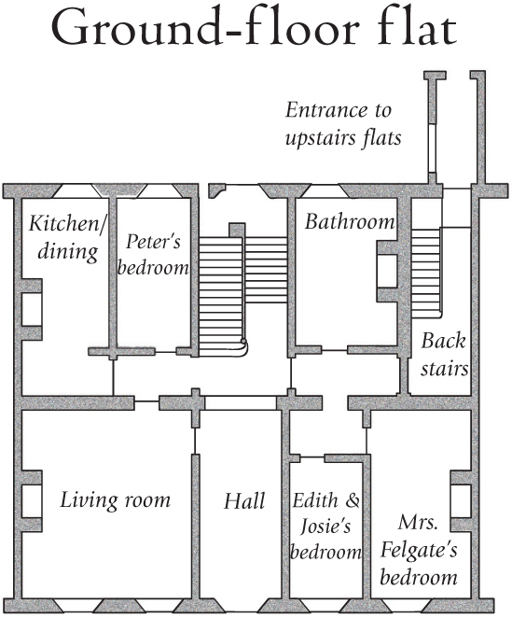 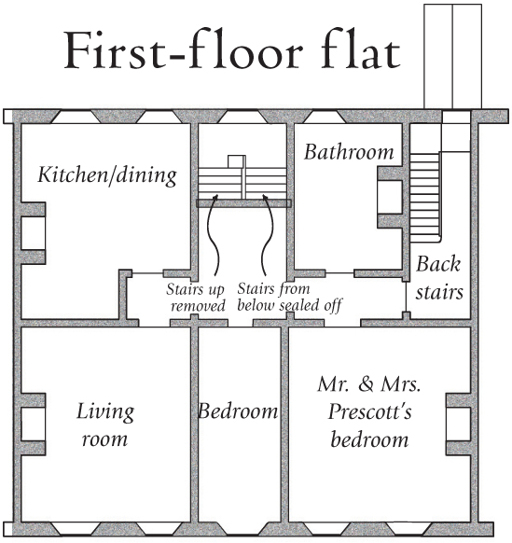 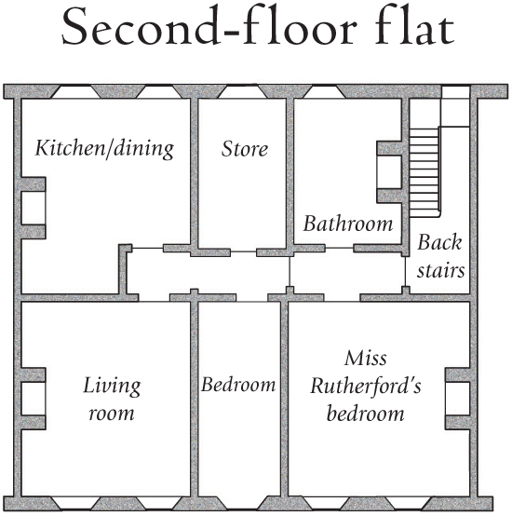 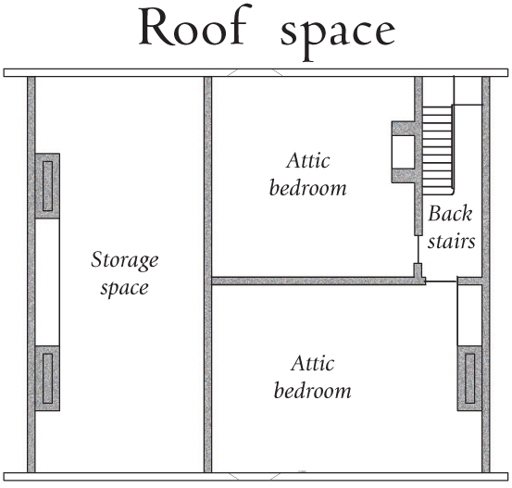 About
The Historical House

A Move to Chelsea 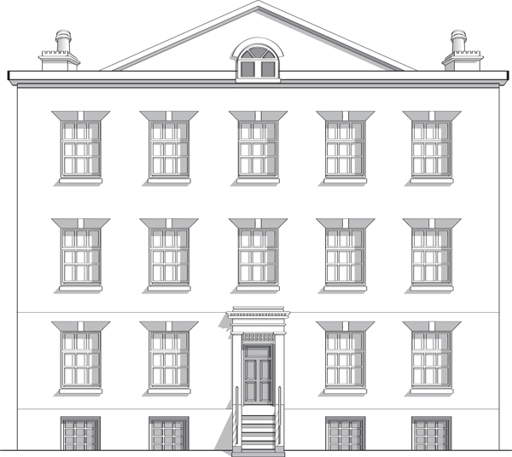 A Move to Chelsea

The house had changed. Silly, of course, to have expected it to look the same, but Josie remembered it from visits before the war began: a big five-storey house of red brick, solid and strong – a house that looked as if it would remain unchanged for ever.

The bushes in the garden had been hacked back, revealing a surprisingly large space in which spring cabbages and onions were growing. A few daffodils showed tight yellow buds. Josie looked up and saw that every one of the windows was criss-crossed with brown sticky tape.

Her mother opened the gate and they carried Josie’s suitcase up a short flight of stone steps to the front door. Josie glanced down into the basement area and saw sandbags piled against the walls. The windows were boarded up.

“Is that where they shelter?” she asked. At home in Greenwich she and her mother had an Anderson shelter in the garden.

“I think so.” Her mother looked momentarily anxious before she said, in a bracing tone, “You’ll be just as safe here as at Granny’s. Safer, probably. And you’ll be with Edith. You’ll enjoy that.”

But it would be strange, Josie thought, staying with her cousin. She’d often visited for the day, but never stayed. And although the families had always been friendly it might be different now, because of Ted.

No, thought Josie, Aunty Grace was always polite and correct. And if she felt differently about Josie now, she wouldn’t show it. But Edith…?

The bell push was labelled “Felgate”. It was the only one because the tenants of the upstairs flats used the back entrance. Her mother pressed the bell.

The door opened, and Josie’s aunt was there, and Edith beside her, and behind them the grand, high-ceilinged hall with its floor of black and white marble tiles.

Josie blushed. She seemed to be growing fast these days, and preferred it not to be commented on. She glanced at her cousin, who was also twelve. Edith did look bigger, and her face was less chubby and childish, but she still had that prettiness – dark curls and a dimple when she smiled – that Josie, with her straight fair hair and glasses, had always envied.

Aunty Grace drew Josie’s mother towards the kitchen, where they chatted as the kettle was put on to boil.

Biddy, the Felgates’ little black cat, crept out into the hall, and Edith scooped her up. “Here’s Josie come to see you.”

Josie stroked the cat. Her own pet, a spaniel named Russ, was being looked after by a neighbour in Greenwich, and she knew she would miss him.

Edith smiled at Josie over the cat’s head. “You can come to my school,” she said. “Mummy arranged it with Miss Hallam.”

“Is she your teacher?”

“Yes. There are only two left now, Miss Hallam and Miss Gregory. All the others have joined the Services. And a lot of the girls were evacuated and haven’t come back. We just go in the mornings.”

Josie thought of her school in Greenwich. That was only part-time, too, but it was enough. She remembered the name calling, the way she was shut out of things, the way even some of the teachers had cooled towards her. Surely it would be better here, among strangers?

“Come and have some tea, girls!” Edith’s mother called.

They followed her into the enormous oak-panelled living room with its expanse of carpet in dark floral patterns. Biddy escaped from Edith’s arms and made straight for the hearthrug in front of the fire.

Josie, looking around, remembered that in the past this room had always had tall vases of cut flowers in it, whatever was in season; Aunty Grace had a regular order at the florist’s. Not now. There were no flowers at all, and the pale damask curtains that framed the long windows were half-hidden behind bulky blackout drapes.

On the mantelpiece were several framed family photographs. Josie’s eyes were drawn to one of a smiling young man: her cousin Peter, Edith’s brother. Peter wore flying goggles pushed up over his leather helmet, and a padded jacket with the collar turned out to reveal its fleece lining; the straps of a parachute harness could be seen around his shoulders and hips; and behind him was his plane – a Spitfire. Josie glanced at her mother and saw that she too had seen the photograph.

A fire was burning in the grate, and tea was laid on a low table: china cups, white napkins, even some biscuits. They sat down, and Aunty Grace handed out little rose-patterned plates. Josie immediately felt anxious that she might drop crumbs or say something insufficiently polite. The Felgates were so formal, so stilted in their conversation. And yet Edith, she remembered, had always been a secretly disobedient child, bubbling under the polite surface, much naughtier than Josie once their parents were out of sight. Would she have changed?

The biscuits were not as good as they looked. They tasted dry; one of those fat-free recipes from
The Kitchen Front
, Josie guessed.

Nevertheless, biscuits were biscuits, and she and Edith ate several each while their mothers talked about Josie’s grandmother, who had fallen in the blackout and broken her hip. She needed her daughter to come and stay for a few weeks – which was why Josie was here.

Lockwood by Jonathan Stroud
We Love Our School!: A Read-Together Rebus Story by Judy Sierra
Persuasion by Martina Boone
Devoted 2 : Where the Ivy Grows by S Quinn, J Lerman
Dream a Little Dream by Debra Clopton
Nocturne by Hurley, Graham
The Gold Eaters by Ronald Wright
The Reunion by Jennifer Haymore
Broken by Janet Taylor-Perry
Desert Divers by Sven Lindqvist