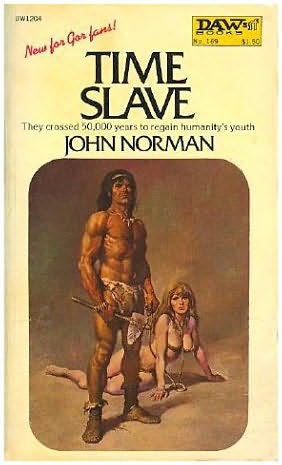 What has happened to man since the days when his rugged ancestors battled the mastodon and the saber-tooth tiger and wrestled a living from the raw nature of a untamed world?
This was the directive that brought a dedicated group of scientists to device a means od sending one of their number back into the OLD STONE AGE when the great hunters of the Cro-Magnon days ripped the world away from the Neanderthals and their savage clan rivals.

Had he not been insane, had he not been an isolate, lonely, scorned, maddened, dissociated and crazed, the uniqueness, the simplicity of it, would doubtless not have occurred to him.

That there should be anything, that was the madness.

It seemed startling, wondrous, that it should be.

As wondrous as suns and stars, the passage of light, and the slow turnings in the night of luminous galaxies.

Who could have predicted that there should be being? From what discursive statements of initial conditions and laws should such a prediction follow? And in the nothingness what entities might serve as values for those individual constants, and as values for those variables, for in the void there was nothing.

From nothing can come nothing.

Dr. Hamilton lit a cigarette, and drew on it, angrily, defensively.

But smoke cannot screen thoughts from themselves.

It did not appear to be a truth of logic, a matter of the meanings of words, or even of the possibilities of thought, that nothing could come from nothing.

Yet in some sense it did seem true, so true, that from nothing could come nothing.

It made no sense to call it a necessary truth, for its negation was semantically consistent, conceptually possible, and yet it seemed, somehow a strong truth, a likely truth.

Astronomers had speculated that, even now, matter grew, forming in the blackness.

Dr. Hamilton studied the smoke. It drifted upward toward the fluorescent tubes, lit from the compound’s generator.

If it could come into being, there seemed little reason to suppose it might not be doing so still.

But it did not seem likely.

The quantity of matter-energy in the universe remains constant.

This was an article of faith, of a transient science in a provisional epoch.

Dr. Hamilton crushed the cigarette out.

Who was to say what was, ultimately, rational or irrational, for these are anthropomorphic predicates, indexed to the brain of an evolving primate, only within the last few thousand years discovering itself in the midst of mysteries.

The lights in the bleak room dimmed and then again waxed bright and soft.

Gunther, with William, Herjellsen supervising, was busy in the hut.

There was not a great deal of power needed for the apparatus. The compound generator produced ample power.

Hamilton speculated, smiling. Electric power, from a gasoline-driven engine, no more than five hundred volts, was ample to the needs of the crazed Herjellsen.

Hamilton did not care for Hegel. Yet the thought, that of Hegel, was difficult to dismiss. We are where the world has opened its eyes.

We were the first animal, to our knowledge, to wonder, to seek to learn, the first to seek not only love and food, but truth.

Men had found truths, in their millions, in its pebbles and grains, but he had not yet found its mountains.

Herjellsen had looked in a different direction. If he had not, he would not have seen what he had.

Herjellsen was mad, but he had seen it, where others had not.

It had come to him in the night, in his cell in Borga. He had screamed and laughed, demented in the cell, tearing the blankets, biting at his own flesh, shrieking with joy.

Hamilton recalled that Kekule’s hypothesis, of the ring theory of the benzene molecule, had come to him in sleep, in a dream, fraught with twisting snakes, before his own hearth. Three-quarters of organic chemistry, some thought, derived, directly or indirectly, from Kekule’s hypothesis. Herjellsen’s had come to him in a madman’s cell. There is no rational procedure for the discovery of hypotheses. There are no machines to produce them. They come as gifts, and sometimes to the mad, to the diseased and crazed, as to Herjellsen. But the procedures for testing hypotheses, be they real hypotheses, if they are genuine hypotheses of science, are public, accessible. The objectivity of science lies not in its genesis, but in its warrants for validity, its procedures for examination and testing, for experiment and confirmation, for, to the extent possible, proof and demonstration. Hamilton was terrified, yet exalted.

It was possible that the Herjellsen conjecture was true.

The preliminary tests had been affirmative.

Again the fluorescent tubing dimmed and then again resumed its normal degree of illumination.

The artifact lay not more than a yard from Hamilton’s hand.

It was rounded, chipped, roughly polished; it weighed 2.1 kilograms. Anthropologists would have referred to it as a tool. It was a weapon.

That there was something, that was the madness.

Who was to say what was natural and what was not? That there was something was undeniable.

Its nature had not yet been ascertained.

Hamilton arose, pushing back the chair.

A remark of Julian Huxley was difficult to dismiss from the mind.

Laughter is the shield. Humor is the buckler against madness, against the mystery, against the immensity. Humanity had little else with which it might protect itself in the forest. It had its brains, its hands, a bit of fury, a loneliness for love, and its laughter. And that laughter, like the gravitational field of a pencil on a desk, miniscule and yet profound, might be heard to the ends of space.

We are smaller than stars but the magnitude of our laughter has not yet been measured.

All that we know rests upon a slender data base, our first-person experiences, and nothing else. Each of us in this sense is alone, in his cage of sensation, limited to his own perceptions. And each of us, a perception to the other, builds his view of the world.

How do we explain the succession, the continuity of our experiences. We postulate an external world of such-and-such a type. In various times and places we would have entertained postulations quite different from those which are now taken to define the truth, and beyond their perimeters we define madness: Herjellsen had ventured beyond the perimeters of the given speculations, the customary postulations, those postulations that define not only what answers may be given but what questions may be asked.

Particles and forces, gods and demons, fields, purposes, collisions, all had served, and some still served, to make sense out of the chaos of sensation, that which must be reconciled and accounted for, our experiences.

Science is not a set of answers, Herjellsen had once told Hamilton; it is a methodology.

We learn from Egyptian star charts that the positions of the fixed stars have changed in the past five thousand years.

So, too, with the dogmatisms of science; what seemed eternal truth when the Parthenon was fresh seems now but a mood of cognition, a moment of advance, a footstep on a path whose destination is not yet understood.

Perhaps a thousand years from now, Hamilton thought, we will see that our current truths, too, were not the eternal verities we took them for, but rather another step on the same journey, leading perhaps toward a truth we do not now understand and may forever fail to comprehend. We must not despise ourselves, Herjellsen had cried, even though we shall pass, and shall be superseded in our turn, for we are a moment in a grand journey, one that began in the caves and must someday, if we do not slay ourselves, take us to the stars.

I have an appointment, he had laughed, with Arcturus, and with infinities beyond.

Hamilton went to the door of the room, and looked out into the Rhodesian night.

The work of Herjellsen had nothing to do with the stars.

Why should he insist that it did? He was mad.

Hamilton looked back at the artifact on the table. It weighed 2.1 kilograms. Anthropologists would have termed it a tool. It was a weapon.

Herjellsen’s work did not have to do with the stars.

What is on the other side of our sensations? Is it truly atoms and the void, or is it an alternative reality?

We may only postulate, and test.

Hamilton could hear the generator now. A black servant was crossing the compound, a box on his shoulder.

There were only two blacks in the compound. The moon seemed bright over the high, wire fence.

Hamilton stepped out on the porch. It would not be wise to stay outdoors too long. It was late in summer.

There was. a reality. It was only that its nature had not yet been ascertained.

It was, Hamilton supposed, a reality beyond contingency or necessity, as we might understand such things. Such predicates were unintelligible in their application to what most profoundly existed. Hamilton thought of Scbopenhauer’s Wille, never satisfied, violent, craving, inexhaustible, relentless, merciless, demanding, greedful, incessant, savage; of Nietzsche’s Macht; of the atoms of Lucretius; of the god of Spinoza, one with the terribleness and sublimity of nature. The reality, conjectured Hamilton, is more profound than gods and men. If there be gods, they, too, are its offspring, as much as stones, and twigs and men, as much as the spaniel and the mosasaur, as much as the pain of love, the smile of a child, the gases of Betelgeuse, the tooth of the shark and the chisel of Michelangelo. It is a reality which may have spawned us, in a moment of bemusement, if only to set us its riddle, to watch us sniff about, and scratch and dig, to try to find truths which it has perhaps, in its irony, not constructed us to understand; the reality, perhaps, once fathering us, has forgotten us, leaving us to one side as a neglected toy, no longer of interest, or perhaps, a sterner father, has abandoned us that we may learn how to grow by ourselves, and be lifted only should we rise upon our own feet; seek me in the godship, it might say; I am waiting for you; but to Hamilton it seemed that the reality, what ever might be its nature, was clearly beyond morality; it was as innocent of morality as the stones of the moon, as the typhus bacillus, as the teeth of the Bengal tiger. The world was built on greed, and on killing, and hunger. To the reality doubtless the barracuda, in its way, was as perfect as the saint. The reality did not choose between them. They were both its children. Hamilton shuddered. The reality was sublime; before it even worship was an affront, a blasphemy. It wanted nothing of men. It needed nothing. It was sufficient unto itself.

Herjellsen did not know, but he had learned that its nature was not as men now thought.

Herjellsen had discovered a small thing. A clue, not well understood.