Read Ivy and Bean No News Is Good News Online

Ivy and Bean No News Is Good News 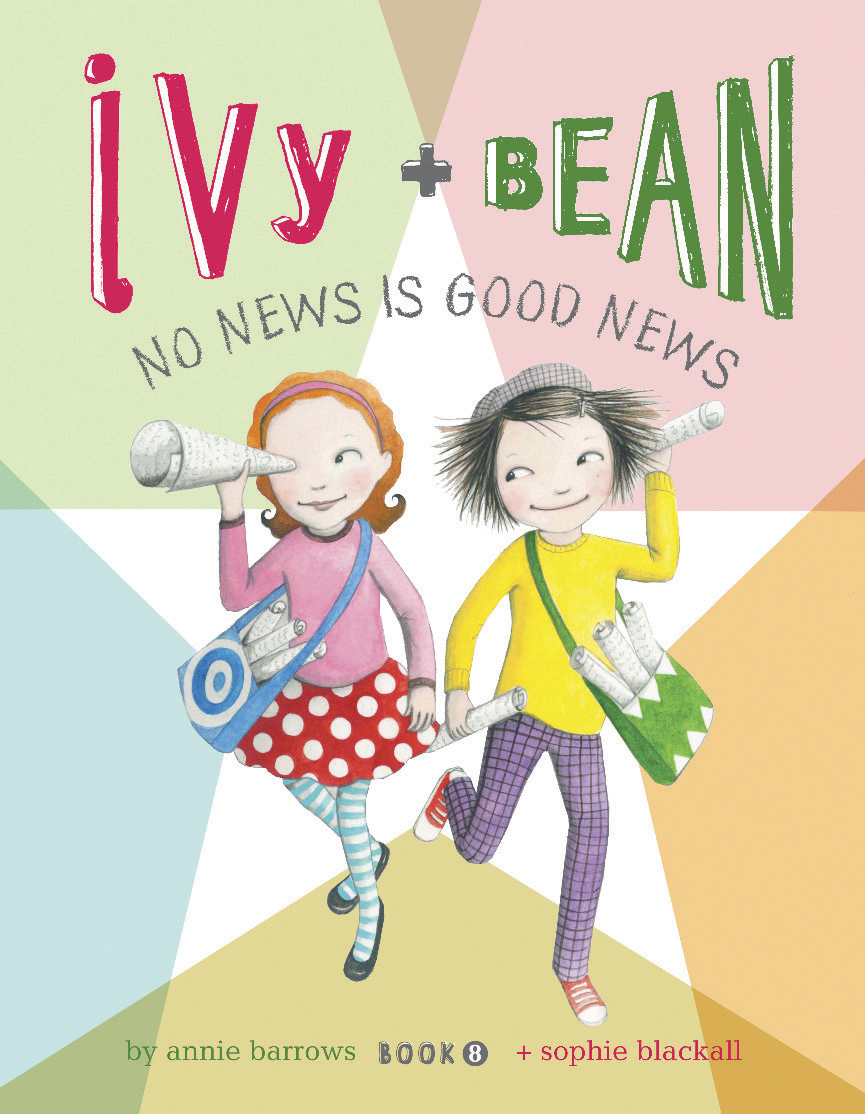 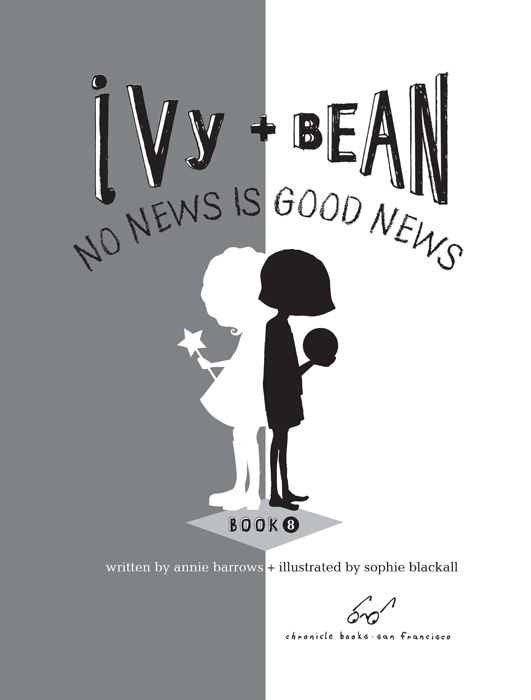 For Margo, who likes cheese and wax.—A. B.
For Bea and Bea, both exceedingly creative with wax and everything else.—S. B.

THE WHOLE BALL OF WAX 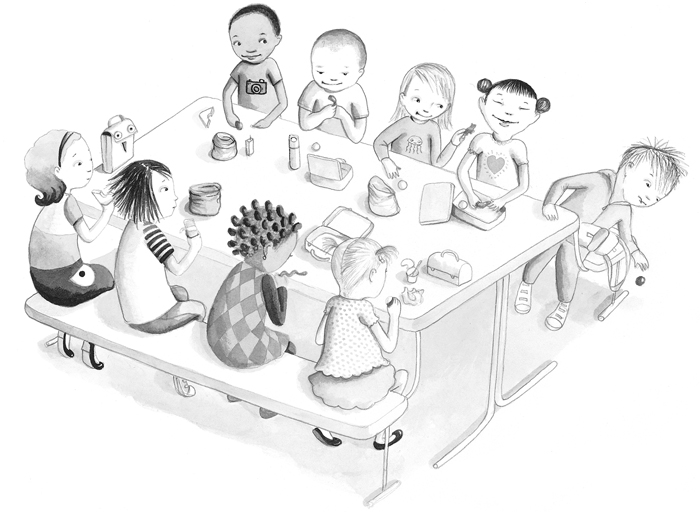 Bean looked around the lunch table. Vanessa had it. She got it every day. Zuzu had it. Emma had it. Marga-Lee had it. Dusit and Eric had it. Even MacAdam had it. Everyone had it except Bean and Ivy.

While Bean watched, Vanessa opened her lunchbox and took out a small red ball. It was a ball of cheese, but nobody cared about the cheese. The cheese was totally unimportant. The important thing was the coating around the cheese. It was wax.

The wax was red. It was smooth. If you pulled on the secret string inside it, the wax split into two halves. You unfolded them and took the cheese out. Sometimes you took a bite of cheese. Mostly, you didn’t. You rolled the wax between your hands until it was warm. Once it was warm, you could squish it. You could squish it and squish it. You could make it into a shape. You could put it on your face. You could hold it for the rest of the day, and it would get dirtier and dirtier, until finally it was a small brown lump. Then you could stick it in the middle of your table and say it was a booger.

Maybe Mom surprised me, Bean thought. Maybe she sneaked a cheese ball in my lunch for a special surprise. She peeked in her lunchbox. Nope.

“Lookit,” said Zuzu. She had made a little wax horn. “I’m a unicorn.” She stuck it in the middle of her forehead.

Bean could grab the horn. She could grab it and run away with it and move to another country where she wouldn’t get in trouble. She sighed.

Ivy poked her with an elbow. “Pretend you don’t care,” she whispered.

“Check this out,” said Dusit. He stuck his wax underneath his nose so it looked like blood was dripping out. “Ms. Aruba-Tate’s going to freak.”

Bean turned to Eric, who was squishing his
wax flat. “Trade you my granola bar for your wax,” she said. She waved the bar at him. “Mmm! Granola!” 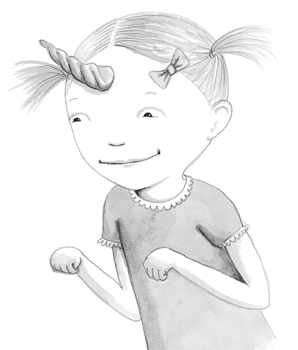 “Why don’t you put it in your ear?” said Bean. “Your mom will think your brains are dropping out.” That’s what Bean would do.

Bean turned to MacAdam. “How about a nice granola bar, MacAdam old buddy? I’ll trade for your wax.”

MacAdam shook his head. He held his red ball of cheese in front of his face and looked
at it. Then he bit it. Bean watched him chew wax and cheese. When he swallowed, she had to look away. What a waste of wax. 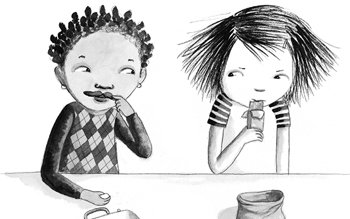 “Lookit,” said Marga-Lee. She had made a mustache out of her wax.

Bean took a sad bite of granola bar. It was going to be a long lunch.

After school, Ivy and Bean slumped home. “What a day,” said Ivy.

“Another day, another dollar,” said Bean.

“What does that mean?” asked Ivy.

“I don’t know,” Bean admitted. “My mom says it sometimes.”

“We don’t have a dollar,” Ivy pointed out.

“If we had a dollar, we could buy our own cheese balls.”

Bean shook her head. “No, we couldn’t. They cost more than a dollar.”

Ivy nodded. “Here’s what I don’t understand. Everyone else’s parents get them cheese. Why don’t ours?”

Together, they trudged around the circle of Pancake Court until they got to Bean’s house. 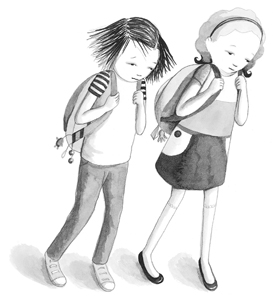 “Fine,” said Bean. The real answer was too complicated. “What’s for snack?”

“I don’t want to hear about that cheese again,” said Bean’s mom. “Have some fruit.”

“Lowfat Belldeloon cheese in a special just-for-you serving size costs five dollars for six little bitty pieces of cheese, so if you want it, you can pay for it yourself,” said Bean’s mom. She had said this several times before.

“Cheese is good for you,” said Bean. She had said this before, too.

“Cheese is not good for you when it costs five dollars for six little bitty pieces,” said Bean’s mom.

“We’d eat more fruit if we had cheese to eat with it,” said Bean.

“I love fruit and cheese together,” said Ivy.

“There’s plenty of cheese in the fridge,” said Bean’s mom.

“Not lowfat Belldeloon cheese in a special just-for-you serving size,” Bean reminded her.

“I DON’T WANT TO HEAR ONE MORE WORD ABOUT THAT CHEESE!” yelled Bean’s mom, stomping out of the kitchen.

Ivy lowered her voice. “She’d probably be in a better mood if she ate—” Ivy glanced at Bean and wiggled her eyebrows.

“Lowfat Belldeloon cheese in a special just-for-you serving size,” they whispered together. 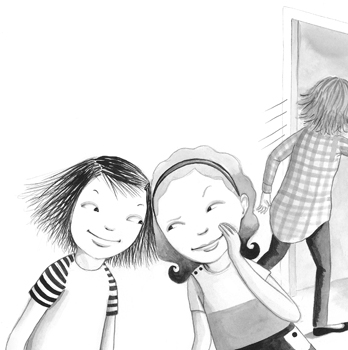 Really, Ivy and Bean didn’t want to hear one more word about cheese either. Words didn’t seem to be getting them anywhere. Ivy had tried whispering “Lowfat Belldeloon cheese in a special just-for-you serving size” in her mother’s ear in the middle of the night. Her mother was supposed to wake up in the morning wanting to buy cheese for Ivy. Instead, her mother woke up while Ivy was whispering and told her to get back to bed pronto. 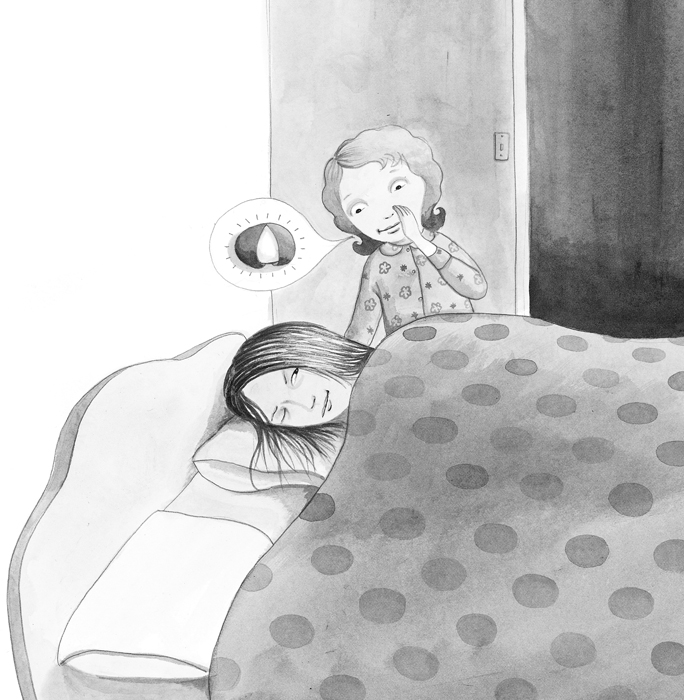 Bean put a sticky note in her mom’s book. In her best and tiniest handwriting, she wrote, “Belldeloon cheese is good!” and stuck it over some other words. She figured if her mom read about Belldeloon cheese in a book, she’d buy some for Bean. Instead, Bean’s mom told Bean to leave her books alone. It was tiring, trying to make parents do what they should. 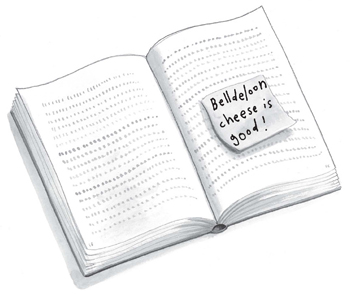 After they had eaten their fruit (boring) and some peanut butter (not as boring, but still) and a little bit of brown sugar (yum!), Bean and Ivy played Eraser Valley. Bean had 56 erasers in different shapes. Most of them were animals, like bears and pigs, but she also
had foods, like french fries and toast. Sometimes Ivy and Bean set up shops and restaurants and schools in Eraser Valley, and life was good for all the happy erasers. But mostly, Eraser Valley was disaster central. There were tsunamis and there were tornadoes. There were avalanches, earthquakes, and plagues. Eraser Valley had been through it all. 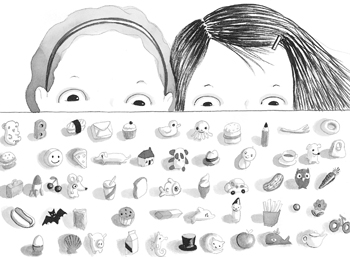 Bean and Ivy lined the erasers up and looked at them. What would befall Eraser Valley today?

“We could sell them,” said Ivy.

“Hey! They’re my erasers,” Bean said. She picked up a sushi and held it tight. “I like them. Not for sale.”

“Then we need money,” Ivy argued. “We have to sell something.”

“Nancy makes money babysitting,” Bean said. Nancy was Bean’s older sister. She was rich. “Do you think anyone would leave a baby with us?” 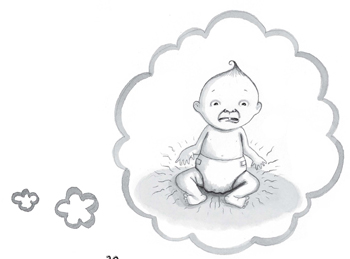 Bean made a worse face. “What if it pooped?”

“Yuck. Forget it. We’ve got to sell something.” Ivy was determined. “What’s it going to be?”

Bean thought of a solution. “Let’s sell some of Nancy’s stuff.”

Bean thought about the time she had borrowed one tiny spool of wire from Nancy’s bead kit. Which Nancy wasn’t even using and Bean had really needed. And which Bean would have given back, if Nancy hadn’t found it in Bean’s room first and completely freaked out. “Okay, maybe not.”

“What can we sell?” Ivy asked. She picked up a toast eraser. “I bet we could get a quarter for this.”

Ivy thought about it. “I’ve never heard of witches making money with magic.”

“Why not?” Bean asked. “Even witches need money.”

“Well, heck!” said Bean. She stood up, causing a major earthquake in Eraser Valley. “What are we waiting for?” 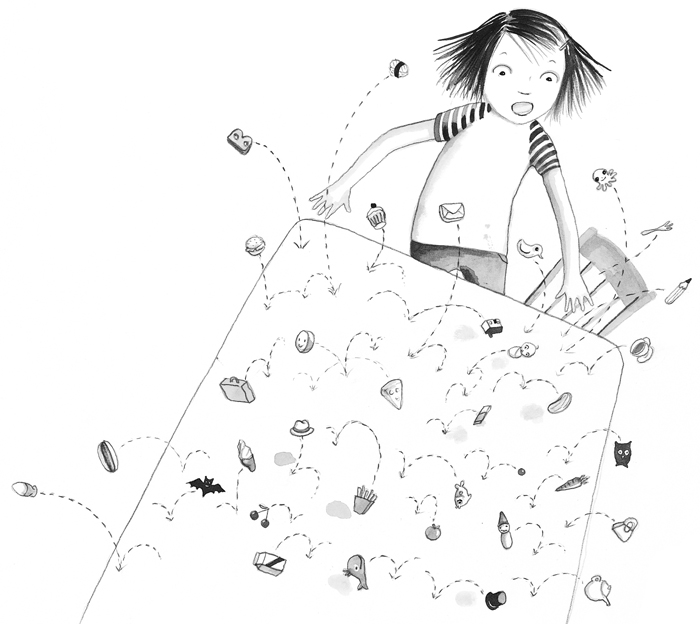