Read It's Got to Be Perfect: the memoirs of a modern-day matchmaker Online

It's Got to Be Perfect: the memoirs of a modern-day matchmaker

BOOK: It's Got to Be Perfect: the memoirs of a modern-day matchmaker
9.22Mb size Format: txt, pdf, ePub
Read Book Download Book
ads 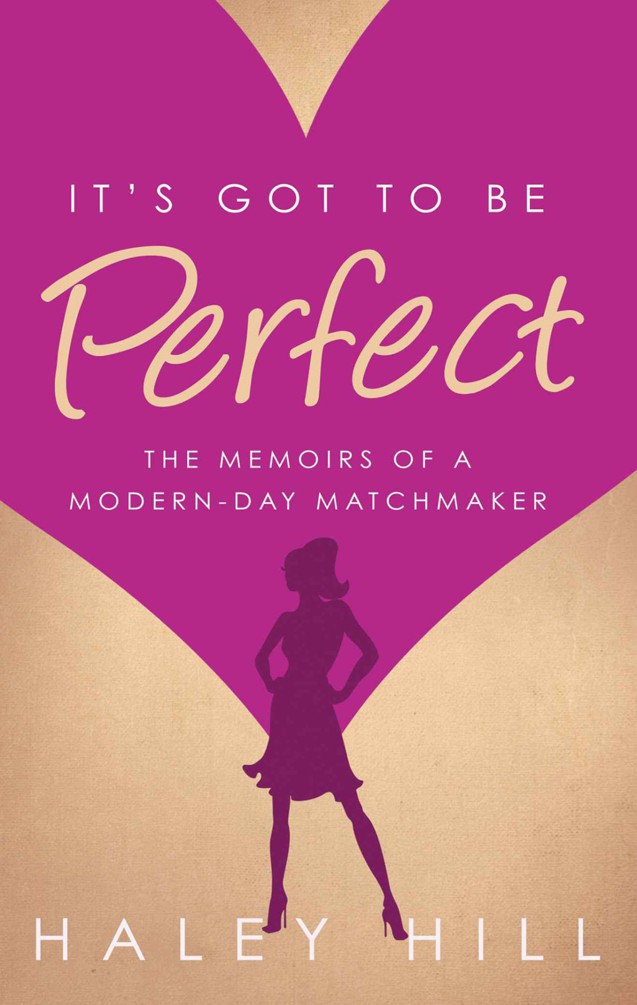 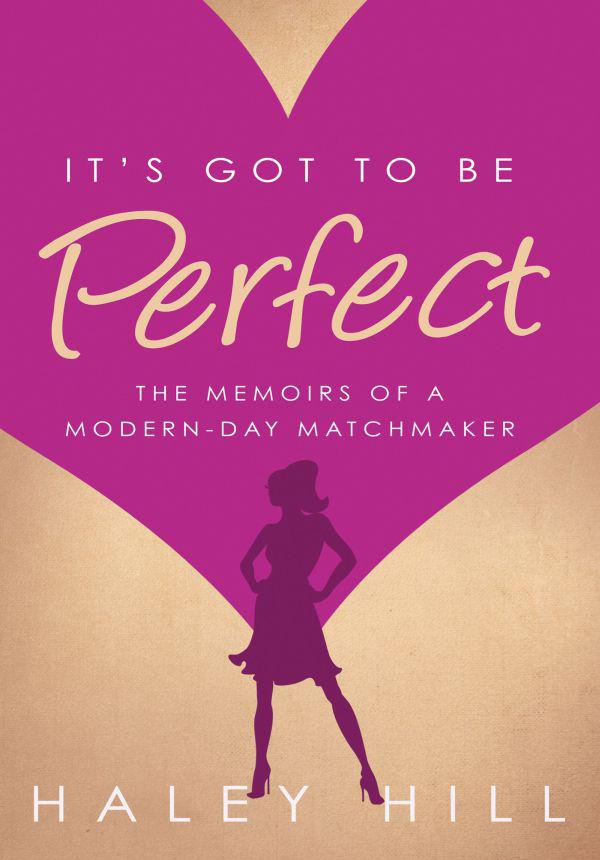 IT’S GOT TO BE

THE MEMOIRS OF A
MODERN-DAY MATCHMAKER

Apart from any fair dealing for the purposes of research or private study, or criticism or review, as permitted under the Copyright, Designs and Patents Act 1988, this publication may only be reproduced, stored or transmitted, in any form or by any means, with the prior permission in writing of the publishers, or in the case of reprographic reproduction in accordance with the terms of licences issued by the Copyright Licensing Agency. Enquiries concerning reproduction outside those terms should be sent to the publishers.

Matador®
is an imprint of Troubador Publishing Ltd

To all the fabulous clients who laughed, sobbed, and on
occasion, vomited their way into my heart.

And to James, for bearing with me.

“If you look for perfection, you’ll never be content
.”
Leo Tolstoy,
Anna Karenina

A NOTE TO THE READER

A NOTE TO THE READER

While this book is inspired by what the author learned and experienced during her career as a matchmaker, none of the characters portrayed are in any way based on real people. Just as Ellie Rigby is not Haley Hill, the names and characters in this book are a product of the author’s imagination. Although real places are referred to throughout, they are all used fictitiously. Any resemblance to actual events or persons, living or dead, is purely coincidental.

‘So Ellie, let’s get this straight.’ Cordelia strode through the exhibition centre entrance, batting leaflet distributers out of the way. ‘He couldn’t come to The Wedding Show because he had an emergency golf game?’

I nodded, scanning a pamphlet about the merits of marrying on a farm.

Cordelia snatched it from me and threw it in the bin. ‘How can knocking a ball into a hole ever constitute an emergency?’

‘It’s more a meeting on a golf course. The meeting was the emergency.’

She raised her eyebrows, an action I was unsure whether was directed at me or the taffeta monstrosity that was about to be paraded down the runway.

I stopped and looked around. It was as though we’d walked into a five-year-old girl’s utopia. A fantastical land of pink, white and silver. Cakes of every flavour, shape and size were stacked up in front of us like turrets on a castle. Beyond were stands loaded with shoes, dresses, tiaras and veils. It looked as though a fairy godmother had zipped through with her wand leaving trails of diamonds, pearls and crystals in her wake. I imagined if I spun around on the spot, my skinny jeans and vest would transform into a sparkling gown.

My daydream was interrupted by a burly mother-of-the-bride who steamrollered past me, her gaze fixed on a flamboyant feather fascinator. After I’d regained my balance, a salesgirl sprang out from behind a stand, wielding an elaborate-looking headpiece and a horror movie smile. Cordelia sidestepped her and then dragged me towards a champagne bar.

It wasn’t long before we were on our third glass.

‘Then a photo of a minge pops up.’ I said, taking another gulp.

Cordelia shrugged her shoulders and sighed. ‘They all do it.’

‘It wasn’t even a nice-looking one.’

She screwed up her mouth. ‘Are any of them nice-looking?’

She gestured for more champagne. ‘Generally he hides it quite well.’ She paused. ‘Although the other day, when I was looking online for a recipe, a site called flappy flanges came up.’

I laughed, wondering what search term she’d entered. ‘What is it with the flaps? I mean, I suppose I get the whole pretty girl naked thing. But some of those sites, they’re a bit, you know.’

I twirled my engagement ring around my finger. ‘And he’s been going to strip clubs. I found the receipts.’

She raised her eyebrows.

‘He says it’s a work thing. But I don’t see how he has to spend five hundred pounds on private dances to secure a deal. Surely that’s going above and beyond the call of duty for an investment banker?’

She chuckled. ‘You have to be firm with them. Once Harry tried to convince me that a weekend in Ibiza with the salesgirls was essential for team morale.’

I took another swig of champagne. ‘I’ve tried to talk to him about it but he just fobs me off. Says his ex-wife never used to mind. He thinks I’m insecure.’

She laughed. ‘Imagine how he’d react if you were hanging out at Adonis’ every weekend having giant schlongs dangled in your face?’

I sighed and swirled the champagne around in my glass. ‘But I don’t want that.’

‘And he can’t exactly call her his ex-wife if the divorce hasn’t gone through yet, can he?’

I scanned the room and watched a girl squashing her foot into a tiny diamante shoe. ‘He said it should only be a couple more weeks until the decree absolute. Then we can set a date.’

Cordelia looked at me for a moment as though trying to read my expression. Then she grabbed the remainder of the champagne and jumped down from her stool.

‘Right then,’ she said, barging past a bewildered-looking groom, ‘we’ve got a wedding to plan.’

By now the place was rammed. Wide-eyed brides and their entourages darted frenetically from stand to stand, scooping up wedding wares by the armful. As we pushed up the aisles, we were bombarded by poster images of porcelain-skinned brides who looked as though they had been plucked from a remote island of purity where men only existed as legends of honour, valour and glory. I tried to imagine the groom lifting the bride’s skirt and re-enacting a scene from one of Robert’s movies, but somehow my brain refused to comply. I took another swig of champagne.

Just as I went to offer Cordelia a refill, I saw her weaving towards a stand, which looked to be exhibiting underwear. I glanced up at the sign:

“Débauche: lingerie for the contemporary bride”

When I caught up with Cordelia, she span around waving a pair of white lace crotchless knickers.

‘Maybe Robert would like a pair of these?’ she said and smiled.

I grimaced. ‘He’s not a cross-dresser.’

I peered through the hole in the gusset, then raised my eyebrows.

‘As some kind of porn-diversion strategy?’

She giggled. ‘You’ve got nothing to lose.’

‘Except my dignity,’ I said handing them back to her.

‘Besides, I thought flapping flanges were Harry’s thing.’

‘Flappy not flapping,’ she said, attempting to hang them back on the rail.

Suddenly a small woman with a large nose and orange lipstick appeared between us and snatched the knickers from Cordelia.

‘My friend’s getting married.’ Cordelia nudged me forward, smirking. ‘She wants something special for her groom.’

The saleswoman looked me up and down, then stepped back and cocked her head.

‘34C,’ she said, then began selecting bras from the display without diverting her gaze from my chest. ‘Although the one on the left might be more of a B.’

I stood silent for a moment, wondering how I had reached twenty-eight years of age without realising I had asymmetrical boobs.

‘And you’re wearing the wrong bra.’

‘Yes,’ she said, piling undergarments into my arms. ‘A balconette suits a broad ribcage much better than a plunge.’

‘You’ll need a thong too. That will detract from your thick waist. You’re a size twelve, yes?’

Moments later, while I was still digesting the news that I had a man-sized ribcage, and no waist, I found myself braless in a changing room along with the saleswoman, who I now knew was called Rosemary. She was brandishing a tape measure and an assortment of Backdoor babe-style lingerie.

BOOK: It's Got to Be Perfect: the memoirs of a modern-day matchmaker
9.22Mb size Format: txt, pdf, ePub
Read Book Download Book
ads