Read It's a Don's Life Online

It's a Don's Life 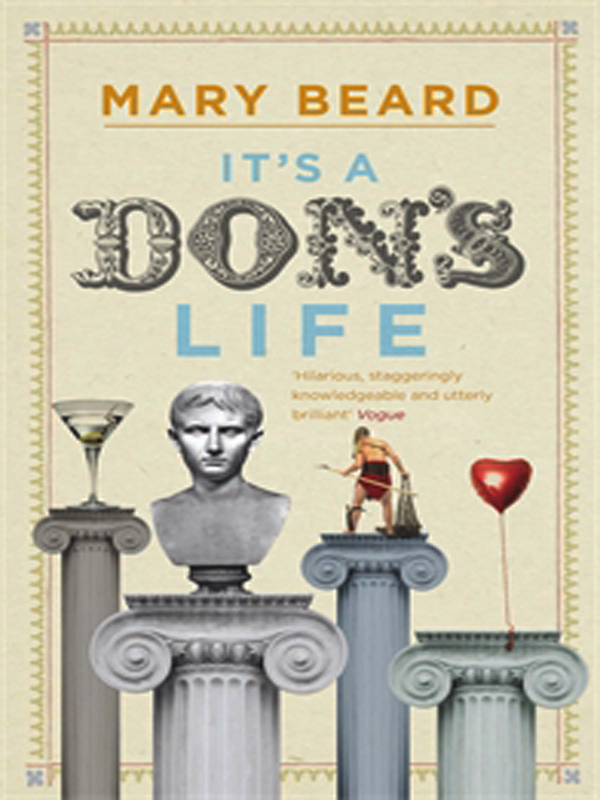 Pompeii: The Life of a Roman Town

The Colosseum
(with Keith Hopkins)

First published in Great Britain in 2009 by

This eBook edition published in 2009

Typeset in Minion by MacGuru Ltd

This eBook is copyright material and must not be copied, reproduced, transferred, distributed, leased, licensed or publicly
performed or used in any way except as specifically permitted in writing by the publishers, as allowed under the terms and
conditions under which it was purchased or as strictly permitted by applicable copyright law. Any unauthorised distribution
or use of this text may be a direct infringement of the author’s and publisher’s rights and those responsible may be liable
in law accordingly.

Sex in the sculpture garden

Is Latin too hard?

Does Latin ‘train the brain’?

What are academics for?

They make a desert and call it peace

The knife and fork test?

Keeping sex out of scholarship

In the news in Pompeii

What makes a good review?

Veils, turbans and ‘rivers of blood’

Where is your spleen?

What did the Romans wear under their togas?

The tragedy of George Bush

Pissing on the pyramids

Sex on the Beach

Exams are getting harder – shock

Racism in Greece and Rome

Paganism without the blood

Is David Cameron a Narcissus (... Or, was John Prescott right?)

How to order a coffee in American

What is Big Brother doing in Durham cathedral?

Are A levels (still) dumbing down?

Esperanto, Welsh and the language wars

10 things you thought you knew about the Romans ... but didn’t

Upstairs at the brothel

How many academics does it take to buy a coffee maker?

Tips for new students – from an old don

How am I doing on Amazon?

A life in the day of a don

My five favourite Roman classics ... that we have lost

Why didn’t the Athenians give the women the vote?

Want a motto? Do it in Latin.

The rape of Britannia

What made the Romans laugh?

A day in Guantanamo

Let’s Get Rid of the Fascist Olympic Torch

Keep Lesbos for the Lesbians

The face of Julius Caesar? Come off it!

Why ruins are disappointing

Why research is fun

Heard the one about the Roman and the barber?

A good old-fashioned 2.1 is better than a Higher Education Achievement Record

Barack Obama – and the first ‘African-Roman’ emperor of Rome

What’s in a don’s inbox?

While every effort has been made to contact the authors of comments quoted and copyright holders, the author and publishers
would be grateful for information about any they have been unable to trace.

A don’s life is enormously rewarding – and fun. I can think of few better ways of earning a living. It is also hard work,
frustrating, and all too often misrepresented. In the absence of any other news, a desperate journalist can always fall back
on taking a pot shot at the three-month summer holidays we dons are supposed to enjoy, or on whipping up outrage about the
‘unfair’ selection procedures of Oxford and Cambridge in particular. Do we really only let in those kids who can tell their
sherry from their port, or have been trained to cope with our impenetrable – and, frankly, mad – questions?

Since April 2006, my blog –
A Don’s Life
– has shared some of the day-to-day realities of working in a university, and tried to quash a few myths. No, the summer vacation
is not a ‘holiday’. You won’t find us on the golf course or the beach (unless we are working on seashore beetles, that is).
And no, we don’t dream up interview questions about what it would feel like to be a light bulb or a strawberry, just to trip
up the unwary (for the inside story).

Of course, Cambridge is not a ‘typical’ university. There’s probably no such thing. I’ve worked in three, in Britain and the
US, and each one has been very different. All the same, I’m sure that many of the themes of
A Don’s Life
would be recognisable in any university, anywhere in the world (take a look at the ‘willy waving’).

I’m also a classicist – a species far less endangered than you have no doubt been led to believe. The blog tries to capture
something of the pleasure, and the point, of studying the Greeks and Romans: from ancient Roman jokes to the discovery of
a battered statue from the river Rhône, which may (or, more likely, may not) be a portrait of Julius Caesar.

The posts included in this book are published more or less as they appeared on the blog – with only the occasional explanation
added, spelling mistakes corrected and (regular readers of
A Don’s Life
will be relieved to learn) apostrophes inserted where required. You can dip into them in any order. But there
is
a narrative that runs from start to finish, from my very first tentative post ‘Pink or purple’ to the semiprofessional blogger
at the end.

I suspect that, over all, the blog makes my life seem more exciting and action-packed than it really is. I’ve tried to capture
the flavour of an average day. But in general there is not much ‘blog-worthy’ about an evening spent marking fifteen essays
on the run-up to the Peloponnesian War (fascinating a subject as it is), nor about a morning in the library failing to find
that crucial reference in Cicero (or was it Livy?) that you’ve lost.

And it’s not easy to share all those hours spent teaching the students and thinking about how they are getting on. After all,
no undergraduate wants to find the failings of their latest essay or exam discussed with the rest of the world on the web.
No doctoral student wants to see the latest chapter of their thesis publicly dissected. Do bear this in mind as you read –
and turn to the essay at the end of the book for further more leisurely reflections on the ‘blogosphere’.

You will also find here a growing relationship with a wonderful group of commenters. The comments on many blogs are little
short of abusive rants. Not so those on
A Don’s Life
, which often reflect with wit, learning and experience on the subject at issue, whether it be the bones of St Cuthbert, David
Beckham’s new tattoo or the real identity of that statue pulled from the Rhône. Some of my favourite comments are included
here, as they appeared on the blog (occasionally shortened, but not edited in any other way).

I am tremendously grateful to all those commenters who gave permission for their comments to be reprinted. It is to those
who have commented most often over the years that this book-of-the-blog is dedicated.

You can find, and comment on, my blog at:

Our undergraduates trooped back to college this weekend to be greeted by a big poster explaining how they could ‘find their
seat’. Not helpful advice from the housekeeping department. But timely information from the University examinations office
to all those students who apparently don’t know where their exams are held, and don’t know where to sit even if they do.

Easter term in Cambridge is all about exams. Intellectual ambitions get traded in for an anxious diet of revision, morale
boosting and what used (before it was banned) to be called ‘hand-holding’. We give parties to take their young minds off it,
supervisions to put them back on again. And more advice is asked for and given than even the biggest swot could take in.

In the old days we could escape a bit, by locking ourselves in our rooms and putting ‘OUT’ on the door. But now emails get
you any time of day or night – sillier as the term wears on. ‘Dear Professor Beard, Hope you don’t mind me asking but is it
OK to write in pink fibre tip, or would purple be better ...?’ as one emailed me last year. (Answer: Try black/What do you
think?/No, I don’t think you’ll fail ...).

And when the day of reckoning arrives, we’re all so keen for our charges to succeed that we turn ourselves into an unpaid
taxi service. Any morning in the second half of May, you’ll find the same touching scene repeated all over Cambridge: a tutor
driving to the exam room at top speed, transporting some burly young lad with a handsome golden hello from McKinsey’s already
in the bag – all because his alarm clock didn’t go off, or he was hung over, or he’d forgotten where his seat was. (In every
other university in the country, I should say – except probably Oxford – getting yourself to the paper on time is thought
to be part of the test.)

So is it all worth it? Some of us, given half a chance, would simply scrap the lot. ‘Continuous assessment’ would look more
humane and it may well be fairer to women (who, across the board, don’t do as well as men on the current system). And it certainly
wouldn’t take such a ridiculous amount of time and energy all round – which is in danger of seeming out of proportion when
some 70% of these kids will now get a 2.1 in their final exams anyway.

For better or worse, grade inflation or superior student effort, gone are the days of the ‘gentleman’s third’; thirds are
now the human tragedies. And I’ve even heard it, half-seriously, suggested that we should just give them all a 2.1 as a matter
of course, and that exams should only be for those who wanted to ‘bid for a first’. That would certainly cut down the labour.

But I can’t help thinking that there’s life in the old system yet. For a start, no problem with plagiarism. Unlike with ‘assessed
essays’, done in their own time, you don’t have to type every suspiciously clever phrase into Google to find out where it
might have come from.

Anonymity, too, is a good protection all round. We don’t actually know who wrote the scripts we are marking (and, as they
now word-process all their term work, we don’t even recognise their handwriting like we used to). While they don’t have much
clue who on our side is marking them – certainly not enough of a clue to be able to take the American option of sending their
parents or lawyers into your office, or in the worst case appearing with a gun to demand higher grades.

And having lived through GSCE and A level course work at home, I can’t imagine I’m the only one to think that ‘continuous
assessment’ might be a lot more painful than this old-fashioned form of ‘sudden death’. Just stress all the year round.

Memoirs of a Wild Child by P Lewis, Cassandra
The Photograph by Beverly Lewis
Slide by Garrett Leigh
The end of the night by John D. (John Dann) MacDonald, Internet Archive
Up in the Air by Walter Kirn
Effigies by Mary Anna Evans
Spirit by Ashe Barker
Surrender Your Grace by Maddie Taylor
The Forbidden Library by David Alastair Hayden
A Table for Two by Janet Albert