Read It Really IS a Wonderful Life: The Snowflake Falls but Hearts in Love Keep a Home Warm All Year Long Online

It Really IS a Wonderful Life: The Snowflake Falls but Hearts in Love Keep a Home Warm All Year Long 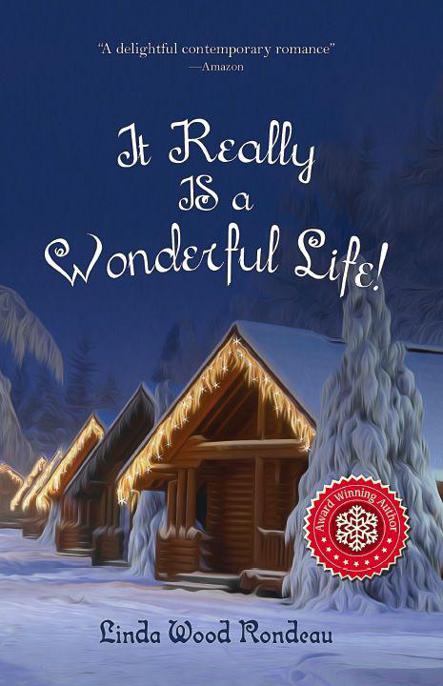 It Really
IS
a Wonderful Life

IT REALLY IS A WONDERFUL LIFE BY LINDA RONDEAU

Published by Lighthouse Publishing of the Carolinas

Available in print from your local bookstore, online, or from the publisher at:
www.lighthousepublishingofthecarolinas.com

For more information on this book and the author visit:
www.lindarondeau.com

All rights reserved. Non-commercial interests may reproduce portions of this book without the express written permission of Lighthouse Publishing of the Carolinas, provided the text does not exceed 500 words. When reproducing text from this book, include the following credit line: “It Really IS a Wonderful Life by Linda Rondeau published by Lighthouse Publishing of the Carolinas. Used by permission.”

Dorie threw the letter and shrugged as it landed on top of the leftover peanut butter sandwiches. Maybe she should finish reading it, just in case she’d misunderstood the opening paragraph. She picked up the memo again and flicked off the residue along its edges, skimming the next few lines. When done, she subdued the urge to scream. The kids were asleep—finally.

As she read, she mouthed the words with clenched jaws. “Thank you for your interest in Bargains Galore. I am sorry to inform you that the position for which you applied has been filled… .
Blah, Blah, Blah
. Sincerely, James Paul Sullivan …”

Regardless of the perfumed words, they still stung.

“What is it with this town?” She ripped the rejection into pieces and tossed it into the trash. “I can’t even get a job at the local dollar store. Somebody, somewhere, must need a computer programmer.”

Focus on the positive, Dorie
. Mom’s voice echoed in her memory. She’d spent a great night with the children, her favorite people, a read-a-thon and
Fern Gully
, and bedtimes with no rebuttals from Josh or squalls from Emma, all huge positives.

But when the kids went to sleep, the nights became a desert crossing, interminably long and arid. She settled into the recliner—Devon’s chair—and flipped through the television channels. Nothing of interest. Just news, reruns, or cartoons.

She clicked off the television and picked up the newspaper. With a discordant sigh, she skipped over the first seven pages and turned to the classifieds. Scanning the five employment ads, she screeched an entire sonnet of Midville condemnations, then threw the paper at the wall.

Now her tirades beamed toward her late husband. “Devon, you had no right to get yourself blown up fighting a war nobody cares about anymore. How do you expect me to raise these kids on my own when I can’t even get a job?”

Boomer’s bark brought her back from the edge of uncontrolled rage, a precipice she teetered on all too often these days. He nudged the crumpled newsprint in her direction. Some people believed Irish setters could read minds, but the last she knew, they couldn’t read newspapers. Maybe he sensed something there—something good.

A breeze from the open window stirred its pages.

She bent over to pick it up. A jelly smudge brought her attention to the announcement:
Midville Players casting call
. Who would have thought a puny town like Midville would have a drama group?

Curiosity numbed her anger. “Midville Players will hold auditions for their upcoming Christmas production of
It’s a Wonderful Life—
”

Did she dare? She’d played an angel in a Christmas pageant once. That had been a lot of fun, and her teacher had said she was the best angel. This would be different, though. Still, what was the worst that could happen?

You’d look like a fool and find new depths of rejection.

Discretion warned her to avoid any more opportunities for failure.

Devon had always encouraged her to try new things. Besides, didn’t Daddy say the best way to find a job was to circulate? Since moving to Midville four months ago, her only networking had been with her parents’ retired church friends. Time to find a new circle of friends closer to her age.

She picked up the phone and hit the first number on her speed dial. “Mom, will you watch the kids for me tomorrow night?”

Jamey Sullivan engaged the security system, then stepped outside Bargains Galore. He took out his Android and called Sherrie, his store manager.

“Glad to hear your laryngitis is gone.” He’d hate to face another day of ledgers, carbon copies, and miles of cash-register receipts. Sullivan Enterprises operated in the dark ages of business machines.

“Don’t worry. I’ll be back to train the new cashier tomorrow.”

“Glad to hear it. I hate the system we’re using. We need an overhaul.”

Sherrie huffed her defense. “Not a day goes by without your saying so, Mr. Sullivan. Our current system worked fine until we added the new stores. Maybe we do need a new way of doing things, but you know how I feel about change.”

Sherrie had been with Sullivan Enterprises since Jamey’s father opened the first store. Who better to lead the company into a new age? However, she’d refused every training offer he’d made. Not even Pop could change her mind.

He sensed her empathy. “Thanks for asking. He keeps losing ground every day. He’s fading away before my eyes. I’d give anything to go fishing with him one more time.”

There weren’t many in Midville he’d miss when he left, except for Sherrie and his high school buddy Gabe Wellington. Sherrie was like his second mother, sure to pin his ears back when he needed it and even quicker with an offer of encouragement when faced with disappointment.

“Not many sons would have done what you did, Mr. Sullivan, giving up a promising career to help an ailing parent. Midville’s proud of you.”

Midville might be proud of him, but any good deed wears thin after a while. Wasn’t four years enough of a sacrifice?

“By the way, aren’t you late for auditions?”

“On my way. Take care of yourself … see you tomorrow.”

Jamey checked his watch, pocketed his Android and hopped into his Nissan. He missed his Audi. Even his old Mini Cooper had more class than this gray sedan. He’d grown to accept it though, since Pops gave it to him. How could he refuse a dying man?

Jamey sighed as he turned onto the main road. Community theater could hardly match the thrill of Broadway, but for the moment, Pop needed him more than The Great White Way needed another self-deluded actor.

Yet, the unknown lingered in his soul. “For all sad words of tongue or pen, the saddest are these ‘it might have been’.”

He’d wanted to take over the business from Pop, to do this one last thing for him. Love demanded it, not duty. Yet, Jamey doubted his motives. Was he still the little boy trying to win Pop’s approval?

When Pop got so sick that he’d stopped coming into the store, Jamey had suggested Pop sell the business since Junior Harwood wanted it badly enough. But Pop wouldn’t hear of it. Every time Jamey brought up the possibility Pop gave the same well-rehearsed monologue. “Son, Sullivan Enterprises prevents Harwood Industries from monopolizing Midville’s economy. Having two horses in town gives folks options.”

Jamey squeezed the steering wheel, his frustration intensifying with each thought. He’d have to tell Pop sooner or later about signing with an agent, but if he left now he’d feel like a traitor, deserting Pop when he needed help the most.

Jamey pulled into the Little Red Hen Preschool and surfed for a parking place. His usual spot next to Aunt Gillian had been taken by the owner of a red Cavalier with nearly bald tires and a scratched bumper. No one in the theater group drove that model. Someone new? Good. Midville Community Theater needed a few fresh faces.

He found an empty spot and let the Nissan idle while he convinced himself he should go through with the audition. What if his agent called? If he landed a role, would dropping out be fair to the cast?

Zeke “The Parrot” Fournier would make a good understudy. He never put his own slant on a role, but he could mimic anyone. Danny Riley was directing this play. If no one else understood Jamey’s hasty departure, Danny would.

But the question was, would Pop?

Dorie scanned the large play room of the Little Red Hen Preschool and took two deep breaths to calm her nerves. This seemed an odd place to hold auditions; then again, nothing about Midville fitted her expectations. While the crowd mingled, Dorie stood against the wall and trained her eyes on the carpet. If she kept still enough, maybe no one would notice her.

How silly. That would defeat her whole purpose in coming.

She glanced over the assembly of hopefuls for a familiar face. An older woman across the room looked like someone from Mom’s church.

Dorie shook her head with the thought. After four months, shouldn’t she think of Midville Community Church as her own? It’d be nice to feel more connected, but how?

Dorie strained to remember the woman’s name but blanked.

She caught a glimpse of a young man, mid to late twenties, coming toward her, not surprised she didn’t know him. Except for her parents, their pastor, and their friends, everyone in Midville was a stranger.

“Is this your first audition?” he asked.

At first glance, the obese giant of a man resembled Emma’s roly-poly doll, and Dorie half-expected him to rock back and forth when he talked. Zeke’s smudged work pants hung embarrassingly low off his waist. At least she guessed his name was Zeke since that was the name on his greasy shirt. She should be courteous. So far, he was the only one who seemed to notice her. And she had come here to make friends. Zeke looked like a mechanic, and a mechanic might be a good friend to have since Devon’s seven-year-old Cavalier rattled a bit here and there.

Daddy harped daily that the car needed new tires and a battery. He even went so far as to insist that Dorie buy an SUV. “Four-wheel drive is better for North Country winters.” Daddy was probably right. A lifelong car dealership owner, he could probably wrangle her a good deal, but no way could she part with Devon’s car and not feel like a traitor.

There was something likeable in the man’s friendliness. Guilt flushed through her soul because of her snobbery. “I’m Dorie Fitzgerald. I’m a little nervous. How does this thing go?”

“Have you filled out your audition form yet?” Zeke pointed toward a rail-thin woman whose child-sized knit top hung on her body like a shawl. She handed out forms with the efficiency of a nurse at a vaccination clinic. “You need to see Evie. And don’t be nervous. This theater group is pretty casual. I guarantee there’s not a wild animal in the bunch.”

“Everyone I’ve met in Midville seems nice. I’m relatively new in town. My folks retired here a few years ago. I joined them in June.”