Read Is It Wrong to Try to Pick Up Girls in a Dungeon?, Vol. 5 Online

Is It Wrong to Try to Pick Up Girls in a Dungeon?, Vol. 5 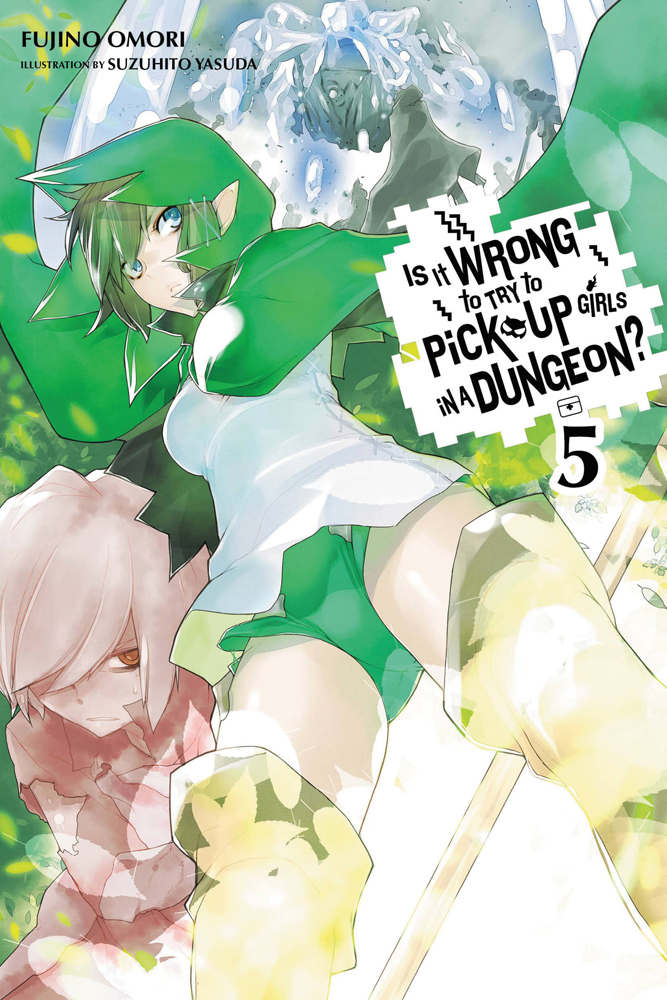 The scanning, uploading, and distribution of this book without permission is a theft of the author’s intellectual property. If you would like permission to use material from the book (other than for review purposes), please contact [email protected] Thank you for your support of the author’s rights.

The sun lit up the sky.

It rose above the eastern wall of the city, illuminating all of Orario in the process. The massive white tower in the middle of the city, the solemn Pantheon where adventurers gather, the wide Coliseum—all of them were bathed in soft morning light. The city’s citizens were already going about their day. Humans and demi-humans filled the streets, the sounds of their voices and footsteps making Orario come to life.

“Sorry t’ drag ya out this early in the mornin’, Phai-Phai. Don’t want ya thinkin’ I’m forcin’ ya.”

“It’s nothing. I’m always alone, so it’s nice to eat breakfast with someone every now and then.”

Two goddesses sat around a table of food in a building located between Northwest Main and West Main streets. Noise from the people outside came in waves as they passed by.

One goddess, the vermilion-haired Loki, squinted her already narrow eyes as the crimson-haired goddess with a bandage around her eye, Hephaistos, smiled back at her.

“Just wanted t’ say thanks again for lending my kids some of your smiths for their expedition. They’re a big help.”

Hephaistos graciously accepted Loki’s words of gratitude and asked a question of her own. “Think nothing of it. First access to drop items from the Lower Fortress is all the thanks we need. What about your children? Do you think they’ll make some progress with this expedition?”

The wooden building where they were eating was a perfect square. The two deities sat on the second floor with no one around except for one animal-person staffer. The restaurant all to themselves, Loki and Hephaistos reached for the cutlery sitting on top of the white cloth covering the table between them.

“They had quite a bit of trouble last time, but I got a hunch that this time’s the charm. Even left chanting ‘Gonna make it!’ And now Aiz’s Level Six. Everyone’s lookin’ the part.”

Chomp.
Loki’s jaws clamped down hard on a piece of meat at the end of her fork. Directly across from her, Hephaistos elegantly manipulated her utensils and took small bites as she watched Loki gulping down the water in her glass.

“…By the way, Phai-Phai. Got any info on Itty-Bitty’s kid? Anything at all?”

“Curious ain’t the right word…She’s just so full of herself. Swingin’ those ridiculous knockers of hers around for the whole world ta see, gettin’ all cocky. It’s really pissin’ me off…”

Hephaistos couldn’t help but crack a smile as Loki continued her litany of complaints.

“One of my children has joined a party with Hestia’s boy. I believe they’re going to the middle levels today.”

“Eh? So you’ve been two-timin’ with me and Itty-Bitty? Sending smiths all over the place, aren’t ya.”

“He’s signed a direct contract with the ‘Little Rookie.’ My child appears to be quite taken with Hestia’s boy.” Hephaistos brought another piece of food to her lips, still smiling as she spoke.

Loki, however, was not the least bit amused. Her face turned sour.

“Ya’re horrible, Phai-Phai. Cheatin’ on me with Itty-Bitty.”

“Be glad no one was around to hear that. They might get the wrong idea.”

Their friendly banter went on for a few more moments, when suddenly—

The building shook enough to make their bodies lurch. They froze in place.

“Kinda boring, if y’ask me…Been happenin’ a lot recently, though, these earthquakes.”

The water left in the glasses next to their plates rippled.

This particular quake was small enough to only be noticed by those sitting still. Most likely, the people outside it hadn’t felt a thing.

Loki and Hephaistos sat silently as the rumbling continued.

“If these were just the normal earthquakes, we’d shut ’em up in no time…But there’s this dangerous thingy right below our feet…What’cha think, Phai-Phai?”

“The Guild is constantly sending up prayers, so I think it’s just a coincidence…But yes, it feels like something is about to happen.”

The two deities looked out the window. The people below were going about their business as usual. If anything, the city streets looked busier than when they arrived.

“Huh?” uttered Loki as her eyes happened to catch something interesting in the backdrop.

Members of a certain
Familia
were gathering at a corner down the road.

The god Takemikazuchi cast his gaze to the ground at his feet.

He narrowed his eyebrows in thought as he felt vibrations shake the soles of his shoes.

“Lord Takemikazuchi, we shall return.”

The deity lifted his eyes from the ground in response to a spirited, high-pitched voice.

A beautiful young girl stood before him. Long, shiny black hair framed a face with bluish-purple eyes. Her back was perfectly straight in a sign of respect.

What little skin was showing from beneath thick lavender battle clothes was a smooth, almost milky white. Her face had such perfect symmetry that she could have been mistaken for a goddess herself.

A loving smile grew on Takemikazuchi’s face as he looked at the girl, a member of his own “family.”

“Yes, but don’t push yourself too hard, Mikoto. I always say this, but never forget how you felt on your first day as an adventurer.”

After the girl named Mikoto gave a curt nod, he looked around to face the other members of the unit. “The same goes for all of you,” he said.

The small battle party consisted only of humans.

Including Mikoto, the group of six made up the entirety of
Takemikazuchi Familia
.

Takemikazuchi Familia
was just one of many Dungeon-crawling
Familias
in Orario. Just as the name states, they made a living collecting drop items and magic stones from the Dungeon and selling them for profit.

Rumors of a promising rookie had been spreading through the ranks of lower-level adventurers. Now that Mikoto had leveled up,
Takemikazuchi Familia
had become relatively strong for a lower-ranking
Familia
.

“We should be on our way, Lord Takemikazuchi,” came the voice of the male leader of the group.

“Indeed. Best of luck to you all,” he answered as he saw them off.

Mikoto gave another bow before turning to join the others.

“And don’t come back without everyone…”

Takemikazuchi watched their forms disappear into the distance and looked down at his feet again.

A few moments passed before he lightly sighed as he scratched his head.

Turning on his heel, the deity rolled his shoulders and cracked his neck. He wanted to help his family in any way he could, so today he would once again be making fried potato puffs. “Still losing in sales to Hestia’s place up north…” he mumbled to himself as he turned back to his
Familia
’s home, just a few paces away, to get ready.

Takemikazuchi froze with his outstretched hand just above the door handle.

The bright, cheerful voice coming from behind him sent shivers down his spine. His eyes shook as they darted from side to side.

Takemikazuchi knew who it was all too well. He practically flung his body around to face the owner of the voice.

“Yes, it is I, Hermes! Been about a week, hasn’t it, Takemikazuchi?”

Just as he expected, a rather slender god was coming toward him.

This new deity was of medium height, his skinny arms and legs sticking out of his traveler’s clothes as he approached. Being a god, Hermes’s features lined up so well that no one would be able to find a flaw. He reached up and pulled off his winged, broad-brimmed hat to reveal flowing locks of orange hair.

His effeminate looks and overwhelming charm were the complete opposite of Takemikazuchi’s masculine refinement.

Smiling from ear to ear, Hermes started twirling his hat on his finger as he walked all the way up to the other god.

“Aw, don’t look at me with that angry face. And I came all this way just to talk to you too, Takemikazuchi!”

“Don’t say such things, even as a joke! Aren’t you the one who leads all those other idiots in making my life miserable?!”

“Ha-ha-ha, sorry, sorry! I just can’t help teasing you when I see you, Takemikazuchi!”

Hermes’s insolent tone did nothing to brighten Takemikazuchi’s mood. The god’s face was turning bitterer by the second.

Every god has one or two quirks about them, but Hermes took the cake when it came to wild behavior.

In fact, Hermes routinely left his
Familia
’s home, the one place he had any influence in Orario, to travel around the world. Takemikazuchi wasn’t sure if Hermes was just a born traveler or if he just couldn’t stand being in the same place for a long time, but he did know that the deity had never stayed in the same place for more than half a year. It went without saying that
Hermes Familia
was an autonomous group run by its members—who were completely left to their own devices.

“I just came back into town and happened to pass by, so I thought
I’d stop in and congratulate you…Congrats on little Mikoto’s leveling up, Takemikazuchi. Your
Familia
has gotten quite a bit stronger. We’ll have to do business in the future.”

Whether in the heavens or on the earth, Hermes had always been extremely good at positioning himself to succeed.

Such diligence is the key to not making enemies
, Takemikazuchi thought to himself.

Hermes extended his hand, but Takemikazuchi didn’t reciprocate the offer right away.

“Hermes…why are you back so soon?”

After participating in the last Denatus, Hermes had packed his bags and headed out for parts unknown. Usually once he left the city, he wouldn’t be back for a month at the very least.

But this trip lasted only ten days. It was by far his shortest.

Takemikazuchi didn’t try to hide the suspicion on his face. Hermes paused for a moment before smiling once again.

“Heh-heh, what with all the interesting rookies taking the stage, you can’t blame me for being curious about them. So I took care of some things and came back a little early.

“Hestia’s ‘Little Rookie.’ With him being the new record holder, I’m sure I’m not the only one interested in the boy.”

Hermes’s narrow eyes opened just a little bit wider as he flashed even more teeth in a confident smile.

Takemikazuchi frowned as the charming god revealed his true intentions.

“Takemikazuchi, you see Hestia quite a bit, yes? Do you happen to know anything about one Bell Cranell?”

Hermes squeezed his shoulder blades together, thrusting his head forward as if he were trying to peer into Takemikazuchi’s face. At long last, he took a few steps back with that charismatic smile still plastered on his lips.

A sudden gust of wind came out of the west, their hair dancing in the sudden breeze.

Hermes broke off eye contact from the other god’s sidelong glance and looked up toward the sky as if guided by the wind.