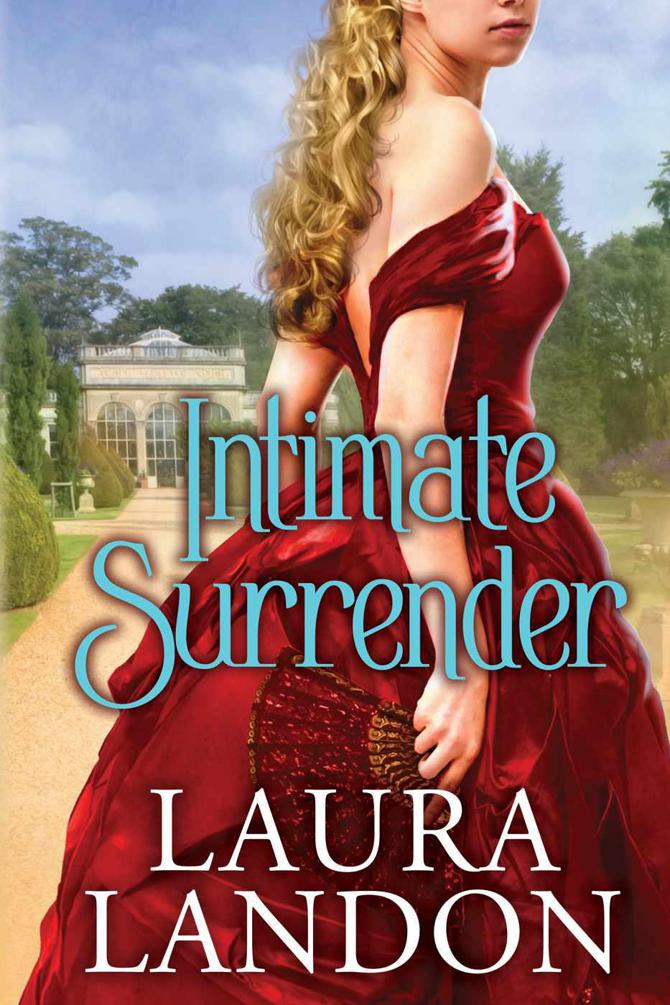 Text copyright © 2013 Laura Landon
All rights reserved.
No part of this book may be reproduced, or stored in a retrieval system, or transmitted in any form or by any means, electronic, mechanical, photocopying, recording, or otherwise, without express written permission of the publisher.

There can be no greater honor than to dedicate this book to my loyal readers.

H
annah tried to move, but stabbing shards of burning pain raged from the core of her being. She winced, then pressed her fist low to her belly and sank back into the straw.

For several agonizing moments she did nothing but struggle to take enough air to breathe. This must be what it felt like to die.

She inched her spread legs closer together and cried out when spikes of fiery pain shot through her. She couldn’t lie here so…exposed.

Scorching tears streamed from her eyes only to get lost in the straw beneath her. The despicable things the man had done to her and the revolting ugliness of his intrusion clung mercilessly to her.

Humiliation consumed her, and she recoiled from the shame.

Terror paralyzed her when she thought of her father’s reaction if he ever discovered how she’d been defiled.

She shifted in the dirty straw. She couldn’t let him find out. The beating she’d receive if he did would be worse than any thrashing he’d given her before.

She rolled to her side and clasped her hand over her mouth to keep from casting up the little she’d eaten earlier.
She was desperate to flee from the place where the man had groped and clawed at her, but a rush of burning pain shot through her when she tried to rise.

She hugged her arms around her middle and squeezed her eyes tightly shut. Every inch of her screamed in pain. Over and over she prayed that no one would ever find out what had happened, that she could pretend to the world she was still pure. That when she woke in the morning she’d be safe in her own bed instead of curled up in the corner of a dirty stall in the horse barn. But even if by some miracle that were possible, his atrocious actions would always haunt her. She would never forget what he’d done to her.

She could still feel his hands on her body, touching her in places no one had ever touched her before. She could still smell the sour liquor on his foul breath when he kissed her, when his filthy mouth sucked at her breasts, and she still felt the burning of his whiskers against her tender flesh. Every inch of her throbbed—every muscle screamed in pain. Her flesh was bruised and sore where he’d pawed at her, mauled her, pushed into her.

She wanted to cry to the heavens for the reprehensible acts he’d committed against her, but she was unable to utter more than a raspy moan. Her voice was hoarse from her pleading cries for him to stop. But he had not. He’d touched her in the vilest manner. His large, brutish hands had clutched at her with unrelenting force.

With trembling fingers, she pulled the shredded material of her dress to cover her breasts. She knew what he’d done to her had been a sin. Her father had repeatedly warned her about the sins of the flesh. Over and over her father had demanded her promise not to allow any man to
touch her. But she hadn’t been able to stop the man tonight. He’d been too strong, too determined. Even her screams hadn’t been loud enough to summon anyone to help her.

She tugged at the hem of her gown wrapped around her waist. With wild fury, he’d pushed it there before he’d…

Hannah cried out in agonizing mortification. A man she didn’t know had violated her, had invaded her body, had raped her. The way he’d stroked her and fondled her had been a filthy and disgusting act. Her unyielding flesh had rebelled when he’d entered her as if he’d torn her in two.

Hannah struggled again to move, but another brutal stabbing of pain shot through her.

She lay still a while longer, then attempted to stand. She had to escape before her father discovered her. He’d never believe that what the man had done hadn’t been her fault. He’d always warned her of the sins of the flesh. The sins a
woman
caused a man to commit.

Hannah rolled to her side and looked down. Blood—so much blood.
Her
blood.

A pool of crimson still streamed from inside her, turning the straw beneath her an earthen black.

She tried to distance herself from the convicting evidence that proved she’d been violated, but stopped when the door burst open and her father stormed into the barn. There was a crazed look in his eyes, a murderous expression on his face.

The roar of his accusation caused the animals still in their stalls to shift uncomfortably. Hannah used the little strength she had to push away from him as he shot toward her.

“I told Brother Jasper he was wrong! That my daughter would
never
behave so wantonly. But he laughed in my face. Laughed!”

“Liar! Brother Jasper told me what you did. How you flaunted yourself, letting him glimpse your breasts.”

“Don’t deny it! I know you! You’re the daughter of Satan. I’ve always known it but prayed I could save your wretched soul if I kept you on your knees in prayer. But I’ve failed. Even God doesn’t want you. He knows what you are. A whore!”

“Quiet! You used your beauty to tempt a righteous man. The same as Eve tempted Adam. Brother Jasper told me how you paraded your body like a Jezebel before him. How you tempted him until he could not resist.”

“You did! Brother Jasper lay prostrate at my feet to ask forgiveness for his weakness. He admitted all to me and the other brethren and begged for us to intercede for him in asking forgiveness.”

Hannah shook her head. She knew words were useless, knew her father’s rage was so intense he’d never listen to her, never believe her.

“How could you have disgraced me so? You’re more wicked and shameless than any of Satan’s strumpets!”

Hannah curled her body into a tight ball as the sting of the leather flayed her back and her buttocks. Her denials went unheard. Her pleas for her father to stop the beating went unheeded.

With each slash of the strap, she succumbed to the pain. Eventually, the little strength that remained left her, and she prayed that when she lost consciousness she’d never wake again.

A blessed numbness settled over her. And she fell into darkness.

She wasn’t dead. She’d prayed that she wouldn’t wake, or that when she did, she would be in heaven. But when she opened her eyes, she was still alive, and condemned to the living hell to which the righteous liar had committed her for the rest of her life.

She was weak from the blood she’d lost, with her body bruised and battered.

In time, she woke enough to take in her surroundings. She was no longer in the barn or anywhere near the house. Someone had carried her down the long lane that led to where her father’s land bordered the Earl of Portsmont’s estate—where her best friend Grace lived. They’d dumped her body there and left her to die.

Her father’s intent was clear—she was no longer welcome in his home. He no longer considered her his daughter. To him, she was already dead.

She slowly rose to her feet and walked to a nearby stream. She stepped into the shallow water and scrubbed away as much of the filth and humiliation as she could from her battered body. But she was unable to scrub away the shame of what the man had done to her—a man of the cloth. A man who claimed to represent God. A man who preached redemption to the lost.