Read Inspector O 04 - The Man with the Baltic Stare Online

Inspector O 04 - The Man with the Baltic Stare 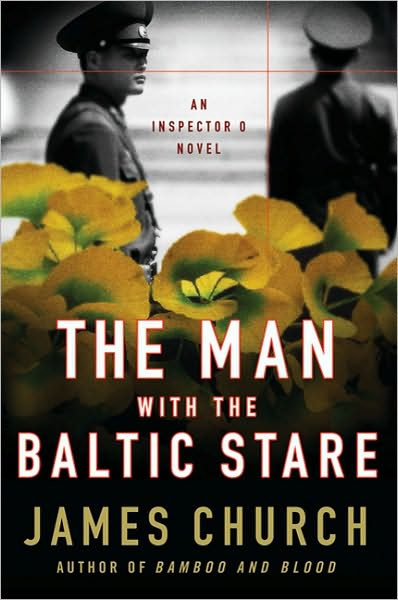 THE MAN WITH THE BALTIC STARE

A Corpse in the Koryo

THE MAN WITH THE BALTIC STARE

The man with the Baltic stare / James Church.—1st ed.

Thanks to Mike Chinoy, whose insistence and enthusiasm finally convinced me that Macau was a perfect setting for Inspector O. Thanks to Joji for providing a wonderful, quiet place to write and reflect. Thanks to John and Jackie for reasons too numerous to mention.

Apologies to hotel front desk clerks, who are badly treated as a group in these stories. In life, almost all of them are kind, eager to help, and well informed. Apologies, too, to my sister, for not acknowledging sooner that she has been a wonderful first editor always correcting my many missteps and awkward prose with graceful encouragement.

Some acknowledgments, as always, must remain unspoken. They are no less heartfelt for being wrapped in silence.

When I started the series, I knew there was much I did not understand about North Korea and its people; little did I realize how much. I thought there was always more for the heart to learn. Now I know there is not much time in which to do it.

PART I
Chapter One

When the engine died, the silence of the mountain climbed down from the tall trees. Nothing stirred, no buzz of insects, no breeze to break the afternoon heat rising from the valley below. The car, parked on the far edge of the clearing, tilted slightly to the east. From there the land fell away, gently at first and then more steeply, the thin cover of soil giving way to a few steps of smooth, bare rock before it vanished into seven hundred meters of untroubled air.

It wasn’t a surprise, seeing the car. I hadn’t expected them on any particular day, but it was always clear they would show up. Even if there had been some way to avoid them this time, some way to open a door to the past, I wouldn’t have tried. Sooner or later everything was meant to lead to here. I could reconstruct all I’d ever said, redo all I’d ever done, but it would only lead back to this moment, looking out at that car. Maybe this was as good a time as any. It was autumn, and autumn marked the spiral down.

I watched from the window, waiting to see how the process would unfold. They would do it by the book, I felt sure, no surprises. That was how these things were done.

The telephone rang. I picked up the receiver.

“Who is this?” We had never done this sort of thing, called before we went to pick someone up. It always led to fretting.

“Worry with that later. I repeat, don’t go outside.”

When I went back to the window, there were two of them, leaning against the car, their jackets off in the stifling air. People forget that on a mountaintop in October, it can still be so hot. The one on the left, the driver, looked toward the trees when he saw me. The other one said something out of the corner of his mouth; then he stuck his chin out and stared straight ahead. After a while, he shook his head, and they went away. Odd, I thought to myself. Not the way we used to do it.

A week later, the phone rang again. The wind had been blowing hard all day, but now it stopped abruptly, so it seemed even more quiet than usual, the way an autumn afternoon can get when the year has nothing left to say. Late afternoon quiet, late afternoon light; you could blow your brains out at that time of day in October and nothing would happen. Everything died in autumn. The afternoon wouldn’t notice.

“They’ll be at your place in a few minutes.”

It was the same voice. This was annoying, this abrupt familiarity. “You have a wrong number again.”

“Yeah, must be. I’m just dialing at random, making obscure comments to pass the time.”

“Do we know each other? I don’t recognize the voice. You called before, right? Maybe we should introduce ourselves, if this is going to get regular.”

“That’s fine. Listen, this time when they drive up, you go out to meet them.”

“There’s no interest in your preferences, comrade. Put on a
coat and tie, and be outside when they pull up. The whole thing won’t take very long. You’ll be back in time to fix dinner and to sand wood far into the night.”

I hung up. Even if the driver was suicidal, he couldn’t get to Pyongyang and back in time for dinner. He probably couldn’t even do it the same day. It didn’t matter—I wasn’t putting on a tie.

As I closed the door behind me and walked out to the car, I could see that this time there was no “they.” The driver was by himself, sitting in the front seat, staring out the front windshield. It wasn’t even the same driver who had been here the week before. From the side, he had the pointed face of a ferret. When he turned toward me, I could see he was very nervous around the eyes. His lips were jumpy as well. I thought about sitting in the back, but that would have looked strange—me in back as if a car and driver had been sent for my convenience. With a two-man team, there wouldn’t have been a question about where I sat. That made sense; it’s one reason why we always sent a team. We gave some thought to these things. It was never simply routine. Before we left, we’d sit in my office and go over what to say, how to handle questions, how to keep things from getting out of hand. It wasn’t easy, bringing people in. They were upset. Some of them stared out the window, thinking about their lives, but quite a few babbled, pleaded, made offers if we would only pull over and let them go. We did what we could to calm them down. We never copied SSD’s approach, though. SSD liked to make them show up voluntarily. They’d call and tell so-and-so to show up at thus-and-such address at ten in the morning. They thought it was a good way to break people’s spirits, making them drag themselves in. Maybe that was more honest, in a way. Even if it was, that wasn’t why SSD did it.

“I don’t know anything, and I’ll recognize less after all these years,” I said as I opened the passenger side door. “I don’t even
want to try. Leave me alone. Tell them I went away and wasn’t around when you got here.”

The driver’s hands shook. He gripped the steering wheel to make them stop. “Not possible. You can’t stay out of what’s happening. Anyway, it will only be this once. You have the memory, the bridge that goes across the—”

He glanced quickly in my direction.

“I’m older than my grandfather was when he died. What do they want with me anymore?”

“Get in the car. Tell them yourself. I’m tired of arguing with people.”

It took thirty minutes down the winding road to the floor of the valley, past the shack with the covered porch where the guards sat on their haunches and watched the flowers grow alongside the fields. When we got to the river, I told the driver to turn around and go back.

“Either we go back or I get out right here.”

It took another half hour, past the guard shack again, up the winding road to my house. I went inside and took my time going through the box of wood chips. I already knew the choices were limited. Pine, oak, and chestnut—not an ideal mix under the circumstances. Something—some part of the ancient brain—warned me to keep looking. I rooted around for whatever could cope with complexity or anxiety, or both. Pine was too simple-minded; oak and chestnut were both stubborn in their own way. I remembered a piece of larch, a very calm tree, leaning against the back wall and was thinking of cutting off a couple of chips when a horn sounded, four impatient blasts. Back in the car, the
driver was annoyed, eyes blinking furiously like a ferret that has been told it is not an ox.