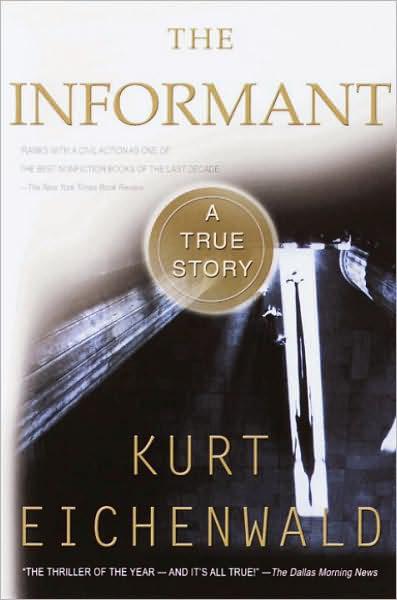 NOTHING SIMPLE IS SIMPLE

“READS LIKE AN ED McBAIN CRIME NOVEL . . .  within a few pages the reader is hooked. I knew how the story ended, but I still couldn’t put the book down.’’

“A REMARKABLE, FASCINATING AND FAST-PACED BOOK . . .  The strange details that emerge would be laughable in the context of a novel. In
The Informant
, they just leave a reader breathlessly amazed.’’

“I WOULD SAY
THE INFORMANT
READS LIKE GRISHAM, ONLY NOBODY EVER COULD HAVE INVENTED THESE CHARACTERS. A tale this riveting and this strange could only have been built from truth.”

“SUSPENSEFUL . . .  a book that can double as an attractive movie proposal.”

“A GRIPPING READ . . .  ONE OF THE MOST COMPELLING BUSINESS NARRATIVES SINCE
BARBARIANS AT THE GATE
.
The Informant
offers an inside picture of a part of the corporate world that outsiders almost never see—one full of covert meetings, secret codes, and industrial espionage. Usually the pulp of airport fiction, here such shadowy doings become the stuff of sound investigative nonfiction . . .  A great cops-and-robbers drama—leavened by occasional touches of screwball comedy . . .  This is box-office material, and Eichenwald has written a book that reads a lot like a screenplay.”

“A THRILLER, filled with espionage, double-crosses, and deceit, where nothing is quite what it first seems.’’

“A COMPELLING NARRATIVE . . .  a business book for Grisham readers.’’

“A FASCINATING TALE . . .  a cohesive narrative of a corporation that placed itself above the law, an ambitious executive who preferred lies over the truth, and determined FBI agents whose hard work was nearly jeopardized not only by their informant but also by their bosses at the Department of Justice.’’

“
THE INFORMANT
IS SUPERB REPORTING in the service of a great story, one with the drama and suspense of a Le Carré novel. Set squarely in the American heartland, delving into the inner sanctum of a global corporation, it explores the shifting boundaries of truth and deception, loyalty and betrayal. It is a remarkable achievement.”

—James B. Stewart, author,
Den of Thieves
and
Blind Eye

“WHAT A STORY—AND WHAT AN INFORMANT.’’

“IN THIS TRUE ACCOUNT THAT HAS MORE SPY ACTION THAN SOME TOM CLANCY NOVELS, we get double-crossing, dirty dealing, lying, conniving, and wiretapping . . .
The Informant
is more deceitful and more spellbinding than many works of fiction.”

“THIS GRIPPING STORY of the price-fixing case against Archer Daniels Midland is the next
A Civil Action
.’’

“THE INFORMANT IS EPIC IN SCOPE, a tale of human foibles—of greed, deceit, and arrogance—and also of the search for truth. Eichenwald has told it masterfully, with the narrative drive of a novel.”

“LIKE EVERYONE ELSE WHO HAS RAVED about
The Informant
, I could not stop reading it . . .  Like John Grisham’s
The Firm
,
The Informant
is destined for the big screen . . ”

“THE TWISTS AND TURNS OF THIS NONFICTION WORK LEAVE MANY THRILLERS IN THE DUST. Eichenwald’s spare prose and journalistic eye for detail make the pages fly.”

— Liz Smith, in her syndicated column

“A COHESIVE, JAW-DROPPING NARRATIVE . . .  a compulsively readable legal procedural,
The Informant
has earned comparisons to the works of John Grisham. But with its dizzying array of subplots, twists, and political maneuvers, the book is more like Grisham’s entire oeuvre compressed into six hundred pages.”

“CRITICS ARE THRILLED with this revival of a genre they claim has been all but dead since the early ‘80s: investigative nonfiction set in corporate America. By all accounts, Eichenwald’s tale of the Archer Daniels Midland price-fixing scandal, which he covered for the
New York Times
, is a gripping read.’’

“
THE INFORMANT
IS MASTERFUL . . .  a suspenseful, engrossing story . . .  were this story told as fiction, no one would believe it.

“A TERRIFIC BOOK . . .  a transfixing tale . . .  mesmerizes you immediately with a well-crafted filigree of detail . . .  the book resembles a tightly constructed novel. It’s full of parallel plots that develop independently, occasionally crisscrossing or passing in the night until the inexorable collision.”

To
ADAM, RYAN,
and
SAM,
my wonderful and beloved boys.

And to my wife,
THERESA,
Always.

You too must not count overmuch

on your reality as you feel it today,

it may prove to be an illusion tomorrow.

Six Characters in Search of an Author

This book is based on about eight hundred hours of interviews with more than one hundred participants in these events, as well as tens of thousands of confidential corporate and government records, including secret grand jury testimony. Much of the dialogue comes from publicly unavailable transcripts of secret recordings made by a cooperating witness with the FBI over more than two years. Other conversations are based on contemporaneous records of the events or the best recollections of participants. While I have disguised the identities of one witness and of some people mentioned in passing on the tapes, everything else in this book—no matter how unbelievable—is real.

Every scene, every name, every crime.

WITH THE ARCHER DANIELS MIDLAND COMPANY

HOWARD BUFFETT,
assistant to the chairman

IN THE BIOPRODUCTS DIVISION

ON THE SPECIAL COMMITTEE OF THE BOARD

WITH THE FEDERAL BUREAU OF INVESTIGATION, WASHINGTON, D.C.

WITH THE RESIDENT AGENCY, DECATUR, IL

WITH THE RESIDENT AGENCY, CHAMPAIGN, IL

WITH THE FIELD OFFICE, SPRINGFIELD, IL

WITH THE FIELD OFFICE, CHICAGO, IL

WITH THE FIELD OFFICE, MOBILE, AL

WITH THE UNITED STATES DEPARTMENT OF JUSTICE, WASHINGTON, D.C.

IN THE ANTITRUST DIVISION, WASHINGTON, D.C.

Sweet Addiction by Daniels, Jessica
Marion Zimmer Bradley's Sword of Avalon by Diana L. Paxson
Holding Their Own: The Salt War by Joe Nobody
The New Kid by Mavis Jukes
Paranormal Investigations: No Situation Too Strange by EH Walter
Something About Joe by Kandy Shepherd
Positively Mine by Christine Duval
The Boy from Aleppo Who Painted the War by Sumia Sukkar
Essential Facts on the Go: Internal Medicine by Lauren Stern, Vijay Lapsia
The Insane Train by Sheldon Russell