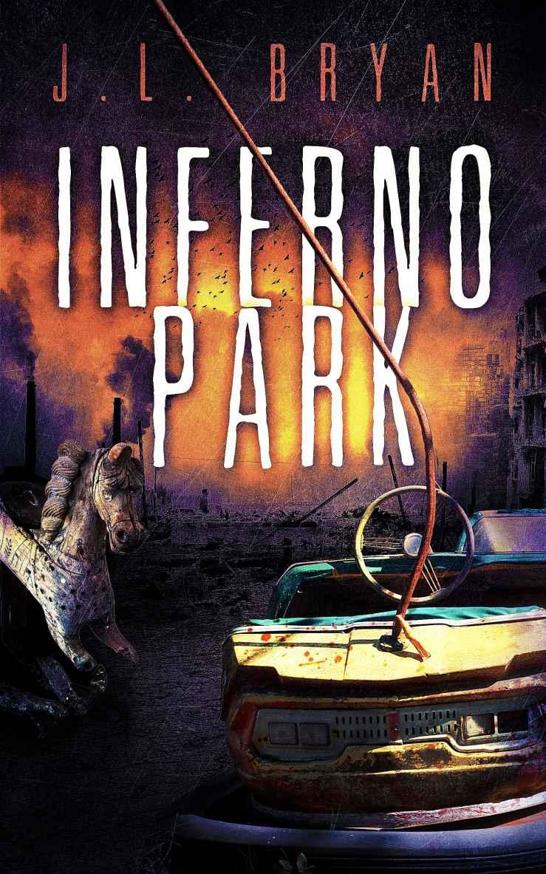 Other books by J. L. Bryan

This book or any portion thereof may not be reproduced or used in any manner whatsoever without the express written permission of the publisher except for the use of brief quotations in a book review.

All characters appearing in this work are fictitious. Any resemblance to real persons, living or dead, is purely coincidental.

The Songs of Magic Series (YA/Fantasy)

When I was a child, our family vacations usually involved visiting beachside resorts like Hilton Head, South Carolina and Panama City Beach, Florida. We also traveled to tourist traps like Weeki Wachee Springs, best known for its mermaids and water slides. I also never missed a state fair if I could help it.

These childhood memories inspired
Inferno Park
. Particularly worth mentioning is the old Miracle Strip Amusement Park in Panama City Beach, which opened in 1963, closed in 2004, and was finally demolished in 2010. Looking at pictures of the old park lying in ruins stirred me to write this book, though inspiration is also drawn from other parks and carnivals of my childhood. For me, this novel is an expression of childhood loss and the pain of growing up and dealing with loss. (Don’t worry, there are also ghosts and monsters!)

Of particular note is the “Old House” that stood in Miracle Strip Amusement Park. It was a maze of a haunted house—you had to find your way through secret doors and hidden panels. This strongly influenced the Jenny Pox series, readers of which will remember the maze-like third floor of Barrett House, as well as the major role of haunted-house attractions in the first and fourth books.

The Old House was created by an artist named Vincent “Val” Valentine, who built a number of haunted houses around the country, including one at The Dells in Wisconsin and the Mystery Mansion in Gatlinburg, Tennessee (which is still open!). Val Valentine also created amusement attractions around Ocala and Panama City Beach in Florida, as well as around the country, but he’s most famous for his haunted houses.

I was fortunate enough to meet with Val Valentine during the course of writing this book, and he was generous enough to sit down and show me his decades of work that had shaped roadside America. I was excited and grateful to meet the individual who had created so much of the lost geography of my childhood.

This is a story that comes from the deepest chambers of my heart and soul. I hope you enjoy it.

This book took much longer to write and revise than usual. I appreciate most of all the patience of my wife and son while I spend so much of my time writing.

For editing and beta reading, I’m grateful to Vicki Keire, Robert J. Duperre, Daniel Arenson, and Michelle Muto, as well as my wife, who read this book multiple times. The cover art is by Damonza.com.

I’m also grateful to pop culture historian Tim Hollis, whose books helped me recall lost details of my own childhood and filled me in on the deeper history of Gulf Coast tourist resorts. His books
Dixie Before Disney: 100 Years of Roadside Fun
and
Florida’s Miracle Strip: From Redneck Riviera to Emerald Coast
were of particular importance.

In addition, Mr. Hollis put me in touch with Vincent “Val” Valentine, the artist who designed so many lost attractions that I remember from childhood (particularly his award-winning haunted houses). I am deeply grateful to Mr. Valentine himself for spending several hours showing me scrapbooks of his life’s work. The child in me was thrilled to learn the backstory of these major roadside attractions of yesteryear.

I also must thank all the book bloggers who’d supported my career for years, including Danny, Heather, and Heather from Bewitched Bookworks; Mandy from I Read Indie; Michelle from Much Loved Books; Shirley from Creative Deeds; Katie and Krisha from Inkk Reviews; Lori from Contagious Reads; Heather from Buried in Books; Kristina from Ladybug Storytime; Chandra from Unabridged Bookshelf; Kelly from Reading the Paranormal; AimeeKay from Reviews from My First Reads Shelf and Melissa from as Books and Things; Kristin from Blood, Sweat, and Books; Lauren from Lose Time Reading; Kat from Aussie Zombie; Andra from Unabridged Andralyn; Jennifer from A Tale of Many Reviews; Giselle from Xpresso Reads; Ashley from Bookish Brunette; Loretta from Between the Pages; Ashley from Bibliophile’s Corner; Lili from Lili Lost in a Book; Line from Moonstar’s Fantasy World; Lindsay from The Violet Hour; Rebecca from Bending the Spine; Holly from Geek Glitter; Louise from Nerdette Reviews; Isalys from Book Soulmates; Jennifer from The Feminist Fairy; Heidi from Rainy Day Ramblings; Kristilyn from Reading in Winter; Kelsey from Kelsey’s Cluttered Bookshelf; Lizzy from Lizzy’s Dark Fiction; Shanon from Escaping with Fiction; Savannah from Books with Bite; Tara from Basically Books; and everyone else I missed!

For all my friends lost to age and time

On the day of the Starland Amusement Park disaster, the one that would send the minor resort town of Conch Beach into its slow death spiral and destroy his family, Carter was only a week away from his twelfth birthday.

The day of the horror was beautiful, with bright blue skies glowing high above the sugar-white beach, the tourists crowding the sidewalks. They snapped pictures of one another in their swimsuits and bought frozen lemonade and airbrushed shirts from the brightly colored shanties along Beachview Drive. It was a day when all the doors and windows in town stood open to catch the sweet breeze off the ocean.

If the sidewalks, snack shacks, and video arcades were a bit less crowded with tourists than they’d been five or ten years earlier, it was much too nice of a day to grumble about it.

“Can I go yet?” Carter asked his dad. They stood by the go-kart course at seven in the evening, watching tourist kids fly past in the roaring vehicles, zooming around curves and over the single bridge. The course was a simple figure-eight shape, which had inspired Carter’s parents to name it the Eight-Track. Led Zeppelin’s “Dancing Days” blasted over the outdoor speakers, even louder than the dozen go-kart engines.

“You sweep up the shop?” his dad asked. His arms were crossed over his tie-dyed “Eight-Track Racing Course” shirt—tourists could buy their very own tie-dyed Eight-Track shirts inside the front shop for a mere twenty-five bucks each. His dad’s shoulder-length hair blew in the gasoline breeze from the engines, his mouth a serious flat line under his sunglasses.

“Yeah, I swept and dusted!” Carter said, impatient to slip out of work and have fun.

“Yeah, yeah! I did everything. Jared’s probably already out front. It’s his first day off grounding. Can I
please
go?”

Carter’s dad rubbed his chin as though deep in thought, but a hint of a smile was forming on his lips. He was toying with Carter.

“I don’t know...we could get hit with a lot of business,” he said. “It might not be responsible for you to wander off.”

“It hasn’t been
that
busy this summer,” Carter said. It was unfortunately true, and the comment chased the playful smile from his dad’s face.

“Why was Jared grounded, again?” his dad asked.

“He egged his sister during her birthday,” Carter said. “But she totally deserved it for being such a b...uh...” Carter stopped himself.

“A what?” His dad’s eyebrows raised behind his sunglasses. “What word beginning with ‘b’ were you about to say?”

“For being mean.” Carter shrugged. “She’s always mean to him, and me, too. Can I
please
go now?”

“And where are you going?”

“The beach. Maybe down the Starwalk,” Carter told him. Where else was there to go in town?

According to the town’s tourism brochures, the “Starwalk” referred to the long stretch of Beachview Drive just across the road from the motel-lined beach, a brightly lit row of attractions anchored by the enormous Starland Amusement Park.

Sprawling out in both directions from the amusement park’s high fences lay a wonderland of gaudily painted businesses jammed close together on the precious real estate—miniature golf and go-kart courses (including the Eight-Track itself, owned and operated by Carter’s parents), plus skee ball, an arcade, foods stands offering ice cream and greasy hamburgers, and junk shops that sold cheap souvenirs, postcards, and sandals that would fall apart after a week, just about the time the tourists who bought them returned home. All of these little spots fed off the tourist traffic drawn by the motels and the big amusement park.

Carter’s dad pretended to ponder Carter’s question, and then jogged over to meet a couple of tourists pulling their go-karts back into the yellow-striped starting lane. One of the kart-driving tourists was a fat kid, nine or ten years old, in a cheap yellow sun visor hat with the Starland Amusement Park logo, and the other was the kid’s father, also obese, in a camouflage-print Tennessee Volunteers hat.

Patient Mates: (Book 7 Grey Wolf Pack Romance Novellas) by Price, E A
Gravel (MC Biker Romance) by Tell, Alicia
Screw Cupid by Arianna Hart
The Principal's Office by Jasmine Haynes
Blameless in Abaddon by James Morrow
Patch Up by Witter, Stephanie
Hidden in Shadow Pines by Nancy Roe
Anything Goes on a Friday Night by Sara Daniell
Collection 1986 - Night Over The Solomons (v5.0) by Louis L'Amour
In Full Bloom: Sequel to 'The Crying Rose': The Trilogy of the Rose (Volume 2) by Beers, B. A.