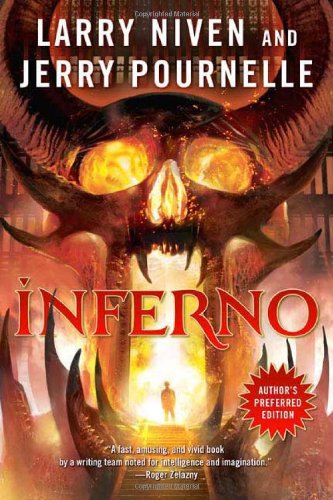 SUMMARY:
After being thrown out the window of his luxury apartment, science fiction writer Allen Carpentier wakes to find himself at the gates of hell. Feeling he's landed in a great opportunity for a book, he attempts to follow Dante's road map. Determined to meet Satan himself, Carpentier treks through the Nine Layers of Hell led by Benito Mussolini, and encounters countless mental and physical tortures. As he struggles to escape, he's taken through new, puzzling, and outlandish versions of sin--recast for the present day.

SUMMARY:
After being thrown out the window of his luxury apartment, science fiction writer Allen Carpentier wakes to find himself at the gates of hell. Feeling he's landed in a great opportunity for a book, he attempts to follow Dante's road map. Determined to meet Satan himself, Carpentier treks through the Nine Layers of Hell led by Benito Mussolini, and encounters countless mental and physical tortures. As he struggles to escape, he's taken through new, puzzling, and outlandish versions of sin--recast for the present day.

Playgrounds of the Mind

The Descent of Anansi

WITH JERRY POURNELLE
AND STEVEN BARNES

The Legacy of Heorot

Inferno
was originally published in 1976 by Pocket Books in a substantially different form.

thought about being dead.

I could remember every silly detail of that silly last performance. I was dead at the end of it. But how could I think about being dead if I had died?

I thought about that, too, after I stopped having hysterics. There was plenty of time to think.

Call me Allen Carpentier. It’s the name I wrote under, and someone will remember it. I was one of the best-known science-fiction writers in the world, and I had a lot of fans. My stories weren’t the kind that win awards, but they entertained and I had written a lot of them. The fans all knew me. Someone ought to remember me.

It was the fans who killed me. At least, they let me do it. It’s an old game. At science-fiction conventions the fans try to get their favorite author washed-out stinking drunk. Then they can go home and tell stories about how Allen Carpentier really tied one on and they were right there to see it. They add to the stories until legends are built around what writers do at conventions. It’s all in fun. They really like me, and I like them.

I think I do. But the fans vote the Hugo Awards, and you have to be popular to win. I’d been nominated five times for awards and never won one, and I was out to make friends that year. Instead of hiding in a back booth with other writers I was at a fan party, drinking with a roomful of short ugly kids with pimples, tall serious Harvard types, girls with long stringy hair, half-pretty girls half-dressed to show it, and damn few people with good manners.

Remember the drinking party in
War and Peace
? Where one of the characters bets he can sit on a window ledge and drink a whole bottle of rum without touching the sides? I made the same bet.

The convention hotel was a big one, and the room was eight stories up. I climbed out and sat with my feet dangling against the smooth stone building. The smog had blown away, and Los Angeles was beautiful. Even with the energy shortage there were lights everywhere, moving rivers of lights on the freeways, blue glows from swimming pools near the hotel, a grid of light stretching out as far as I could see. Somewhere out there fireworks arched up and drifted down, but I don’t know what they were celebrating.

They handed me the rum. “You’re a real sport, Allen,” said a middle-aged adolescent. He had acne and halitosis, but he published one of the biggest science-fiction newsletters around. He wouldn’t have known a literary reference if it bit him on the nose. “Hey, that’s a long way down.”

“Right. Beautiful night, isn’t it? Arcturus up there, see it? Star with the largest proper motion. Moved a couple of degrees in the last three thousand years. Almost races along.”

Carpentier’s trivial last words: a meaningless lecture to people who not only knew it already, but had read it in my own work. I took the rum and tilted my head back to drink.

It was like drinking flaming battery acid. There was no pleasure in it. I’d regret this tomorrow. But the fans began to shout behind me, and that made me feel good until I saw why. Asimov had come in. Asimov wrote science articles and histories and straight novels and commentaries on the Bible and Byron and Shakespeare, and he turned out more material in a year than anyone else writes in a lifetime. I used to steal data and ideas from his columns. The fans were shouting for him, while I risked my neck to give them the biggest performance of all the drunken conventions of Allen Carpentier.

The bottle was half empty when my gag reflex cut in and spilled used rum into my nose and sinuses. I jackknifed forward to cough it out of my lungs and pitched right over.

I don’t think anyone saw me fall.

The city was still alive with lights. A big Roman candle burst with brilliant pinpoints of yellows and greens against the starry skies. The view was pleasant as I floated down the side of the hotel.

It seemed to take a long time to get to the bottom.

I was, but I wasn’t. I thought I could see, but there was only a bright uniform metallic color of bronze. Sometimes there were faint sounds, but they didn’t mean anything. And when I looked down, I couldn’t see myself.

I couldn’t touch anything, not even myself. I couldn’t feel anything, or see anything, or sense anything except my own posture. I knew when I was sitting, or standing, or walking, or running, or doubled up like a contortionist, but I felt nothing at all.

I screamed. I could hear the scream, and I shouted for help. Nothing answered.

Dead. This was like nothing any religion had ever taught. Not that I’d ever caught any of the religions going around, but none had warned of this. I certainly wasn’t in Heaven, and it was too lonely to be Hell.

It’s like this, Carpentier: this is Heaven, but you’re the only one who ever made it
. Hah!

I couldn’t be dead. What, then? Frozen? Frozen! That’s it, they’ve made me a corpsicle! The convention was in Los Angeles, where the frozen-dead movement started and where it had the most supporters. They must have frozen me, put me in a double-walled coffin with liquid nitrogen all around me, and when they tried to revive me the revival didn’t work. What am I now? A brain in a bottle, fed by color-coded tubes? Why don’t they try to talk to me?

Why don’t they kill me?

Maybe they still have hopes of waking me. Hope. Maybe there’s hope after all.

It was flattering, at first, to think of teams of specialists working to make me human again. The fans! They’d realized it was their fault, and they’d paid for this! How far in the future would I wake up? Even the definition of
human
might have changed.

Would they have immortality? Stimulation of psychic power centers in the brain? Empires of thousands of worlds? I’d written about all of these, and my books would still be around! I’d be famous. I’d written about—

I’d written stories about future cultures raiding corpsicles for spare parts, transplants. Had that happened to me? My body broken up for spare parts? Then why was I still alive?

Because they couldn’t use my brain.

Then let them throw it out!

Maybe they just couldn’t use it yet.

couldn’t tell how long I was there. There was no sense of time passing. I screamed a lot. I ran nowhere forever, to no purpose: I couldn’t run out of breath, I never reached a wall. I wrote novels, dozens of them, in my head, with no way to write them down. I relived that last convention party a thousand times. I played games with myself. I remembered every detail of my life, with a brutal honesty I’d never had before; what else could I do? All through it, I was terrified of going mad, and then I’d fight the terror, because that could drive me mad—

Nothing happened, of course.

Pull the plug and let me die! Make it stop! Get me out of here!

Hey, Carpentier. Remember “The Chill”? Your hero was a corpsicle, and they’d let his temperature drop too low. His nervous system had become a superconductor. Nobody knew he was alive in there, frozen solid but thinking, screaming in his head, feeling the awful cold—

No! For the love of God, get me out of here!

was lying on my left side in a field, with dirt under me and warm light all around me. I was staring at my navel, and I could see it! It was the most beautiful sight I’d ever imagined. I was afraid to move; my navel and I might pop like a soap bubble. It took a long time to get the nerve to lift my head.

I could see my hands and feet and the rest of me. When I moved my fingers I could see them wiggle.

There wasn’t a thing wrong with me. It was as if I had never fallen eight stories to be smashed into jelly.

I was clothed in a loose white gown partly open down the front. Not very surprising, but where was the hospital? Surely they didn’t waken Sleepers in the middle of a field?

They? I couldn’t see anyone else. There was a field of dirt, trampled here and there, sloping downhill to become a shiny mud flat. I raised my head, and he was standing behind me. A fat man, tall but dumpy and chunky enough that at first I didn’t notice his height. His jaw was massively square and jutted out, the first thing I noticed about his face. He had wide lips and a high forehead, and short, blunt, powerful fingers. He wore a hospital gown something like mine.

Stranger in My House (A Murder In Texas) by Mari Manning
The Hellion and The Heartbreaker by McNare, Jennifer
The Gold Masters by Norman Russell
Blind Faith by Rebecca Zanetti
Rajan's Seduction by Remmy Duchene
The Mystery of the Black Raven by Gertrude Chandler Warner
The Darkness and the Deep by Aline Templeton
Companions in Courage by Pat LaFontaine, Ernie Valutis, Chas Griffin, Larry Weisman
Revenge by Sierra Rose
Death Sentence by Roger MacBride Allen