Read In Her Sights Online 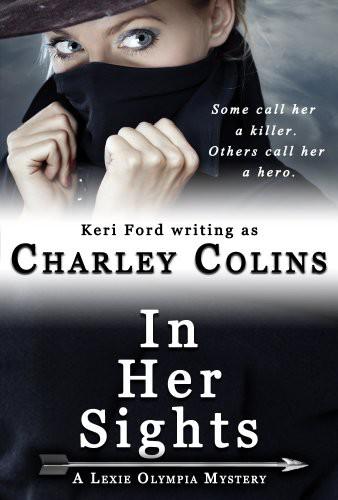 All rights reserved. The
unauthorized reproduction or distribution of this copyrighted work, in whole or
part, in any form is illegal without written permission of the author, Keri
Ford.

This is a work of fiction.
Characters, settings, names, and occurrences are a product of the author’s
imagination and bear no resemblance to any actual person, living or dead,
places or settings, and/or occurrences. Any incidences of resemblance are
purely coincidental.

I have so many people to thank for
the making of this book. My editors who worked hard on it: Susan, Caro, and
Suzan. Lanie at NinjaMel Designs who created the perfect cover. Ella Drake,
Sasha Devlin, Sidney Bristol, Heather McKenna, Rachel Duff Tinsley for reading
and giving feedback. Goodness, I hope I haven’t forgotten any of you!

Cynthia D’Alba for always believing
in this story. You fell for Lexie years ago when I first wrote her. She’s
changed a lot over the years and I hope you fall for her all over again.

This is going to sound strange, but
thank you to the editors and agents for rejecting this story. Y’all were
queried with different versions along the way. Many of you made requests, some
made R&Rs. While I thought Lexie was ready to be published then, I now she
see wasn’t even close. Thank you for not sending me out with my skirt tucked in my
panties.

To my dear husband, Matt, who not
only encouraged me to take up writing, but has supported me along the way. On
this story you’ve gone the extra mile and proofread it too. Thanks to you, I
now know men have shirt pockets, not breast pockets. Love you.

Some call her a killer.

Others call her a hero.

Lexie Olympia calls herself neither.
She’s getting the job done because she can. A beloved philanthropist by day who’s
nicknamed
Melville’s Sweetheart
, Lexie has the city wrapped around her
little finger. Having been a victim in the past, left behind with the killer
still on the loose, Lexie knows what it’s like to live with that fear. Instead
of biting her nails over it, she takes action. Drug lords, gang leaders, con
artists, kidnappers, serial killers, anyone who leaves behind innocent victims
are marked on Lexie’s list.

When a neighbor leaves a stolen ancient dagger on her doorstep
and skips town, Lexie’s left picking up the pieces. The police, a local private investigator,
and a gang are all after this artifact and Lexie uses her nighttime persona, Artemis,
to get to the bottom of things. Everything is going smoothly until she gets caught.

Lexie Olympia stood over her nightstand and debated between the
.38 special and the Taser. Whoever was breaking into her safe downstairs deserved
to have the .38 for an early breakfast, but it would create a huge mess. Not
just blood. Particles and pieces. It would splatter over whatever was near his
head. Considering the location of the thief leaning in her safe, the snub nose
gun would have brain matter landing all over her diamonds.

Ruining millions of dollars in precious stones was bad, but
it wasn’t the worst of it. It was after three in the morning. Daylight was way
too close to be dumping a dead body. And calling the police after shooting him would
guarantee the newspapers. Like hell would she have a photograph of a chalk
outline on her marble floors printed. Or worse, the photographers could make
some tacky request for her to pose with the gun.

A chill went over her shoulders.

She shook and grabbed the Taser. Fifty thousand volts
pulsing through his nervous system would do the trick. Looked like she’d be the
lucky Ms. Olympia tonight who bravely caught a man sneaking around her home.

She unclicked the probe cartridge and pulled the trigger. Electricity sparked and
sizzled, signaling it was ready to go. She re-inserted the probes and hurried
down the hall. Her pink slippers with fluffy white lambs jumping over fences
silenced her steps. That and years of training that taught her how to move quickly, but silently.

At the top of the stairs, she checked the security feed to
her phone to see her intruder was still there and still elbow deep in her safe.
Good. Just stay there one more minute and she’d light him up more than Mrs.
Abrenger did her yard for the holidays. For the first time, the thought of all
those giant snowmen, numerous candy canes, and nonstop flashing lights put a
smile on Lexie’s face.

She slung her leg over the mahogany stair railing and slid
to the second floor landing. Then repeated to the bottom level. Her toes made not
a sound as she eased off the banister to the floor. The burglar on camera didn’t
startle or even pause. Instead he continued pawing her diamonds. Anything in
that safe was easily replaceable, but if he took her new custom designed emerald
bracelet and went out the window before she got there, she’d hunt him down like
the low-down, dirty thief deserved to be. That bracelet was needed to match a
dress she had plans for next week.

This thief was good, having made it this far without her
knowledge. She’d give him that. It was farther than anyone else had gotten. Had
she not already been awake and staring at her phone at the time, it was
possible she’d have missed him altogether. He’d done his research and
discovered not only her primary security system, but also the back-up. Unfortunately
for him and anyone else who tried, there was no paper trail on the very small
camera installed on her safe. Then also just her. Everyone underestimated Lexie
Olympia. A very big mistake. Satisfying warmth snaked through her blood.

The sweet and innocent Ms. Lexie Olympia role she played
during the day was all part of her disguise.

She eased around the edge of the stair railing and peeked
down the north hallway. It was dark, and she hurried toward her office. She
wanted to be there before he was finished so she could take him by surprise.

She slipped inside her office. The deep room with a small
table and chairs, sitting area, and large desk all appeared normal. Moonlight
streamed through the window on the far wall, adding a highlight to each item.
Even a sheen of light touched the edges of the usually closed, but this time
opened door to the small storage room containing her safe.

Careful of items in the room, she crept closer and peeked
inside. There her thief stood. His back to her, arms inside her safe. Seeing him on camera was one thing. Seeing him in her things
in person infuriated her all over again. Her pulse throbbed through her veins,
but after years of training, her breath was controlled and silent.

He had wide shoulders. From her angle behind him, he
appeared to have thick arms. Legs shoulder-width apart and built, by the looks
of the way they fit his cargo pants. He had the kind of build she tended to
avoid for hand-to-hand combat unless it was necessary. She was skilled, fast,
and in shape. She was also only five-ten and one thirty-five. One well-landed
punch from arms that size and nothing else would matter. It’d be over with
because she’d be unconscious.

He straightened and grunted like he was frustrated. If he
thought it was bad trying to rob her, he should try being robbed a time or two.
She resisted a grunt of her own. Time to get this over with. She lifted the Taser
and aimed to take him before he had a chance to swing at her. Finger on the trigger,
she started depressing, but halted a moment as he continued to look around
through her things. His flashlight scanned over the contents of her safe. Light
caught on the cuts of the many stones and reflected the beams into prisms of
light. His shoulders worked. Hands deftly moved through the rows. Lifting,
moving. Rearranging.

The device still raised and ready, she watched before taking
him down. After a bit, he grumbled and cursed under his breath. He had taken
nothing in the thirty seconds she’d stood there. In that time, he should have
nearly cleaned her out. One sweep of his arm across a shelf would deposit all
he needed for an early retirement into a bag.

But there was no bag in his hand. She relaxed her arms,
bending her elbows and bringing the Taser against her shoulder. There wasn’t a
bag on the floor. Not even a box or a backpack. Nothing was near him to load
items into.

The hairs at the nape of her neck prickled. She had secrets
in her home. If that’s what he was after, he wouldn’t walk out of here alive.

He stepped back, and she readied the weapon again with her
arms out. His hands landed on his hips a moment before he rubbed the back of
his neck and reached back in. She knew the mark and movements of a
professional, and he wasn’t one. He took too long. Was unaware of his
surroundings. She stood there longer and easily watched him as he picked
through rows. She could have danced back here in one of her flashiest ball
gowns and he wouldn’t have known.

Definitely not a professional. Pros knew the dangers of
lingering. More so to make a sound. Extremely careless to have never once
looked over his shoulder. He should have been in and out just in the time she’d
stood watching him.

By the good fit and strong material of his clothes, though,
he wasn’t some lowlife poor man looking to steal something to pay for his next
habit. There was no stench in the air hinting at homeless or drunk. To her
knowledge, he so far hadn’t taken anything either. The sound equipment
headphones used to crack the safe were still clipped around his neck. Those
weren’t cheap.

This man seemed to be after something and she needed to know
what. By the looks of things, this was shaping up to be a long night. Not like
she’d been sleeping anyway.