Read In for a Ruble Online

In for a Ruble 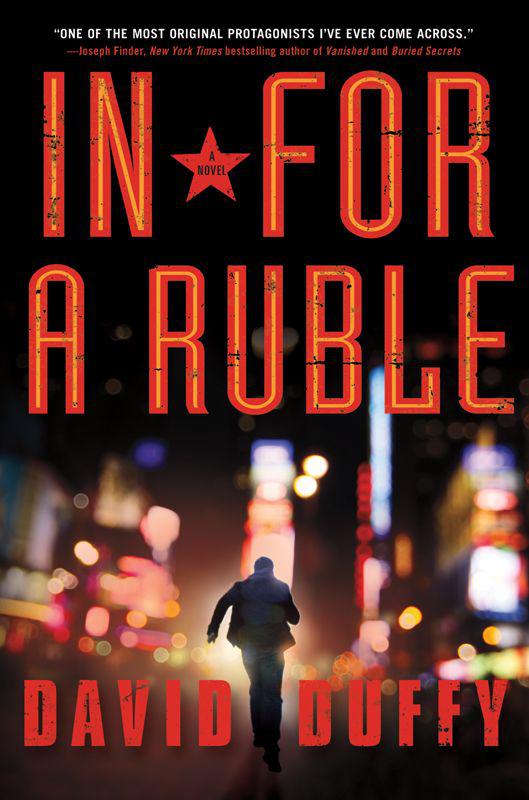 Week One: The Deal

Week Three: All In

WEEK ONE: THE DEAL

Everything about Sebastian Leitz was big. The man himself was six foot four and weighed two-eighty easy. A tractor tire wrapped his midsection, he wore size fourteen shoes, and nobody made gloves to fit his hands. The outsize head, with its fat pear nose, kidney-pool blue eyes and inflated inner-tube lips, made him seem larger still. The head was topped by a bushy, orange Afro that had last seen the barber when Brezhnev was general secretary of the Communist Party of the Soviet Union. A circus clown on steroids. His voice—a foghorn bass—could’ve filled a big top.

Leitz needed the big head to hold the brain. He’d earned two doctorates, mathematics and economics, from Harvard and MIT. He’d written countless papers and a half dozen books. He was a full professor at Columbia by twenty-six. People were talking Nobel Prize by thirty. That was before he quit academics and went to Wall Street to make big money.

Leitz was worth several billion, and he’d made it all himself—in little more than a decade. His hedge funds regularly ranked high on the performance charts, and Leitz himself consistently topped the compensation tables.

He had a blowback laugh and a blow-up temper. Both blew with the force of a saboteur’s bomb—unseen, unexpected, until they knocked everybody in range off their feet. As I came to find out, not everyone got back up.

He had strong opinions and was willing to state them loudly and longly if he thought there was reason to do so. Otherwise he didn’t waste breath. He ignored anyone he pegged as foolish or stupid. He didn’t give a damn what they thought of him.

Leitz had a big penchant for secrecy. No one at his firm (other than himself, of course) was allowed to take anything home from the office. An idle comment in the elevator, if it involved the company’s business, was a firing offense. He hated losing—big time. He was known to throw whatever was in reach at whomever put him on the wrong end of a trade. When I met him, he was working on the biggest deal of his life—buying and merging two of America’s TV networks, thereby taking hold of a big chunk of the media landscape. His bid had dominated the financial press and the tabloids for weeks.

Leitz was a force of nature—one of those people God or whoever is in charge put here from time to time to shake things up, make life interesting. I suppose, despite everything, that’s why I liked him. But all the size and smarts, money and privilege in the world are no guarantee you won’t fuck it up.

I didn’t know any of this the first time we met. I didn’t know much beyond what the press told me about his TV bid—
BOLD! BIG TIME! BIG BET ON THE NEW FUTURE OF OLD MEDIA!
—and his wealth. The New York papers were more forthcoming than Leitz’s friend and my partner, Foster Klaus Helix, known as Foos, who arranged the meeting.

“How successful is he?” I asked.

“S&P was up twelve percent last year. He do better than that?”

I let it go. I didn’t really want the meeting. I didn’t want the client. Leitz sounded like a bigger, richer, more opinionated pain in the ass than my last client, and he and his family turned out to be big trouble. But that was just an excuse. Truth be told, I didn’t feel like doing much of anything, I hadn’t in months. I was still thinking, unsuccessfully, about the woman who’d turned my life upside down before she walked out of it without even a kiss good-bye. She’d warned me she’d do that, twice, and she’d been true to her word. I couldn’t blame her. I’d done my part to show her the door. I hadn’t meant to, I’d had no choice. We’re all our own best friend and enemy, as one of our proverbs puts it.

I kept hoping against hope she’d change her mind and come back. That carried me through the first few weeks. Then I heard she’d left her job—a high-profile appointment as United States Attorney for the Southern District of New York, something she’d worked hard to get—and blown town. After two weeks of not wanting to get out bed, I tried to convince Foos to let me use the Basilisk to find her. Maybe if I followed wherever she’d gone, pleaded my case, recanted, promised to change, she’d see the error of her ways. I didn’t really believe it, but I had to try. Not that it mattered—Foos refused flat out.

“What makes you think I’m dumb enough to choose sides?”

“She got to you, didn’t she? Before she left. Made you promise not to help. What was the bribe? I’ll double it.”

He smiled and went back to banging on his computer keyboard. I don’t know which was worse, the depression or the frustration. I knew the Basilisk could find her. That beast can find anyone. But its master wasn’t cooperating.

“Don’t believe everything you read in the papers,” Foos said. I was doing more research in preparation for our meeting.

I ignored him on the grounds he was making me do my own homework—and I was still pissed off. I told myself Foos was right, I needed something to occupy my mind. I didn’t really believe that either, but the alternatives for the day—vodka, beer, more vodka and beer—worked in his favor.

Even before he strode upon the media stage, Leitz cut a big swath, not that hard to do in New York if you’ve got the funds. He donated his way onto the boards of the Guggenheim Museum, Carnegie Hall and his teaching alma mater, Columbia. He bought expensive pictures at Sotheby’s and Christie’s, often bidding for himself instead of hiding behind a dealer or auction house functionary. He threw high-profile parties at his East Side mansion, packed with celebrities who invested in his hedge funds. He wasn’t afraid to tell any reporter who’d listen that the government should stay the hell out of the hedge fund business. He might have been giving second thought to some of those comments, since the government—in the form of the SEC, FTC, FCC and Department of Justice—could have a lot to say about whether he was allowed to pursue the current objects of his desire. Still, not bad for a second-generation immigrant kid from Austria via Astoria.

Leitz came from a big family—a brother and two sisters, four kids in all. He lived in a double-fronted brick town house on East Sixty-second Street, to which he’d added the brownstones on either side, giving him twelve windows across the front—a ton of real estate anywhere, an enormity in Manhattan. I guess he needed room for
his
two kids (from two wives), housekeeper, nanny, and pair of Bernese mountain dogs, which I initially mistook for small Saint Bernards and was quickly corrected.

Foos had known Leitz before he became rich, when they were both ordinary, working-stiff, academic geniuses. They’d met at some conference of eggheads while Foos was at the Institute for Advanced Study in Princeton and Leitz at Columbia. Probably struck up a friendship over the lunch buffet—the two biggest brains and bodies in the room. Both left academics soon afterward, Leitz to Wall Street and Foos to move modern data mining forward several decades in as many years.

After Foos sold his company, he gave Leitz some of his fortune to invest along with a chunk of the assets of the foundation he endowed and runs—STOP, short for “Stop Terrorizing Our Privacy.” I’d read Leitz required a minimum investment of $5 million and regularly racked up returns north of 30 percent a year, after fees of 3 percent of assets under management and the first 30 percent of profits earned. Fees were another big thing about him.

When I asked Foos about that, I got the usual, “Leitz does okay.”

I gave up. I checked STOP’s records, which I’m entitled to do since I’m the other member of the board, although Foos neglects to send me financial reports—or any other reports for that matter. I don’t know how much of STOP’s money Leitz invested, since the assets could be spread among multiple managers. STOP’s most recent tax return, which I downloaded from the Internet, showed total assets of $208 million. It started with $50 million five years ago. The markets had tanked in the interim. Leitz indeed appeared to be doing okay.

On our way uptown, I again pressed Foos about his friend.

“What happened to the first Mrs. Leitz?”

He looked out the window, and we rode in silence the rest of the way. In the twenty years I’d spent with the KGB, I’d never heard of anyone standing up against a full-bore Cheka interrogation. Given the chance, Foos could’ve been the first.

Someone had left the
Post
on the cab’s backseat.
NEW BIDDERS EXPECTED IN TV WAR,
the headline read. The story cited Wall Street sources, all unnamed, stating that several consortia, involving everyone from Warren Buffet to Bill Gates to a couple of Chinese billionaires, were in the process of putting together offers to rival Leitz’s. Wall Street was in full M&A—merger and acquisition—frenzy. The fees alone were expected to run into the hundreds of millions. The ensuing battle could last months.

Normally, I’m as caught up as the next guy in stories like this one, events that promise change and upheaval in the landscape—economic, social and cultural—of my adopted country. My natural curiosity (a character trait I’ve never tried hard to tame) would be working overtime at the prospect of meeting the man who’d set it in motion. But today as I read the story, noted the names, registered the humongous amounts of cash involved, I felt no spark. Whatever Leitz wanted didn’t matter much. He might occupy my time, perhaps a bit of my attention, for a day, a week or a month, but he and his bidding war wouldn’t do a damned thing to alter the fucked-up mess that had become my life.

At the corner of Madison and Sixty-second, Foos paid the driver. We walked half a block east. The morning was bright and crisp, not too cold for the second week of January. The remnants of a New Year’s storm lined the sidewalks, mostly frozen slush now, covered with a coat of city grime, nothing compared with the three feet of black encrusted snow I’d left in Moscow back before Christmas.