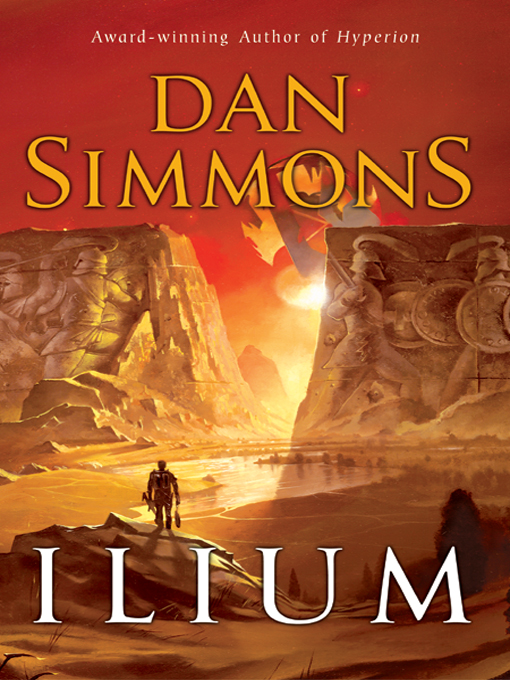 This novel is dedicated to Wabash College—
its men, its faculty, and its legacy

Mean while the Mind, from pleasure less,
Withdraws into its happiness:
The Mind, that Ocean where each kind
Does straight its resemblance find;
Yet it creates, transcending these,
Far other Worlds, and other Seas;
Annihilating all that’s made
To a green Thought in a green Shade.

Of possessions
cattle and fat sheep are things to be had for the lifting,
and tripods can be won, and the tawny high heads of horses,
but a man’s life cannot come back again, it cannot be lifted
nor captured again by force, once it has crossed the teeth’s barrier.

A bitter heart that bides its time and bites.

12   Above the Asteroid Belt

22   The Coast of Chryse Planitia

33   Jerusalem and the Mediterranean Basin

54   The Plains of Ilium and Olympos

Other Books by Dan Simmons

When my kid brother and I used to take our toy soldiers out of the box, we had no problem playing with our blue and gray Civil War soldiers alongside our green World War II guys. I prefer to think of this as a precocious example of what John Keats called “Negative Capability.” (We also had a Viking, a cowboy, an Indian, and a Roman Centurion flinging grenades, but they were in our Time Commando Platoon. Some anomalies demand what the Hollywood people insist on calling a backstory.)

With
Ilium,
however, I thought a certain consistency was required. Those readers who teethed, as I did, on Richmond Lattimore’s wonderful 1951 translation of the
Iliad
will notice that Hektor, Achilleus, and Aias have become Hector, Achilles, and Ajax (Big and Little). In this I agree with Robert Fagles in his 1990 translation that while these more latinized versions are farther from the Greek—Hektor versus Akhilleus and the Akhaians and the Argeioi
—
the more faithful version sometimes sounds like a cat coughing up a hairball. As Fagles points out, no one can claim perfect consistency, and it tends to read more smoothly when we return to the traditional practice of the English poets by using Latinate spellings and even modern English forms for the heroes and their gods.

The exception to this, again as per Fagles, is when we would have Ulysses instead of Odysseus or, say, Minerva replacing Athena. Alexander Pope in his incredibly beautiful translation of the
Iliad
into heroic couplets had no problem with “Jupiter” or “Jove” ripping Ares (not Mars) a new one, but my Negative Capability falters here. Sometimes, it seems, you have to play with just the green guys.

Note: For those readers who, like me, have problems in an epic tale telling the gods, goddesses, heroes, and other characters apart without a scorecard, I would refer you to our
dramatis personae
beginning on page 573
.

1
The Plains of Ilium

Oh, and sing of me, O Muse, poor born-again-against-his-will Hockenberry—poor dead Thomas Hockenberry, Ph.D., Hockenbush to his friends, to friends long since turned to dust on a world long since left behind. Sing of
my
rage, yes, of my
rage,
O Muse, small and insignificant though that rage may be when measured against the anger of the immortal gods, or when compared to the wrath of the god-killer, Achilles.

On second thought, O Muse, sing of nothing to me. I know you. I have been bound and servant to
you,
O Muse, you incomparable bitch. And I do not trust you, O Muse. Not one little bit.

If I am to be the unwilling Chorus of this tale, then I can start the story anywhere I choose. I choose to start it here.

It is a day like every other day in the more than nine years since my rebirth. I awaken at the Scholia barracks, that place of red sand and blue sky and great stone faces, am summoned by the Muse, get sniffed and passed by the murderous cerberids, am duly carried the seventeen vertical miles to the grassy summits of Olympos via the high-speed east-slope crystal escalator and—once reported in at the Muse’s empty villa—receive my briefing from the scholic going off-shift, don my morphing gear and impact armor, slide the taser baton into my belt, and then QT to the evening plains of Ilium.

If you’ve ever imagined the siege of Ilium, as I did professionally for more than twenty years, I have to tell you that your imagination almost certainly was not up to the task. Mine wasn’t. The reality is far more wonderful and terrible than even the blind poet would have us see.

First of all there there is the city, Ilium, Troy, one of the great armed poleis of the ancient world—more than two miles away from the beach where I stand now but still visible and beautiful and domineering on its high ground, its tall walls lighted by thousands of torches and bonfires, its towers not quite as topless as Marlowe would have us believe, but still amazing—tall, rounded, alien, imposing.

Then there are the Achaeans and Danaans and other invaders—technically not yet “Greeks” since that nation will not come into being for more than two thousand years, but I will call them Greeks anyway—stretched mile after mile here along the shoreline. When I taught the
Iliad,
I told my students that the Trojan War, for all its Homeric glory, had probably been a small affair in reality—some few thousands of Greek warriors against a few thousand Trojans. Even the best informed members of the
scholia
—that group of
Iliad
scholars going back almost two millennia—estimated from the poem that there could not possibly be more than 50,000 Achaeans and other Greek warriors drawn up in their black ships along the shore.

They were wrong. Estimates now show that there are more than 250,000 attacking Greeks and about half that number of defending Trojans and their allies. Evidently every warrior hero in the Greek Isles came running to this battle—for battle meant plunder—and brought his soldiers and allies and retainers and slaves and concubines with him.

The visual impact is stunning: mile upon mile of lighted tents, campfires, sharpened-stake defenses, miles of trenches dug in the hard ground above the beaches—not for hiding and hunkering in, but as a deterrent to Trojan cavalry—and, illuminating all those miles of tents and men and shining on polished spears and bright shields, thousands of bonfires and cooking fires and corpse fires burning bright.

For the past few weeks, pestilence has been creeping through the Greek ranks, first killing donkeys and dogs, then dropping a soldier here, a servant there, until suddenly in the past ten days it has become an epidemic, slaying more Achaean and Danaan heroes than the defenders of Ilium have in months. I suspect it is typhus. The Greeks are sure it is the anger of Apollo.

I’ve seen Apollo from a distance—both on Olympos and here—and he’s a very nasty fellow. Apollo is the archer god, lord of the silver bow, “he who strikes from afar,” and while he’s the god of healing, he’s also the god of disease. More than that, he’s the principle divine ally of the Trojans in this battle, and if Apollo were to have his way, the Achaeans would be wiped out. Whether this typhoid came from the corpse-fouled rivers and other polluted water here or from Apollo’s silver bow, the Greeks are right to think that he wishes them ill.

At this moment the Achaean “lords and kings”—and every one of these Greek heroes is a sort of king or lord in his own province and in his own eyes—are gathering in a public assembly near Agamemnon’s tent to decide on a course of action to end this plague. I walk that way slowly, almost reluctantly, although after more than nine years of biding my time, tonight should be the most exciting moment of my long observation of this war. Tonight, Homer’s
Iliad
begins in reality.

Oh, I’ve witnessed many elements from Homer’s poem that had been poetically misplaced in time, such as the so-called Catalogue of Ships, the assembly and listing of all the Greek forces, which is in Book Two of the
Iliad
but which I saw take place more than nine years ago during the assembly of this military expedition at Aulis, the strait between Euboea and the Greek mainland. Or the
Epipolesis,
the review of the army by Agamemnon, which occurs in Book Four of Homer’s epic but which I saw take place shortly after the armies landed here near Ilium. That actual event was followed by what I used to teach as the
Teichoskopia,
or “View from the Wall,” in which Helen identifies the various Achaean heroes for Priam and the other Trojan leaders. The
Teichoskopia
appears in Book Three of the poem, but happened shortly after the landing and
Epipolesis
in the actual unfolding of events.

If there
is
an actual unfolding of events here.

At any rate, tonight is the assembly at Agamemnon’s tent and the confrontation between Agamemnon and Achilles. This is where the
Iliad
begins, and it should be the focus of all my energies and professional skills, but the truth is that I don’t really give a shit. Let them posture. Let them bluster. Let Achilles reach for his sword—well, I confess that I’m interested in observing that. Will Athena actually appear to stop him, or was she just a metaphor for Achilles’ common sense kicking in? I’ve waited my entire life to answer such a question and the answer is only minutes away, but, strangely, irrevocably . . . I . . . don’t . . . give . . . a . . . shit.

The nine years of painful rebirth and slow memory return and constant warfare and constant heroic posturing, not to mention my own enslavement by the gods and the Muse, have taken their toll. I’d be just as happy right now if a B-52 appeared and dropped an atomic bomb on both the Greeks and the Trojans. Fuck all these heroes and the wooden chariots they rode in on.

But I trudge toward Agamemnon’s tent. This is my job. If I don’t observe this and make my report to the Muse, it won’t mean loss of tenure for me. The gods will reduce me to the bone splinters and dusty DNA they re-created me from and that, as they say, will be that.