Read If the Shoe Fits Online

If the Shoe Fits 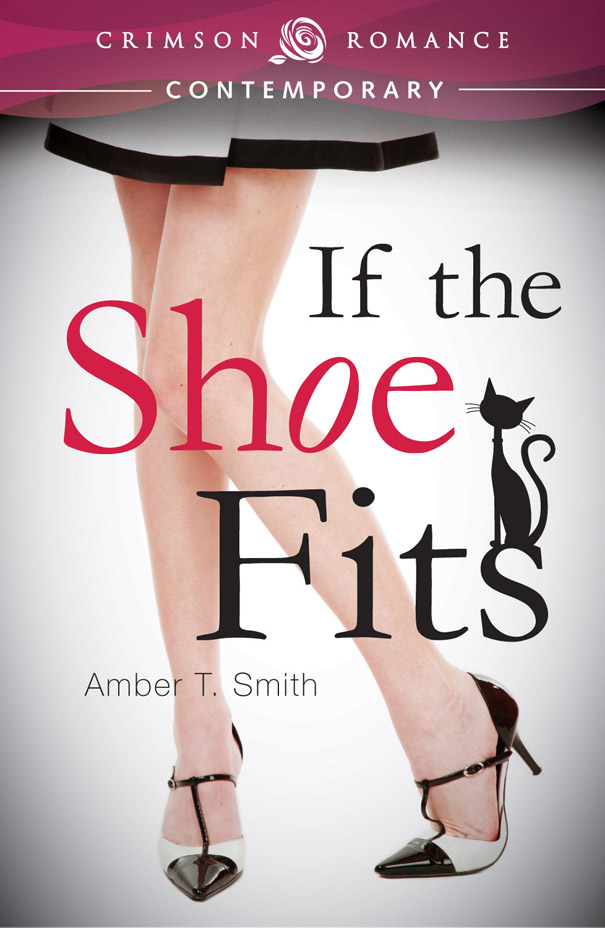 This is a work of fiction. Names, characters, corporations, institutions, organizations, events, or locales in this novel are either the product of the author's imagination or, if real, used fictitiously. The resemblance of any character to actual persons (living or dead) is entirely coincidental.

A Sneak Peek from Crimson Romance

Writing a modern fairy tale requires huge leaps of imagination, not to mention healthy doses of reality now and again to keep things grounded. This particular fairy tale had a lot of help from several fairy godmothers in various guises, but particular thanks must go to llamas, penguins, word nerds, slug lovers, wizard fans, an Elf, and a wench or two. You know who you are. Lastly, I give thanks to my family; the Ghost, the Dreamer, and the Princess-in-Waiting, who were endlessly patient with me while I lost myself in my imaginary world.

Here's to the next fairy tale!

Eleanor Gibson woke up to the persistent meowing of her cat. She groaned and buried herself a little deeper beneath the duvet, gently kicking her feline companion away from her.

Of course, telling her cat to go away wouldn't work â it never did â but at least it gave Eleanor a few extra seconds of warmth. Or so she thought. A sharp digging sensation in the middle of Eleanor's back was all it took to end those precious few seconds of comfort. Grumbling under her breath, Eleanor threw the duvet into a messy heap on the floor and stood up, stretching and yawning as she did so.

“You could have left me a few moments longer, Muse. You know I had a rough night last night.”

Muse pricked her ears and walked away with her tail in the air.

“It's all right for you,” continued Eleanor. “
You
don't have to speak to my visitors.”

The previous evening had seen the (unwanted) weekly visit from her ex-stepmother. Christie Gibson was, in two words, a bitch. She had crawled into Teddy Gibson's life six months after Eleanor's mother had died, and it had taken three years to get rid of her. Teddy woke up one day about three months after his hasty second marriage, and realized that he had married, well, a bitch. Luckily, Eleanor had been able lend support to her somewhat dithering father and, by sending him away on a month-long cruise, had finally been able to persuade Christie to sign the divorce papers.

Well, maybe persuade was the wrong choice of word, but Eleanor had run out of reasonable ideas, so the rather strong coercion technique that she had used was, in her opinion, justified.

The trouble was, Christie was still angry, and she chose to vent this anger by calling upon her ex-stepdaughter every Monday.

“You owe me, Eleanor Gibson, and never forget it!”

Christie's words came back and replayed themselves once again. If it wasn't so annoying, Eleanor would be tempted to laugh. Christie had been uttering the same thing every week for the last eighteen months. At first it had been a little bit daunting, but now it was bordering on hysterical. Maybe she should feel guilty for claiming that her father had a terminal disease and had already signed over his monies and estate to his daughter.
Maybe
. But honestly, the look of horror on her ex-stepmother's face â when she realized she could be stuck with an increasingly dependent husband with no reward at the end of it â was enough to wave away any feelings of shame that Eleanor might have felt. Christie Gibson was more than a bitch, she was a â¦

Eleanor tried to act cross, but honestly, Muse's timely interruption was just what she needed. If she started the day cursing Christie, she wouldn't get anywhere at all. And â¦

Hastily emptying half a box of cat biscuits into Muse's dish, Eleanor dashed upstairs and headed for the shower.

Eleanor quickly ran for the elevator as soon as she reached the offices of Cardiff Mode. She loved working for a modeling agency, even though she knew that half the time she was simply the errand girl. There was something about the glamour that attracted her. Normally, Eleanor was a very practical young woman, but the world of modeling had always fascinated her.

Eleanor was short, skinny, and had an unremarkable face topped with a full head of extremely frizzy black hair. She had known from a very early age that she could never hope to be a model, but she hadn't let that stop her from wanting to become a part of the modeling world.

After dreaming her way through school and college, Eleanor came away with no qualifications except a heap of enthusiasm. She had entered her present job right at the bottom of the career ladder. In fact, if she was honest with herself, she didn't even have a foot on the first rung. But that was fine with her, she'd always been a solid “both feet firmly on the floor” kind of girl anyway. Right now she was fetching drinks and making phone calls, but she was so efficient at these seemingly menial tasks that everyone at Cardiff Mode loved her.

“Thanks, Derek,” she replied, forcing a smile to her lips.
Damn, why is he always there when the elevator doors open?
If Derek had even an ounce of genuineness about him, she might have liked him. He was romance-novel handsome with his slightly too long dark, wavy hair, pumped up biceps, and slim hips, but unfortunately he was afflicted with a smarmy disposition. Derek was under the impression that all women adored him, when in fact most women tried to run in the opposite direction when they saw him.

“Heavy night last night, was it?” he drawled suggestively.

“Drinks at Harper's after work?” he called at her retreating back. Eleanor pretended not to hear him and made a mental note to avoid Harper's like the plague as soon as she finished her shift. She raced to Jake's office and made it with two minutes to spare.

Jake waved his arms vaguely and Eleanor cut off her explanation, smiling gratefully at the man standing in front of her.

If ever there was a man worthy of drooling over, it was Jake Morrison. Jake had started out as a model and had been at the top of his game for four years before taking early retirement. He had thick blond hair that teased the collar of his designer shirt, and his equally designer jeans hugged one of the cutest butts Eleanor had ever had the privilege of seeing. So to speak.

Unfortunately, as well as being drop-dead gorgeous, Jake was also gay. Eleanor might have been tempted to try and change his mind, but one, that never worked in the real world, and two, Jake was seeing an equally gorgeous male by the name of Danny Butler. It had taken Eleanor a while to get over the disappointment of realizing that the two most gorgeous men of her acquaintance were never going to look at her as anything more than a sister, but in the process she had made two of the best friends she had ever had.

“Have I told you lately that I love having you for a boss?” she sighed.

“Yesterday, I believe,” snorted Jake. “And I'm not your boss, anyway.”

“Every single person who works here is my boss, Jake,” she pointed out.

“Ah, that may be so, sweetie, but you have to start somewhere.”

“I know. I'm not really complaining, Jake. I think I woke up on the wrong side of the bed this morning.”

“Darling, you really need to try a new bed. It'll do wonders for your state of well-being.”

“Oh, not at
your
house, sweetie, I mean someone
else's
bed. You've been single for far too long.”

“Darling, having a cat for a bedmate is not my idea of âfine'. You need a nice strapping lad to fill the position. I'd lend you mine, but I'm not willing to share.”

“Shame,” teased Eleanor. “Anyway, as you're my boss, shouldn't you be ushering me towards the door round about now?”

“Nah, we've got plenty of time before Dumb and Dumber arrive.”

“Jake, you really shouldn't be calling Cardiff Mode's two top models âDumb' and âDumber'. Especially seeing as they are both far from being dumb. And I thought you told me nine o'clock?”

“I know, but it annoys them and I get lots of lovely smoldering looks when I'm clicking away. And I said nine because I need them here by ten. Brainier than the average blonde they may be, but they aren't the best time-keepers.”

“As always, darling. Say, now that we have the time, what say we grab a coffee at Starbucks? They have a fabulous new muffin that I'm dying to try.”

Jake was a huge muffin fan, and consequently Eleanor knew most of the staff at the neighboring Starbucks by their first names. She also knew when they were trying out new muffins.

“Voila!” she said, pulling a paper bag from her fashionably large carryall.

“Darling, I love you!” said Jake dramatically, grabbing the bag and blowing a kiss at her.

“And here I thought it was
me
you truly loved,” sighed Danny as he entered the office. “Ooh, are those muffins?”

Eleanor giggled as both men reached into the bag and extracted a still-warm muffin each, biting into them simultaneously and sighing blissfully.

“What's the occasion?” asked Danny, finishing his muffin in three quick bites and reaching for another.

“I missed breakfast,” replied Eleanor, quickly grabbing a muffin for herself before they all disappeared.

“Oh darling, I forgot, it's Tuesday! No wonder you were late,” said Jake in his best brotherly-concern voice. “And how
was
Agatha?”

Eleanor rolled her eyes and snorted at the same time. Ever since Jake had learned the name of her ex-stepmother, he had taken to calling her “Agatha”. Obviously, the link with the famous author had been evident, but Jake had coined the nickname primarily because being called “Agatha” drove Christie up the wall.

“Sweetie, have another muffin,” said Jake gravely. “You need it more than I do.”

“You really have to do something about her, Ella,” added Danny. Jake and Danny had decided that “Eleanor” was too serious a name for their friend, and had dutifully renamed her “Ella” in the spirit of keeping her “young”.

“I know,” replied Eleanor. “I shouldn't let her get to me. Usually it's water off a duck's back, but last night she was even more annoying than usual.”

Reckoning by Jo Leigh
Moonshifted by Cassie Alexander
Texts from Jane Eyre by Mallory Ortberg
Waterdance by Logston, Anne
Anna's Hope Episode One by Odette C. Bell
The Truth About Butterflies: A Memoir by Nancy Stephan
Endless by Jessica Shirvington
Exposure by Mal Peet
A Father's Sins: A Pride and Prejudice Variation by J Dawn King
Magic Kingdom for Sale—Sold! by Terry Brooks