Read If Only in My Dreams Online

If Only in My Dreams 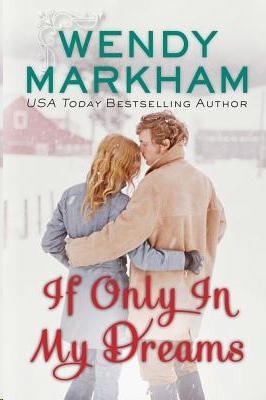 First published in 2006 by Nal/Signet

Published in 2013 by Montlake Romance, Seattle

For my guys, Mark, Morgan, and Brody…

And in loving memory of the three beautiful women our family has lost to breast cancer: my mother, Francella Corsi; my mother-in-law, Claire Staub; and Claire’s sister, Frances Ginsberg.

Silently one by one, in the infinite meadows of heaven,

Blossomed the lovely stars, the forget-me-nots of angels.

T
hat was Glenn Miller and His Orchestra with their newest hit record, ‘Chattanooga Choo Choo.’ And now, before the latest news from Europe, a word from our sponsor, Lifebuoy.”

Lois Landry looked up from the potato she was dicing. “Go turn that off, Doris.” Her voice was sharper than the paring knife in her hand.

“Just do it, toots.” Jed shot his kid sister a warning look.

Doris grumbled her way to the radio in the dining room, where Penny and Mary Ann were carefully setting the table with the fancy Royal Doulton wedding china.

The prized place settings had seen perhaps two dozen Thanksgiving meals in Jed’s lifetime, with a few notable exceptions: 1929, in the wake of the stock market crash, when a turkey dinner was an extravagance the Landrys couldn’t
afford; and again a decade later, when Pop lay dying in an upstairs bedroom and a holiday meal was the last thing on anyone’s mind.

Abner Landry had lingered, comatose, far longer than anyone had expected, as though he were determined to see the trying decade through to its final month. Jed kept a silent, solo vigil at his father’s bedside that long final night, through November’s waning hours and the dawning of December.

There were no profound last words, no dramatic requests or heartfelt promises. Not aloud, anyway. Not from Pop.

But as he clutched his father’s lifeless hand, Jed swore that he would come home for good. He would step into his father’s shoes as head of the household and the family business.

He had kept that vow for two oppressive years now.

What mattered most was that Jed was back in Glenhaven Park, where he’d never expected to be, taking care of things, just like his father would have wanted.

But I’m not going to stay any longer than I have to
.

Crossing the aqua-speckled linoleum to the glass percolator on the white enamel stove top, Jed glanced at the smoky November sky beyond the glass-paned back door, then at the row of hooks on the white painted beadboard beside it.

Funny how he almost expected to see his father’s brown wool jacket draped there even now. In the heat of July he finally convinced his mother to move it to the front hall closet. It hung there still, because Lois couldn’t bear to give it, or any of Abner’s other belongings, away.

Nor could Jed bear to ask her if he could go through the shirts and trousers and dungarees Pop had left behind—much less help himself to them. Granted, at a lanky six three, he was a full head taller than his stout father had been. Still, shirt seams can be taken in, trouser hems let down…

If it wouldn’t tear Mother apart.

Better for Jed to keep spending whatever the household could spare on his brother Gilbert’s college textbooks, or dresses and shoes each time Penny, the oldest of his three sisters, had a growth spurt. The younger girls could make do with her hand-me-downs, just as Gilbert did with Jed’s. And Jed, well aware he couldn’t possibly spare two dollars for a new shirt—much less twenty-five for a suit—would go right on wearing his own outdated clothes.

As he poured another steaming cup of coffee, his mother set aside the potato and the knife and turned away from the sink. He noticed anew that her once-luxurious dark hair was now liberally streaked with gray, and her mouth and eyes were firmly entrenched in wrinkles.

Two years of widowhood had taken a harsh toll on the woman who was once the prettiest gal in New York City, according to Pop.

Over the rim of his mug, he watched her open a white metal cabinet door and stare at the row of home-filled Mason jars and store-bought cans: peaches, green beans, Spam…

“Did you run out of something you need?” he asked at last.

Jed realized she wasn’t even seeing the items on the shelf. No, she was thinking about old times. Her round blue
eyes—Betty Boop eyes, Pop called them—always took on that dazed expression when she thought about her late husband. Bittersweet memories were more plentiful than fallen chestnuts at this time of year, with the looming holidays and anniversary of Pop’s death.

Jed repeated his question as, in the dining room, the radio abruptly went silent.

“Mother told me to do it, so there!” Doris retorted loudly over her older sisters’ prompt protest. Jed pictured her scrunching up her freckled face, twisting her pink-ribboned red pigtails, sticking out her tongue.

As the girls’ voices became more shrill, Jed watched his mother slam the cabinet door and reach for her pack of Pall Malls on the counter.

“For being rude,” Doris bellowed in the dining room.

Lois thrust a cigarette between her cranberry-red-lipsticked mouth, then bent over the stove to light it from the gas burner.

“Do you want me to go in there and straighten things out?” Jed was compelled to offer, though doling out discipline to his siblings was his least favorite household role. The girls resented him; Gilbert defied him outright.

“No, you just sit right down and drink your coffee.” Mother took a deep drag of the Pall Mall as her daughters continued to bicker. “And when you’re done with your coffee, you can go next door and borrow Sarah Wenick’s kitchen
chairs before she leaves for her sister’s house. She’s loaning them to us for the day.”

Both extra leaves were already in the dining room table to accommodate the assorted family members who would share the feast with Jed and his mother, siblings, and maternal grandparents, all of whom lived under this roof. Cousin Amy and her new husband were driving down from Saratoga Springs, and Uncle Elmer, Aunt Marge, and their four children were taking the train up from Brooklyn.

Everyone would do their best to make it a festive day despite their lingering grief, the looming shadow of the war in Europe, and the peacetime draft that had already claimed several of Jed’s old high school pals.

So far he had been spared—a good thing, considering how much he was needed here at home.

But he had yet to reconcile his long-held dreams and ambitions with reality.

From the time he was deemed academically gifted as a child, Jed knew he was destined for great things. His parents and teachers told him so; he was encouraged to study hard and strive to be the best. He graduated as valedictorian of his high school class, and nobody was surprised when he won a full Ivy League scholarship.

It wasn’t just giving up the potential for an important career in Boston that still stung now, two years after being forced to drop out of Harvard Law just six months shy of graduation.

It was losing Carol.

He probably shouldn’t have assumed she would accept his impromptu marriage proposal.

But he’d brazenly had it all figured out: their summer wedding at the First Congregational Church, a honeymoon in the Catskills, the cozy newlywed nest they would create over his mother’s detached garage, since Grandma and Granddad had taken over his old bedroom when he left for Harvard.

“You want me to marry you and live in a garage like… like a nobody?” Carol had asked in disbelief.

“Not
in
a garage.
Above
a garage.”

He was still down on one knee at that point. But it didn’t take him long to get up. Get up, and start walking.

Here he was, two years later, living alone over the garage of his mother’s house on Chestnut Street in Glenhaven Park.

Last he heard, Carol married some Harvard Law School grad and was living in a Back Bay townhouse. A somebody, as she always wanted to be.

Jed supposed he had plenty of things to be thankful for this Thanksgiving. Not marrying a self-centered social climber probably should have been one of them.

Yet he couldn’t help but think he was wasting his life as a small-town bachelor, running his late father’s five-and-dime, feeling like a glorified soda jerk. At one point or another he had dated most of the available gals in town and fallen in love with none of them, although several reportedly had their sights set on him.

01 - Honour of the Grave by Robin D. Laws - (ebook by Undead)
Heiress by Janet Dailey
RIDING WITH THE COP (The Pleasure Of His Punishment) by Scott, J.S.
El coleccionista de relojes extraordinarios by Laura Gallego García
A Heartbeat Away by Palmer, Michael
Bound By Her Ring by Nicole Flockton
On Monsters: An Unnatural History of Our Worst Fears by Asma, Stephen T.
Mi primer muerto by Leena Lehtolainen
Dirty Deals: Olesia Anderson Thriller #1 Free Epub Edition by D. D. Marks
A Girl's Best Friend by Jordan, Crystal