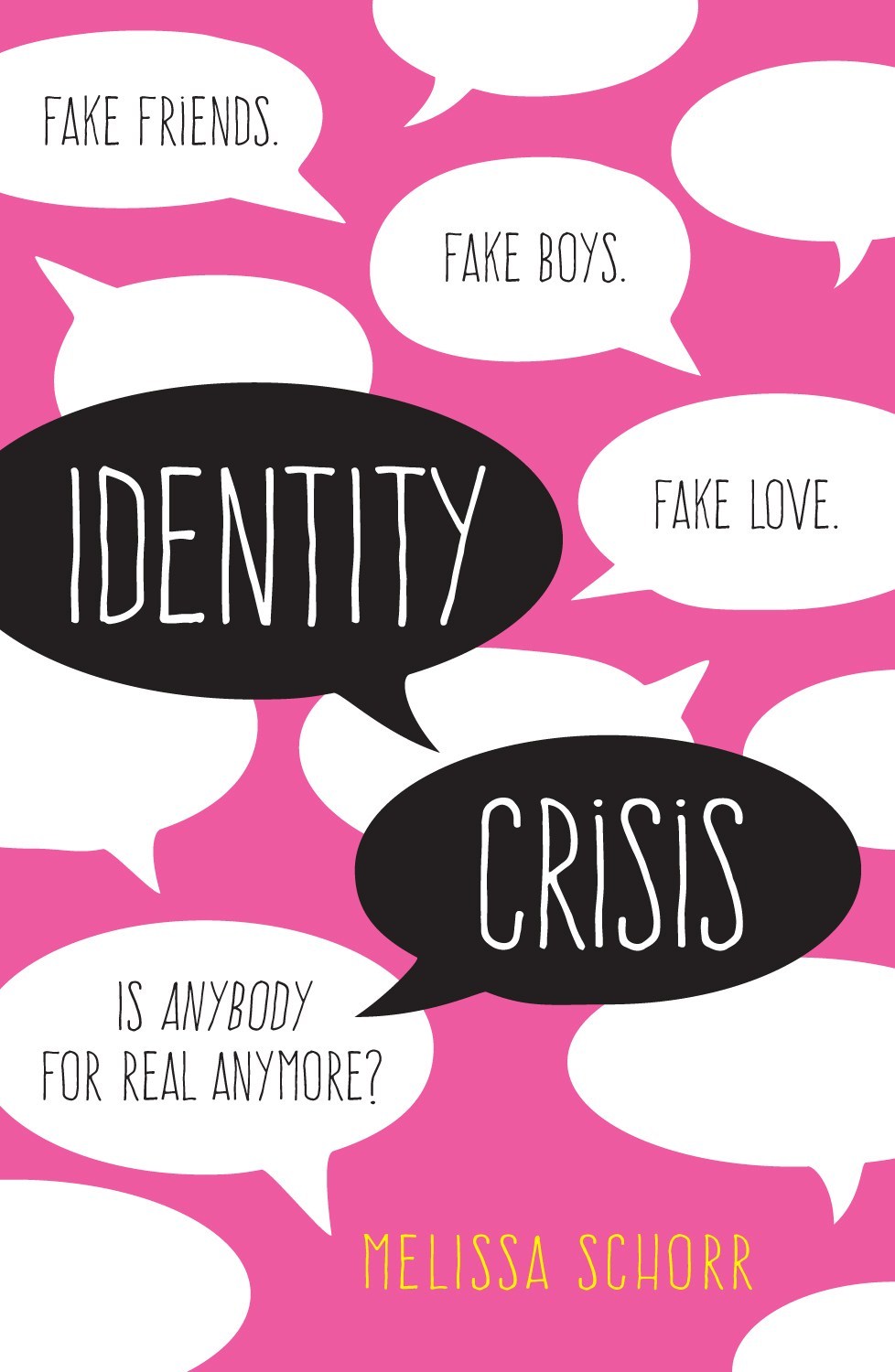 This book, or parts thereof, may not be reproduced in any form without permission from the publisher; exceptions are made for brief excerpts used in published reviews.

This is a work of fiction. Names, characters, corporations, institutions, organizations, events, or locales in this novel are either the product of the author's imagination or, if real, used fictitiously. The resemblance of any character to actual persons (living or dead) is entirely coincidental.

Many of the designations used by manufacturers and sellers to distinguish their products are claimed as trademarks. Where those designations appear in this book and F+W Media, Inc. was aware of a trademark claim, the designations have been printed with initial capital letters.

I was standing, oh so appropriately, in the middle of Disney World when I received the magical words from Jacquelyn Mitchard that she wanted to publish this book, so, yes, dear reader, dreams can come true. Thanks to her and the whole team at Merit Press, including Deb Stetson, publicity manager Bethany Carland-Adams, designer, Sylvia McArdle, for the beautiful cover, and Stephanie Hannus for the keen copyedit. Thanks to my savvy agent Jackie Flynn, who was willing to take the leap with me into a fresh new partnership. And of course, a shoutout to the inspirational Stephanie Gertz, whose invitation led to a chance conversation with Meredith O'Hayre, who made it all happen.

Time is a writer's most precious resource, and Justin Ahern, Deb Dunn, and the Noepe Center for Literary Arts on Martha's Vineyard gave me a pinch-me-I-must-be-dreaming giftâa glorious week in August on the Cape to complete the manuscript, alongside a talented group of children's writers. I am also fortunate, after irrationally holding out for so long, to have landed in the critique group I did, with the amazing moral support and sharp feedback from Monica Tesler, Marilyn Salerno, Julia Flaherty, Lisa Rehfuss, and Debbie Blackington. Thanks to Rebecca Fredey for serving as my honorary teen beta reader. And a shout out to my supportive colleagues at the
Boston Sunday Globe Magazine
, who graciously let me wear two writing hats.

Much love to the entire Cohen clan: my in-laws Jeff and Maureen, Eric, Brian and Dan, and my sanity-saving sister-in-spirit Stephanie Cohen. And always, to my supportive family, my exceptional mom, Thelma Grossman, and my dearly missed dad, Seymour, whose warped sense of humor lives on in everything I write. To my two dazzling girls, Alexa and Charlotte: Thank you for letting me keep pursuing my dream, and may you always keep pursuing yours. And forever gratitude, a second time, to my husband Gary. Even when I lost faith, you always believed.

Cooper Franklin thinks that just because I'm staring at the clock on the wall, I didn't notice him sneak a peek at my boobs. But I did. I totally did. Didn't anyone ever teach this boy the concept of
peripheral vision
?

I half-want to call him on it and give him a piece of my mind, but I decide I better not. Ms. Pinella, our tenth grade math teacher, has just partnered us up for today's lesson on probabilities, reaching into her bag of teacher tricks for a gimmick guaranteed to get our attentionâespecially during fourth period, the last class before lunch.

She'd tossed each team an unopened package of M&M'S and told us to start by tallying how many of each color are in a given bag. For a nanosecond, it feels like an end-of-the-year party, especially when loudmouth Tyler Walters calls out, “Can we eat the candy afterwards?” and Ms. Pinella laughs, “Yesâso long as you get all the answers right.” Then, naturally, she hands out a worksheet full of mind-numbing questions:

Cooper grabs the bag, full of enthusiasm, and starts sorting the candy into little piles on his desk, while I flip open my notebook, ready to mark down how many of each color we have.

Still, there's no way my brain can concentrate because in T-minus five minutes, concert tickets will go on sale to the all-time, most awesome rock band, ever, ever, ever, to hit the States, since the Beatles, the Rolling Stones, and the Sex Pistols combined. I'm talking, of course, about Brass Knuckles, who will be playing Boston's Agganis Arena two weeks from today in their first-ever U.S. tour. And even though my mom swore up and down to Sunday she wouldn't forget to call Ticketmaster right at noon today, do I trust her? No way, JosÃ© OlÃ©. Not with something this essential. I secretly programmed an alert on her iPhone, with an alarm set to go off exactly . . . three minutes from now.

My eyes are Super Glued to the regulation black-and-white clock up on the wall, watching the sweeping second hand count down to the moment when those golden tickets are safely mine. I can imagine myself at the concert, singing along with 10,000 other Knucklies to the lyrics of their breakout hit, “Identity Crisis.”

“You see me, Baby

And I see you

But perception can be so untrue

Why'd you have to leave me to my own devices?”

I can't stop fantasizing about The Moment. It's Viggo Witts's trademark move; I've watched him do it in countless YouTube videos. He strolls into the audience, plucks one lucky girl out of the crowd, pulls her on stage, and serenades her. Then, they sing the last chorus together, as a duet. Not like my voice would ever get me voted the next American Idol, but who cares? When I'm at that concert, Viggo will look out into the sea of girls, just know I'm his most devoted fan ever, and choose me. He'll lead me on stage, and even though we'll be watched by an arena full of people, it'll feel like it's just the two ofâ

I jerk at having my daydream so rudely interrupted. I realize Cooper has just said something to meâand I have no idea what.

“Hel-lo? Annalise Bradley, are you there?” Cooper is peering at me. “That's seven yellows,” he repeats patiently, pointing to a pile of yellow M&M'S on his desk.

“Sorry,” I sigh. Sad but true, I am here, not where I really I want to be: in a private jet with Viggo and the guys, who I happen to know from following their tweets are flying down to San Fran for tonight's show right this very minute. “Seven yellows.” I jot it down in my neatest handwriting, which isn't exactly all that neat.

“Ten blues. Eight oranges. Got that?”

“Got it.” I make a big point of tilting my notebook in his direction so he can see for himself.

Pleased to finally have my undivided attention, Cooper grins at me, patting his belly. “I'm starving. Think Pinella would notice if Iâ” he scoops up the small pile of red M&M'S and cups his hand toward his gaping mouth.

“Cooper, come on!” I shriek, pressing my fingers into his arm, which I can't help but notice is more muscular than I'd expected. “We haven't finished counting those yet!” I'm pretty sure he's just messing with me, but I can't take the chance. I'm not some numerical savant like Little Miss “Brainiac” Noelle Spiers over there, and don't want to blow this assignment because he's having a mid-morning snack attack.

“Kidding, Bradley. Jeez.” He laughs and gently spills them back onto the desk. “Although, if I were to eat just one, it would be . . . this one.” He plucks out a green M&M and holds it lasciviously between his thumb and index finger. He leans toward me, close enough that I get a whiff of something sickeningly sweet. Cologne? Conditioner? Raging pheromones? “You know what they say about the green ones, dontcha?”

I can't help but snort, half in laughter, half in disgust. “Funny.” I roll my eyes at him. Cooper is cute and all, with his wavy brown hair and green eyes and Zoom-brite smile, but he totally knows it, which kind of cancels it out, in my opinion. Elementary math, right? And I still haven't forgiven him for the sneak peeks, either.

Not like that makes him any different than all the infantile boys at Dansville High. Chest-obsessed, every single one of them. Ever since I developed these darn “floatation devices,” as Tyler Walters chortled at Amanda Gerard's pool party the summer before seventh grade, the entire male species has treated me differently. Oh, sure, their mouths still talk to me, Annalise Bradleyâfive-four, curly reddish hair, hazel eyesâbut inevitably, their eyes slip southward, as if my brain is too dumb to notice.

The guysâand honestly, even the girlsâat my school all assume that just because you look a certain way, you act that way too. Which is So. Not. True. It's not like I vamp around in V-necked rhinestone bustiers like a Real Housewife, or post multiple selfies of me in a bikini daily, like the desperates in one of Tori D'Fillipo's online beauty contests. No, every morning, I cram myself into a curve-flattening compression bra from Macy's, like I'm Mulan trying to pass for a Chinese warrior, and slap a Knucklie T-shirt and a hoodie on top. Still doesn't matter. The rumors that spread about what happened between me and Amos Landry at last year's Freshman Fling didn't help any, that's for sure.

Thank god for my best friend, Maeve, who's model-tall and string-bean skinny. She says that boys are just pigs and girls are just jealous, and that if she had my boobs, she would use them for world domination.

“Final tally?” Cooper asks, crumpling up the empty M&M'S bag and shooting it at the wastepaper basket in the corner without Ms. Pinella noticing. Score.

I point at my notebook.

Fable: Blood of Heroes by Jim C. Hines
An Accidental Man by Iris Murdoch
Behind Hitler's Lines by Thomas H. Taylor
The Art of Submission by Ella Dominguez
Body Language: 101 by Hanif Raah
Weave of Absence by Carol Ann Martin
The Witches of Karres by James H. Schmitz
More Than This: Contemporary Christian Romance Novel by Stallings, Staci
Soldier's Daughters by Fiona Field
Come the Dawn by Christina Skye