I LOVE LUCY (The Bachelor Pact) 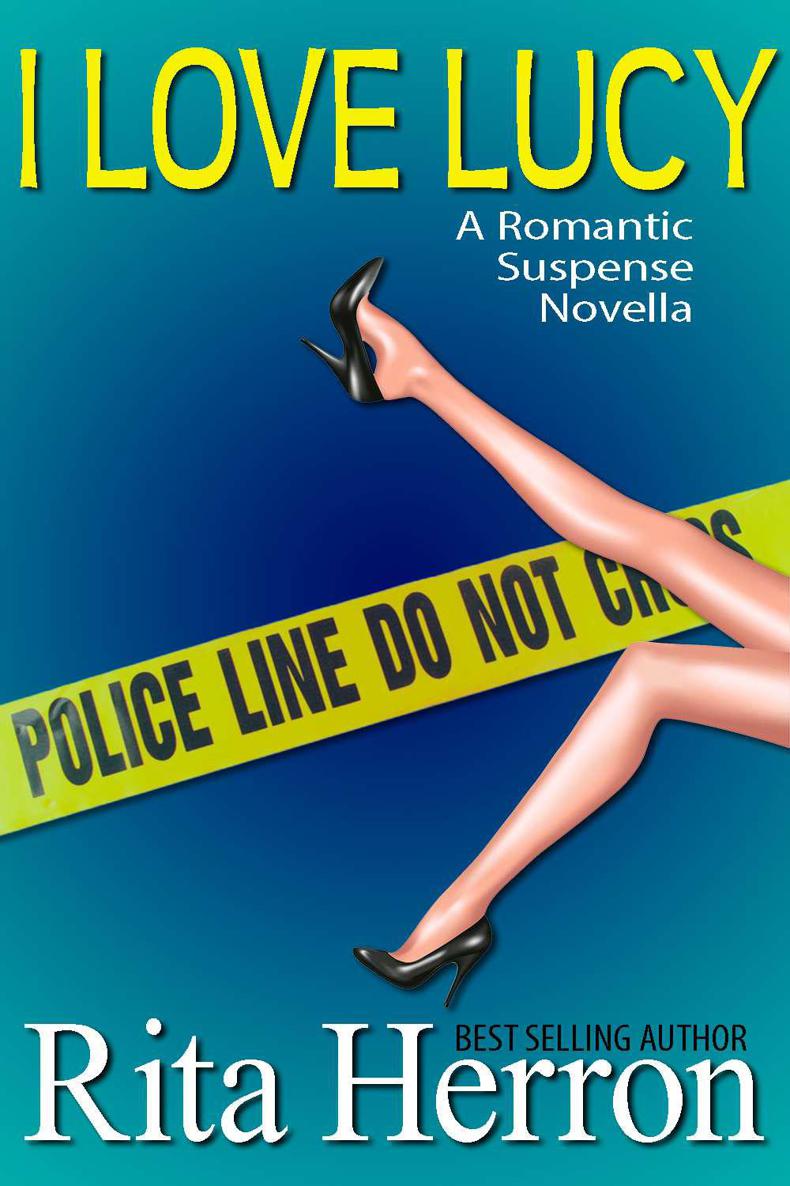 Other Books by Rita Herron

All rights reserved. No part of this book shall be reproduced, stored in a retrieval system, or transmitted by any means, electronic, mechanical, photocopying, recording, or otherwise, without written permission from the publisher. No patent liability is assumed with respect to the use of the information contained herein. Although every precaution has been taken in the preparation of this book, the publisher and authors assume no responsibility for errors or omissions. Neither is any liability assumed for damages resulting from the use of information contained herein.

This is a work of fiction. All incidents and dialogue, and all characters with the exception of some well-known historical and public figures, are products of the author’s imagination and are not to be construed as real. Where real-life historical or public figures appear, the situations, incidents and dialogues concerning those persons are entirely fictional and are not intended to depict actual events or to change the entirely fictional nature of the work. In all other respects, any resemblance to persons living or dead is entirely coincidental.

All Emmet Roach wanted for Christmas was to break out of jail.

Well, that and to be with the woman he loved.

She was going to be so surprised when he showed up at her door. Maybe he’d wrap himself in a big red bow and drape tinsel all over his body!

Yep, that stupid restraining order hadn’t kept him away.

And prison wouldn’t either.

His plan was already set. He’d faked a suicide attempt by trying to strangle himself with the garland some idiot guard at the prison had hung in the dining hall to make the room look more festive. Now the doctors had checked him out, he was riding in a prison minivan on his way back to his cell.

His heart raced with excitement and anger as he envisioned Lucy the last time he’d seen her.

He’d tried to convince her that he loved her, that he couldn’t live without her, but she’d testified against him and claimed he was stalking her.

This time he would make sure she understood the difference. He wasn’t a stalker, he just felt love more intensely than others.

The sound of an engine revving up made him glance in the rearview mirror. His buddy was right on time.

Phase two of his plan was about to begin. The breakout.

He braced himself as his buddy’s car roared up, then rammed into the back of the mini-van. The driver cursed, swerved to the right to avoid an oncoming car and struggled to right the vehicle, but his friend rammed them harder and the van’s brakes squealed.

The driver lost control, the van skidded, then hit the guardrail and rolled.

Emmet gripped the seat edge to brace himself, but his shoulder jerked with the force of metal hitting asphalt. Then the van skidded upside down into the ravine and careened to a stop against a boulder with a sickening crunch.

The driver’s head lolled forward, blood trickling down his forehead. A second later, the van door opened and his friend hauled him through the door.

The driver was trying to rouse, but his buddy whipped open the driver’s door, jerked the keys from the key ring on his hip, then unlocked Emmet’s handcuffs.

The sweet smell of freedom engulfed him as he tossed the cuffs to the ground and ran toward his buddy’s car.

They tore away from the scene, leaving the driver to fend for himself.

“Thanks,” he mumbled as a siren wailed past heading toward the wreckage.

A few minutes later, when they both finally stopped checking over their shoulders for the cops, his friend slid a scrap of paper toward him.

Emmet’s pulse pounded. “You found her?”

“Yep. She was doing Vegas shows but hooked up with some builder named Reid Summers. Guy and his brother own a construction business in Savannah, Georgia.”

Anger churned through his belly. His Lucy was shacking up with some creep after he’d waited for her for the past year?

“Are you sure you want to look her up?” his buddy asked. “You finally got your freedom.”

This time Lucy wouldn’t get away from him.

She loved him, he
knew
it.

He just had to remind her of that fact. Then she would forget the hammerhead and be with him where she belonged.

Maybe they’d even make a baby this Christmas.

And no one would ever tear them apart again.

Yes, it was beginning to look a lot like Christmas
...

Reid Summers counted the peppermint sticks in the Christmas countdown calendar Lucy had hung above her bed. Six peppermints left.

Only six days until Christmas.

And he still had no gift.

What in the hell was he going to get Lucy?

She made a cat-like purring sound in her sleep, then rolled over, and he turned on his side to look at her. He loved watching her sleep.

Hell, he loved watching her do anything.

Her fiery red hair lay in a sexy tangle around her face, her lips were swollen from his kisses, and her naked body with its soft curves…looked absolutely delicious.

Damn, he had it bad.

He had never been in love before, but Lucy had blindsided him, and he’d fallen hard and fast for her.

He twirled a strand of her hair around his finger, then pressed a kiss to her cheek. Lucy was surprisingly sweet, funny – and a sex siren whose shocking exotic Vegas showgirl dance act had tied his body in knots the first time he’d seen it. Then last night she’d brought out the sex toys she sold with her Sleepover Inc. business and man, oh, man.

He was sore in places that had never been sore before.

Of course he hadn’t known quite what to do with a couple of the contraptions, but hey, he
was
teachable.

Lucy had given up the show life though and was looking for acting jobs, but the image of her in feathers and boas gave him a hard-on every time he thought of it.

Reid’s chest pumped up a notch. “Last night was spectacular.”

Lucy nodded, then laid a big lip-lock on his mouth. But her cell phone rang a moment later, interrupting them.

“Don’t answer it,” Reid whispered. “We’ll stay in bed all morning, then go to lunch at that shrimp place you like on River Street, then pick up a Christmas tree.”

For a brief moment, he considered shopping for an engagement ring to put in her stocking, but he wasn’t sure he was ready to go
that
far.

After all, sharing a Christmas tree was sort of a commitment.

Lucy threw the covers aside and reached for her phone on the nightstand. “Sounds wonderful, but this might be my agent.”

Reid frowned. He didn’t want to lose Lucy to L.A., but he couldn’t very well balk at her career choice. He had to be loving and supportive or he’d lose her.

And losing Lucy made him itchy, like he was going to break out in hives.

A small frown puckered Lucy’s brow as she studied the number on the caller ID screen. Then she slid from bed and headed to the bathroom. “Be right back.”

Reid watched her sashay into the bathroom, already missing her sexy little tush.

Being in a relationship was completely foreign territory to him. His sister Maddie had given him pointers, basically her ten rules to please a woman, so he wouldn’t screw up. But he’d frozen up around rule two when she suggested he forget about Sunday afternoon football and give Lucy full reign over his remote.

After all, he was still a bachelor.

In fact, he and his brother Lance and their best friend Chase made a bachelor pact a few years ago, and Lance and Chase had broken the pact when they’d gotten drunk enough on lust and love to get hitched.

His body shuddered as he pictured himself in a monkey suit walking down some aisle and saying words like
forever
. Could he really do it?

Make a commitment to Lucy?

Shoot, what was wrong with him? He
had
made a commitment to her. They were
exclusive
.

Committing didn’t have to mean marriage, did it?

Lucy shivered as she closed the bathroom door and answered the call. The man on the other end of the line was the last person she wanted to hear from.

It couldn’t be good news.

She leaned against the bathroom sink and sighed. “Yes.”

“What is it, Wallace?”
The two words she’d dreaded hearing the past two years echoed back. “He escaped.”

Oh, God. “How?”
“A van crash. Looks like a set up.” Wallace sighed in disgust. “Apparently he faked a suicide attempt, was sent to the hospital and was being transported back to jail when it happened.”
Lucy chewed her thumbnail. Emmet Roach had made her life a living hell before she’d finally convinced the police that he’d been stalking her. First, he’d befriended her at a Vegas show and she thought he was harmless.

An autograph here. A chance meeting at a coffee shop.

Then it had gotten weird. He’d started following her, sneaking into her apartment and dressing room, stealing her wigs and boas and underwear.

Wearing
her wigs and boas and underwear.

He’d taken it a step farther by trying to kidnap her from a spa when she was getting a bikini wax.

Not only had it been embarrassing, but he’d walked in and told the salon worker exactly how he wanted her landscaped.

She shivered again. He liked his women bald like a baby.

Not that
that
bothered her, but no man told her what to do.

“Lucy,” Wallace said. “I know this is not good, but we will find him.”

Tears burned the backs of Lucy’s eyes. If Emmet had gone to such drastic lengths to escape, he would find her.

“But, Lucy, I think you should go in hiding until we do.”

Lucy looked out the window at the Christmas tree lot across the way. Reid was naked and in her warm bed where she wanted to stay. She thought they might shop for a tree together later like a real couple.

Sophie had worked hard to build a new life with Reid’s brother Lance.

None of them knew about her situation. About Emmet.

What if he came after one of them to get to her?

“I understand,” Wallace said. “We can put you in a safe house.”

Lucy’s claustrophobia set in. “I can’t be locked up twiddling my thumbs. I’ll go crazy.” Especially during the holidays when she wanted to be with Reid and her family. And she still had presents to buy!

Besides, since her mother Deseree had quit stripping, attended cosmetology school and started styling wigs for the drag queen show in Savannah, she and Sophie had tried to get together with her at least once a month.

She’d also hoped for a special gift from Santa this year.

“All right. We’ll work something else out.” Wallace wheezed a breath. “I’ll meet you in the Savannah Square in an hour.”
Lucy grimaced. A half hour ago, she’d been in blissful heaven with Reid. She wanted to run into his arms now.

But she couldn’t tell him what was going on.

Knowing him and his macho overprotective brother, they’d play Tarzan, beat their chests and hunt down Emmet themselves.

Licked (Devoured #1) by Hazel Kelly
Monterey Bay by Lindsay Hatton
The Coincidence 03 The Destiny of Violet and Luke ARC by Jessica Sorensen
Out of the Blue (A Regency Time Travel Romance) by Kasey Michaels
Poirot and Me by David Suchet, Geoffrey Wansell
Tales From the Black Chamber by Walsh, Bill;
Dorothy Garlock - [Wabash River] by River of Tomorrow
Hero's Song by Edith Pattou
ARC: Assassin Queen by Anna Kashina
Sanctuary by Nora Roberts