Read I Know My First Name Is Steven Online

I Know My First Name Is Steven 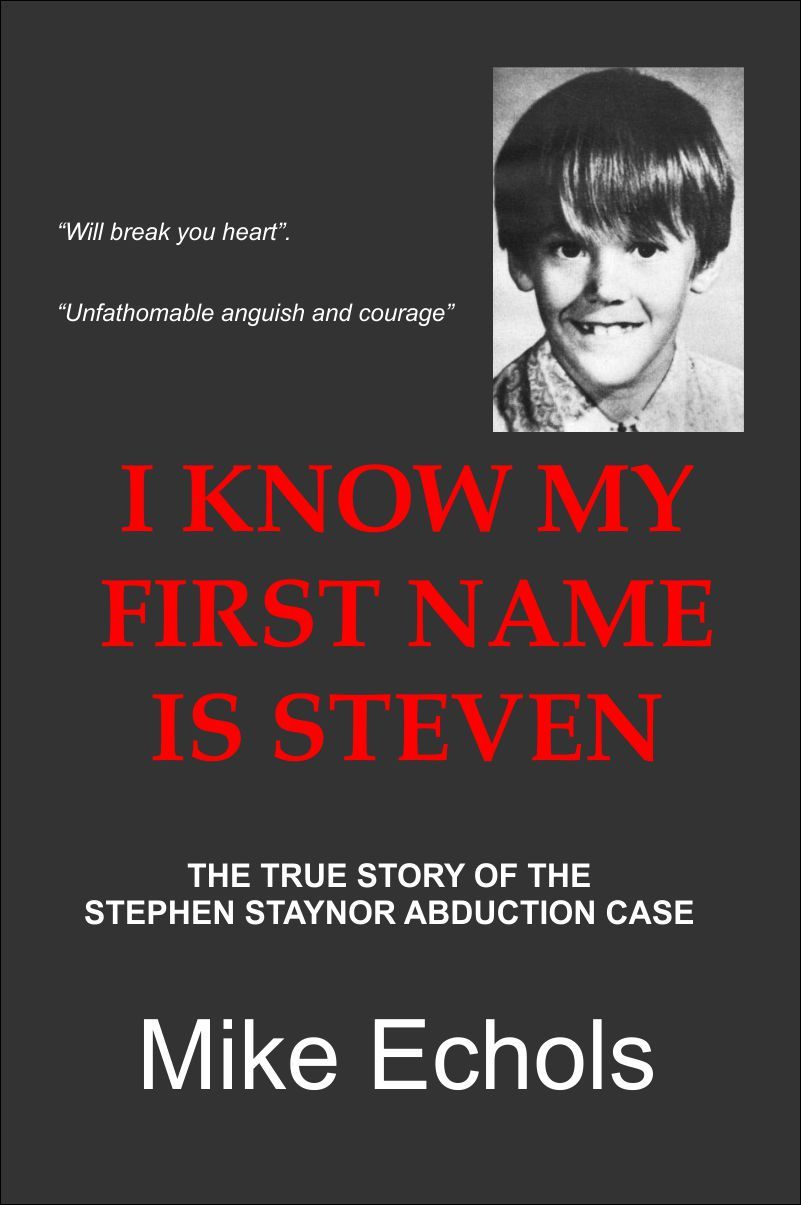 I Know My First
Name Is Steven

I Know My First Name Is Steven

This book is dedicated to my loving mother, Anne Brown Echols, and to the memory of my loving father, Walter Harlan Echols, both wonderful parents who had great faith that I could indeed write this.

. . . And to the memory of Steven Gregory Stayner, an exceptionally courageous and remarkable young man, whom I will never, ever forget.

. . . And to the memory of the thousands of children who have been kidnapped, sexually assaulted, and murdered, a few of whom were:

. . . And to the thousands of children, still missing today, in the hope that they may be found, alive and well, some of whom are:

I could never have written this book without the monumental help I received from Steven himself. He trusted me completely with his innermost thoughts, fears, feelings, memories, and details of what happened to him before, during, and after his kidnapping. And my task would have been almost impossible had I not received the help that I did from Steven's devoted father and mother, Del and Kay, as well as his, brother and sisters, Cary, Cory, Jody, and Cindy. Also, I am grateful for the time and information which was freely given to me by Timmy White and his parents, Jim and Angela.

Since 1984 my eyes and ears for events related to this story, past and present, in Merced, California, have been that city's former police chief, Harold Kulbeth, and I thank him most sincerely. And my research was aided immeasurably by Parnell's appeals attorney, Daniel Horowitz of Oakland, California, who gave me complete access to his files and copies of transcripts of Parnell's trials and hearings.

Also, I am extremely indebted to my close friend and confidant, Norman O. Milford, for his extensive editorial help, to my literary agent, Natasha Kern, for her championing of my work, and my editor at Zebra Books, Paul Dinas, for his availability and professional counsel.

Trained and educated as a social worker and journalist, I spent thirteen years counseling emotionally, physically, and sexually abused children for several different residential programs. Indeed, my college thesis was on the subject of sexually abused boys.

When news of Steven's kidnapping broke in late 1972, I felt moved to send a card to his mother, Kay, expressing my concern about her son's kidnapping and assuring her of my prayers.

Beginning in 1973 and continuing for almost ten years, I served as an avocational therapeutic foster father at different times to five different emotionally, physically, and sexually abused boys between the ages of ten and fifteen. My experiences trying to be a surrogate father to these boys and my frequently thwarted efforts to get counseling for them reinforced my interest in and concern for sexually abused children.

On March 1, 1980, I flew from Houston to San Francisco to spend a week's vacation with a woman I knew who lived in Marin County, just across the Golden Gate Bridge. That same night, about a hundred miles north of me, Steven Stayner and Timmy White hitchhiked into Ukiah, ending Steven's seven-year-and-three-
month kidnapping (the longest stranger-abduction of a child with a safe return in United States history) and Timmy's two-week kidnapping. For two days the front pages of the San Francisco Bay area newspapers were filled with little else.

On March 4, 1980, Steven and his parents, Del and Kay, appeared on ABC-TV's
Good Morning America
from ABC's affiliate in San Francisco, KGO-TV. My friend and I watched the program over breakfast before we drove into San Francisco. She had a business luncheon, and I began the day by exploring Fisherman's Wharf.

While strolling about, I spotted Del and Kay Stayner standing side by side and attempted to photograph them with the zoom lens on my camera. I waited patiently for a teenage boy with his back to me to move so that I could take the picture. When I snapped the shutter, Del and Kay noticed me and I walked over, introduced myself, and began chatting with them. I was surprised when they told me that the teenage boy I'd seen was Steven, and that he had gone off to eat lunch at McDonald's with his little sister, Cory.

We went upstairs for lunch in a local seafood restaurant. Soon, Steven and Cory returned and joined in the conversation. Before we parted, I also took pictures of Steven and Cory, and Kay and I exchanged addresses and phone numbers.

The following summer, on my way to go backpacking in Yosemite National Park, I spent several hours at Kay's invitation visiting with the entire family at their home on Bette Street in Merced, got to see Steven's scrawled signature on the garage wall for the first time and met Queenie, Steven's beloved Manchester Ter
rier, which Parnell had given him. Before I left that day Kay surprised me by showing me the card which I had sent to her shortly after Steven was kidnapped.

By early 1984 I had moved to Colorado and made a career change from social work to journalism. One of my first writing assignments for the small weekly newspaper for which I wrote was a series of articles about missing and sexually abused children.

The March 19, 1984,
Newsweek
carried an article about Steven and his parents which told of their displeasure with all the proposals from authors and movie and television producers to write or film Steven's story. This prompted my editor to suggest that I consider writing a book about the kidnapping, and after a great deal of prodding I phoned Del and asked him if I could do this.

Less than a week later, Del called me back with his family's unanimous approval that I be given exclusive rights to Steven's story in return for a small percentage of any monies I earned from writing it.

In June 1984 I made my first book-related trip to California and spent five weeks doing research and traveling with and interviewing Steven, his family, and scores of others. During the rest of 1984 I made three more such trips.

Even though Parnell at first granted my request to access his defense attorney's files for both trials (i.e., trials for kidnapping Timmy White and for kidnapping and conspiracy to kidnap Steven Stayner), he changed his mind when he learned about my exchange with attorney Scott LeStrange concerning the truth-serum tapes and reneged before I was able to
get any information from either Attorney LeStrange or John Ellery.

However, since Parnell's accomplice, Ervin Edward Murphy, was tried with him, LeStrange and Ellery supplied copies of most of their files to Murphy's attorneys, Wayne Eisenhart and Neil Morse, who in turn—with the signed permission that Murphy gave to me—provided me with complete access to these files and Murphy's files, a veritable treasure trove of information about Parnell.

On my last research trip to California in December, 1984, I was able to interview the imprisoned kidnapper himself twice, the only interviews Kenneth Eugene Parnell has ever granted.

In its manuscript form, this book was the basis for the 1989 Lorimar/NBC Television miniseries of the same title—for which I was also the technical consultant—and is the result of nearly one hundred fifty hours of tape-recorded interviews with thirty-seven different people (including forty-four with Steven himself), widely varied information provided by a score of others, and reading and condensation of over five thousand pages of hearing and trial transcripts.

It was a time in which the nation faced enormous challenges: the end of a war, a crisis of confidence in government and our most cherished institutions, a period of economic uncertainty, terrorism, and the taking of American hostages around the world. We were shaken and preoccupied. We questioned our future.

For generations Americans had pointed with pride and confidence to our children as the future of the nation. We cherished them. We protected them. We nurtured them in order to ensure that the world of tomorrow would be far better than our world today. Or did we?

It was also a time in which we discovered another side of ourselves. We began to discover the victimization of our children, referred to in the title of a well-known book of the period as
hidden victims.
We saw evidence of their vulnerability to abuse and exploitation, to abduction and molestation, to injury and death.

What roused Americans to this unseen crisis in our midst? While there were many dedicated professionals and advocates who labored for years in the crusade to protect children, I submit that fundamentally it was
the children themselves who awakened the nation—the hidden victims and the victim families who said "enough"—who triggered a sustained period of local, state, and national action.

The names and images of the period are burned into the conscience of an entire country—Adam Walsh, the six-year-old Hollywood, Florida, boy abducted from a shopping mall and murdered; Etan Patz, the six-year-old New York City child who disappeared on his way to school and is still missing today; Ann Gotlib, the twelve-year-old Russian-Jewish immigrant girl still missing from Louisville, Kentucky; Yusef Bell and the twenty-eight other missing and murdered children of Atlanta; the thirty-four young boys who were victims of John Wayne Gacy in Chicago; and countless others.

Yet there is no story of greater impact, nor one which offers more important lessons and challenges for families and institutions, than the story of Steven Gregory Stayner. It should not require the story of a victimized child to provoke action. Yet there can be no question that Steven, Adam, Etan, the Atlanta children, and many others were catalysts for a movement, and that their legacies are the fundamental changes taking place in virtually every community.

What did Steven's story teach us?

It taught us the vulnerability of children. Steven Stayner confronted us with the reality that there are those in our society who prey on children, who seek out legitimate access to children in order to victimize them. We do not need to live in fear, but we need to be cautious. We need to be sure that our children understand that they have the right to say No and that
they are empowered to tell the parent, teacher, or trusted individual if they feel uncomfortable about something happening in their lives. Steven showed us that even children in a loving, caring family can be vulnerable, and that everyone must be prepared.

It demonstrated for us the manipulative power of the pedophile and his ability to control the child. He helped us to understand why many children who are victims do not come forward and why they believe people other than their parents. Child victims feel alone, isolated, and dependent. They respond to small kindnesses, find comfort in acts that suggest normalcy, and seek to adapt to their changed, troubled new world.

The Memory Thief by Rachel Keener
The Rising of Bella Casey by Mary Morrissy
Razor's Edge by Sylvia Day
Beyond These Hills by Sandra Robbins
Baby Be Mine by Paige Toon
Civilian Slaughter by James Rouch
Off Her Rockers (Loving All Wrong #3.5) by S. Ann Cole
Just Another Day by Isaac Hooke
Revelations by Paul Anthony Jones
The Sunflower Forest by Torey Hayden