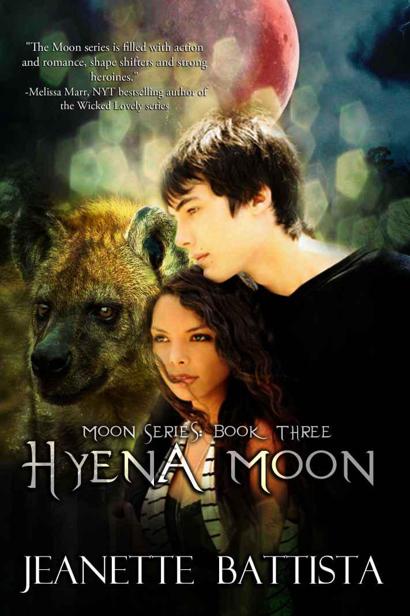 This ebook is licensed for your personal enjoyment only. This ebook may not be re-sold or given away to other people. If you would like to share this book with another person, please purchase an additional copy for each recipient. If you’re reading this book and did not purchase it, or it was not purchased for your use only, then please return to Amazon.com and purchase your own copy. Thank you for respecting the hard work of this author.

Discover other titles by Jeanette Battista at Amazon.com:

The big white house was quiet. It exuded silence like a tomb, or maybe a dentist's office. It was late morning and Rafe stood looking out the window of the room where he slept. He couldn't call it his bedroom; that didn't feel right. He certainly wasn't a guest here--a hostage, maybe; a prisoner, perhaps; an inconvenience, definitely. But then, he didn't expect much from Kess, the wereleopard clan leader who had been saddled with him unexpectedly. No one had expected his mother to just dump her youngest and walk away not knowing if they'd kill him. They also didn’t realize that his mother would probably be grateful to have been saved the hassle of doing it herself.

The view he had wasn't much, just the backyard and a sliver of the guest cottage, but it was better than anything he had at home. At the thought of home he frowned, the scars on the right side of his face still pulling tightly even though it had been three years since he'd received them. He'd been thirteen when his mother, Samara, had ripped his face open for speaking when she'd expected silence from him.

He knew before he'd come to Miami with his mother that this was his last chance with her; his last chance to prove that he could do something for his pack of werehyenas other than suck up its resources. She hadn't said as much outright, but Rafe knew that his mom was looking for an excuse to get rid of him. It had bothered him when he'd first left for Miami, because only someone deeply disturbed wouldn't care that their mother was maybe trying to kill them off, but he'd made his peace with it.

Or so he'd thought. But now he was driving himself crazy with it. He'd done a good job down here for her: he'd been the one who'd scoped out the presence of the Eaters, the werejackal assassins helping Kess; he'd been the one to keep his head and help his mother salvage something out of the failed assassination attempt on Kess in the nightclub. His sister, Teresa, had been the one who screwed up, who went against orders, who threw a monkey wrench into the gears of their mother's well-oiled plans.

Yet here he was and Teresa was safe at home. None of this was fair.

He could always leave. There was nothing keeping him here, and while Kess hadn't killed him yet, he couldn't be sure when she might change her mind. Still, weres on their own didn't last long. It was dangerous going it alone in strange territories, with no one to back you up or to lean on for protection. There was safety in numbers; lone weres were almost always looked on with suspicion.

And then there was the problem of his packmates. With his mother abandoning him, they could attempt to improve their standing in the pack by killing him themselves. If they thought Samara wanted him out of the way, then they would think there was something to gain by bringing his horribly mangled body back to her as a way to prove their loyalty. Yeah, not something he wanted to dwell on.

Rafe paced the confines of his room, trying to wrap his head around all of it. He was pretty sure he'd proven he had worth to the pack. Hadn't he? His mind shied away from the idea of his mother really not caring about him, that she'd truly abandoned him. That she'd actually left him behind to die. He wouldn't accept that—he couldn't. She might not be in the running to win mother of the year, but she wasn't a monster. There had to be something else going on, something more, something he was missing.

While his feet tracked off the same route from bed to window to door to closet and back to bed, his mind tried to find new patterns. His mother still needed to know what was happening in Miami. That much hadn't changed. Rafe was now perfectly placed to give Samara the information that she'd need to plan her takeover of the wereleopard clan’s territory.

He stopped, letting his mind run through the possibilities. Maybe that's what she'd been going for all along. Perhaps she'd been counting on Kess being soft-hearted enough to take in a stray. It didn't explain why he wasn't told about Samara's plan, but then again, his mother wasn't terribly forthcoming with her business. And for a con like this to work--if con it was--he had to be believable in his confusion and fear.

He had at least proven that he was better at following orders and being observant than Teresa. It made sense that he'd be a better spy—Teresa didn't exactly scream vulnerability—even if he didn't know what his mother was doing. A small voice inside him reminded him that if he failed, Samara still came out ahead because she hadn't wasted an important resource. He told that voice to shut up. If his mother was playing things out this way, it would explain her leaving him here. It meant she had a plan for him too.

There were times he was sure he hated his mother. He'd felt it boil inside him when she'd first given him the Miami assignment, and he knew she knew it. He felt it every time she'd beaten him, and after she'd clawed his face. And that was when she wasn't actively ignoring him. But there'd be times, few though they were, that he would catch a glimpse of the mother he wanted. She'd smile at him at a party, she'd talk to him about his day when there was a man to impress. It didn't matter that it never lasted very long; Rafe thought that if he just tried harder, she would look at him like that all of the time. Like how she looked at Teresa.

Rafe resumed his restless pacing, needing to do something with all of his stifled energy. There were the werewolves to think about though. If he wanted to risk spying on Kess, he'd need to take them into account. They already didn't trust him. When he'd ventured out of his room for food, they'd looked at him like he was something they'd find behind a sewer grate. The two of them seemed perfectly fine with the crazy assassin werejackals in the house but they had a problem with him--he might have found it funny if he didn't have to live with them. He knew enough after looking at them that it would be best if he stayed out of their way for the time being.

It came down to what he wanted to do, probably for the first time in his life. Did he really think he'd been put here to spy on his mother's enemies? Rafe paused and stared out the window at the grounds beyond. And, if he had been, did he want to?

Kess eyed the young werehyena where he sat like a statue on the sofa. He was in his teens, still not full grown. He was going to be tall; already he topped her 5'9" height. His build was lean, but the short sleeve shirt he wore showed the long defined muscles of his arms. He was all whipcord muscle and bone right now, a certain underfed look about him. His hair was black and shaggy. It hung in his eyes and face, obscuring the amber eyes, dark brows and the almost girlishly heavy black eyelashes. His skin was pale, white as the sand beaches beneath the moon so that it almost glowed, and it looked even whiter against his hair. He had strong, slim features, his face ending in a pointed chin.

His hair mostly hid the thick white scars that ran from his right temple to his chin. Three claws had marred the perfect beauty of his face. Kess wondered if he wore his hair long to keep people from noticing. All the werehyenas she had seen were astoundingly beautiful; this young man was no different, scars or not. In fact, she thought the scars made him more attractive--giving him an allure of danger and mystery that would make him a hit with all of the girls his age.

He'd only been in the house for a couple of days, but she'd barely seen him. He had been quiet since his mother had abandoned him here. He moved through the house like a ghost, like he didn't want to attract any notice. Kess couldn't blame him. She remembered how it was when she'd first run away from home. She'd kept her head down and did her best to be unremarkable. Attention was not something she'd been looking for then. She'd given orders to her clan of wereleopards to keep their visits to the house to a minimum to avoid spooking the young man.

"Can I get you something to drink?" she asked, nabbing a bottle of water from the wet bar's refrigerator.

He shook his head and she walked over to sit on the couch, near the end opposite him. He held a throw pillow in his lap, picking at a tassel nervously with his good hand. The other hand, broken fingers wrapped carefully, lay on the couch beside him. She folded her legs beneath her and stared at him, wondering if he was ever going to look at her. Finally, after a few moments of sitting in silence, he did.

The Real Real by Emma McLaughlin, Nicola Kraus
I Own the Dawn: The Night Stalkers by Buchman, M. L.
Vanilla Vices by Jessica Beck
Lady Renegades by Rachel Hawkins
Alpha Kill - 03 by Tim Stevens
Jade in Aries by Donald E Westlake
On A Wicked Dawn by Stephanie Laurens
Fallen (Chronicles Of The Fallen) by Morgan, Julie
In the Den by Sierra Cartwright
Intangible by J. Meyers