Read How to Seduce a Duke Online

How to Seduce a Duke 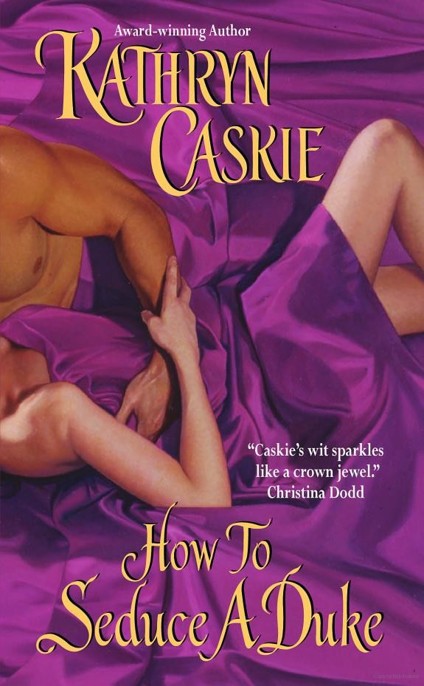 KATHRYN CASKIE
How To Seduce A Duke

who believed in me all along.

I
n the blue veil of night, three human statues stood clustered behind a prickly screen of holly bushes, their voices carefully held to mere whispers.

“He’s just
there.
” Mary, the eldest of the
Royle
sisters, poked her white, heavily powdered index finger through a gap in the branches. “Do you see him? He’s the blond gentleman before the fountain. Is he not exquisite?”

“I cannot see anything other than the back of your head.” Her younger sister Anne did not find tonight’s adventure nearly as diverting as Mary did. Since the moment they’d left their great-aunt Prudence’s house, she’d done nothing but complain about the nonsensical nature of their invasion of the garden rout next door.

But standing hidden along the hedge was perfectly logical to Mary’s way of thinking. They weren’t invited to the rout this eve... but he
was.

What else was she supposed to do? Sit in her bedchamber while he was walking through the gardens only yards away? No, she was not about to miss an opportunity like this.

Until this night, Mary had only seen the viscount five times in passing. And though she was an excellent judge of character—everyone said so—she had had to concede that she needed more time to gather a better sense of him... to be sure. For she was nothing if not decisive. And once she made a decision, she never changed her mind. Ever.

Being able to watch him from the holly bushes, undetected as she was, would allow her to confirm her initial opinion of him, even though in her heart she already knew her perception was correct. He was exactly as he appeared—positively
perfect.

Anne huffed and tugged hard on Mary’s shoulder to move her out of the way.

Snapping her head around, Mary grimaced at her sister. It had taken her a full two hours to achieve the correct marbled effect. “You needn’t be so impatient. I shall step aside if you’ll lift your hand
carefully.
”

Obliging her, Anne raised each finger in turn, then lifted her damp palm from Mary’s powdered skin.

Mary twisted to peer at the damage to her white finish. “I knew it! You’ve smudged the powder. Your fingers have left prints all over me.”

“Will both of you please lower your shrieks?”
Elizabeth
, the youngest of the triplets by almost ten minutes, according to their father, blinked her powdered white lashes angrily. “What if we’re caught? Our family will be ruined. Am I alone in considering this?”

“It’s
dark
, Lizzie. No one can see us here.” As she stood, Anne tripped on the hem of her Grecian gown, sending a puff of white powder into the air.

“Anne is right.” Mary edged around the thick bush. “But we can’t see or hear what’s going on either. I daresay we
have
to move closer.” She turned and signaled for her sisters.

It was then that she saw Anne and Elizabeth exchange loaded glances.
Oh no.
They weren’t backing out now. They
were
going through with this. They were. After all, they’d promised her. “Do not even consider leaving. This was the plan, or have you forgotten? We dress in white and powder ourselves, then invade the rout, posing as garden statuary.”

Elizabeth
huffed at that. “And as I said at the house, your scheme is madness. Though I have to admit, in the moonlight, our marbling looks flawless. The effect is really quite amazing.”

Anne flinched as she gazed down at her gleaming white arm. “What else is in this powder anyway? I feel as though ants are crawling all over me.
Lud
, Mary, I don’t know how you convinced us to do this. And why—because you’re smitten with some dashing soldier? I agree with Lizzie, this
is
madness.”

“There is an ocean of difference between a simple soldier and a war hero. Did I mention that a
viscountcy
was newly bestowed on him, by the Regent himself? It was a grand reward for his valor in battle.” Movement caught Mary’s notice. “Blast, he’s leaving. Come along, we have to catch him up. He’s probably headed for the lawn.”

Elizabeth
shook her head vehemently. “The only place I am headed is back over the wall, and into a bath to wash this coating of white powder from my person.” She came to her feet, then lent Anne a hand to help her stand.

“
Please.
Not until you’ve at least seen him. I am going to marry him, you know.” Mary finished her sentence with a firm single nod.

“So you’ve said.” Anne brushed the crumpled, dried holly leaves from the knees of her snowy gown. “But you don’t need to marry the man just to secure your future. We’ve got the entire season... and more to find the proof we need.”

Mary huffed at that. “I am not about to bank my life on such a slim possibility. I am being realistic about our prospects—and so should you.” She watched the viscount lift a glass to his mouth, saw the crystal sparkle in the moonlight, and a sigh fell from her lips. “Beginning with
that
gentleman... that beautiful gentleman.”

“Oh, very well, show me.” Anne stood on the toes of her slippers and peered over the top of the hedge. “Which one is he?”

Mary looked closer and saw that there were two men now. But while
her
viscount—because indeed she already thought of him that way:
her
viscount—had golden hair, the other man’s hair was as dark as jet, and he stood at least a head taller.

“Well, certainly not that hulking giant. My tastes are much more refined.” Mary trotted a few steps along the hedgerow and beckoned for her sisters to follow, which they reluctantly did.

She paused only twenty paces from the two gentlemen. “
There.
The one with the cane,” she whispered when her sisters drew alongside of her as she peered over the holly. “What did I tell you? Such fine, aristocratic features. Shows good breeding.”

But Mary was too preoccupied with admiring the viscount to pay her nervous sister much mind. “Such grace in his gestures—oh, and, not that it matters, but he’s got plump pockets too—ten thousand per annum.”

From the corner of her eye, Mary saw
Elizabeth
dart off into the darkness, with Anne right behind her, clumsily stumbling over vines and fallen branches as she ran.

Mary whirled around and looked back toward the two men.

Oh, no.
Now there was only
one.
And indeed, a huge, dark, shadowy figure was pushing through a break in the hedge and heading toward her.

There was no time to run.

Lord above, no time to hide.

So, being a piece of slightly smudged garden statuary, she turned her back to the hedge, then simply folded her hands before her and tried her best to appear a slab of elegantly carved marble.

No sooner had she closed her eyes than she heard his footfalls nearby, and in the next moment, Mary knew he was standing right before her.

Do not move. Do not breathe.

She heard him exhale a quick, deep chuckle.

“Damned odd place for a statue,” he muttered to himself. “Quinn, there’s a statue behind the hedge,” he called out. “Have you seen it? Quite lovely, actually. You should examine its profile. Extraordinary detail. Very realistic.”

She heard the viscount’s smooth voice coming from a distance. “Haven’t. Must be one of Lord Underwood’s recent acquisitions.”

“No, this statue does not have... um... the patina of antiquity. Come here and have a look for yourself.”

The gentleman before her didn’t move again, and Mary had the distinct impression that he was studying her... very closely. In fact, he was so near that she could feel the warmth of his breath upon her skin, and it made her tremble inwardly.

Oh perdition.
She couldn’t endure this any longer. Why wouldn’t he just go away?

She knew that although it was fairly dark behind the hedge aside from a few fingers of moonlight breaking through from above, it was more than possible that her disguise had failed.

She had to see what was happening. Had to risk it.

Slowly she raised her eyelids ever so slightly, peered through her powdered lashes and saw—a large hand stretching outward as if to cup her breast.

Good heavens. He’s not going to... oh Lord, he actually intends to touch my—

“How
dare
you,
sirrah
!” Mary’s eyes snapped fully open, and she drew back her hand and landed a stinging slap on the man’s cheek.

She’d never seen such a look of shock and utter surprise on anyone’s face before. His mouth fell wide open as he yanked back his own hand and hurried it to the powdered print she’d left on his left cheek.

Then from behind her came a hail of laughter. The viscount had obviously caned his way through the hedge as well. Mary froze in place.

“Even the garden statuary knows you’re a rake, Rogan. I vow it should be very clear to you by now that there’s no escaping your reputation, brother, no matter how hard you try.”

Oh God. The viscount was directly behind her.

There was no way this eve could have turned out any more disastrous. None at all.

Mary angled her face away. She could not let the viscount see her features, for indeed, he might recognize her.

Her heart thudded impossibly hard in her chest, and with no other choice, no possible explanation to give for her outlandish appearance, Mary gave a shove to the ebony-haired man and, with her path of escape clear, raced past him and into the night.

“Damn me.” The viscount’s gaze trailed after the ghostly female figure until she disappeared in the darkness. “Who was that?”

His brother lifted an amused eyebrow as he rubbed his sore, powdery cheek. “On my honor, I swear I have not the faintest notion. But rest assured, I intend to find out.”

The direction Mary dashed, unfortunately, was the exact opposite way from that in which she needed to go, which was only next door. Instead, she was forced through the back gardens, stables, and over the ivy-draped walls of no less than six town houses before she could slip down a narrow alleyway leading back to

Berkeley Square
and her great-aunt’s town house, where she and her sisters were lodging for the season.

As Mary pressed the front door closed behind her, she emptied her lungs of breath in a grand sigh of relief. She was home at last and, thankfully, fairly certain the viscount had not glimpsed her face.

Even if he had for the briefest of moments, with her body and sable hair coated with a thick layer of flour paste and powder, he could not have recognized her as the woman he tipped his hat to in Hyde Park each Tuesday while riding during the fashionable hour.

At least she hoped not.

The glow of a flickering fire illuminated the open doorway to the
parlor
, and she started for it, knowing she would find at least one of her sisters inside.

“
There
you are.”
Elizabeth
sat hearthside on a stool, combing the dampness from her newly washed, bright copper locks.