How to Resist Prince Charming 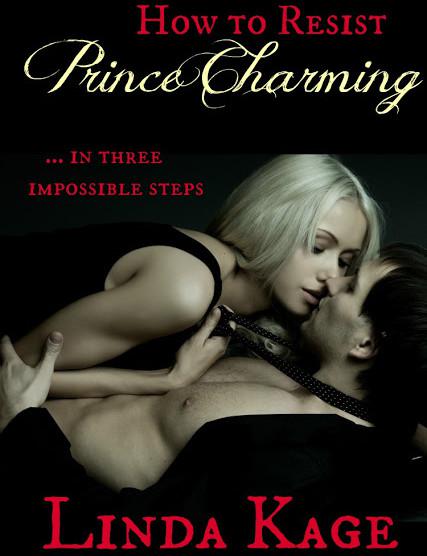 How To Resist Prince Charming

How To Resist Prince Charming

This is a work of fiction. Names, characters, places, and incidents are the product of the author's imagination. Any resemblance to actual persons living or dead, businesses or establishments, events, or locales, is entirely coincidental.

All rights reserved. No part of this book—except in the case of brief quotations in reviews—may be used or reproduced without written permission of the author.

Dear Kurt Karl, the absolute love of my life. Since you tried to trade me for a truck, I should probably dedicate this story to Denney.

But being that we're married and bound together ‘til death do us part, this one's for you. You're still my Prince Charming.

I would like to thank Claire Ashgrove, Jackie Bannon, Alfie Thompson, Jessica Damien and Karen King for helping make this manuscript readable! Thanks so much to Amber Skyze for the formatting tips, and to StanzAlone Design for the cover.

“You’re not actually wearing that to the party, are you?”

Lenna Davenport frowned. A second earlier, she’d opened her door with an anxious smile. Since her mom was stuck at home, nursing her thirteen-year-old sister back to health after a row with strep throat, Lenna had agreed to accompany her dad to his company’s Christmas party. And she’d actually been energized about getting in a little father-daughter time.

Anticipation dying a quick death, she rolled her eyes. “Why, not at all, Father. I’m just trying it on to see how it fits.”

He blew out a breath and swiped at his brow. “Thank God.”

“Dad!” She ignored the jolt of disappointment because he hadn’t immediately oohed and ahhed. “Of course I’m wearing it tonight.” Why would she be in it if she wasn’t going to wear it?
Hello
.

She hadn’t lived at home for six months now, yet to listen to him she would’ve thought she was still fifteen.

“It goes all the way to the floor.” She kicked out a toe to demonstrate. “Look. Even my ankles are covered.”

He didn’t bother to glance down. “I’m not worried about the length. It’s the overall effect that concerns me.”

Instinctively, she covered the bare expanse of skin below her throat with one hand, hoping he didn’t pick on its strapless factor. There wasn’t even a hint of cleavage.

“What’s wrong with the overall effect?” She bit her lip, wishing she didn’t sound so much like a pathetic kid desperate to please Daddy.

Why she’d always been so gung ho to gain his approval was beyond her. It was sad, really. She was twenty-two, and sometimes she still caught herself acting like she used to, aspiring to become his special girl.

Sucking in a surprised breath, Lenna beamed. Now that was more like it. She’d spent three hours picking out her dress so he would be proud to have her at his side tonight. It was nice to know her efforts had been worth it. She opened her mouth to thank him, but his next words cut her off.

“I don’t want my boss knowing how pretty you are.”

Huh? Lenna tilted her head and squinted her eyes. “You lost me. Why would Mr. Farris care what I—”

She faltered. “Heard what?”

Alienation swamped her. Though she went home most Sundays on “family night” to eat supper with her parents and siblings, she missed being a more integral part of their lives. Obviously, she’d missed something major.

Her dad wiped his mouth with his hand. When she saw his fingers tremble, she gasped. “What happened to Mr. Farris?”

She pictured the kind, fatherly man she’d met only a few times. He better be okay.

“He retired. It was rather sudden. And mysterious.”

Lenna’s jaw dropped. “What?” She hadn’t realized the president of Farris Industries was anywhere near retirement age. Spencer Farris couldn’t be much older than her father, and Tom Davenport was only fifty. “Who’s the new president then?”

She knew of three top executives at her father’s workplace: Pat Foley, Ben Hendricks, and her dad. The three men were terribly close. One of them must’ve taken over Farris Industries. Since it obviously wasn’t her dad, that could only mean one of his two best friends had just moved from coworker to boss.

She braced herself for the answer, but her dad’s response still shocked her. “Farris’s
son
took over.”

Wow. Her dad’s new boss was more than likely young enough to be his...well, his own son. She winced, knowing all too well how much her dad didn’t respect her generation or trust them to make any kind of responsible, executive decision. He had to be hating life right now.

“Oh,” she said, her bare shoulders drooping an inch. There went the fun evening she’d been all eager to have. Damn it.

Her dad didn’t reply, but moodily grabbed her coat off the back of a chair. “Let’s just go already.” Not meeting her gaze, he held open her jacket. “I refuse to give him any more leverage to use against me by being late to his precious event. I’ve already been warned insubordination is the leading cause of employee termination.”

Lenna’s eyes widened. That didn’t sound good. Nodding compliantly, she hurried forward so he could slip her sleeves snugly around her arms. Glancing over her shoulder, she sent him a worried look. “He can’t really fire you for being late to a party, can he?”

Pressing his lips thin, her father eyed her with distaste sparkling in his gaze. “Let’s not test it, shall we?”

Braxton Farris stood with a group of three older men, listening to them brag about their grandchildren. Braxton was a hell of a long way from the grandchildren stage. He hadn’t even hit married with children. Jesus, he was still light years away from just plain married.

Standing across from him, Pat Foley shook his finger Braxton’s way. “Enough talk about that. I bet we’re scaring the kid here.”

If only Braxton had a penny for every time they called him the kid, or boy, or sonny in the past month, he’d be a millionaire. Well…more of a millionaire than he already was. Behind his back, he knew he was called much worse. Boss Boy seemed to be the mildest but most popular handle. He refused to let it fester, though. He knew what he’d been signing on for when he’d stepped behind his father’s desk.

Well, sort of. It was still a shock to see how quickly they’d turned on him.

Brax treated the men to a tight smile. “Takes more than that to scare me.” He lifted his glass, only to find it nearly empty.
Perfect
.

“Just you wait your turn,” Charlie Fairbanks advised, beaming out an ornery grin as he jabbed Braxton in the ribs with a saggy, wrinkled elbow. “Then you’ll know exactly what we mean.”

“Sure.” He shot Charlie a look; not a frown, but something dry and annoyed enough to make the man’s smile drop flat.

Charlie’s face turned red, and he coughed into his hand. Their conversation crashed, exploded and floated off into an uncomfortable ball of silence.

Both Charlie and Pat shifted and snuck not-so-discreet glances toward the clock on the wall.

Braxton did as well, only to bite back a groan. It wasn’t even seven yet. He knew good and well these Christmas shindigs went on until the wee hours.

“If you gentlemen will excuse me,” he announced, backing away from the group. “I need to refresh my drink.”

His oh-so-respectful employees were in rare form tonight, trying to make him look as young and inexperienced as they assumed he was. Typically, they observed a little more discretion in person. But in casual party mode, soused and safe in numbers, their tongues wagged a lot looser. And Davenport, their rebel leader, hadn’t even arrived yet to stir up his usual trouble.

Braxton sidled up to the bar and ordered a Crown and coke. “Make it a double,” he pleaded, plopping onto the rotating stool before surveying the scene around him. Quite a few couples swayed to the lazy, slow tunes provided by the live band. But the only people around to dance with were employees or their dates, and neither option made an ideal partner. So, that killed half the fun he could’ve had.

He had briefly considered scrounging up his own date. But who knew what kind of gossip would spread about him if he’d walked in the door with a blonde bombshell on his arm. He’d probably go from Boss Boy to wild playboy, which would only give his dad a coronary, and he wanted to avoid that. The old man had enough on his plate already.

Braxton sipped his drink and idly watched the crowd for about the hundredth time in the past five minutes. He hoped he didn’t look as alone as he felt.

Earlier, he’d wandered toward the group of people who
were
his age. But that ended up being a dud. Anyone who was remotely as young as Braxton was so fresh and new to the company they had no rank yet. They were merely assistants, mailroom workers, and interns.

As soon as the high and mighty Boss Boy entered their circle, all conversation dropped flat.

It sounded like they’d been having an entertaining discussion too. As he approached, he saw one guy cupping his chest with both hands, obviously talking about female breasts. A fan of female breasts, Braxton neared them with interest.

But as soon as he’d called a greeting, all eyes went wide and every mouth snapped shut. Gazes fell to their drinks while only a few managed to mumble hello. Other than that...nothing.

Realizing he wasn’t welcome, Braxton thanked everyone for coming and moved along to the higher-up employees, where he’d found himself joining a discussion about retirement funds, then listening to a heated debate over what was the best liquid in which to soak false teeth.

Knowing more about false teeth than he ever cared to, he tossed back a good portion of his drink and blew out a long breath, hoping he could make it through the rest of the night. Not used to being the most unpopular guy in the crowd and knowing everyone was badmouthing him, Braxton sighed.

He was contemplating escape when he spotted her.

And she was young...like him.

Who was she? Where had she come from? What was she doing here? Braxton didn’t know and, frankly, he didn’t care. All that mattered was finding a way to get inside her as soon as possible.

He hadn’t arrived with a blonde bombshell on his arm, but by God, he sure as hell wouldn’t mind leaving with one.

Dayum
. She was gorgeous.

With a slender, tall frame that was somewhat willowy despite the healthy curve to her hips, she held herself with a graceful, poised stance that screamed dancer. He was too far away to tell whether she had a decent chest, but at this point, her cup size didn’t even matter.

Her dress was silver. Light reflected off it, making her sparkle as she stood in the doorway, peering curiously inside at the mingling crowd.

She’d pinned up her light hair, making her neck appear long and incredibly elegant. A stray blond tendril had come undone, or maybe she’d deliberately left it down. It teased the side of her throat and fluttered in a provocative manner, leading Braxton to believe she'd left it down for that intended purpose. To drive him mad.

Her cheeks looked longer than they did round. From this distance, he couldn’t see much, but he could tell her mouth was tipped in a smile.