Read How Do Firemen Make Love (Flame On) Online

How Do Firemen Make Love (Flame On) 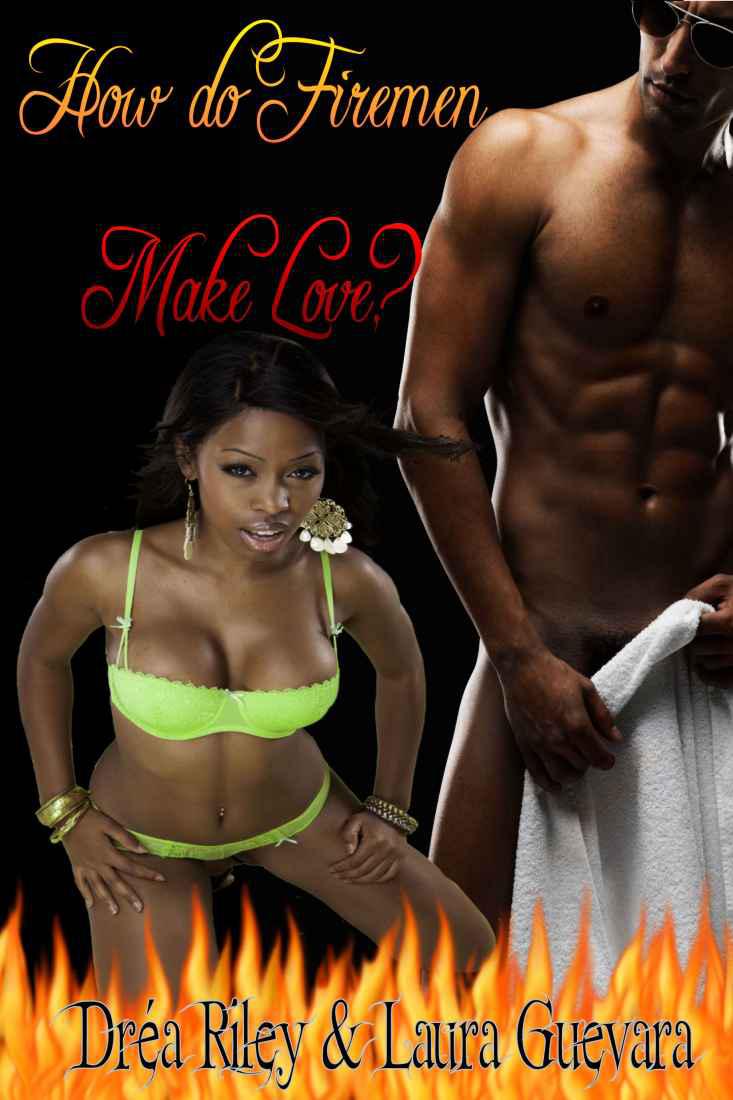 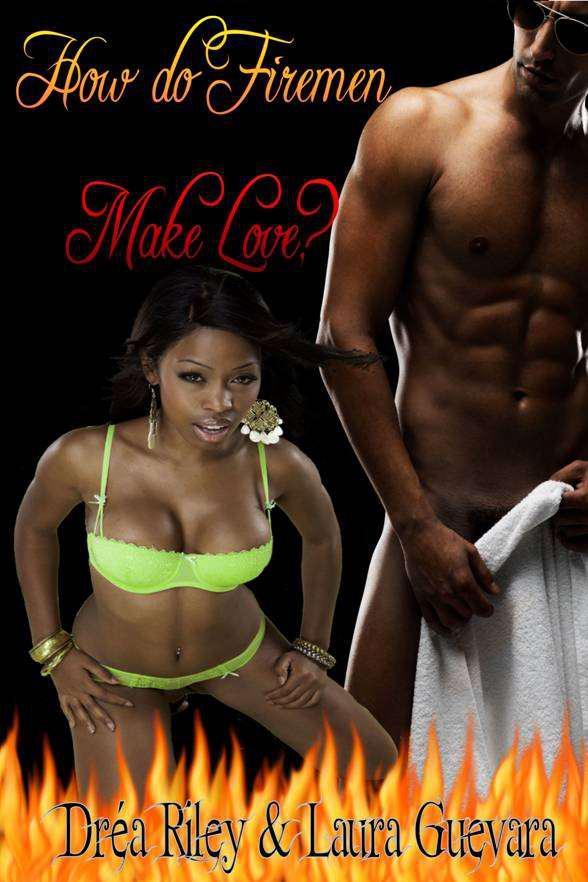 How Do Firemen Make Love?

The following characters are copyrighted and used with permission: Shara Azod by Shara Azod.

No part of this book may be produced or shared in any form, including but not limited to: printing, photocopying, faxing, or electronic transmission, without prior written permission from the authors. This book is a work of fiction.

References may be made to locations and historical events; however, names, characters, places and incidents are the products of the authors’ imaginations and/or used fictitiously.

Any resemblance to actual persons (living or dead), businesses, events or locales is either used fictitiously or coincidental.

All of the characters are copyrighted by and used courtesy of the respective authors in this anthology.

Originally, this book was part of the
Flame On!!!
anthology.

Each story has the same jump-off (a few pages that set the scene), but all are stand-alone tales.

Women of such diverse, varied interests should balance each other out, making a vacation a safe, fun experience. Yeah, not so much with these chicks. Deciding that Las Vegas is the perfect place to get their shop on, their eat on and their adventure on, the Posse heads out. No one knew quite what to expect, but burning down a chunk of the Strip's most exclusive resort wasn’t it.

No one—not even their attorneys, pastors, and other off-kilter friends—could have foreseen that. While the Las Vegas Fire Department (LVFD) conducts their investigation of the blaze and the women who started it, the Posse is treated to tempting views of the gorgeous firefighters putting out the blaze.

For these women, talking their way out of trouble is as easy as the yummy specimens of the LV Fire Department are hard.

Someone yells “CHALLENGE!” and before you know it, these hot authors are creating fantasies inspired by the kinds of fires the hard-bodied firefighters could ignite in them.

This story has connections to the following stories:

This is what could really happen should various members of the Posse converge on one place at the same time.

“This was a damn good idea.” Yazmin sighed as she sank into the plush couch.

There were murmured sounds of agreement as seven of the eight assembled women relaxed from a round of marathon shopping. The annual Posse road trip just seemed to get better and better. This year they’d decided on renting a penthouse right on the Las Vegas Strip on the top floor, all amenities included. They’d even sprung for a full-time butler, who was at that very second unpacking most of the cargo they had acquired from the finest boutiques in Vegas.

It had been a productive day. Reid carefully inspected her new handbags, caressing the supple leather of a five-hundred dollar purse with reverence. Laura and Yazmin were rummaging through their many shopping bags with barely suppressed glee, while Jeanie and RaeLynn were discussing what should be on tap for the evening. Shara and Jayha were in deep discussions over the usual—world domination—when Reid suddenly exclaimed, “What the hell is Dréa doing?”

Seven pairs of eyes swung around just in time to witness something on the wall pop and glass spraying outward as Dréa jumped back, and then a glob of a flaming bluish-gray substance fell to the floor.

“Oh crap!” Dréa attempted to stomp out the flame, only to set her stiletto-heeled boots on fire. “OH CRAP!!!”

Yazmin was the first on the scene, yanking the boot down along with Dréa, who was now hopping on one foot, yowling about her favorite boots. The rest of the women sprang into action, running for bottled water to throw on the growing flames.

“Forget the water!” Shara yelled, watching the spot in the formerly immaculate carpet char. “She set the thermostat on fire. That is mercury; you aren’t going to put that out.”

The seven other women froze, looking at the diminutive despot as if she had lost her mind.

“Uh, explain this to us slowly and in simple words,” Jayha, Fearless Leader and Mistress of the Universe quipped, her hand still on the cap of the water bottle she held at the ready.

“Mercury is incredibly difficult to put out,” Shara mused, tilting her head to watch the flames burn clear through the carpet to the bare floor underneath. “And it’s toxic.”

It took about sixty full seconds before the Posse were out the door and running full tilt down the stairwell—well, after a quick stop to yank the butler out of the room with them.

“He is just too fine to let burn up,” Yazmin had lamented on the way out the door.

Three hours later, not one, not two but three firehouses had been called to the posh hotel to attempt to put out the fire that had burned straight down. Luckily, it didn’t seem to spread outward, but it certainly was working its way downward. Most of the hotel guests were completely in the dark, wandering around outside the hotel where they had been relocated or muttering about being disturbed as they shuffled off in search of a casino that wasn’t closed down due to some mysterious smell.

The Posse, however, were surrounded by official-looking types determined to know what exactly had happened and how the thermostat had spontaneously combusted. Dréa was dong her damnedest to try to explain how exactly the mercury had jumped from the thermostat to come into contact with her lighter.

Shara shook her head and decided to concentrate on the yummy fire chief instead. He was older, with a light sprinkling of gray at the temples while the rest of his hair was jet black. His eyes sparkled with suppressed humor he probably wouldn’t dare let loose due to the gravity of the situation, which she could totally understand. But there was definitely some devilment there. Interesting. He was really, really tall, probably around six five maybe, with a nicely muscled, wiry frame. Nice.

“Stop ogling the fireman,” Jayha hissed at Shara, watching her watch him like a seven course meal.

“Can’t help it, he is so damn delicious.”

“Please don’t encourage the despot,” Reid groaned, shaking her head but knowing it was no use.

“Shara, you can’t have the fire chief.” RaeLynn patted Shara on the head, trying to stem whatever scene might be coming their way. “We are kind of in a little trouble here.”

“I think you should bite him,” Yazmin chimed him. “I dare you—no, I
triple
dog dare you!”

“Yaz, you are not helping,” Reid snapped, but too late.

“Challenge!” Shara bellowed out, causing no less than ten firefighters to stop and stare in their direction.

“No, she didn’t just yell out challenge for all the world to hear.” Jayha’s voice was more whispered awe than chagrin. Secretly, she loved it, but she had to at least pretend to be the sensible one; she was the Fearless Leader after all.

“We have to do it!” Shara was bobbing, honest to goodness bobbing like a kid, her hands clasped together, glee written all over her face.

“Do what? I want to do it!” Jeanie bobbed right along with her. “And does it involve the MGM lions?”

“NO!” The answer was immediate and unanimous, even Dréa stopping her jumbled explanation of the accidental mercury fire to join in the universal reply.

“I mean, we totally have to give them stories,” Shara hastily clarified before Jeanie could skip off to collect another dangerous animal (there was a polar bear incident once…). “All these glorious examples of man flesh…we owe it to our readers, to ourselves, to do this situation justice.”

“Uh, no.” RaeLynn shook her head. “First of all, we don’t have our computers with us. Secondly, no.”

“I don’t know,” Laura spoke up. “Looks like we aren’t going anywhere for a while. We could just entertain one another.”

“Or we could start another fire at a different hotel,” Yazmin pointed out.

“Shara, it was your idea, so you start,” Jayha cut Yazmin off quickly, noticing a few queer looks from firemen passing by.

“Okay, I think I will start with the fire chief….”