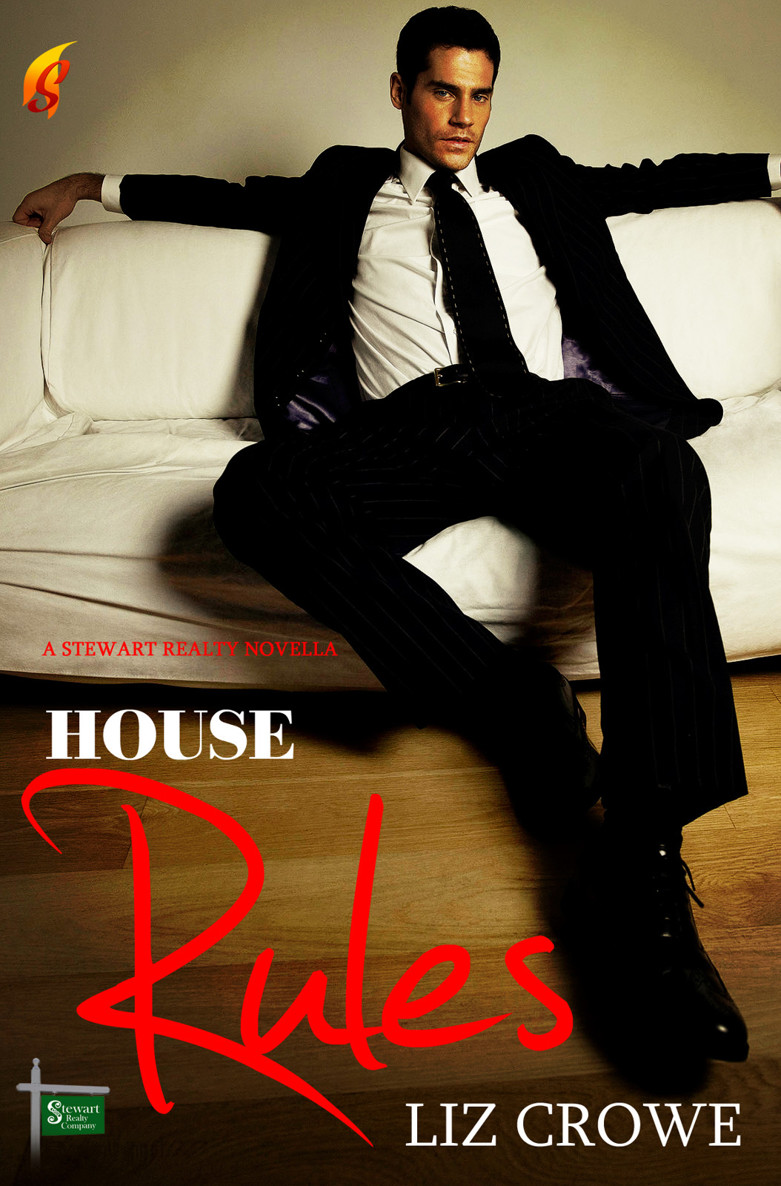 A
Sizzlin’
Book
published by permission of the author

This book, or parts
thereof, may not be reproduced

in any form without
permission.

a division of Tri Destiny
Publishing

This eBook is licensed for your personal enjoyment only.
They may not be re-sold or given away, except as provided in promotions
sponsored by Tri Destiny Publishing or the author. If you would like to share
this book with another person, please purchase an additional copy for each
recipient.

If you are reading this book and you did not purchase it,
win this copy during a promotion or, if not purchased specifically for your use
only, then please delete this copy, notify us at [email protected]
We encourage you to purchase your own copy and support the author’s hard work
in their craft.

The
young boy was on the cusp of manhood that day.

The
day he wandered into his kitchen, hung over, hungry, mad at the girl who’d
teased him all night yet wouldn’t let him past second base no matter how hard
he begged. Plus as a bonus, he was already late for basketball practice.

It
was also the day his mother died. When he stepped into the room lit only by
weak sunlight, rubbing his face and wondering if he could squeeze in a shower,
or if he should just go straight to the high school gym and beg his coach’s
forgiveness, his foot met something that was not a chair leg or anything else
that made logical sense. He stopped, looked down, and saw her. His brain
quickly flipped through events even as it attempted to process what his eyes
registered.

He
dropped to his knees and rolled her over, his lovely, quiet, smart, and
creative mother—the first woman he’d ever loved and would always love, as is
the way of boys, despite his frustration at her willingness to put up with his
father. Her eyes were open, face drained of all color but for the dried vomit
on her cheek.

The
boy’s hands shook. Anger swelled in his chest. He brushed at the crustiness on
her face. Raw fury made his vision dim. How dare she? What the hell was she
thinking? How could she give up on herself, on him, on their family?

Eyes
burning, his entire body shivering,  he picked up the phone and called the
ambulance. When they arrived he backed up, fast, then sat on the floor, tears
streaming as he watched the paramedics try to revive her.

They
kept asking him how long she’d been like this, as if he knew. As if he could
have known, sunk so deep into his own selfish bullshit the night before. No one
knew how long she’d lain face down in her own puke.

He
swiped at the embarrassing tears, unable to stop crying. His mother was dead.
On her own scrupulously clean kitchen floor she’d lain while he fucked around,
got drunk, tried to get in some girl’s panties. He had failed her when she
needed him. Not that she would ever ask for help. No, that was not her way.
Silence, stoicism, extreme organization, and tidiness—that was her method
against the madness that had become her marriage.

His
chest hurt so badly it frightened him. He heard a sob, and when one of the
paramedics glanced over at him, he realized it had burst from his own lips.

He
looked up when he heard the front door open. The sight of his father forced
fresh fury down the boy’s spine, coalescing in his freezing cold fingertips.
His father’s face, when it appeared at the kitchen door, was full of shock. The
asshole had the nerve to actually be surprised by his wife’s condition.

“You
did this,” he growled, not even recognizing his own voice. His hands formed
fists of their own accord, and he leapt across the kitchen, his finely tuned
athlete’s body giving him strength and his rage motivation. He could hear his
father’s sharp voice, angry and demanding. Saw the fear in the man’s eyes as he
looked down at his dead wife. He barely registered the sight of his sister,
standing slightly behind the man in the doorway.

Then
the father looked over and met his son’s gaze. The sickeningly familiar sneer
was all it took to turn what could have been a simple punch thrown by an
unhappy teenaged boy into a beating that it would take John Gordon Senior weeks
to fully recover from.

“Jack!
Stop it! Daddy!” The young girl jumped onto her brother’s back at one point,
yanked at his hair, scratched at his face. “Stop it! Please!”

There
was no stopping Jack. The grown man now no longer fought back, but cowered and
tried to cover his face with his arms. He made no sounds, didn’t beg for his
son to stop, but his hard blue gaze said it all. Reminding the young man of all
he hated about his father from the time he could remember having feelings about
him.

He
kept hitting. Finally, one of the paramedics yanked the boy off and threw him
halfway across the room to get him to stop.

He
sat, chest heaving, staring at the utter fucked-up mess that was his
family—dead, puke-covered mother; bloody-faced father groaning in pain in the
opposite corner of the room. A small sob caught his ear, making his inner
caretaker rise to the surface. Tamping down anger, he stood and went to his
sister who stood gripping the doorframe.

He
glared at them all, took her hand, and walked out of the room, soothing her
while swearing on all he held holy that he would never speak to his father
again.

“John
Patrick…John Patrick Gordon.” Someone smacked his face, tugged his hair. He
grunted and rolled over but woke when his nose met the hard back of his
grandmother’s couch.

He
sat, put his feet on her cold hardwood floor and stared down, trying to get his
bearings. The pounding in his head matched the sensation of his heart, beating
somewhere up in the area of his throat, which felt like a stretch of desert. He
groaned when his grandmother, the petite, perky and brutally controlling woman
whose son Jack had pounded to a pulp not two weeks ago, smacked his ear so hard
he would hear ringing for hours.

“Ow,
shit!
Maimeo
… Jesus.” He rubbed his head but wouldn’t meet her gaze. His
knuckles burned even now, and he could still feel the sickening crunch of his
father’s cartilage underneath them.

“Don’t
you try and charm me with your smart mouth, ya great heaving lump….” She stood
over him, arms crossed; her lingering Irish lilt ramped up by her anger at
finding him in his current condition.

Her
deep blue eyes bored into him, hard, so hard he had to look away and rub the
back of his neck, trying not to look so completely hung-over. “You reek of
whiskey, boy. You think acting like this is doing yer dear departed ma any sort
of service? Hmm? And yer da? What about him? When are you gonna get up off your
arse and make up with him? I can’t have ya here on my couch forever.”

Her
eyes softened when she sat in a chair across from him, ankles primly crossed,
fingers threaded together on her knees. Her voice softened, as did the brogue.
“John Patrick. You are such a good boy. Don’t be turning to drink now, so
young. It’s….” She bit her lip and looked away then back at him, the brief
emotional moment passed. “It’s a weak copout. One I let your father get away
with but one I refuse to allow you to use. No excuses.” She jumped up, grabbed
his ear, and yanked him to his feet, shoving him ahead of her as he yelped and
tried not to puke on her carpet.

“Get
in the shower. I’m making your sister a big breakfast and you, me fine young
boyo, are gonna be joining us. Go on, hurry up.” She shoved him into the small
bathroom and slammed the door.

Jack
sat on the closed toilet lid with its fussy, fuzzy cover matching the rug under
his feet, their nearly neon, sea-foam green the same as the shower curtain and
the tiny guest towels alongside the sink. Pressing his fingertips into the
bridge of his nose he counted to ten, then twenty. Then, figuring he was past
the vomit urge, he stood and cranked on the shower.

Spirit of the Place (9781101617021) by Shem, Samuel
A Ghostly Affair: A cozy mystery series (Death by Chocolate Book 3) by Pat Amsden
Don't Say a Word by Rita Herron
The Mad Lord's Daughter by Jane Goodger
Every Little Kiss by Kendra Leigh Castle
Flash Virus: Episode One by Steve Vernon
The Secret Knowledge by David Mamet
Everlasting Hunger (The Hunger Mate Series) by Dorsch, Brandy
A Mother in the Making by Gabrielle Meyer
1 Sunshine Hunter by Maddie Cochere