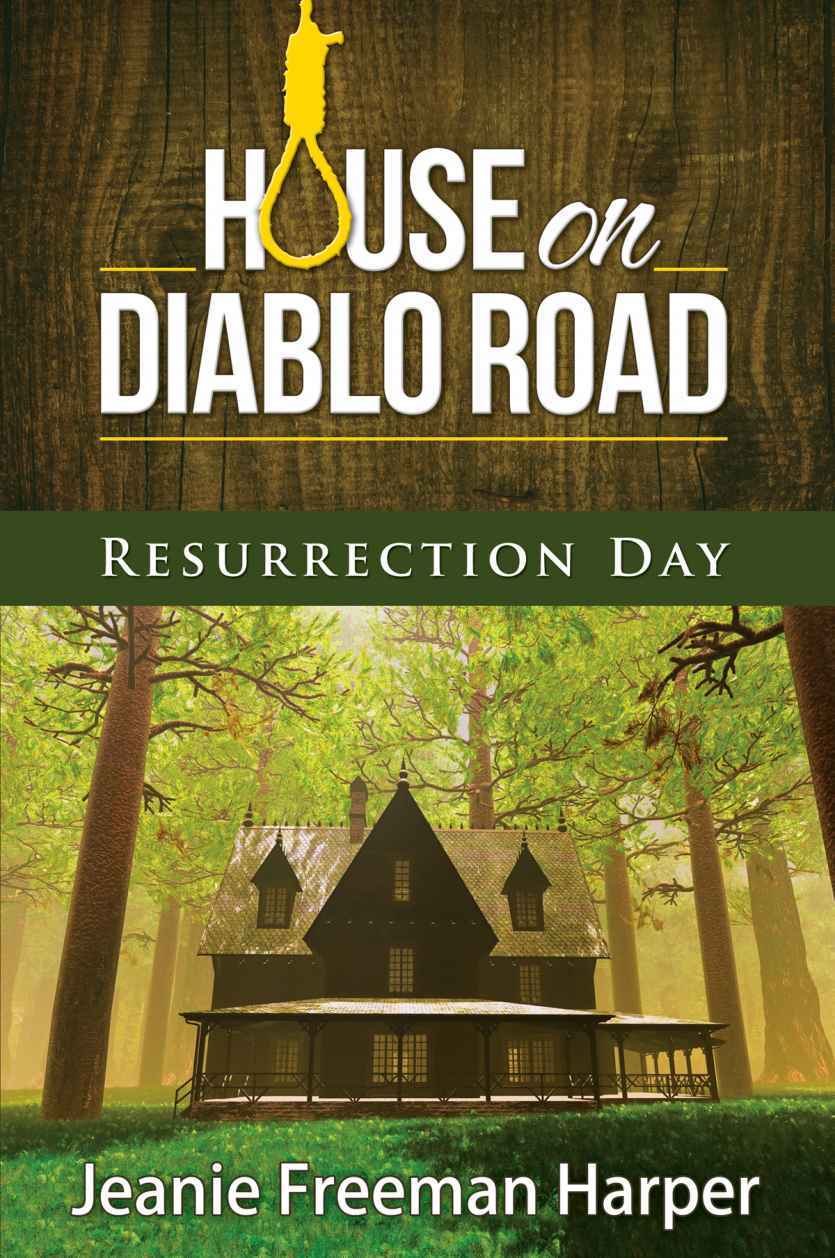 That particular day seemed quite ordinary in the beginning. Yet it heralded the coming of an intangible force closing in around the McCann family
—
there in a quaint place called Morgans Bluff. Unseen changes were coming to a town where secrets stayed buried for generations.

Noontime, that day had begun with a search. Worried and weary, Annie Morgan McCann limped into her kitchen and plopped down, where the mid-day meal grew cold on the table. She had trudged through the pine thicket and along the nearby shores of the Big Muddy, in a frantic search for her youngest son. When she checked the stall and saw that he had taken his pony, her heart sank. There was then no doubt that the boy was off on one of his secret escapades. Only this time, eight year old Tobias had not come home for his lunch, and his absence at the table was unusual indeed.

The old lumberjack Buck Hennessy piled the roast beef on his plate, but then, feeling his stomach churn, pushed the food away. “We mustn’t worry about him, Annie. The boy’s got a wild streak, but I reckon he'll outgrow it. I’ll go look for him, and I may give him a sound switchin’ when I find him.”

Annie stood up with arms akimbo and eyes aflame. “You’ll do no such thing, as long as I have breath left in my body. I'm obliged that you want to help, but you are getting up in years.”

Buck had heard that a lot lately, and it didn't sit well with him. Everyone wanted to put him out to pasture. It was enough to make him lose his notorious appetite, although there was one at the table who seemed unfazed. Seventeen year old Calvin was digging in. Buck grabbed the boy’s plate and his attention all in one swoop. “Tell me where your little brother is. I’ll bet a Yankee dollar you know.”

Cal shrugged. “You might try that old house past the thicket. It's the one where nobody lives, except a troll the guys talk about. Tobi’s gone haywire lately. He said he was going to look for the freak…‘Old One Eye’ he called him.”

By now, Buck was in no mood for trifling. He knew which house, and the thought of Jesse and Annie’s boy anywhere near it made his pulse pound in his ears.
Not there,
he thought.
Anywhere but there.
He swung himself up on his one leg, braced himself against the chair and went nose to nose with Cal. “Why would the boy wanna go all the way out yonder? What befuddled ideas did you hammer into his head.”

“
Beats me. He's nothing but a little blockhead.”

Buck cuffed the back of the boy’s head. “Watch your mouth. Now. If it’s the house I’m thinking about, it's posted against trespassers. That means Tobi's probably in some trouble, and I need to help him.”

Upon hearing that remark, Annie ran to crank up the telephone. “No, wait. I’ll call Jesse at the mill, as much as I hate to. He’ll be fit to be tied.”

“
Hang up, Annie,” Buck growled. “Ain’t no need. Let me see what I can do first. I know the place, and I’ll drive my Lizzy out there. It’s a ways out, so don’t expect me back too soon.”

He grabbed his cane and pushed himself up to stand precariously on his one leg.

Annie fumbled to untie her apron strings. “I’m coming with you.”

“
No you won't. I’m his godfather, and it’s
my
place to take care of him when his Daddy ain't here. You stay, in case he comes home. Besides, he needs a man's hand, and you’ll only coddle him the minute you see him.”

So it came to be that the ancient warrior chugged off in his worn out Model T on a mission of mercy, to a place he said would never return. He had sworn to God he never would.

The wheels of the Lizzy thumped along over Deadman’s Bridge, across Caney Creek, past Morgan-McCann Mills, where Jesse and daughter Katie were tending to business. Buck slowed his speed while deciding whether to change his mind and enlist Jesse in the search. He decided against it, since the boy had been missing but half a day. He knew Jesse would be irritated if he were told of his boy’s latest escapade. Jesse was in favor of a firmer hand than Annie had the heart to apply.

I'll not stir up that hornet’s nest today
, Buck decided.
Not ‘less I have to, anyhow. God
give me strength to go back to that house of misery. That boy needs rescuing.

By the time he entered the thick piney forest, he was on the narrow, weed-choked trail called Diablo Road. “No Trespassing” signs were posted every hundred feet, until at the path’s end, he came to the house.

There it is. Hasn’t changed much in all these years, but it’s the only thing that hasn’t.

The old logger's mind returned to Civil War days when the place had belonged to Cyrus McCann. It was now in the hands of the Bonney family. Still, it was much as it had always been—a structure of mixed styles, with wide wraparound verandas, gables and spires. The place left an impression, good or bad, on everyone who saw it, not for grandeur
—
which it didn’t possess, but because of a peculiar and mystic quality. It was as if the house exerted a magnetic hold on those who entered.

Buck gritted his teeth, determined to complete his mission.
Once I find the boy, I’ll be gone from this vile place, and the good Lord willing, I’ll never have to lay eyes on this place again.

He shut down the engine and looked up to the steep roof where a half dozen buzzards peered down into the high grasses in their search for death and decay. He caught the vultures’ eyes and shuddered, as a dark cloud drifted across a brilliant mid-day sun. “I ain’t dead yet!” he shouted. His voice echoed off the hills and died in the darkness of the forest floor.

When he shifted his gaze to the porch, he spotted the boy peeping into a front window. The sight of the recklessness of youth made Buck swear—as much from fear for the child as anything else. Through the slanting rays that filtered through the house, Buck could make out a shadowy figure moving toward the door. In the old man’s slow but frantic attempt to unload himself, he watched helplessly as Tobi hopped down and slid into the crawlspace.

By the time Buck scrambled for his cane and heaved himself out, a tall, raw-boned man filled the doorway. There stood the caretaker, with one owlish eye and an empty socket bared like a badge of defiance. The man leaned over the edge of the porch, and through clenched teeth, ground out his words like grist. “You take your life in your hands, boy. Come out and face me. Tell me who you are.”

Tobi slid out, brushed himself off, and looked up at the man in wide-eyed innocence. “I’m Tobias McCann.”

“
I don’t know your papa personally, but I know he’s supposed to be an upstanding citizen. As such, he should’ve taught you better than to go where you don’t belong. I’ve a good notion to take a switch and tan your hide.”

Tobi swallowed hard and jutted out his chin. “No sir. My daddy says he's the only one who can switch me, and even he won't if my mama’s around.”

The man stepped forward and raised and opened wide a claw-like hand. “A mama's boy you are then. She's not here to save you now.”

At that moment, Buck’s booming voice split the air like thunder, and the vultures fled their perch and flew to the tops of the trees to watch in safety.

“Buck Hennessy here! You’ll not lay a hand on that boy. Tobias, you get on home. Where’s your pony?”

The boy turned and looked up with those sky blue McCann eyes beneath that curly mop of auburn hair, and Buck’s anger dissolved before Tobi could open his mouth. “Something was prowling around behind us, and it spooked Shadow. He took off for the woods. What's gonna happen to him out there by himself?”

“
Shadow can find his way home. That’s what they call horse sense. Now don’t start tuning up to squall.”

Then the man turned his baleful eye to Buck: “If you ask me, that pony’s got more brains than this boy.”

“
I’ll advise you to hold your tongue. We’ll see to it that the boy stays away from here. Don't you worry none about it.”

“
You tell Jesse and Annie McCann to keep their muley spawn off this land. It makes no difference that this place was once owned by one of the their kin. It’s been in the Bonney family for a long time, and the Bonneys don’t associate with the kinfolk of a Civil War deserter like Cyrus McCann...even if he did build this place as his own.”

Buck gave Tobi a gentle push toward the Lizzy and bowed up to Crow like an elderly tomcat in his last show down. “Cyrus McCann was my good friend, and he did
not
desert the Confederate Army. He was executed for no good reason. Mister, I outta knock your rotten teeth right down your gullet.”

“
You couldn’t whoop me, if you were twenty years younger and had
both
legs.”

“
Then I’ll say good riddance to you, and keep the boy off this property.”

“
That I will, but you have to know he's just an adventurous kid. He’s heard those spook tales same as everybody on this side of Texas.”

The caretaker leaned closer and opened his eye wide. “Then he should know enough to stay away, and the same goes for old men like you.”

With great effort, Buck kept his fists at his sides but let loose with a stream of tobacco spit before turning back to Tobi, who was now hovering inside the Model T. Seeing the fierce old man's retreat, the buzzards returned to their perch and watched, as he hoisted himself behind the wheel and drove away. Crow’s laughter followed them, and it was a crackling like the fires of Hades, burning Buck’s ears and singeing his pride.

Rosko, Mandy - Mate of the Wolf (Siren Publishing Classic) by Mandy Rosko
Emerald Sky by David Clarkson
Personal Demons 2 - Original Sin by Desrochers, Lisa
Sunkissed by Daniels, Janelle
i 0d2125e00f277ca8 by Craig Lightfoot
Cyborg Strike by David VanDyke
The Cat Who Walks Through Walls by Robert A Heinlein
Dreamstrider by Lindsay Smith
Changeling Dream by Harper, Dani
Harlequin Historical May 2014 - Bundle 1 of 2: Notorious in the West\Yield to the Highlander\Return of the Viking Warrior by Lisa Plumley