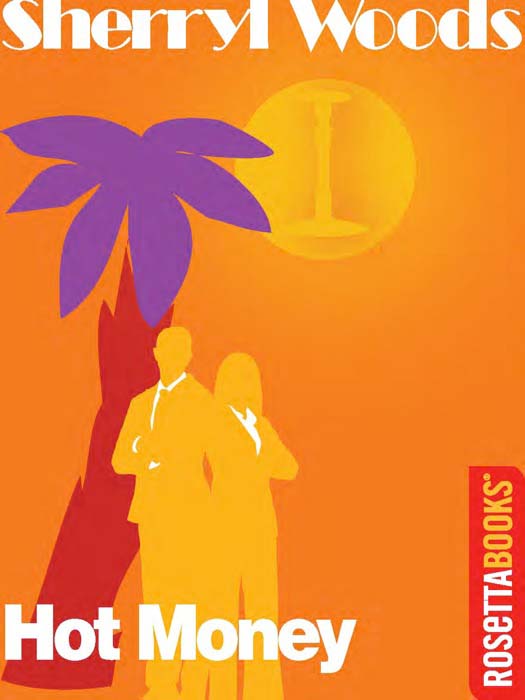 Here in Sherryl Wood's Hot Money, the third in the Molly DeWitt Romantic Mystery series, Molly DeWitt and detective Michael O'Hara investigate the murder of Tessa, the chairwoman of the "Save the Environment" black-tie affair. Molly and Michael are in attendance at the posh affair at the insistence of Molly's friend, Liza, who was one of the organizers for the event. But when Molly and Michael sneak away from the party to sit quietly on the dock for a while, they discover the body of Tessa Lafferty, a wealthy socialite, floating on the water.

As the two investigate the mystery further, they discover that Tessa was not only not very politically correct (despite her obvious involvement with the Save the Environment party) but more, that she had many sexual partners and was none too discriminating. The plot is set for Michael and Molly to investigate and try to solve the mystery as they also continue the subplot of their own relationship.

Sherryl Woods is the creator of two mystery book series, the Molly DeWitt Romantic Mystery series and the Amanda Roberts Mysteries. Each of these was optioned for television. Woods first began publishing in 1982 under the names Alexandra Kirk and Suzanne Sherrill. Since 1985 she has published under her name Sherryl Woods and has more than 110 romance and mystery novels to her credit.

The Molly DeWitt and Michael O’Hara series of books present an excellent and intriguing series of detective stories that also weave in elements of romance and intrigue for the curious reader. Here you’ll find plots that are relevant to the modern world ranging from the Cuban Revolution to Hollywood stars and rehab to simple murder to Save the Environment affairs where murder occurs and the detective duo must solve the case. The chemistry between DeWitt and O’Hara works for not only are the two complimentary “brains” but also the sexual tension between the two creates a third element that keeps us on our toes and keeps us turning the pages to see how they manage all elements combined. Woods is a skilled writer, deftly managing to weave elements of romance and crime fiction in a single source plot.

All rights reserved. No part of this book may be reproduced or transmitted
In any form or by any means, electronic or mechanical, including photocopying, recording, or by any information storage and retrieval system, without the written permission of the Publisher, except where permitted by law.

Nature is pleased with simplicity, and affects not the pomp of superfluous causes.

In August 1992, Hurricane Andrew swept through the setting for Hot Money. Vizcaya, the elegant estate in which the opening scenes take place, suffered more than three million dollars in damage. A twelve-foot surge of water from Biscayne Bay flooded the grounds, wiping out the electrical system and air conditioning housed in the structure’s basement. Fortunately, the damage to the interior collection and the rooms described in this book was negligible. The grounds with their beautiful gardens were turned brown by salt water, but began turning green again within weeks. However, damage to exterior statues and the offshore barge required that skilled artisans be brought in to make costly repairs, according to Assistant Director Maria Llorca. Repairs to a single broken hand on a statue could cost as much as four thousand dollars.

Even those of us who fared with only minimal destruction (I had one window and a dining room wall blown out when wind blasted through the oceanfront condominium across the hall) now keep a wary eye on all storms forming in the Atlantic. None of us will ever take our paradise for granted again.

As always, I’d love to hear from you. Please contact me via email at
[email protected]
or via my website
www.Sherrylwoods.com.

As Molly DeWitt listened to two elegantly clad women scheme to take a Miami philanthropist to the monetary cleaners, she tried to recall exactly how her neighbor and best friend, Liza Hastings, had managed to talk her into showing up for this black tie charity affair. The last thing she remembered clearly was saying an emphatic no.

That had been a month ago. The next day the fancy, embossed invitation had appeared in her mailbox. A week after that, Liza had begun dropping pointed hints about her failure to reply, especially when the cause was so worthwhile—saving the spotted owls in Oregon and Washington, among other endangered creatures.

“I replied. I said no,” Molly recalled saying quite clearly.

The ensuing discussion about the responsibilities of friendship had lasted no more than one or two weighty moments. Then Liza had left her to wage a battle with her conscience.

It wasn’t that Molly had no conscience. It was simply that she’d grown up attending lavish affairs like this and had sworn on the day of her debut that she never would again. It had always seemed to her that if the women in the room had donated an amount equivalent to the cost of their gowns, there would have been no need for a fund-raiser at all. She could recall mentioning that to Liza on a number of occasions. Liza, unfortunately, had very selective hearing and a skill at arm-twisting unrivaled on the professional wrestling circuit.

The clincher, of course, had been Liza’s persuasive appeal to Michael O’Hara. For a hard-nosed, macho homicide detective, the man had the resistance of mush when it came to saying no to a woman as committed to a cause as Liza was. He’d looked shell-shocked as he’d written out his sizable check.

“What are we doing here?” he asked now as he nabbed another glass of champagne from a passing waiter.

Molly thought he sounded rather plaintive. She scowled at him. “We wouldn’t be here if you hadn’t succumbed to Liza’s pressure. You had your checkbook out and those tickets in your hands before she even finished saying
please.”

“You could have stopped me.”

“How was I to know you intended to drag me along with you? For all I knew you planned to ask that charming go-go dancer who was all over you at Tío Pedro’s a few weeks ago.”

He grinned. No, actually he smirked.

“Go-go dancer? Your claws are showing, Molly. Marielena is in the chorus of a Tony Award–winning musical on Broadway.”

“Besides, I was hardly likely to ask her when this is your friend’s event. I’m almost certain Liza indicated this was a package deal—you and the tickets, all for a paltry five-hundred-dollar contribution.” He groaned. “Do you know how many tickets to Miami Heat games I could buy with that?”

“I thought a former debutante would have an entire collection of ball gowns.”

“I do. In size four. I’m an eight now,” she said, giving him a warning glare, “and if you make one single snide remark about how I could have starved myself back into those fours, I will personally dump the next tray of champagne I see over your head.”

He regarded her curiously. “Are you always this charming at galas?”

Molly felt a momentary pang of guilt. She squashed it. “I get testy when I spend more than a week’s pay on a dress that with any luck I will not wear again in this lifetime.”

“At least you can save it for the Academy Awards or the Emmys, even the Miami Film Festival. Surely in your position with the film office sooner or later you’ll have to drag it out again. Where is a cop supposed to wear a tux?”

“Save it for your wedding,” she shot back. Considering Michael’s avowed status as an eligible bachelor, it was as close to a curse as Molly could come. The alarm in his eyes improved her mood considerably. She linked her arm through his. “Toss down the last of that champagne and let’s go mingle.”

Actually, now that she was beginning to resign herself to an endless, tedious evening of polite chitchat and lavish praise of the canapés, Molly discovered that she could appreciate the setting, if not the reason for her presence.

For the event Liza had commandeered Vizcaya, the closest thing Miami had to a palace. Built on a grand Italian Renaissance scale between 1914 and 1916, the former winter home of industrialist James Deering faced Biscayne Bay, which dutifully shimmered like a sea of diamonds under the full moon. A soft breeze, laced with the tang of salt air, swept over the estate. Most of the crowd was milling around under a striped refreshment tent on the south lawn or walking through the surrounding gardens, as formal and lavish as any in Europe, no matter that the gatehouse across the road now served as Molly’s own office.

The romantic setting was perfect for stealing kisses or seducing the high rollers into parting with their money. Molly caught sight of Liza amid a cluster of Miami’s well-to-do socialites, including the event’s chairwoman, Tessa Lafferty. They were all preening for the photographer from the morning paper. Liza’s dramatic, off-beat dress in a shade referred to as tangerine—at least in the produce section, if not on the fashion pages—looked as out of place in the midst of all those pastel beaded gowns and stiff hairdos as a bold bird of paradise would among sweet and fragile magnolia blossoms.

As she and Michael got close enough to identify the women with Tessa, Molly guessed they would ante up a good thousand dollars apiece before Liza let them escape. Most would consider it a small price to pay to have their friends see them on the society page a few days from now.

Molly watched in amusement as Liza went into her hard sell.

“How does she do that?” Michael asked in wonder as checks and promises changed hands.

“Liza has no shame when it comes to protecting the environment and any critter living in it. She will grovel if she has to.”

“How much do you figure an event like this will net?”

“Fifty to seventy-five thousand, maybe more,” she said as Michael’s eyes widened. “If Liza had actually chaired the event, she would have tried to lure a couple of celebrities into town. With a little star power and maybe one of those fancy silent auctions, she could have doubled the profits. A shindig like this in Los Angeles could pull in a cool million.”

“The soccer team raised seventy-five dollars at a bake sale last month and considered it a coup,” he said. “Why didn’t Liza go for the big bucks?”

“Because, as I understand it, the chairwoman did not take kindly to suggestions from her committee.”

“The chairwoman is an egotistical idiot,” Liza muttered under her breath as she joined them just in time to catch the gist of their conversation.

“She did manage to get all the uppercrust scions of the oldest Miami families to turn out,” Molly reminded her, pointing to the women who still surrounded the chairwoman.

“Sure, but she ignored the rest of the community,” Liza countered. “If a few of us hadn’t set out to corral people like you and Michael, we would have had to have a nurse on duty to hand out vitamins at the door or the whole crowd would have fallen asleep by nine.”

“Don’t you think you might be exaggerating just a little bit?” Molly asked. “You’re just miffed because you wanted Julio Iglesias to sing and she’d never heard of him.”