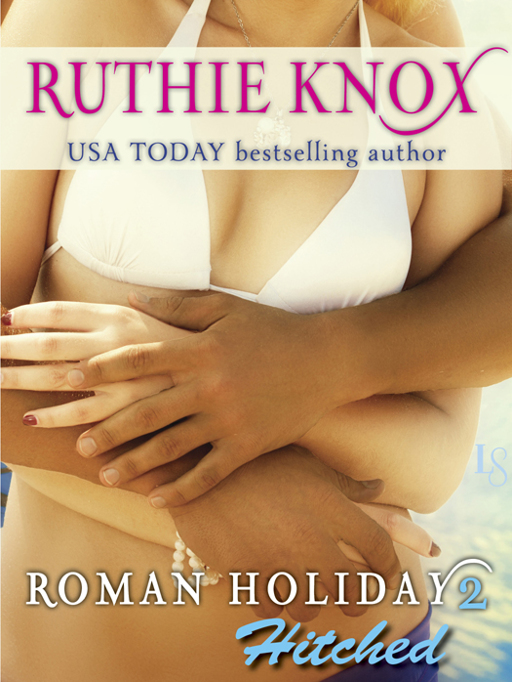 Roman Holiday 2: Hitched
is a work of fiction. Names, places, and incidents either are products of the author’s imagination or are used fictitiously.

Published in the United States by Loveswept, an imprint of The Random House Publishing Group, a division of Random House LLC, a Penguin Random House Company, New York.

LOVESWEPT is a registered trademark and the LOVESWEPT colophon is a trademark of Random House LLC.

This book contains an excerpt from the forthcoming book
Roman Holiday 3: Blindsided
by Ruthie Knox. This excerpt has been set for this edition only and may not reflect the final content of the forthcoming edition.

We’re back! Did you miss me?

But I bet you missed Roman and Ashley, at least a teensy bit. Admit it. You want to poke Roman in his fine washboard abs and find out if there’s any give. You can’t resist his flinty Roman-ness. And neither can Ashley, bless her adorable little heart.

Just in case you’ve come down with amnesia since last week’s episode—the affliction of many a romance heroine—here’s a quick recap: In a fit of idiocy, Ashley chained herself to a palm tree in the hope of rescuing Sunnyvale Vacation Rentals from the wrecking ball. Roman, the developer, left her sweltering in the sun, waiting for her to give up … until the imminent arrival of a category III hurricane forced them to negotiate Ashley’s removal and a plan that requires Roman to evacuate her from the Florida Keys.

Just when Ashley was free from the palm tree and Roman was congratulating himself on a job well done, Ashley informed him that he’d inadvertently agreed to drag her Airstream trailer along with them.

Then she kissed him.

Then she passed out.

Let’s see if I can top it … but first, can I top off your Rum Runner?

Awesome. You guys are the funnest.

P.S. The Roman Holiday forum? Have you? Because you should. I am. We all are.

Ashley tussled with consciousness for what felt like an eternity. She groped at it in that timeless, unending way of dreams, her need to emerge from sleep manifested as an empty ache between her legs, a yearning for her dream-lover that she couldn’t slake because,
God
, she’d been trying forever, but she couldn’t figure out how to get his zipper down and his jeans off.

And then the jeans were history—
success!
—and she was blinking futilely at the elastic band of his underwear, trying to remember what to do next. Incapable of pushing her own underwear either down or aside.

Another magical removal left them skin to skin below the waist, dark to light, her lover perched above her on his elbows and her eyes on the condom he held out to her. They passed it back and forth a few times, utterly baffled. Her frustration reached a fever pitch and held there, back arched, hips lifting, until finally,
finally
he moved inside her, and she saw the understanding and the rapture break over his face at the same moment he spoke.

It was Roman between her legs, inside her head.

No. It was Roman speaking on the phone from the other side of the room.

Ashley squeezed her eyes shut and opened them again. Fuzzy avocado green. A splash of orange. She knew this couch. It sat in the low cinder-block building that served as Sunnyvale’s office.

And the only way she could’ve gotten from the palm tree—the last place she remembered being—to this couch—where she most assuredly was
now
—was if Roman had carried her.

She’d passed out and woken up having a sex dream about her arch-enemy.

Worse, she kind of wanted to go back to the dream, because she could still
feel
him. That hot, thick slide. That moment of heavy-lidded, hazy recognition. Her whole body singing
yes, yes, this.

Ashley sighed, too, as if in echo, and registered her surroundings more completely. Roman on the phone by the front window. Her bare, aching legs stretched out on the couch. The soft brush of the chenille throw against her cheek, her exposed hip, her calf.

He’d carried her in here. Spread her out on her side, put a pillow beneath her head, covered her up.

How long had she been out?

“Sure. Yes. I’ve had a few wrinkles here, but nothing I can’t handle. I’m not going to make it to New York, though. I’ll have to ride out the storm here. Give me a call when you get in, or I’ll call you guys once I’m able to. It might be a few hours. All right. Bye.”

He turned around just as she sat up, which meant he saw her wince and press her fingers to the space between her eyebrows in a futile attempt to contain the throbbing pain in her head.

Some creature had crawled into her mouth and died. Possibly the very small, very stupid squirrel taxed with the job of safeguarding her good sense.

She’d
kissed
him. She’d made him swear an oath, and then he’d unlocked her and she’d kissed him, passed out, and had a desperate, vivid dream about how badly she wanted to have sex with him.

Which she kind of
did
now, even though that was totally cracked, and how was she supposed to get him to Georgia in these circumstances? How could she drag him to Mitzi, Airstream in tow, when she couldn’t even sit up without feeling like her brain was going to explode and dribble out her nose?

She couldn’t handle this. She couldn’t even trust herself to stick to the plan while unconscious.

“How are you feeling?”

When he raised an eyebrow, she had no idea how to respond. She attempted a smile, but her bottom lip cracked and started to bleed.

Ashley licked the blood away, wishing she weren’t such a mess. That she weren’t so itchy, filthy, her skin beneath her bikini and T-shirt clammy and her head weirdly elephantine, perched on top of her spindly little neck.

And while she was wishing, she went ahead and wished he hadn’t brought her to the office, too. She’d been avoiding it ever since she opened a file drawer and found it empty.

Everything was empty that was supposed to be full. The files, her grandma’s apartment, the storage area—nearly all of Susan Bowman’s personal effects had been swept off the face of the earth, leaving behind her furniture, the Airstream, and inside it a stack of boxes with Ashley’s name on them.

She’d opened only one and found in it nothing but a few folders labeled “Finances.” Tax records from the past decade. Title transfer documents that had taken Ashley half an hour to understand the gist of. A stack of quarterly rent receipts that went back two years.

Flipping through papers on the floor of the trailer, she had felt the pain of utter betrayal grow inside her until it was a pressure so intense that she’d been sure she couldn’t draw another breath without choking on the tears she was trying to repress.

She hadn’t been back in the office, Grandma’s apartment, or the Airstream since. Instead, she’d stuck to the little gardener’s cottage that had been her bedroom since Grandma converted it as a sixteenth birthday present.

She didn’t want to be here now—to be feeling the familiar nap of the couch under her legs or smelling ancient nicotine and Grandma’s phantom mint tea with every breath she took. It was all a little
much
at the moment, and Roman made it worse. Maybe it was the dream, or maybe it was the fact that he’d caught her and carried her inside, but he looked good. Not plastic-good, but wet-haired, dark-stubbled, frowning forehead
messy
good.

“You look awful,” he said, in that rich, vowel-tumbling voice of his. That voice that reminded her of the way he’d groaned in her dream, low and harsh and animal.

She closed her eyes and took a deep, cleansing breath.

Then she took another one, just in case the first one hadn’t been deep and cleansing enough to get her through this conversation.

“I could use a shower and a sandwich,” she said. “And some clean clothes. And about three days to sleep.”

“Yeah.” She braced a hand against the back of the couch and sat up the rest of the way, irritated with herself for about seven different reasons. For passing out. For being tired and
hungry. For being swollen and slippery between her legs, and for failing to shut down her insanely inappropriate arousal now that she was awake.

For being unequal to the situation. As always.

She lifted her hand and felt the ends of her hair. Still damp, but not dripping, and clumped into thick locks the way it did when it dried on its own.

She’d been out over a half hour, surely.

On the table behind her grandmother’s desk, a green ceramic mug steamed peppermint fumes into the air. Not phantom tea, then. Real tea that he must have made for her. The snack basket held microwave popcorn, chips, candy, and gum. Grandma had a weakness for junk food.

“I can get by with that tea and some popcorn, for starters.”

When she stood up, the throw fell off her legs, and the floor buckled. Or possibly her knees. She reached out a hand to brace herself against nothing at all and somehow ended up jamming her palm into his chest so hard, her wrist shrieked.

He had his hands on her. His bare hands. One at her waist, the other spreading over her ribs. Her shirt had rucked up when she fell, and the only thing keeping her off the floor was Roman’s hands.

She glanced down at her legs, traitorously intertwined with his. “This looks bad.”

“I know, but you caught me.”
Twice. Inside of an hour.

Not in my dream you weren’t.

She attempted to straighten her noodle legs and found that if she concentrated hard, she could stand up. “I think I’m okay now.”

He did. “What were you going after?”

She wanted to point out that she’d only just managed to get up, but his tone brooked no
argument, and she didn’t feel like putting up a fight.

She would pretend this was still the truce period. When they got on the road again, the truce would be over. Once he found out where they were headed, he would
kill
her.

But for now, she would allow him to make tea for her, and she would try very hard not to let it change anything.

It doesn’t matter how warm his hands are
, she reminded herself.
He has a cold, black heart.

“Half an hour,” he said. “We can spare that much. Then we have to get moving.”

Plenty of time to drink the tea and shovel some sugar, fat, and carbohydrates into her food hole. She’d eat, take a shower, and feel much better.

In half an hour, she could steal back the offensive, and Roman could return to being the worst thing that had ever happened to her.

The Airstream was a nightmare—a thirty-foot-long silver bullet with riveted seams that sat on a pad of gravel behind the office building, gleaming in the rain.